The Duke and Duchess of Cambridge are set to go head-to-head in a yacht race around the Isle of Wight next month – reviving a royal sailing tradition started by King George VI in 1827.

William, 37, and Kate, also 37, have already challenged each other to an ice-hockey penalty shoot-out in Sweden, raced each other at a London Marathon training day and gone head to head in a dragon boat race in Canada.

But now the royals, both known for their competitive streak, will go up against each other as skippers of individual sailing boats in Cowes on the Isle of Wight on August 9 this year.

The winning team will be awarded The King’s Cup, an historic trophy first presented by King George V at Cowes’s Royal Yacht Squadron in 1920.

The royals, both known for their competitive streak, will go up against each other as skippers of individual sailing boats in Cowes on the Isle of Wight on August 9 this year (pictured, Kate racing the New Zealand’s Americas Cup Team yacht in 2014) 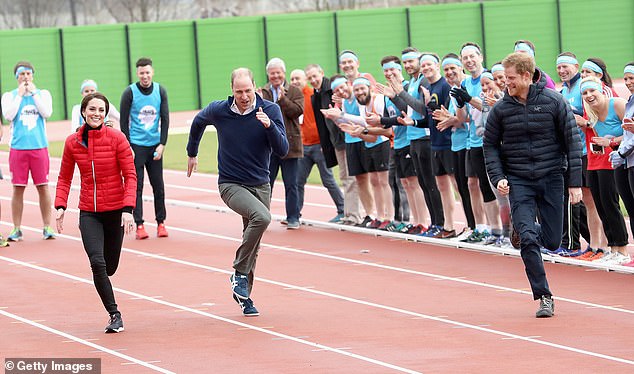 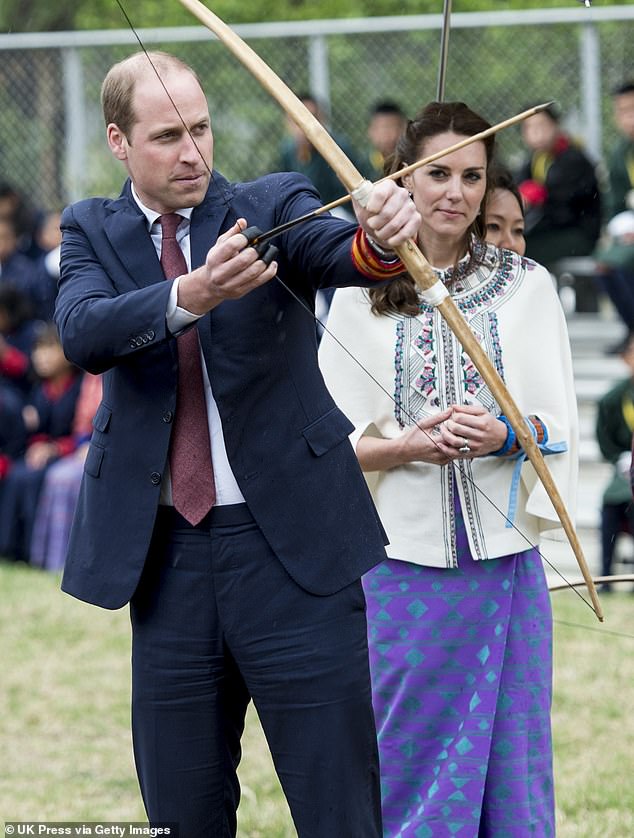 The Duke of Cambridge and Kate, Duchess of Cambridge, take part in a game of archery in 2016 in Thimphu, Bhutan 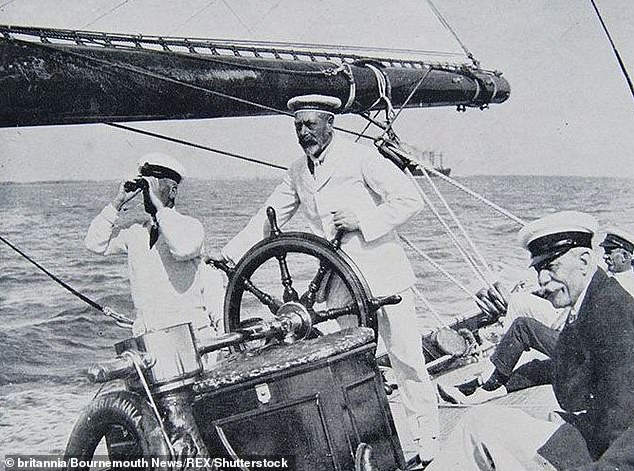 The winning team will be awarded The King’s Cup, a historic trophy first presented by King George V (pictured) at Cowes’s Royal Yacht Sqcuadron in 1920

Their involvement will revive a royal sailing tradition that dates back to King George IV – who reigned from 1920 to 1930 – and presented the a King’s Cup to the Cowes Regatta in 1827.

It has not been presented since 1950, when his son George VI replaced it with the Britannia Cup. But earlier this year, the Duke and Duchess of Cambridge revealed they are hoping to revive the tradition.

Members of the public are invited to watch the racing from grandstands on the shore, as William and Kate compete against one another and six other teams in state-of-the-art Fast-40 boats.

The Cambridges have been keen advocates of sport, undertaking work to highlight the positive impact it can have.

Kate has championed how the benefits of sport, nature and the outdoors can impact childhood development, and lead to improved physical and mental wellbeing.

This will not be the first time William and Kate have indulged in some sporty royal rivalry.

Whether it is Scrabble or sport, they both like to win – and they competed in a dragon boat race on Prince Edward Island in Canada on their first official overseas tour as a married couple in 2011.

William was victorious, but he gave his wife an affectionate hug after her team lost out by just a few metres. 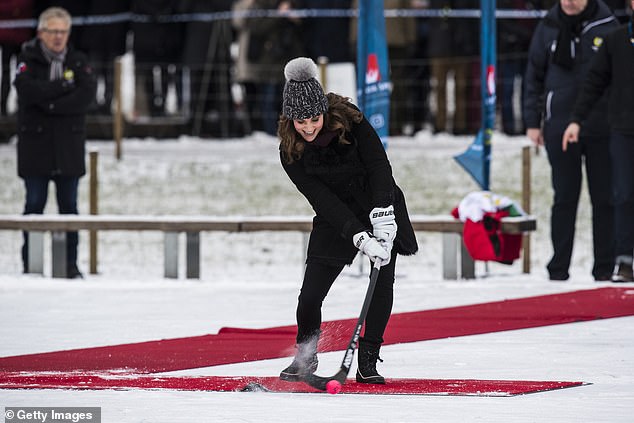 Catherine, Duchess of Cambridge, practices penalty shots with the Stockholm bandy team in 2018 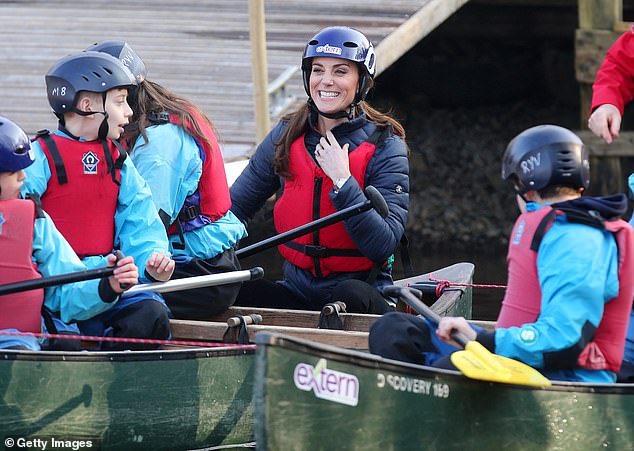 Kate (pictured) has championed how the benefits of sport, nature and the outdoors can impact childhood development, and lead to improved physical and mental wellbeing. 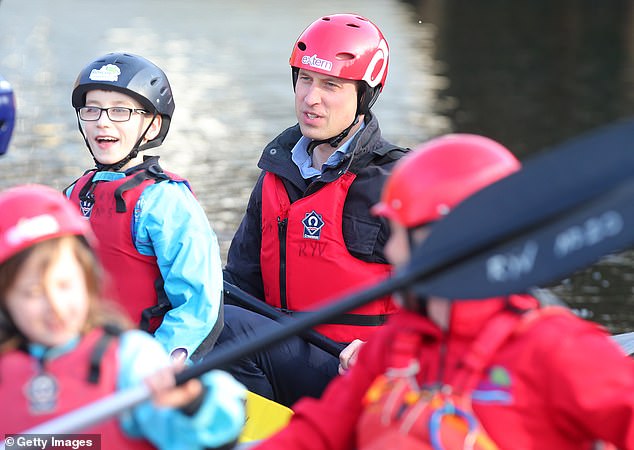 Prince William Duke of Cambridge and Catherine, Duchess of Cambridge (pictured), kayak as they visit Roscor Youth Village in Co. Fermanagh as part of their two day trip to Northern Ireland in 2019

In 2017, the couple faced extra competition from William’s brother Harry as he sprinted past them at a training session for runners taking part in the London Marathon.

William, who joked ‘oh my hamstring’ before the 50-metre race, came second and was closely followed by his wife.

But despite their determination to beat one another on the track, Kate, who wore a red jacket and black jeans, laughed and hugged her husband afterwards, while Harry patted William on the back.

In 2018, Kate was left glum-faced when she was beaten by William in a bandy hockey penalty shootout in Stockholm.

The couple joined a group of Swedish youngsters playing the game, which has a huge following in the country and has similarities to both hockey and football.

The eight boats taking part on August 9 will each represent one of the charities that are being supported this year by the couple. 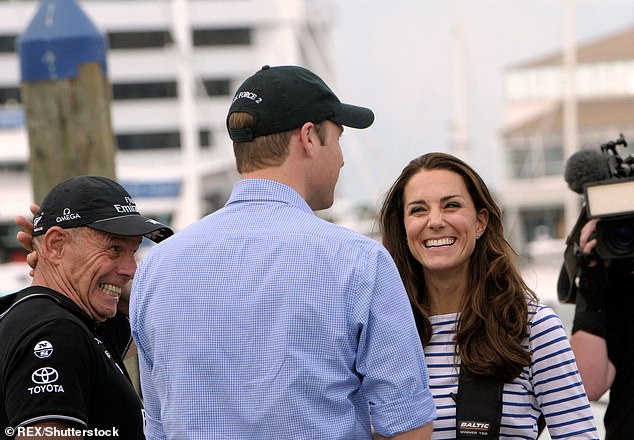 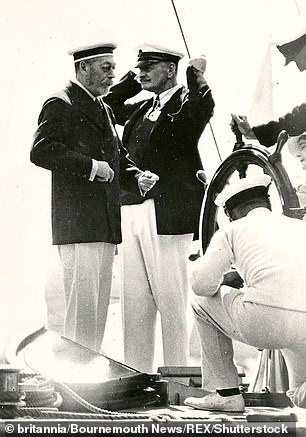 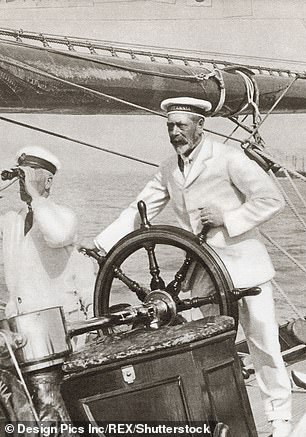 The winning cup was first presented by King George V (pictured left and right) at Cowes’s Royal Yacht Sqcuadron in 1920.

A spokesman for the Cup, said: ‘The Duke and Duchess are strong advocates for sport, and have undertaken work both in the UK and overseas to highlight the positive impact that sport can have on the individual and within local communities.

‘The Duchess in particular champions how the benefits of sport, nature and the outdoors can impact childhood development, and lead to improved physical and mental wellbeing for all.’

Kate will support four of her patronages: Action on Addiction, Place2Be, the Anna Freud National Centre for Children and Families, and The Royal Foundation in connection with her work on early years.

The couple hope The King’s Cup will become an annual event.