A paedophile couple jailed for 26 years plotted to make their friend’s five-year-old son their next victim after molesting five young girls in a bid to spice up their sex life.

Keeli Burlingham, 33, and Peter Taylor, also 33, would sexually assault youngsters and send pictures and videos of the abuse to each other over WhatsApp.

The pair, of Dukinfield, Greater Manchester, began their sick campaign of abuse after he asked her to dress as a schoolgirl as part of a sexual role play.

On one occasion cafe worker Burlingham took pictures of herself molesting a young girl ans sent them to her auto electrician boyfriend while he was on a USA road trip to celebrate his birthday.

Another saw Taylor taking pictures of an 11-year-old girl getting undressed in a swimming pool changing room and touching her over her bikini bottoms.

The couple, who blamed being in a ‘low ebb’ after their marriages broke down’, also planned to have sex with a five-year-old they knew.

Keeli Burlingham, 33, and Peter Taylor, also 33, (pictured together) would sexually assault youngsters and send pictures and videos of the abuse to each other over WhatsApp 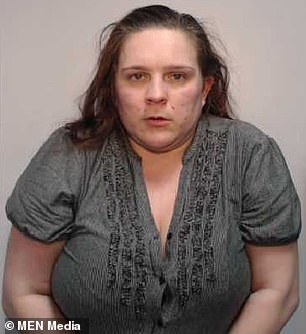 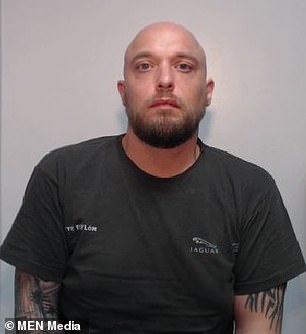 The pair (mugshots pictured), of Dukinfield, Greater Manchester, began their sick campaign of abuse after he asked her to dress as a schoolgirl as part of a sexual role play

They were arrested after downloading 5,035 lurid pictures of youngsters off the internet including 1044 in the most serious category A images.

Burlingham was also convicted of assault and distributing indecent photographs.

Taylor was handed 15 years in prison, while Burlingham was ordered to serve 11.

Both were ordered to sign the Sex Offender Register and be subject to a Sexual Harm Prevention Order for life.

Prosecutors said Taylor, who worked for a car dealership in Merseyside, was the ‘prime mover’ – manipulating Burlingham into carrying out the vile acts.

At Minshull Street Crown Court in Manchester, the five year old boy’s mother condemned Burlingham as she and Taylor were convicted of a string of sex offences.

‘I felt she was my friend and yet she has committed the ultimate betrayal, I found it hard to understand that she could do something like that.

‘I see her as two people – the previous friend and a monster. I struggle to trust anyone now. 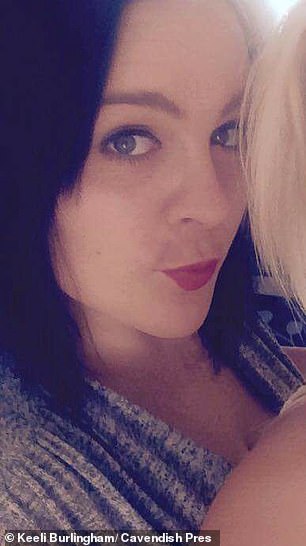 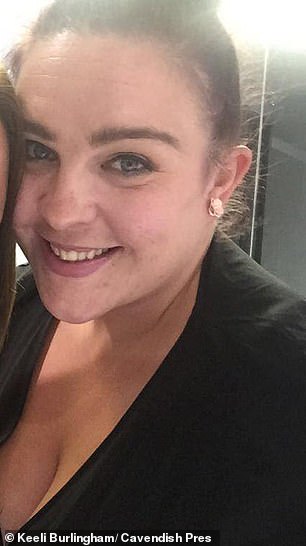 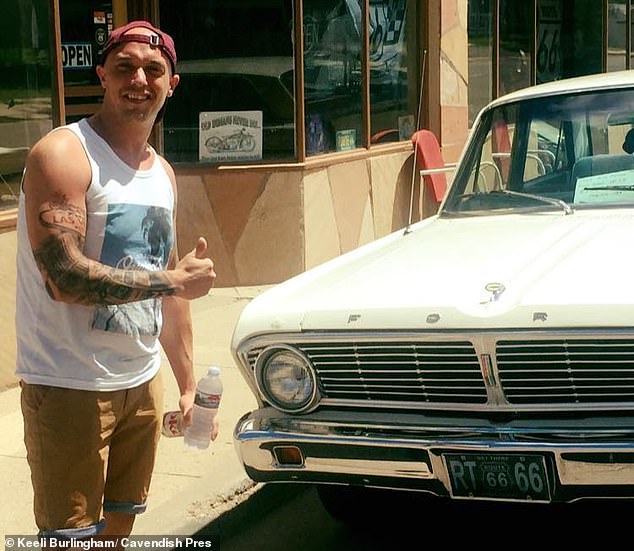 Taylor is pictured on his birthday road trip in the USA

‘To me both of them have hurt me too much but it was the betrayal from Keeli that hurts the most.

‘I didn’t understand what hatred was before this but I understand now. I have never been so angry in my life I don’t think I can get over this or let this lie.

‘The only solace I have is that they are in prison and my child and other children are now safe.’

The court heard the pair met on a dating website in 2016 after both breaking up with their respective spouses.

Prosecutor Michael Scholes said: ‘Throughout their relationship they downloaded indecent images of children for their personal sexual gratification. 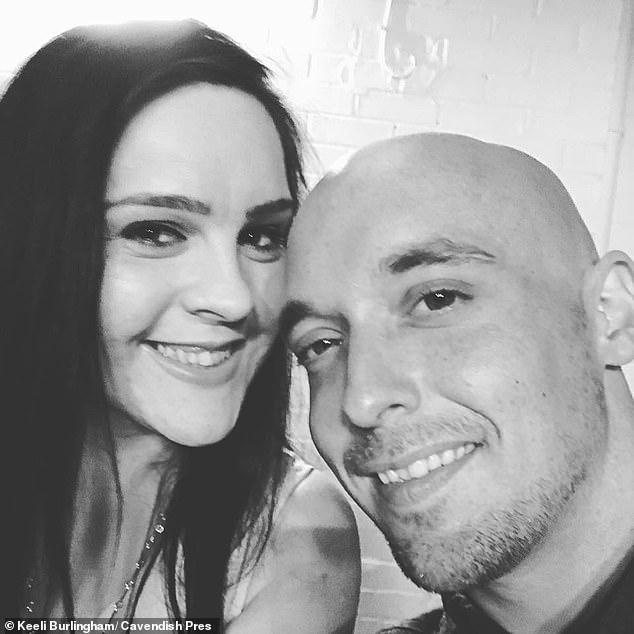 They (pictured together) were arrested after downloading 5,035 lurid pictures of youngsters off the internet including 1044 in the most serious category A images

‘Taylor is a man who obtains sexual gratification from downloading such images it is obvious he was the prime mover although it is clear from the chat logs we all had the dubious pleasure of having to consider that Keeli Burlingham obtained sexual stimulation from viewing those too.’

He said Burlingham and Taylor were babysitting a three-year-old girl when she began molesting her at his behest and used a mobile phone to film the assaults.

A second girl aged 11 known to the pair was targeted after Taylor became ‘obsessed’ with her.

The prosecutor said: ‘The chat logs make it clear that Taylor became sexually obsessed with the girl and the logs demonstrate he manipulated Keeli to assist in his desire to obtain images of her without her knowledge using a camera or photographic device.

‘Chat logs disclosed that on at least one occasion images including still and moving images were obtained of the child.

‘As the police were to discover many months after the event Taylor boasted of having sexually assaulted the girl without her knowledge – an assault which occurred while he touched her over her bikini bottoms when she was at a swimming pool. 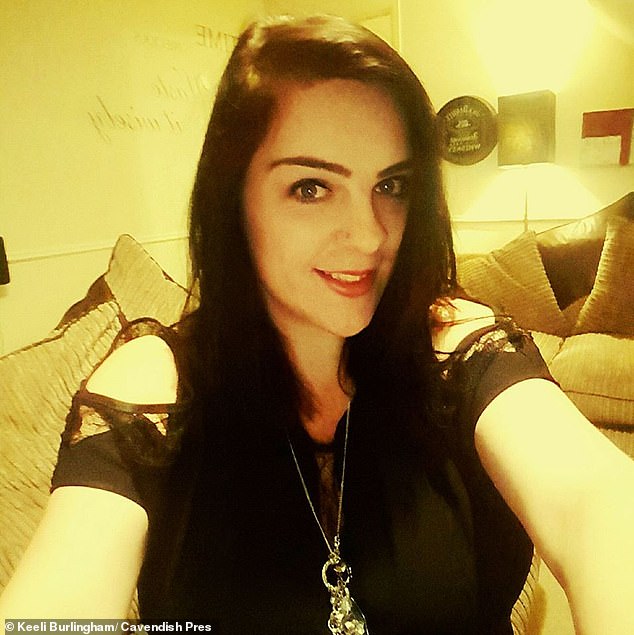 Burlingham was also convicted of assault and distributing indecent photographs

‘The chat logs demonstrated an obsession and desire for Taylor to sexually abuse the child and have intercourse with her.

‘In fact the defendants planned for that event and there was messaging of a similar nature discussing sexual activity with other friends of the girl.

‘This related to a sleepover, a sinister aspect is these messages included references to giving children sleeping tablets – it referred to children plural.’

‘On one occasions Taylor was on a ‘road trip’ in August 2017 to celebrate his birthday in the USA.

‘Whilst he was in the US Keeli was staying with a friend over a period of several days.

‘But whilst he was in the US it was clear from the chat logs that he pestered and manipulated Burlingham to obtain indecent images of the friend’s daughter.

‘Keeli Burlingham was taking care of the girl whilst her mother was at work. She sexually assaulted her and took a number of images of the assault.

‘It is clear Taylor was seeking to manipulate Keeli Burlingham to do his bidding the assault was encouraged by him in his messages sent from the US.

‘The images of the assault were sent immediately to Taylor in the US by Burlingham.’ 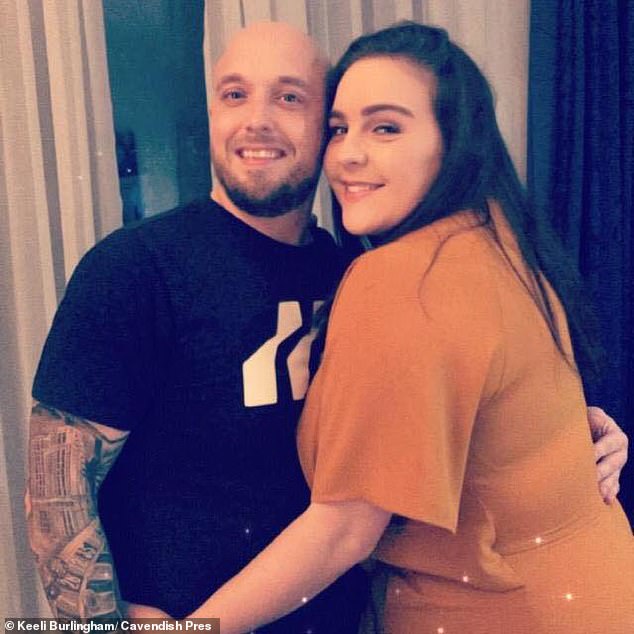 ‘They also planned to obtain access to a boy for the purposes of engaging in sexual activity with him. Fortunately, the sexual ambitions never went beyond the planning stage.’

Taylor was arrested in April 2019 and admitted downloading indecent images.

He claimed he was seeking help and he had ‘seen the error of his ways’ although prosecutors said he was ‘deceiving police in relation to the true picture’ in the hope further investigation would not be pursued.

In mitigation Taylor’s lawyer Howard Bernstein said: ‘He hadn’t accessed images of children before the relationship commenced – this is something that developed and eventually he says the interest in children and role play followed.

‘He accepts that very base and unsatisfactory sexual practices took place that then channelled themselves into obtaining sexual images of children and having sexual interest in children.

‘He accepts Keeli Burlingham was vulnerable due to a failed relationship but he also found himself in a low position following the break down of an eight year marriage and he was at a very low ebb.

‘The two of them were in a similar position of having had low self esteem, of having had relationship break downs that they found themselves in.

‘While it is accepted that he is the prime mover there were issues that suggest perhaps he isn’t somebody who has deliberately targeted somebody to manipulate them at the outset.’

‘If she had not met Mr Taylor this young woman wouldn’t have come to the attention of the courts.

‘She realises she played her part and doesn’t seek to pass all the blame onto Mr Taylor but there is a degree of vulnerability about her. There was a certain degree of persistence on the part of Mr Taylor.

‘She’s somebody who is desperate to please having had only three serious relationships in her adult life.

‘Her sexual preferences were entirely normal and initially when matters first commenced Mr Taylor was very keen on sexual role play and wanted her to assume the identity of a school age girl. This developed into the offences she has pleaded guilty to.

‘Prior to meeting this defendant she had never harboured any sexual fantasy about children.

‘She has developed an emotionally dependent position with Taylor maybe linked to the break down of her marriage.

‘She was vulnerable to emotional pressure placed on her and playing on her desire to please.

‘She has demonstrated remorse, victim awareness and victim empathy and she describes her actions as despicable.

‘She was engaged in a toxic relationship with a partner was manipulative and frequently spoke to her in an unpleasant manner. He wanted her to do his bidding.’

Sentencing Judge Mark Savill said: ‘You Burlingham were living an entirely unremarkable existence with a failed marriage and suffering from a degree of depression and low self esteem.

Taylor you appeared to be a respectable member of the community. However you were concealing a dark secret – a revolting sexual attraction to young children of both sexes that was lying dormant prior to you meeting Burlingham.

‘As your relationship progressed role play began as Taylor requested Burlingham fulfil the role of a schoolgirl.

‘I have no doubt that that served to heighten both your sexual enjoyment. What two individuals get up to in the privacy of their own homes isn’t usually a matter for these courts but these matters spiralled out of control and you both embarked on far more serious, sinister criminal behaviour.

‘The evidence I heard was base and vile and I recall the upset and concern shown by the jury during the trial.

‘You Taylor encouraged these acts you were manipulative of Burlingham, you Burlingham while pathetically keen to attain his affections nevertheless went along willingly and enthusiastically not only to satisfy him but also yourself.

‘The actions of both of you were outrageous and abhorrent and involved the most precious members of our society – its children.

‘While most of the children are never likely to appreciate what was done to them I have in mind their parents who will have to deal with and suppress these events throughout their life.’