The DUP refused to vote on the Finance Bill as a warning over May’s plans for the Irish backstop. Leader Arlene Foster (pictured) also voiced frustration that her party had not been allowed to see a draft of the Brexit deal before it was debated by Cabinet

The Democratic Unionist Party made its unhappiness with the Prime Minister’s Brexit deal clear last night by abstaining from crunch votes on the Budget.

It refused to vote on the Finance Bill as a warning to Theresa May over her plans for the Irish backstop.

The move put the Government on notice that the DUP is edging closer to ripping up the ‘confidence and supply’ agreement that allows the Conservatives to govern.

The party’s ten MPs prop up Mrs May’s minority administration through a formal deal that obliges them to vote for the Budget, the Queen’s Speech and Brexit legislation.

But amid increasing rancour after Downing Street unveiled the withdrawal agreement setting out the terms of Britain leaving the EU, co-operation between the parties has come under threat.

The DUP has said there is ‘serious trouble’ with the deal, which risks leaving Northern Ireland on a different regulatory footing to the rest of the UK – one of party leader Arlene Foster’s ‘blood red lines’.

A source told the BBC: ‘Tory MPs need to realise that their jobs, their majorities, their careers depend on a good working relationship with the DUP and May doesn’t appear to be listening.’ 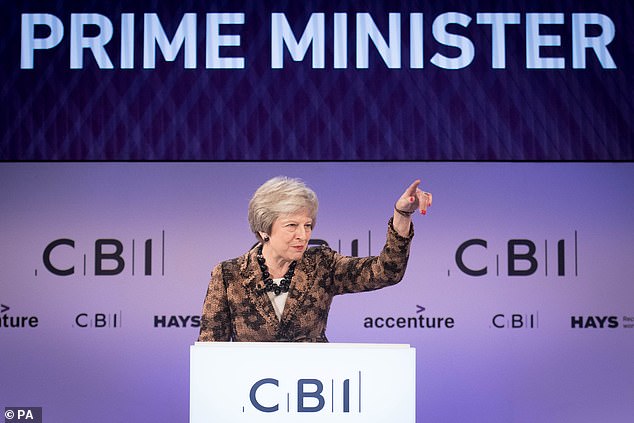 In an address at the Conference of British Industry’s annual conference yesterday, Mrs May reminded her critics that people’s jobs were on the line if there is no Brexit deal

While the Government won the votes on the Finance Bill, the DUP’s failure to support it in the first two votes were a blow to Mrs May’s authority.

The DUP is pessimistic that she will amend the Brexit deal in any significant way and sees it as driving a regulatory wedge between Northern Ireland and Great Britain.

Mrs Foster voiced her frustration last week that her party had not been allowed to see the draft of the deal before it was debated by Cabinet.

In a string of other developments yesterday:

Downing Street said yesterday the Prime Minister was, for example, looking to improve the provisions for security co-operation.

In an address at the CBI’s annual conference yesterday, Mrs May reminded her critics that people’s jobs were on the line if there is no Brexit deal.

She said: ‘We are not talking about political theory, but the reality of people’s lives and livelihoods. Jobs depend on us getting this right.

‘What we have agreed unashamedly puts our future economic success, and the livelihoods of working families up and down this country, first.’