University Challenge viewers saw the funny side as the first of the Christmas specials ended in a thrashing for alumni of Durham University.

Former Durham students took on contestants who had once studied at Keble College, Oxford, in the festive edition of the BBC Two show, with comedian Katy Brand and musician Rod Clements among the guests.

The Keble team, including Brand and former child prodigy Anne-Marie Imafidon, ran away with the competition from the start.

The former Oxford students, who also had writer Frank Cottrell-Boyce and Paul Johnson, director of the Institute for Fiscal Studies, on their team, racked up 220 points to Durham’s 35.

Many fans took to Twitter to comment on Durham’s poor performance, with some joking that the team’s buzzers must have been broken.

‘Are Durham awake??’ asked one person.

‘Are Durham’s buzzers working?’ said another.

One person quipped: ‘No wonder the pink panther left Durham.’ 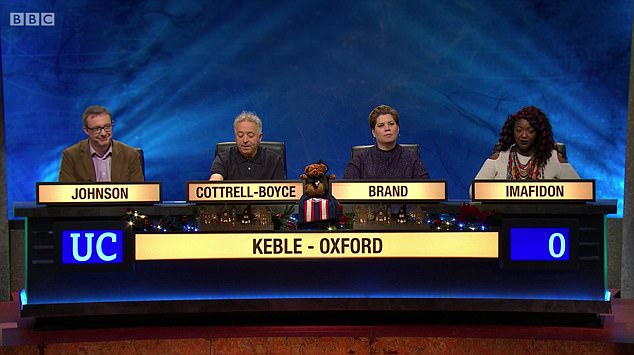 ‘Ashamed to be associated with Durham right now,’ confessed another.

Fans were particularly impressed with screenwriter and novelist Cottrell-Boyce.

‘This Cottrell-Boyce man knows everything in the world,’ said one, while another called him ‘unstoppable’.

Each team will compete in one of seven first-round matches, after which the four teams with the highest winning scores will face each other in two semi-finals. The winners of each of those ties will then face off for the title of series champions. 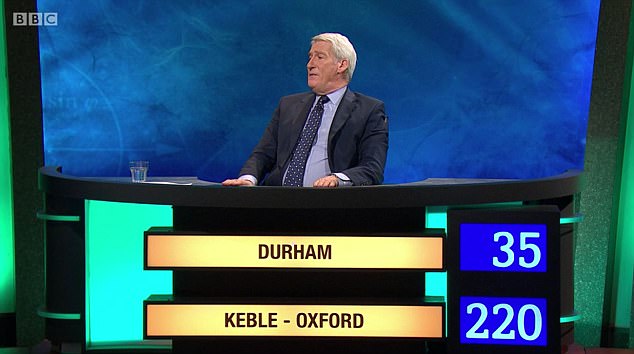 The Keble College alumni were the runaway winners of the contest, hosted by Jeremy Paxman (pictured), racking up 220 points to Durham’s 35