Dustin John Higgs, 48, is due to be executed by lethal injection on Friday

The federal execution of convicted murderer Dustin Higgs is underway, marking the final death sentence to be carried out by the Department of Justice under President Donald Trump.

Witnesses at the federal penitentiary at Terre Haute, Indiana were transported to the area where executions take place shortly before midnight on Friday.

Higgs conspired with another man to kidnap and murder three young women in Washington DC in one night in January 1996.

His lawyers have argued it is ‘arbitrary and inequitable’ to execute Higgs while Willis Haynes, the man who pulled the trigger in the murders, was spared a death sentence.

Higgs, 48, had been due to receive a lethal injection of pentobarbital at 6pm on Friday, but last-minute legal challenges delayed the execution by several hours.

It marked the third federal execution at Terre Haute in four days, and the 13th during Trump’s term, making him the most prolific president in carrying out death sentences since Grover Cleveland in the 1800s. 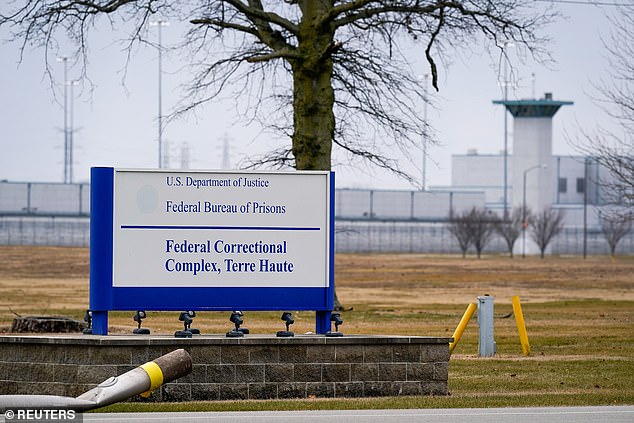 The United States Penitentiary at the Federal Correctional Complex in Terre Haute, Indiana is seen on Friday

Trump resumed federal executions in July after a 17-year hiatus, although they had still been carried out at the state level.

President-elect Joe Biden is an opponent of the death penalty and is expected to suspend federal executions when he takes office next week.

The federal judge who presided over Higgs’ trial two decades ago says he ‘merits little compassion.’

‘He received a fair trial and was convicted and sentenced to death by a unanimous jury for a despicable crime,’ U.S. District Judge Peter Messitte wrote in a December 29 ruling.

Defense attorneys won temporary stays of execution this week for Higgs and another inmate, Corey Johnson, after arguing that their recent COVID-19 infections put them at greater risk of unnecessary suffering during the lethal injections.

But higher courts overruled those decisions, allowing the executions to go forward, and Johnson was executed Thursday night. 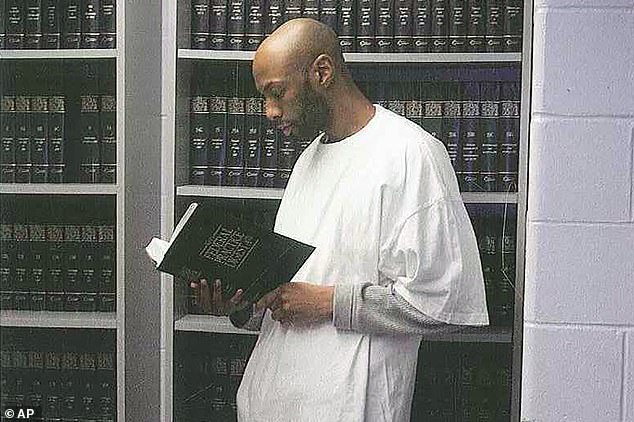 Higgs is seen in 2015 at the Federal Prison in Terre Haute, Indiana. Higgs is the last federal inmate facing execution before President Donald Trump leaves office 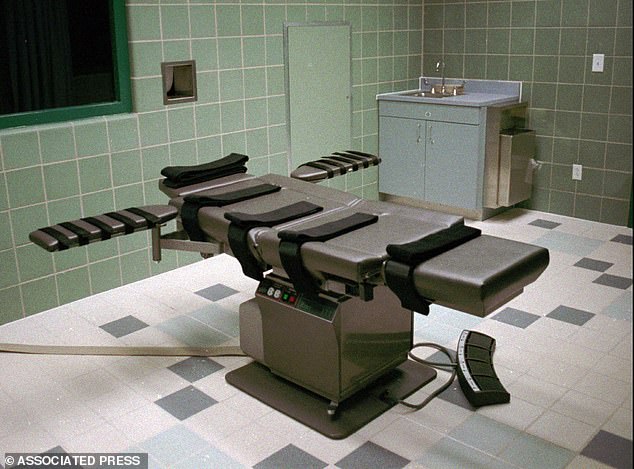 A file photo shows the interior of the execution chamber in the U.S. Penitentiary in Terre Haute. Higgs will be strapped to the gurney and injected with pentobarbital, a powerful barbiturate

Shawn Nolan, one of Higgs’ attorneys, sees a clear political agenda in the unprecedented string of federal executions at the end of Trump’s presidency, with Higgs heading to the death chamber just five days before Biden’s inauguration.

‘In the midst of the pandemic and everything that´s going on right now in the country, it seems just insane to move forward with these executions,’ Nolan said recently. ‘And particularly for Dustin, who didn’t shoot anybody. He didn’t kill anybody.’

Higgs’ Dec. 19 petition for clemency says he has been a model prisoner and dedicated father to a son born shortly after his arrest. Higgs had a traumatic childhood and lost his mother to cancer when he was 10, the petition says.

‘Mr. Higgs’ difficult upbringing was not meaningfully presented to the jury at trial,’ his attorneys wrote.

His death sentence was the first imposed in the modern era of the federal system in Maryland, which abolished the death penalty in 2013.

Higgs’ shocking crimes: Conspired to kidnap and kill three women after an argument during a triple-date

In October 2000, a federal jury in Maryland convicted Higgs of first-degree murder and kidnapping in the killings of Tamika Black, 19; Mishann Chinn. 23; and Tanji Jackson, 21.

Higgs was 23 on the evening of January 26, 1996, when he, Willis Haynes and a third man, Victor Gloria, picked up the three women in Washington, DC, and drove them to Higgs’ apartment in Laurel, Maryland, to drink alcohol and listen to music.

The men smoked pot late into the night, and before dawn the next morning an argument between Higgs and Tanji prompted her to grab a knife in the kitchen before Haynes persuaded her to drop it.

‘I am going to get you all f***ed up or robbed!’ Tanji shouted, according to Gloria’s testimony. In response, Higgs remarked to the other men that Tamika ‘do know a lot of n*****s.’

As Tamika left the apartment with the other women, she appeared to write down the license plate number of Higgs’ van, angering him. The three men chased after the women in Higgs’ van, a blue Mazda MPV. Haynes persuaded them to get into the vehicle.

Instead of taking them home, Higgs drove them to a secluded spot in the Patuxent National Wildlife Refuge, federal land in Laurel. 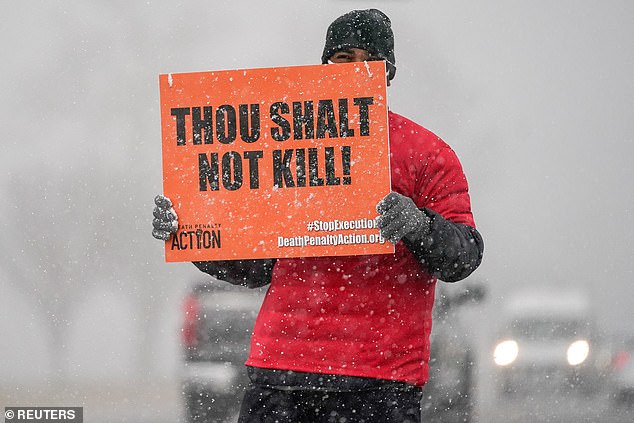 An activist in opposition to the death penalty protests during a snowstorm outside of the United States Penitentiary in Terre Haute, Indiana on Thursday

‘Aware at that point that something was amiss, one of the women asked if they were going to have to `walk from here´ and Higgs responded ‘something like that,” said an appeals court ruling upholding Higgs’ death sentence.

Higgs handed his pistol to Haynes, who shot all three women outside the van before the men left, Gloria testified.

‘Gloria turned to ask Higgs what he was doing, but saw Higgs holding the steering wheel and watching the shootings from the rearview mirror,’ said the 2013 ruling by a three-judge panel of the 4th U.S. Circuit Court of Appeals.

Investigators found Jackson’s day planner at the scene of the killings. It contained Higgs’ nickname, ‘Bones,’ his telephone number, his address number and the tag number for his van.

The jurors who convicted Haynes failed to reach a unanimous verdict on whether to impose a death sentence. A different jury convicted Higgs and returned a death sentence after a separate trial. Gloria pleaded guilty to being an accessory after the fact to the murders and was sentenced to seven years in prison.

Higgs has argued that his death sentence must be thrown out because jurors failed to consider it as a ‘mitigating factor’ that Haynes was convicted of identical charges but sentenced to life in prison.

The appeals court concluded that rational jurors could find that Higgs had the dominant role in the murders even though Haynes indisputably was the triggerman.

In their clemency petition, Higgs´ lawyers said Gloria received a ‘substantial deal’ in exchange for his cooperation

‘Moreover,’ they wrote, ‘significant questions remain as to whether Mr. Gloria received the additional undisclosed benefit of having an unrelated state murder investigation against him dropped at the urging of federal officers to protect his credibility as the star witness. A federal death verdict should not rest on such a flimsy basis.’

Mishann worked with the children’s choir at a church, Tanji worked in the office at a high school and Tamika was a teacher’s aide at National Presbyterian School in Washington, according to the Washington Post.

On the day in 2001 when the judge formally sentenced Higgs to death, Tamika’s mother, Joyce Gaston, said it brought her little solace, the Post reported.

‘It’s not going to ever be right in my mind,’ Gaston said, ‘That was my daughter. I don’t know how I’m going to deal with it.’