A Dutch church has provided a round the clock service for asylum seekers as authorities are unable to enter during prayers.

The Tamrazyan family from Armenia have been provided with over 700 hours of sanctuary by the Bethel Church in the Hague since October 26.

Husband Sasun and wife Anousche and their children, Hayarpi, Warduhi, and Seyran fled the former Soviet republic nine years ago, according to Eternity News. 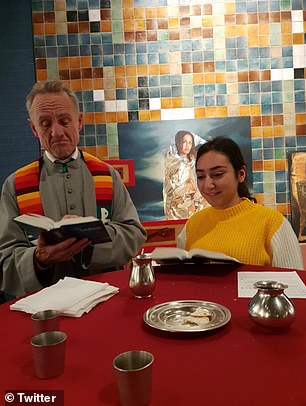 In this picture uploaded to Twitter by Hayarpi, 21, (right) she stands alongside one of the pastors at a communion service

The asylum seekers had been living in special accommodation before a Dutch court ordered their deportation in September.

They reached out to local congregations to help them and fled to the Bethel Church, saying they felt vulnerable to deportation at their asylum centre.

Hayarpi Tamrazyan, 21, has been active on social media in rallying support for her family and has uploaded many pictures with the congregation, including local councillors.

In one of her tweets last month she said: ‘I can not and do not want #kinderpardon between my study and my family.’

This refers to the potential ‘kinder pardon’ she could have applied for as a young person studying in the country, but she refused to be separated from her family. 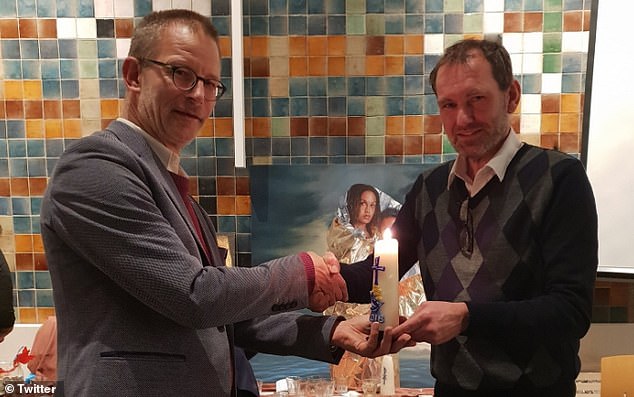 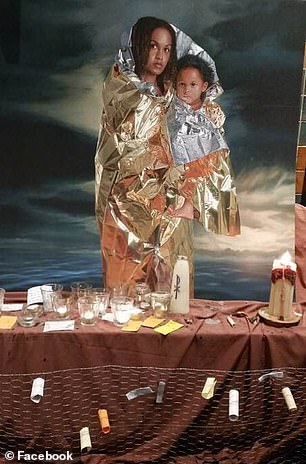 Pastors from around the Netherlands are giving sermons at the church and passing a relay candle onto each other so that the service continues.

Joost Schelling, a pastor who has been helping at the church, wrote on Facebook: ‘I think it is good that the churches make a statement in their own way for a fairer and also faster asylum procedure.’

On Saturday Theo Hettema, who is the chairman of the Protestant Ministers’ Council according to Euro News, appealed to all ‘night owls’ to join in the service as it begins its fifth week: ‘I hope that you will be able to help us, the family and the children who are in the Netherlands who should fall under the kinderpardon.’

Armenia is locked in conflict with Azerbaijan over their border and skirmishes are common; a violation of a 1994 ceasefire agreement.

Although, the British Foreign Office advises against travel into this border region the rest of the country is thought to be relatively safe for tourists.