Duterte accused of attempted rape after he describes ‘touching’ maid

Philippine President Rodrigo Duterte has sparked outrage after describing how he ‘touched’ his maid while she was asleep when he was a teenager.

Women’s rights groups have denounced the 73-year-old leader’s ‘repulsive’ comments and accused him of attempted rape and encouraging sexual abuse.

Duterte frequently sparks uproar with his comments on women, including rape jokes and boasting about adultery.

In his latest remarks, Duterte recounted a confession he had with a priest in high school, detailing how he had entered the room of his maid while she was sleeping.

‘I lifted the blanket… I tried to touch what was inside the panty,’ Duterte said in a speech late Saturday.

‘I was touching. She woke up. So I left the room.’

Duterte recounted telling the priest that he had then returned to the maid’s room and again tried to molest her.

Women’s rights political party Gabriela denounced Duterte’s ‘repulsive’ comments and called for him to resign, saying he had confessed to attempted rape.

‘Rape does not happen only through penile insertion. If it is a finger or an object it is considered rape,’ said Joms Salvador, secretary general of Gabriela.

Responding to the criticism, Duterte’s spokesman said Sunday that the president had ‘made up’ and ‘added and spliced’ the story.

‘He has made up a laughable anecdote to dramatise the fact of sexual abuse that was inflicted on him and his fellow students when they were in high school,’ said Salvador Panelo. 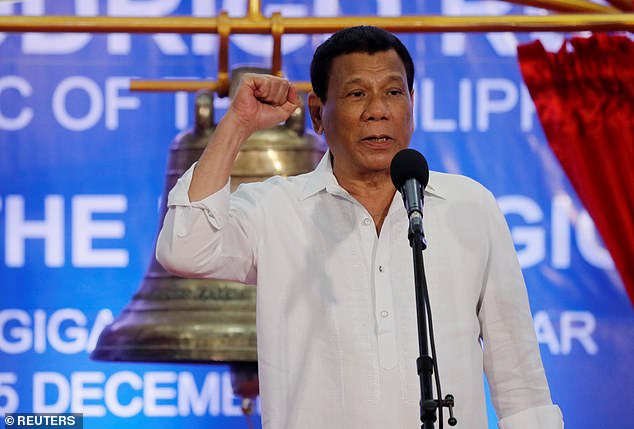 Duterte made the remarks as he blasted the Catholic Church over allegations of sexually abusing children.

The president, who brands the church the ‘most hypocritical institution’ in the mainly Catholic nation, said Saturday that he and his classmates at school were molested during confession.

It was his latest tirade against bishops and priests who have been critical of his drug war which has left more than 5,000 people dead, according to official figures.

Duterte and his aides often dismiss his controversial statements about women as a ‘joke’ or insist they are taken out of context.

Duterte provoked fury in 2016 when during an election campaign speech he said he had wanted to rape a ‘beautiful’ Australian missionary who had been murdered in a Philippine prison riot.

More than a million Filipinos work abroad as domestic workers, according to the labour ministry.

‘Flaunting abusive practices encourages the rape culture and in this case, sexual abuse of domestic workers,’ said Jean Enriquez, executive director of the Coalition Against Trafficking in Women-Asia Pacific.