Duterte sparks outrage in the Philippines with latest rape remarks

Philippines President Rodrigo Duterte said his hometown has a high number of sexual assaults because there’s ‘many beautiful women, so many rape cases’.

There have been calls for the 73-year-old leader to issue a public apology over the comments, which referred to Davao City.

But officials from the leader’s Malacañang Palace shrugged the remarks off as a ‘joke’.

His comments, made in a speech in Mandaue City, have been translated as: ‘They said there are many rape cases in Davao. As long as there are many beautiful women, there will be more rape cases.’

Philippines President Rodrigo Duterte said his hometown has a high number of sexual assaults because there’s ‘many beautiful women, so many rape cases’

A lawmaker in the country, France Castro, has demanded an apology from Duterte.

‘We demand from Rodrigo Duterte immediate retraction of his latest [statement] and a public apology. We demand that his administration ensure immediate justice for rape victims not only in Davao but for the entire country,’ she said, according to Rappler.

‘There is rape because there is a rapist, not because of anything about the victim.’

Duterte made the comments in response to police statistics revealing his hometown to have the highest number of rape cases in the country in the second quarter of 2018.

He has sparked outrage with similar outbursts in the past and has angered many Filipinos for his allegedly misogynistic comments.

In 2017 he ‘joked’ that his soldiers could rape women and he would go to prison. 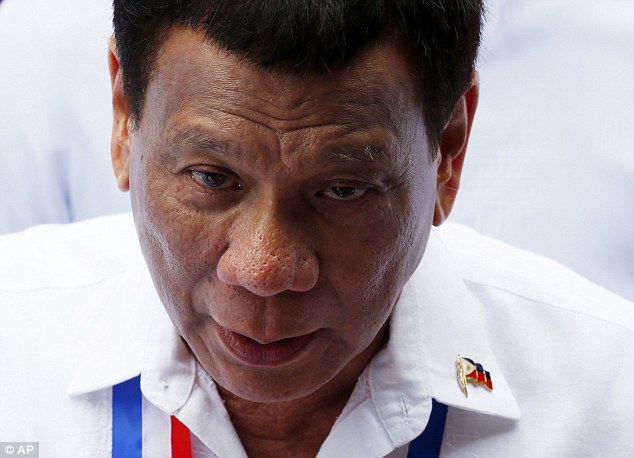 There have been calls for the 73-year-old leader to issue a public apology over the comments, which referred to Davao City

‘Just do your work. I will handle the rest. I will be imprisoned for you. If you rape three (women), I will say that I did it.’

In the 2016 presidential election campaign Duterte sparked controversy over comments made on the rape and killing of an Australian missionary during a prison riot in the southern city of Davao in 1989 while he was the mayor.

‘What occurred to me was they gang-raped her,’ he said then. ‘I was angry because she was raped. But she was so beautiful the mayor should have been first. What a waste.’

In February this year he told a local audience foreign women did not attract him because they have a ‘queer odour’ unlike Filipinas who were ‘fragrant’.

A day later while meeting a group of former communist rebels Duterte joked he would have specific orders for how the military would treat female guerrillas.

‘We won’t kill you. We will just shoot your vagina so that if there is no vagina, it would be useless,’ he said.