Dwayne ‘The Rock’ Johnson reacts to his balloon in Macy’s Thanksgiving Day Parade: ‘Never in my wildest dreams’

By Tracy Wright and Sam Joseph Semon For Dailymail.com

He’s one of the world’s highest paid actors.

But Dwayne ‘The Rock’ Johnson was overwhelmed with pride upon seeing his very own balloon in the annual Macy’s Thanksgiving Day Parade on Thursday morning.

The 48-year-old former wrestler admitted he’s done some ‘pretty cool’ things in his career, but never began to imagine seeing his likeness in the sky on one of the most popular television programs of the year.

Amazing: Dwayne ‘The Rock’ Johnson was overwhelmed with pride upon seeing his very own balloon in the annual Macy’s Thanksgiving Day Parade on Thursday morning

A massive balloon made its way through the streets of Manhattan featuring The Rock from his iconic 1996 photo which has made its round in memes and was also recreated in an SNL sketch.

‘Never in my wildest dreams,’ he wrote. I’ve been a lucky SOB to have done some pretty cool sh** in my career, but after seeing my @nbcyoungrock FANNY PACK FLOAT in the #MacysThanksgivingParade, this might take the cake.’

He reminisced on the past and described just a few of the hardships endured on the road to becoming a global superstar.

‘This time in my life may represent when I had just $7bucks in my fanny pack, but at least I had enough COOL to tuck my turtleneck in and wear fake silver jewelry because it was all I could afford,’ he wrote. 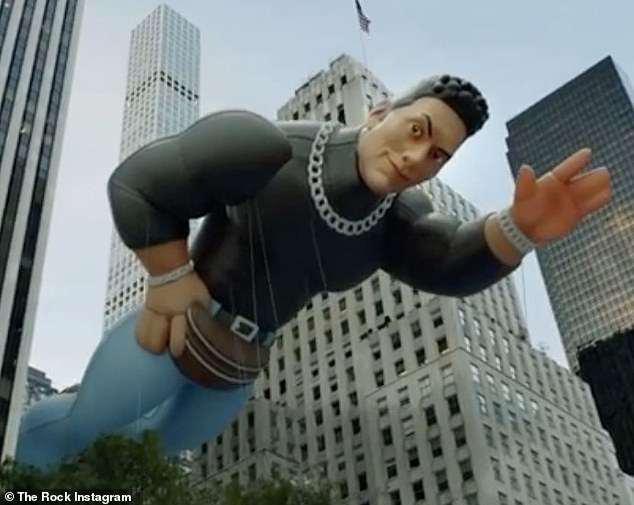 So cool: The 48-year-old former wrestler admitted he’s done some ‘pretty cool’ things in his career, but never began to imagine seeing his likeness in the sky on one of the most popular television programs of the year

A real blessing: His iconic 1996 photo has made its round in memes and was also recreated in an SNL sketch

‘And my massive plucked raised eyebrow is the stuff that dreams (and nightmares) are made of. Float on, kid.. you might just make it one day.’

Parade hosts Savannah Guthrie and Hoda Kotb reacted positively to the float, with the former remarking that, ‘I can’t wait to see what kind of trouble little D.J. got into.’

The upcoming show was first announced in January, with NBC giving a straight-to-series order to the project. 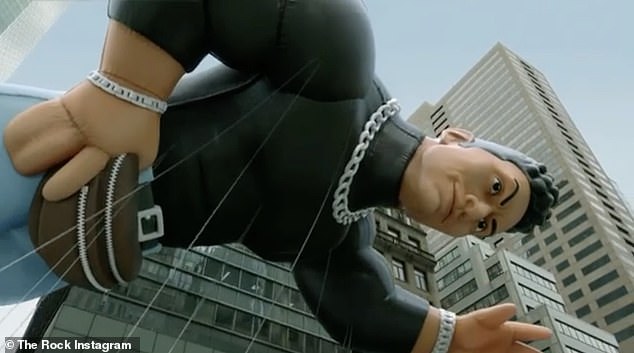 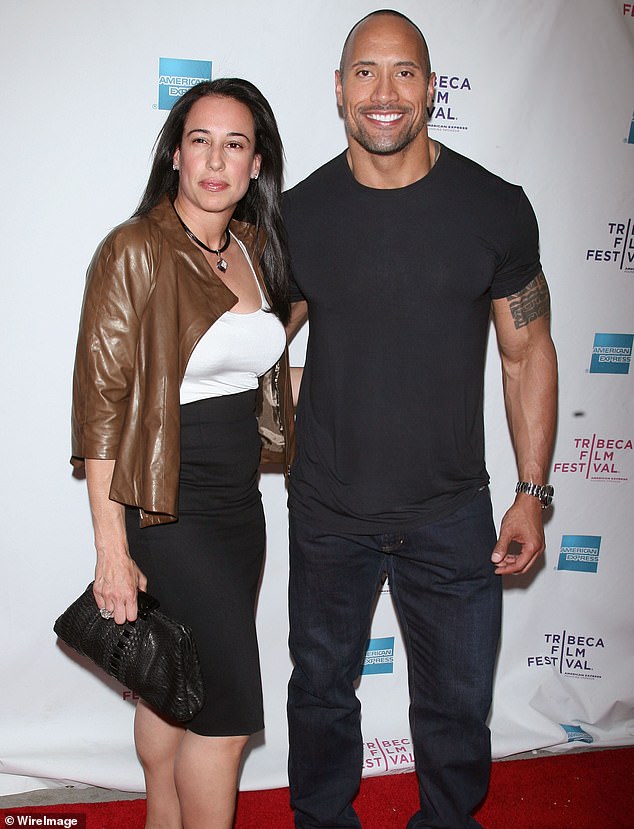 Teaming up: Johnson’s ex-wife and business partner Dany Garcia is set to produce the show; the two are seen in 2009

Alongside Johnson, the series will be helmed by Fresh Off the Boat creator Nahnatchka Khan, who also serves as an executive producer on the show, and includes producers Hiram Garcia and the Moana actor’s ex-wife and business partner Dany Garcia.

The story follows the boy who would eventually become The Rock at various points in his life and the lessons that he learns from his unconventional upbringing.

Starring in the series will be Adrian Groulx as the 10-year-old version of Johnson, Bradley Constant as the 15 years old iteration, and Marco Polo actor Uli Latukefu for the 18-to-20 year old version.

Production began in November, with principal photography occurring in Australia. 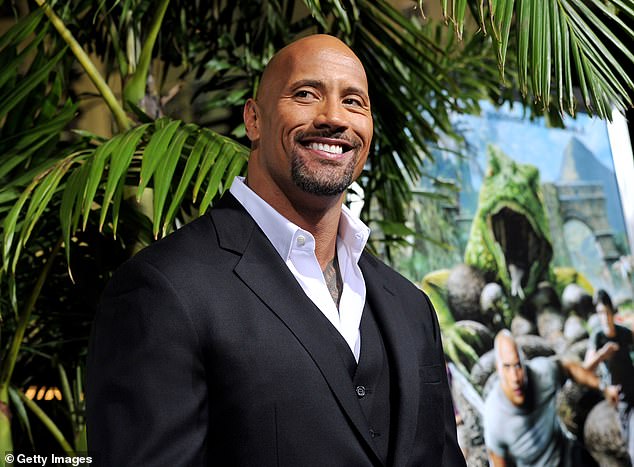 Boss: The Rock regularly tops Forbes’ highest paid actors lists after climbing his way through the ranks of wrestling to become a highly-coveted star 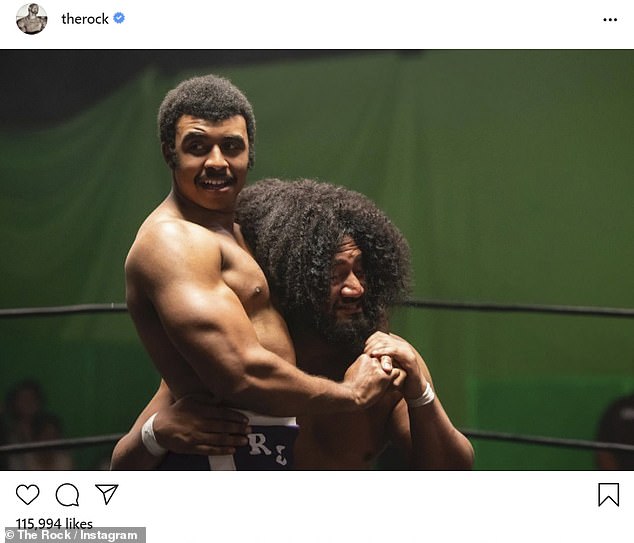 An inside look: The Fast and Furious actor shared an image of Joseph Lee Anderson playing his father on the upcoming series

To celebrate the start of filming, the Jumanji: Welcome to the Jungle actor shared a photo from the set of his show, depicting actor Joseph Lee Anderson portraying his father Rocky Johnson.

The wrestler wrote in the caption: ‘Wanted you guys to see this “first look” at my pops. No filters, no polish and nothing fancy. Just the Soulman doing what he did best!’

He added: ‘Can’t wait for you guys to watch our new show. I think you’re gonna like it.’ 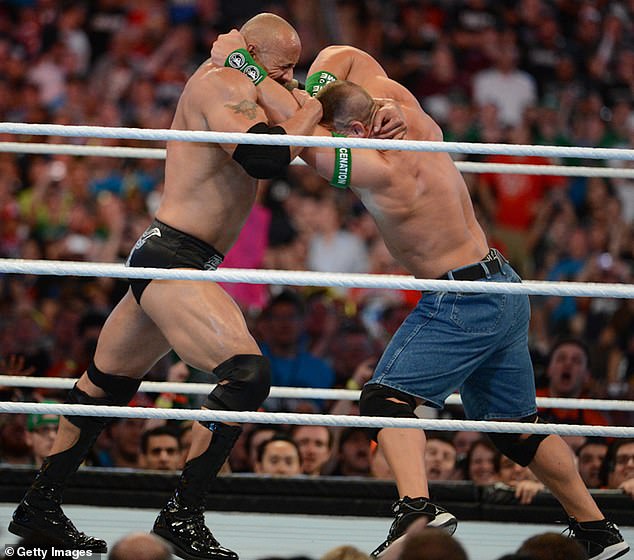 Pound for pound: The series will also depict the influence that other wrestlers had on Johnson’s life; he is seen competing against John Cena in 2012