Dying man, 23, with days to live is granted last wish to marry his high school sweetheart

After two heart transplants, terminally ill Javier Rodriguez had one last wish: to marry his high school sweetheart and the mother of their infant daughter, before entering a hospice for his final days.

‘I love you’, the 23-year-old Rodriguez whispered into his bride’s ear during a hastily put together ceremony that was packed with tearful family, friends and medical personnel at a hospital chapel in Chicago on Wednesday.

He was to be taken back to the newlyweds’ home the next day, which was Thanksgiving, with just days to live because of his terminally-ill condition, attributed to a birth defect.

Javier Rodriguez, 23, after having two heart transplants relating to a birth defect, was granted his dying wish, to marry his childhood sweetheart Crytstal Cuevas. Both are pictured in a post made on Facebook after the ceremony at a Chicago hospital 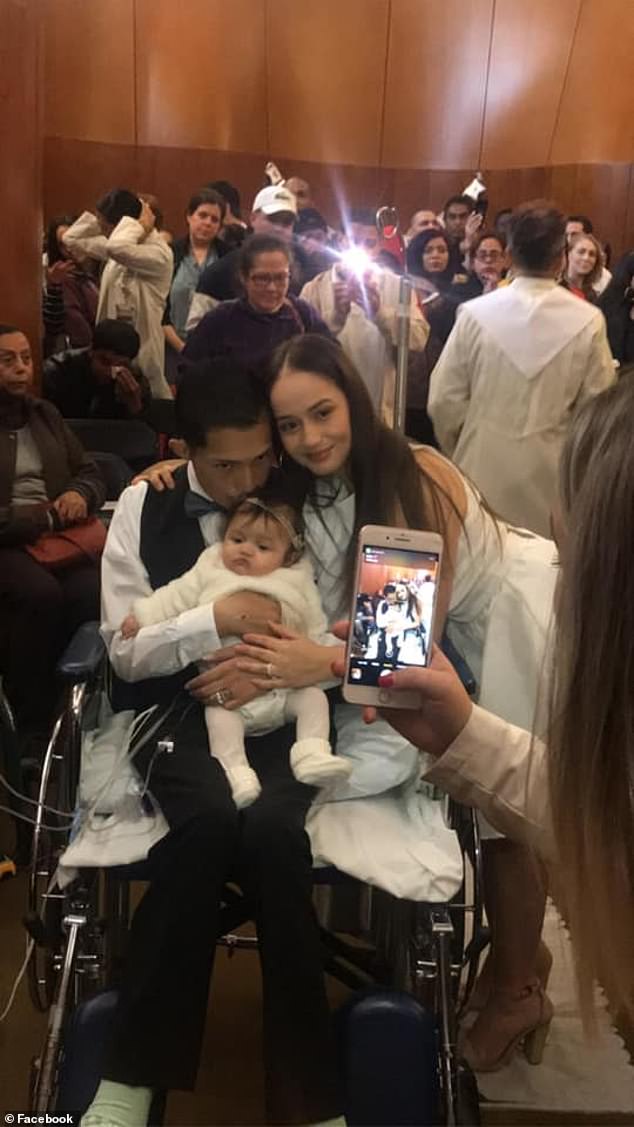 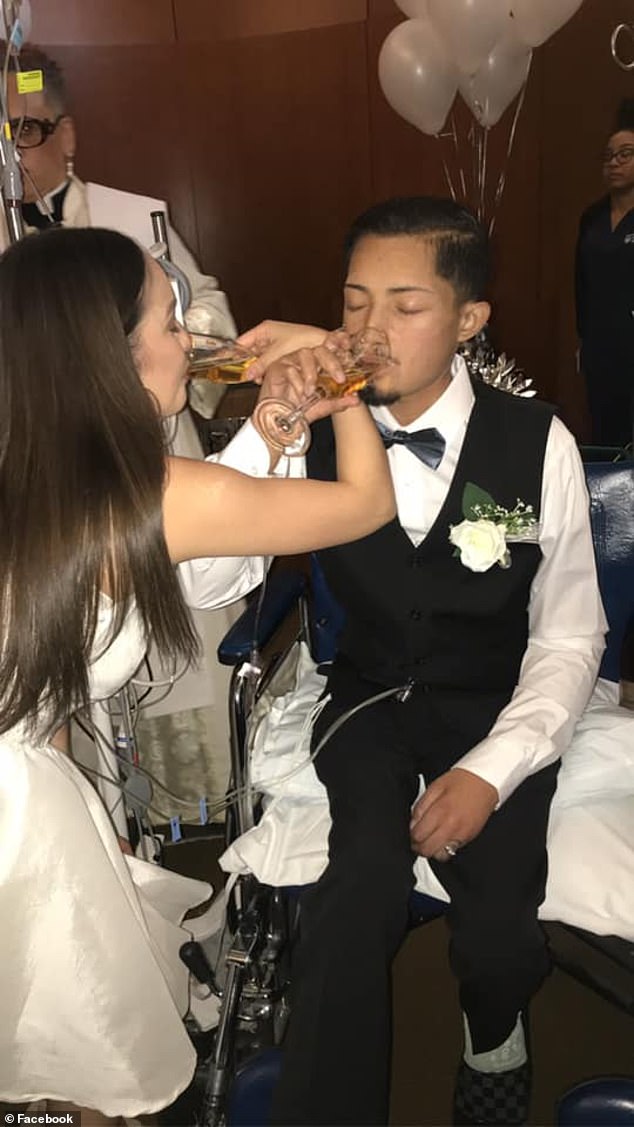 For Cuevas (left) it was the happiest day of her life marrying Rodriguez (right), although it would also be bittersweet for the new bride and soon-to-be widowed mom. The couple are pictured celebrating with a toast in a post made on Facebook

‘He’s at peace with that’ said his bride Crystal Cuevas, 23, reports the Chicago Sun-Times.

But she confessed the happiest day of her life was still bittersweet, especially as a soon-to-be widowed mom.

‘When I think of my daughter, that’s when it breaks me down’, the Sun-Times reports.

Rodriguez was diagnosed with familial dilated cardiomyopathy, a genetic condition that predisposes young people to heart failure, reports the Chicago Tribune. He had heart transplants at age 14 and 18.

The groom had actually been late to his own wedding, making Cuevas pace back and forth nervously while she waited before the ceremony, the Sun-Times reports. 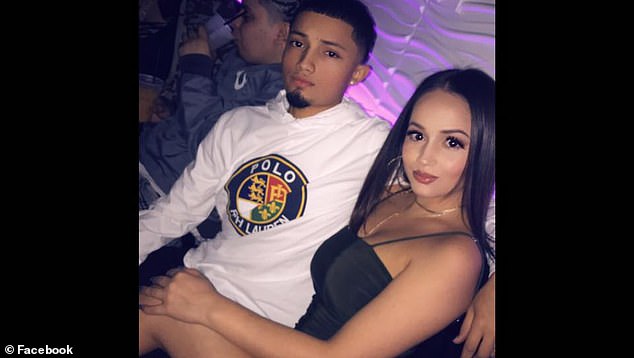 Cuevas (right) and Rodriguez (left) have been together since they were juniors in high school. They are pictured in a post made on Facebook 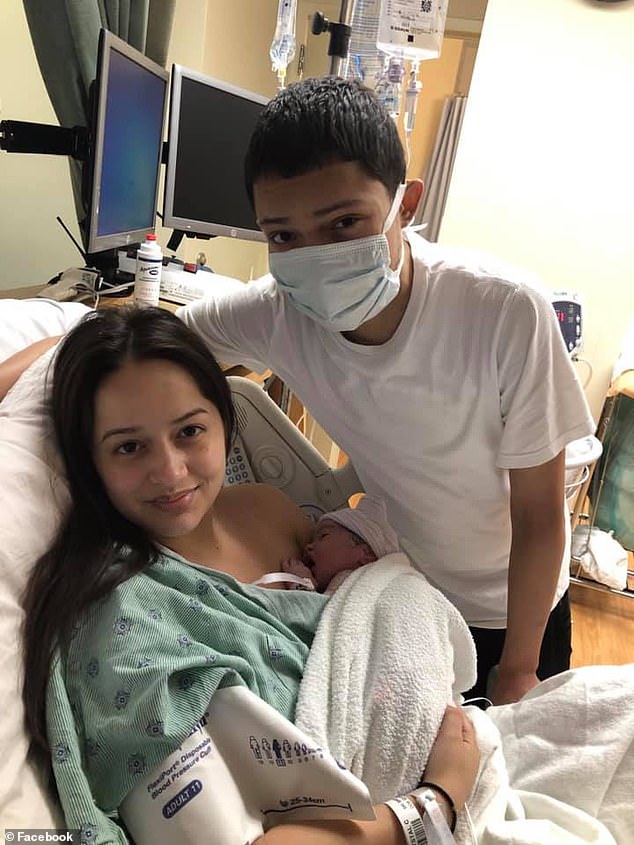 Rodriguez, after being so powerless over his diminishing health, had his say over how he wanted to get married.

He arrived in his wheelchair at the chapel at Chicago Medical Center dressed sharp in a crisp white shirt, bow tie, suit vest and dark slacks.

His goatee was neatly trimmed. His shortly cut hair parted to one side.

An intravenous drip trailed him as he rolled into the chapel seated in his wheelchair.

Cuevas, whom he’s been with since they were high school juniors and had rushed to prepare for the last-minute nuptials, had just tried her perfect-fitting white dress about an hour before the ceremony.

She put a hand over her mouth and cried after her long-time beau and soon-to-be husband expressed his love for her before the knot was tied.

‘Javi, I now pronounce the two of you husband and wife’, pastor Stephanie Welsh said. ‘You may kiss… your… bride!’

It was a kiss that lasted so long it prompted someone to suggest the couple ‘get a room’.

‘This is our room!’ Cuevas cried out.

It was the last visit for the couple to a hospital, at least together.

‘I just want my son to be happy’, the groom’s mom Ana Silva said. ‘He’s marrying the love of his life, and they have a beautiful baby girl’. 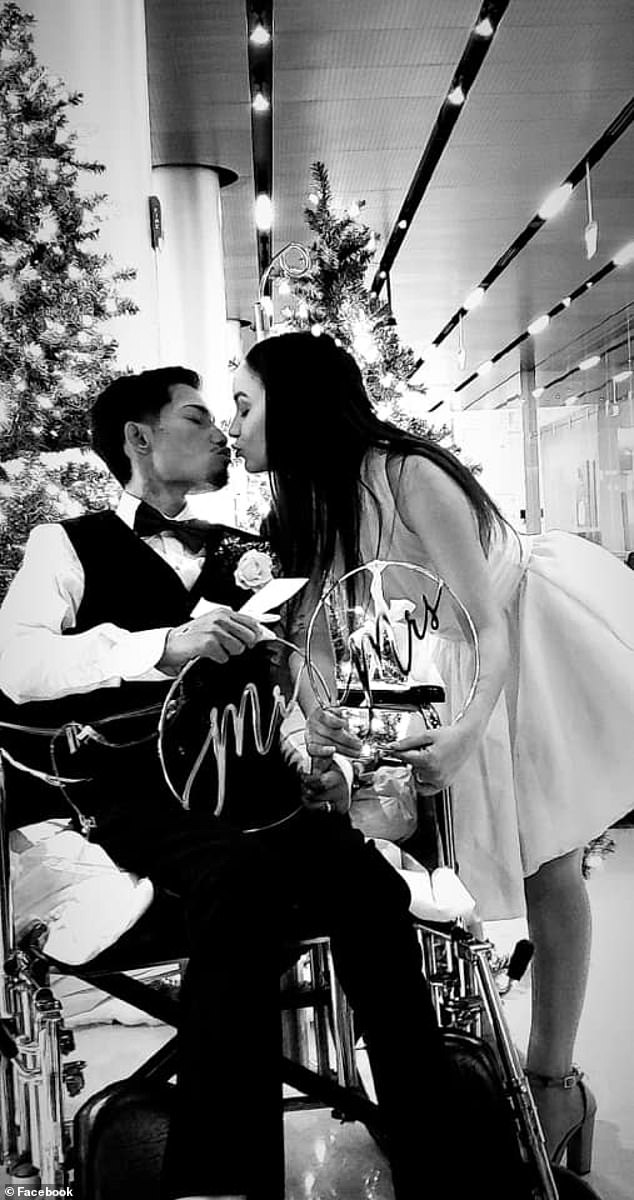 Javier Rodriguez and his new bride Crystal Cuevas (pictured) kissed so long in the hospital chapel that it prompted one person at their wedding to suggest ‘get a room!’ ‘This is our room’ the bride yelled back