Dying soldier, 78, battles to halt trial over allegations a man was ‘murdered’ by British troops in Ulster 46 years ago

By Ian Drury for the Daily Mail

A dying Army veteran facing trial over a fatal shooting in Northern Ireland 46 years ago has launched a legal battle against the Government to halt the controversial case.

Great-grandfather Dennis Hutchings, 78, is facing charges over the death of 27-year-old John-Pat Cunningham, who he suspected of being an IRA member, in June 1974.

Despite no fresh evidence, no witnesses and no new forensic leads, the retired soldier – cleared twice of the killing – has been accused of attempted murder.

Veteran Dennis Hutchings, pictured, who is facing a murder trial over the death of 27-year-old John Pat Cunningham in Northern Ireland in June 1974 has warned Northern Ireland secretary Julian Smith he will take a judicial review to halt the case

Critics claim his case is proof of a ‘witch-hunt’ against soldiers who served during the Troubles.

The Daily Mail has long campaigned for an end to the hounding of our heroes. Mr Hutchings, who is seriously ill with kidney failure and heart disease, is due to stand trial on March 9.

But yesterday he launched a crowd-funding drive for his legal battle. Mr Hutchings, from Cornwall, said: ‘I spent 26 years serving my country and now I am being hung out to dry like a common criminal.

‘I want to put the Government in a position where they make good on their promise to protect veterans from these ludicrous witch-hunts so no one else is thrown to the wolves.

‘It is disgusting. I’ve spent five years’ on bail when I’m a sick man. And still they’ve come up with no new evidence. The politicians have got to get off their backsides and get on with looking after ex-soldiers.’

In a legal letter, he has warned Northern Ireland Secretary Julian Smith that he will bring a Judicial Review on the grounds that British veterans are suffering ‘discriminatory treatment’ by the criminal justice system.

Although 90 per cent of the 3,720 killings in Northern Ireland were at the hands of terrorists, police investigations have focused on the actions of British forces. Veterans who served at the height of the IRA’s terror campaign are 54 times more likely to face prosecution than Republican paramilitaries, according to his letter. 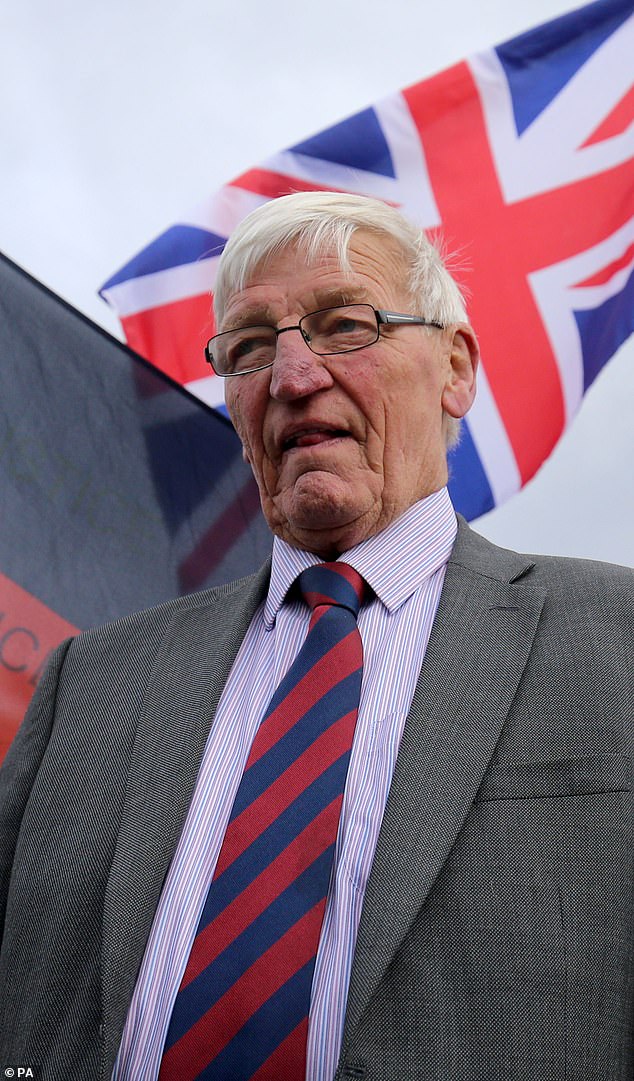 Mr Hutchings, from Cornwall, said: ‘I spent 26 years serving my country and now I am being hung out to dry like a common criminal’

Mr Hutchings’ lawyers say this contravenes Article 6 of the European Convention on Human Rights – the right to a fair trial.

The former corporal major has already been cleared twice over the events which took place in the mid-1970s. In June 1974, Mr Hutchings was leading a patrol of four soldiers in Eglish, County Tyrone, when they came across an IRA unit moving weapons ahead of an attack.

Two days later, the troops carried out a search of the area to track down the missing Republicans and came across Mr Cunningham, who they believed was an armed IRA suspect, near the village of Benburb.

As he ran away, members of the patrol opened fire, killing him. It later emerged the victim was an innocent member of the public who had the mental age of a child between six and ten.

Mr Hutchings was investigated and cleared at the time and the case was closed once again after a review in 2011.

But a legacy unit set up by the Police Service of Northern Ireland arrested him at his home in Cornwall in April 2015.

To contribute to Mr Hutchings’ campaign visit the webpage here