Dennis Hutchings, above, is seriously ill with kidney failure and heart disease

A dying Army veteran has appealed to the Prime Minister to intervene to end his prosecution over the death of an IRA suspect during the Troubles.

Dennis Hutchings, who is seriously ill with kidney failure and heart disease, said the stress of the court case had ‘the potential to prematurely end his life’.

The 77-year-old expressed concern that politicians were ‘washing their hands of their responsibilities’ to UK troops sent to fight terrorism in Northern Ireland.

He said his arrest and interrogation by the Police Service of Northern Ireland 41 years after the killing was ‘a form of torture’.

Mr Hutchings made his plea to No 10 after being hauled to court – despite no fresh evidence – to face attempted murder charges over the fatal shooting of John-Pat Cunningham, 27, in June 1974. If found guilty, he could be sentenced to a maximum 16 years in prison.

Writing on behalf of Mr Hutchings to Theresa May, lawyer Philip Barden said the retired soldier ‘needs your help’ and requested a meeting. He was investigated and cleared of the killing by the Director of Public Prosecutions at the time.

He assisted Northern Ireland’s Historical Enquiries Team reviewing the case in 2011, and was told the matter was closed. But after files were re-examined by the PSNI he was arrested at home in Cornwall in 2015 and taken to the province.

The retired Corporal Major with the Life Guards was detained for three-and-a-half days and questioned on 26 separate occasions.

Mr Barden added: ‘This was an unlawful denial of liberty and cause of mental distress … a form of torture.’ 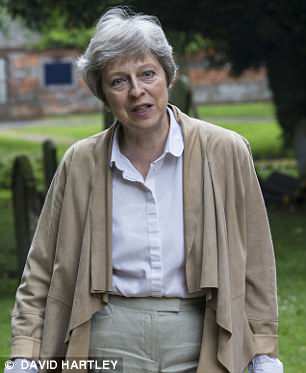 He said the letter given to Mr Hutchings informing him of his immunity from criminal charges was ‘apparently worthless’.

In June 1974, Mr Hutchings was leading a patrol in Co Tyrone that came across an IRA unit moving explosives. Four men were arrested and later convicted of terror offences. The rest fled.

In a search for the missing Republicans, troops found Mr Cunningham – believed to be an armed IRA suspect – who ran away.

Mr Hutchings says he acted lawfully. His trial is expected to take place later this year.