Dylan Dreyer and her husband Brian Fichera are celebrating their newborn son Russell ‘Rusty’ Fichera coming home from the hospital, where he had been in the neonatal intensive care unit after arriving six weeks early.

The Today meteorologist, 40, took to Instagram on Thursday to share a heartwarming photo of herself in her New York City apartment with Brian, their baby boy, their older sons Calvin and Oliver, and their dog.

Party of five: Dylan Dreyer and her husband Brian Fichera brought their newborn son Rusty home from the hospital on Thursday, a week after the baby was born 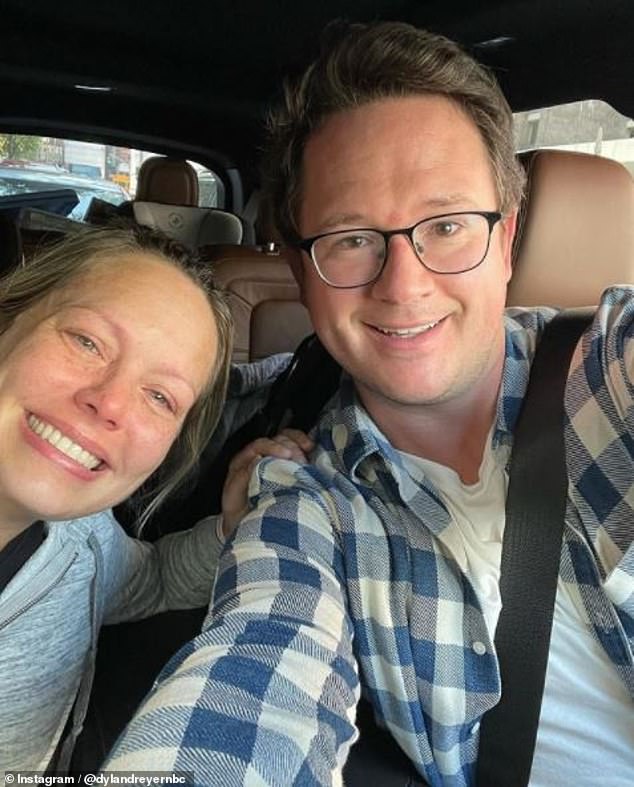 Tears of joy: Rusty had to stay in the NICU after arriving six weeks early, and both Dylan and Brian were overcome with emotion on the drive home from the hospital with their baby boy

The snapshot shows the family huddled on the couch together, with Brian cradling their newest addition while a smiling Dylan is embracing their dog.

Brian announced they were bringing Rusty home earlier that day, sharing a photo of himself driving home with Dylan, whose eyes were welled up with tears of joy.

‘He’s coming home!’ the NBC News cameraman wrote. ‘Driving home 13 inches an hour on the FDR with fish swimming in my eyes like I just watched the end of Forrest Gump, My Girl and ET combined. #welcomehomerusty.’

Rusty was born at 2:38 am on September 29, just hours after Dylan revealed that she had been hospitalized when her water unexpectedly broke six weeks early.

Brian shared the first photo of Rusty later that day. In the sweet snap, Dylan is pictured sitting up in her hospital bed with baby Rusty sleeping soundly on her chest. 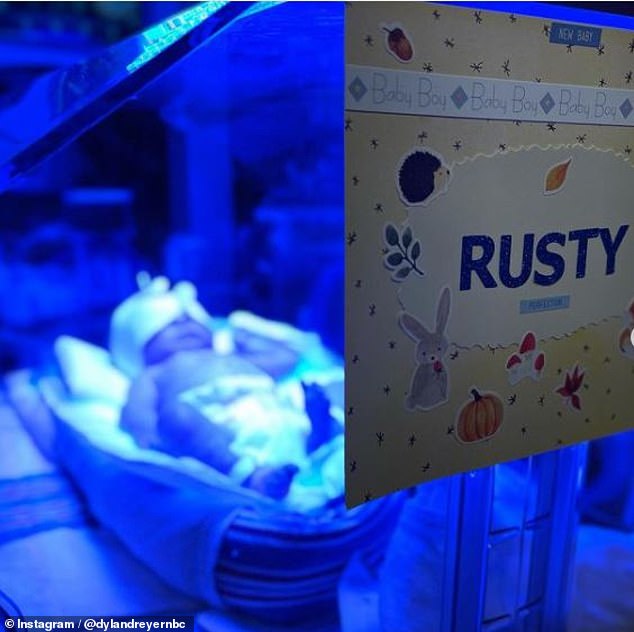 Candid: A few days after Rusty was born, Dylan shared photos of him in the NICU at NewYork-Presbyterian Hospital, where she welcomed all three of her sons 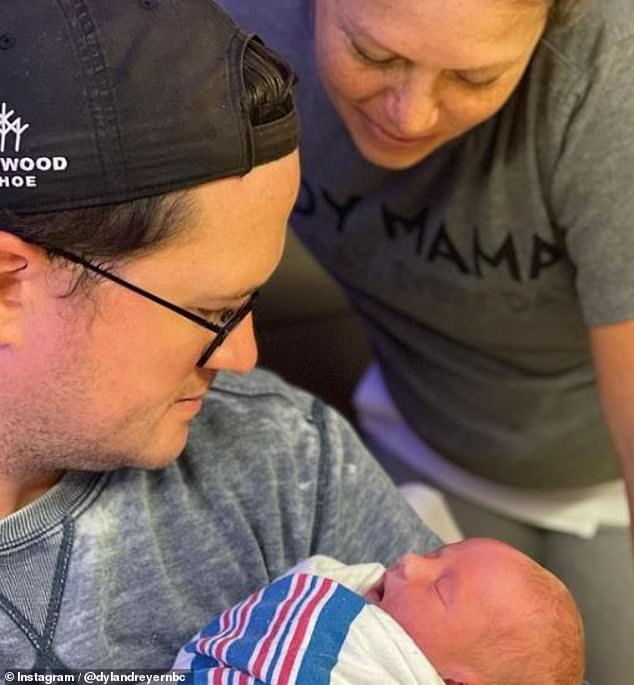 Happy parents: Dylan also included heartwarming snapshots of Brian holding their son in the hospital while she looked at the baby in awe 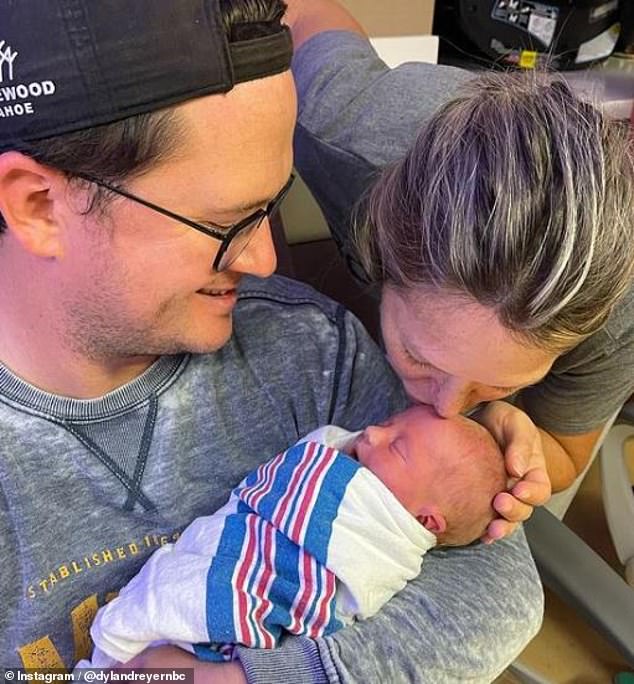 The mother of three is wearing a blue medical face mask while her tiny tot is seen in a blue-and-pink striped hat, complete with adorable little ears.

‘Guys this is our son Russell James Fichera,’ the proud dad wrote in the caption. ‘Rusty managed to expedite immense love and joy into the world 6 weeks earlier than expected.

‘His mother, @dylandreyernbc already went beyond what I thought possible a human could do to safely bring him into this world. I’m in awe and in love. Thank you for all of your well wishes and support. #love #numbathree #mythreesons #godylgo.’

A few days later, Dylan posted photos of Rusty in the NICU at NewYork-Presbyterian Hospital while thanking the nurses and doctors who cared for their son.

In one of the images, the NBC star is seen kissing her baby boy on the forehead while Brian holds him in his arms. Others show the baby in an incubator in the NICU. 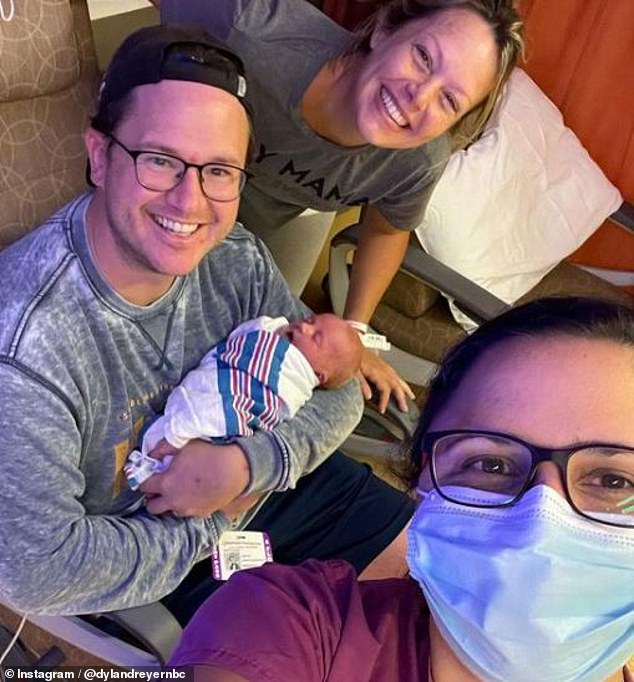 Grateful: In the caption, Dylan thanked the team of doctors and nurses who cared for her son in the NICU 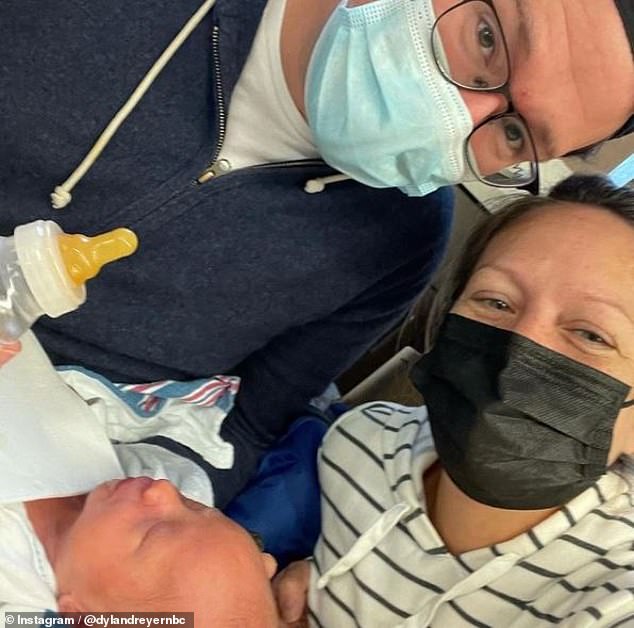 Whoops! Both Dylan and Brian have been so preoccupied with their son coming six weeks early that they both forgot their nine-year wedding anniversary

‘I am so full of emotion and gratitude for this past week. God has blessed us with baby Russell earlier than expected but taken care of us the whole way. I couldn’t imagine waiting until November to meet him,’ she wrote.

‘Our stay at @nyphospital of Lower Manhattan, a smaller, more home-like hospital, once again went above and beyond,’ she continued. ‘All 3 of our boys now have been born here.

‘I’m in awe of all the doctors and nurses and what’s they’ve done for us, making us feel safe and comfortable. The NICU nurses and doctors are indescribable…through all this we never felt scared or worried.’

While it was difficult to leave the hospital without Rusty, Dylan said it helped to know that her son was in the care of an amazing team of medical professionals at the hospital.

‘My heart aches having to leave here without Rusty but I also feel better knowing he’ll continue to be monitored and remain in the best hands,’ she shared. ‘He’s THRIVING! Growing, getting stronger, eating and breathing on his own.’ 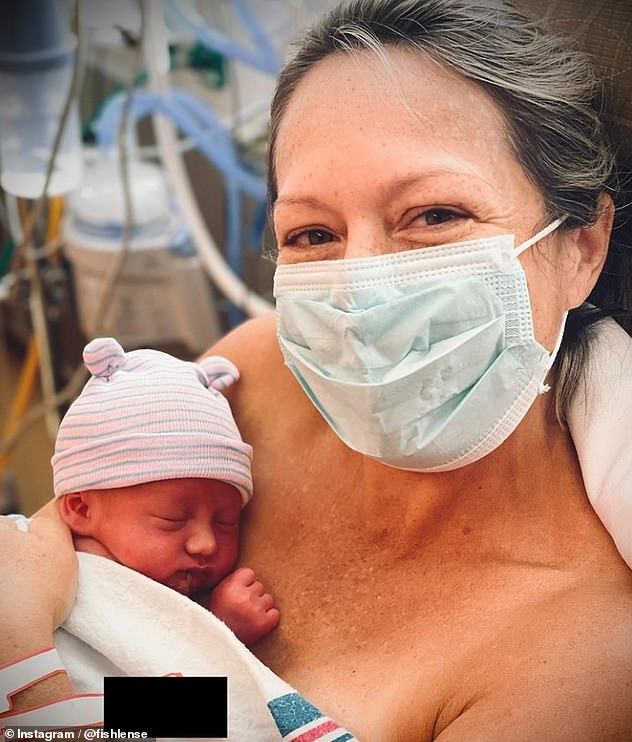 New arrival! The couple welcomed Rusty at 2:38 am on September 29 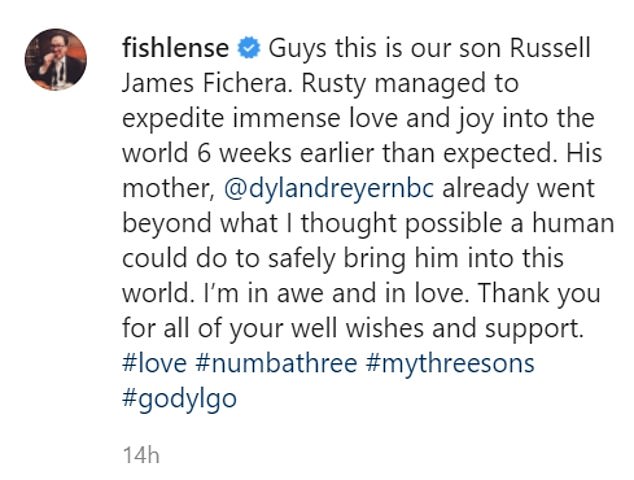 Overjoyed: NBC News cameraman Brian described himself as being ‘in awe and in love’ as he shared the first image of Dylan cuddling Rusty in the hospital

Dylan concluded the post with a message for her son, writing: ‘Buddy, you have no idea what’s in store for you at home so keep on rushing and get home as soon as you can! We love you more than words could ever say!’

The parents have been so distracted by their baby boy’s early arrival that they both admittedly forgot their nine-year wedding anniversary.

Brian shared a similar sentiment when he posted a snapshot of himself and Dylan feeding their youngest child.

‘Kid came 6 weeks early I don’t even know what year it is let alone what the date is,’ he admitted. ‘Remember what I said the last 8 anniversary posts? Copy paste. Happy anniversary to the only one who I care that finds this funny.’

News of baby Rusty’s birth was shared by Dylan’s Today co-hosts  Hoda Kotb and Savannah Guthrie on the morning of September 29. 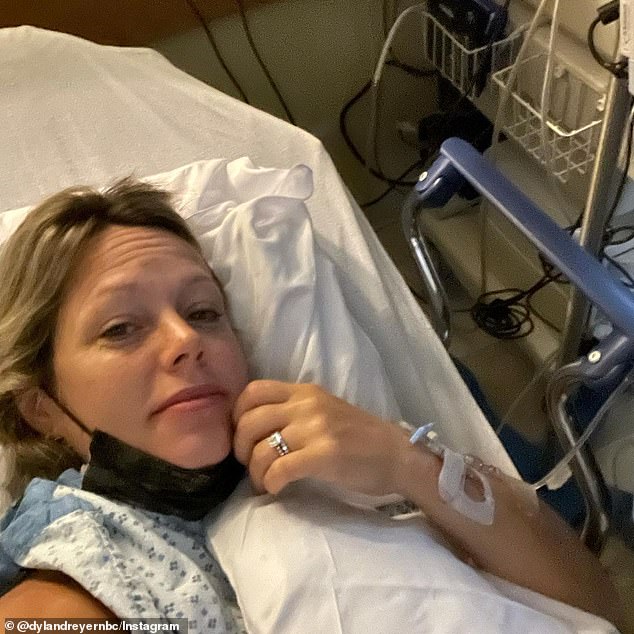 Struggle: The day before she gave birth, Dylan revealed on Instagram that she had been hospitalized when her water broke six weeks early and asked fans for their ‘prayers’ 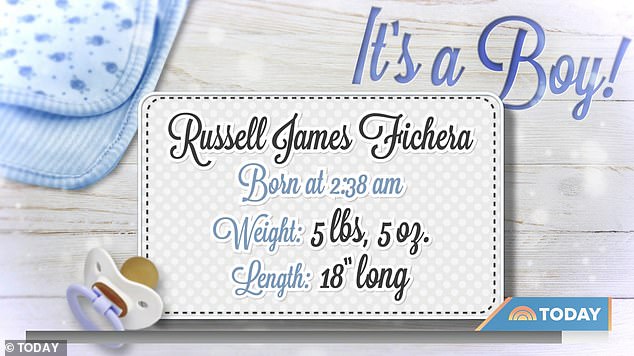 Exciting: News of baby Rusty’s arrival was shared on the Today show on the morning of September 29, with Dylan’s co-stars revealing he weighed 5 lbs, 5 oz at birth

Hoda revealed that both ‘mom and babe [are] doing just fine,’ despite the baby coming six weeks earlier than expected. They also added that he weighed in at 5 lbs, 5 oz and measured 18 inches long at birth.

The day before Rusty’s birth, Dylan shared photos of herself in the hospital, explaining that her water had broken six weeks ahead of schedule and her son was likely going to be born early.

‘Just a little update as you won’t be seeing me on @todayshow or @3rdhourtoday for a while.’ she wrote. ‘My water broke Sunday evening and I’ve been hanging at the hospital. Our little guy is anxious to get out and meet us!’

One of the snapshots was a selfie that she took while lying in her hospital bed with her black face mask pulled down. The other was a picture of her smiling and hanging out with her husband Brian.

Good news: Despite the premature arrival, Hoda Kotb, 57, (right) said that ‘mom and babe [were] doing just fine,’ joking that Russell ‘could not stay’ any longer 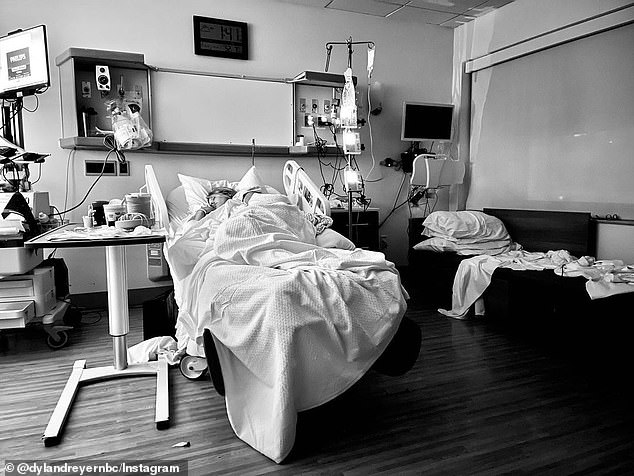 Behind-the-scenes: Brian also opened up about Dylan being in the hospital ahead of Rusty’s birth while sharing a black and white photo of his wife asleep in her bed 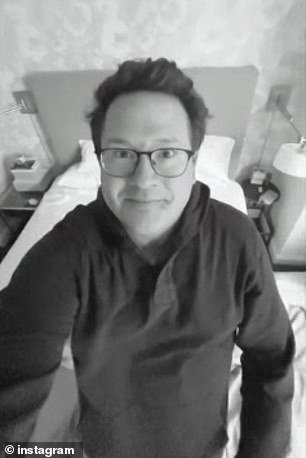 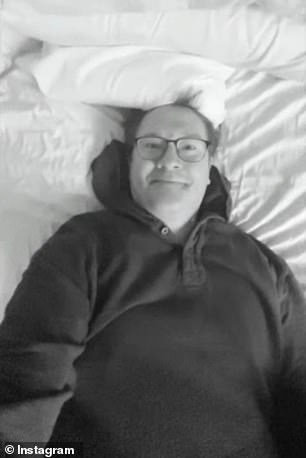 Tired: Brian, who had been sleeping on a pull-out bed in the hospital, filmed himself flopping onto his bed while picking up some things for Dylan at their New York City apartment

‘Doctors are closely monitoring both of us and trying to keep him on the inside for a little while longer to get stronger,’ she explained. ‘All is well! I’m in great hands and I have the best person to keep me calm and comfortable. Looks like we’ll be getting to meet our littlest boy sometime this week…six weeks early!’

Dylan joked that her third child couldn’t wait to meet his big brothers.

‘Guess he couldn’t handle being left out of all the fun his brothers have been having!’ she concluded the post. ‘We’ll gladly take any extra prayers you have.’

Brian also opened up about Dylan being in the hospital while sharing a black and white photo of his wife asleep in her bed.

‘A few extra sleepless nights on the pull-out bed is more than a fair trade to make sure everyone is as safe and healthy as possible when it comes time [to] meet this impatient little guy,’ he wrote.

‘Son, if you have just half of your mom’s courage and general bad a**ery you’re going to be something special.’ 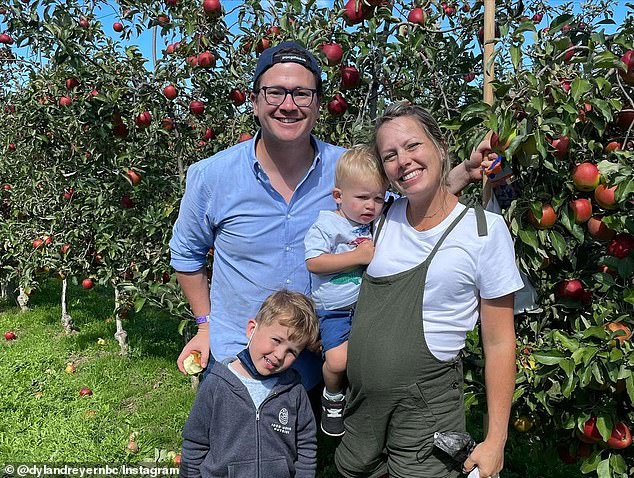 Fun day: Dylan and Brian took their older sons Calvin, four, and Oliver, one, apple picking the weekend before her water broke 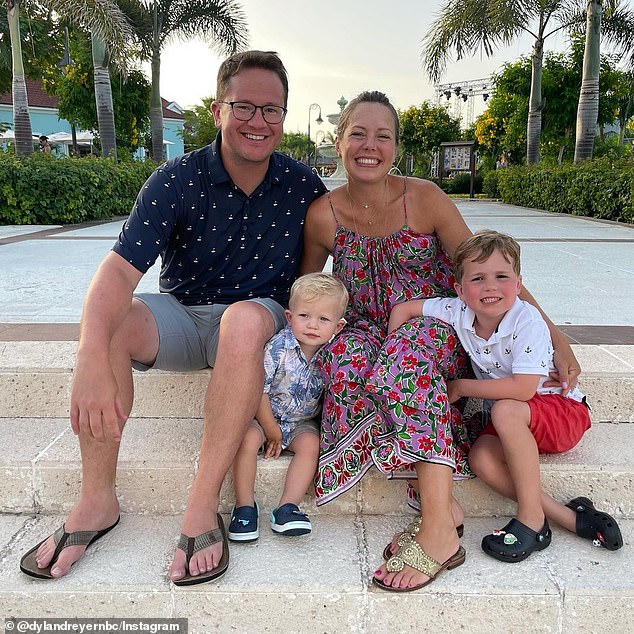 Can’t wait: Dylan joked that her baby was trying to come out early because he ‘couldn’t handle being left out of all the fun his brothers have been having’

While Brian had no problem sleeping at the hospital, he admitted he missed his bed. In a follow-up post, he shared a black and white video of himself flopping into their bed in their apartment.

‘When your wife sends you home from the hospital to grab some things and you catch a glimpse of your bed after spending the last couple nights on the hospital cot….. #babywatch #expecting #babynumber3,’ he captioned the clip.

Dylan revealed she was pregnant with her third baby boy in May, two years after she welcomed her second son Oliver following a heartbreaking miscarriage and infertility struggles.

She shared the happy news live on-air during a special edition of her ‘Cooking With Cal’ segment in which she whips up different dishes with her oldest son. This time, they baked cinnamon buns while joking about having a ‘bun in the oven.’

Dylan explained on the second hour of the morning show that she and her husband had all but given up on conceiving a third child after once again facing infertility issues.

‘We were trying for a third, and it wasn’t happening. So we thought let’s forget about it, move on,’ she said. ‘Then boom, surprise!’ 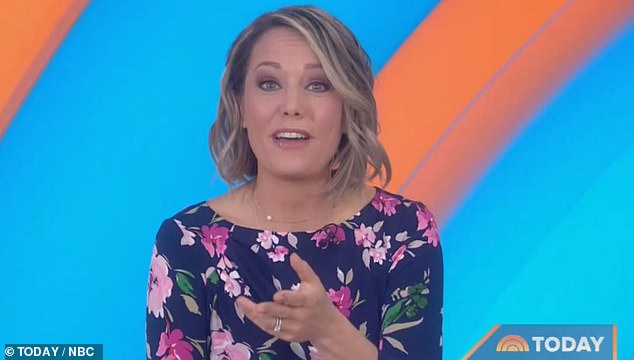 Surprise! Dylan announced she was pregnant with her third child on the Today show in May, saying she was due in November 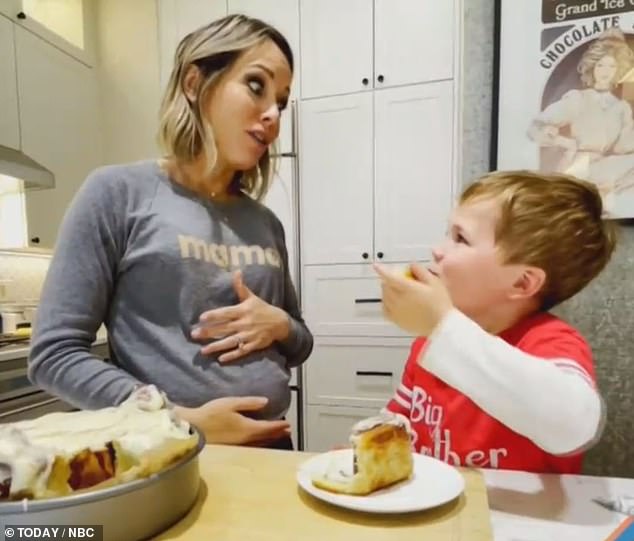 ‘Bun in the oven!’ Dylan shared the news of her pregnancy during a tongue-in-cheek cooking video with her son Calvin in which she revealed her baby bump for the first time

Magic number! The expectant mom revealed she was having a boy by getting her co-hosts Al Roker, Sheinelle Jones, and Craig Melvin to hold up boxes with cinnamon rolls in them

The meteorologist didn’t say exactly how far along she was at the time, but she did share that she was due in November.

Her Today co-hosts Savannah and Hoda insisted that they ‘knew it,’ admitting they had actually exchanged text messages in which they speculated that she might be pregnant again. But they were still stunned by how well she managed to keep her growing baby bump concealed.

Dylan joked that she used two invaluable tools to hide her growing tummy: her ‘tightest Spanx’ and a large water bottle, which she carried around in front of her stomach.

On the show’s third hour, she announced the baby’s gender, delightedly sharing that she is having a third boy by having her co-hosts hold up cinnamon roll boxes with the letters ‘B-O-Y’ inside.

Dylan and Brian’s second son Oliver was conceived amid their infertility battle, during which she suffered a first-trimester miscarriage in early 2019 when she was five weeks pregnant.

They were actually preparing to undergo their first round of IVF treatment when she made the shocking discovery that she had conceived a second child naturally.

‘I was just waiting for the phone call from [my doctor], to tell me how much of each drug to use,’ she said at the time. ‘Instead, when he called, he said, “Well, you can’t start IVF because you’re already pregnant!” We were in complete shock. We couldn’t believe it!’