Dylan Dreyer has revealed that she had a painful case of mastitis just days before her husband Brian Fichera began experiencing ‘debilitating’ coronavirus symptoms of coronavirus — leaving her to care for their two young sons by herself while he was in self-isolation.

The 38-year-old old Today meteorologist was so sick with mastitis — an inflammation of breast tissue — in late March that she initially feared she had contracted the coronavirus.

‘I woke up one night with a 102-degree fever, chills, the works,’ she told People. ‘I felt absolutely awful. But then I went on antibiotics, and I was totally fine.’

What a month! Dylan Dreyer revealed she suffered from painful case of mastitis just days before her husband Brian Fichera was diagnosed with coronavirus 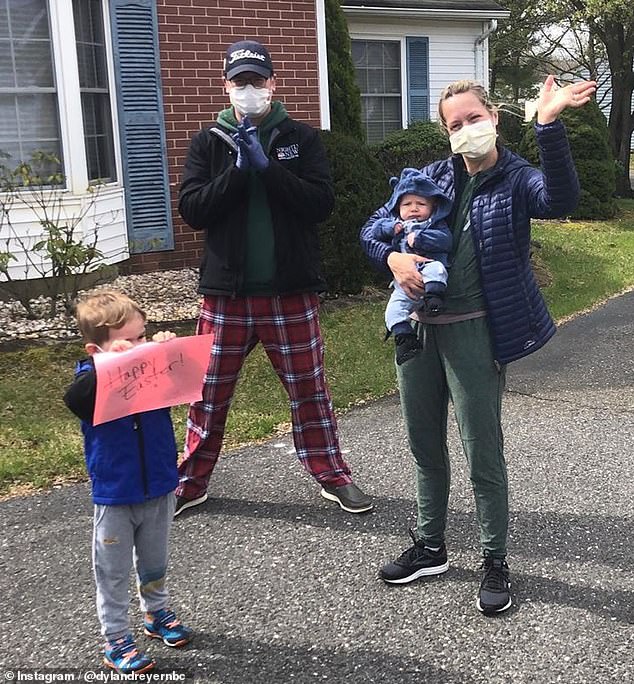 Fears: Dylan said she woke up with a ‘fever’ and ‘chills’ in late March and initially feared she had contracted the virus, but it was actually mastitis. She was able to clear it up with antibiotics

Mastitis most commonly affects women who are breastfeeding and can sometimes involve an infection. Symptoms include breast pain, swelling, fever, and feeling run down.

Just days later, her husband Brian, 33, ‘spiked a fever’ and had ‘alarming stomach issues’ that led them to believe he had contracted coronavirus.

The NBC cameraman, who was diagnosed with COVID-19 earlier this month, spent 10 days self-isolating in their three-year-old son Calvin’s bedroom in their New York City apartment to try to keep their family safe.

While he was sick and experiencing debilitating’ symptoms that had him tears, Dylan had to take care of Calvin and their three-month-old baby boy Oliver.

‘I like to say that I was an A+ mom during those two weeks, because I felt like supermom,’ she told People. ‘I was up all night with the baby, and I was keeping everybody happy and fed during the day.’

Dylan admitted that she was so busy taking care of her children that she didn’t have time to help nurse Brian back to health. 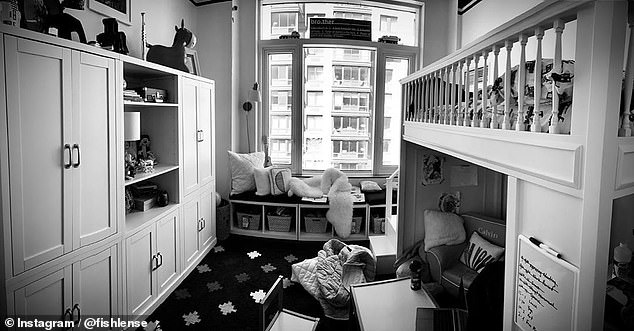 Tight quarters: Dylan took care of their three-year-old son Calvin and three-month-old son Oliver by herself for nearly two weeks while Brian self-isolated in their eldest child’s room 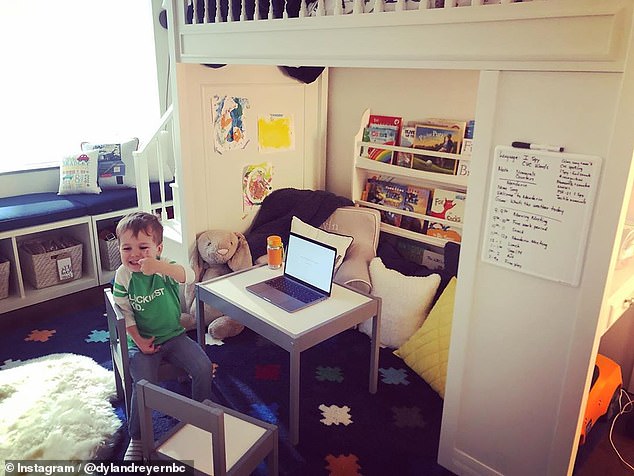 Hard to handle: In addition to taking care of two young children, Calvin’s schooling is now being done on Zoom

‘I definitely failed at being a wife because I’m like, “You know what?” I’ll make you toast but I’ve got so much going on and I can’t do it all right now,”‘ she said. ‘And I feel so guilty that I did that, but I didn’t have time to baby Brian.’

After Brian’s diagnosis, Dylan assumed for a second time that she had contracted coronavirus when she lost her sense of taste and smell — a common coronavirus symptom — but she was never able to get tested.

She said that their baby boy Oliver also ran a fever for three weeks while they were in quarantine, though they can’t say for sure if either of them had the highly contagious illness.

Dylan went on maternity leave in January and will be returning to the Today show on May 14, but like the majority of her costars, she will be filming from home.

She commemorated her last week of maternity on Monday by sharing a precious photo of baby Oliver sound asleep with his arms stretched above his head.

‘One week left of maternity leave! I remember at this point with Calvin, I was so emotional thinking about heading back to work,’ she wrote on Instagram. ‘It’s very strange to think this time next week, my commute to work will be from my bedroom to my living room. 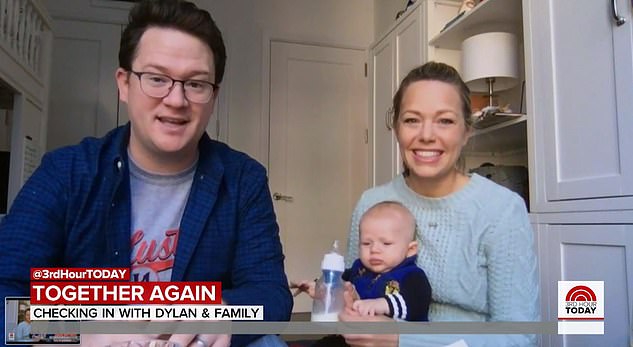 Update: Dylan and Brian called into the Today show earlier this month to talk about his ‘really scary’ bout with coronavirus 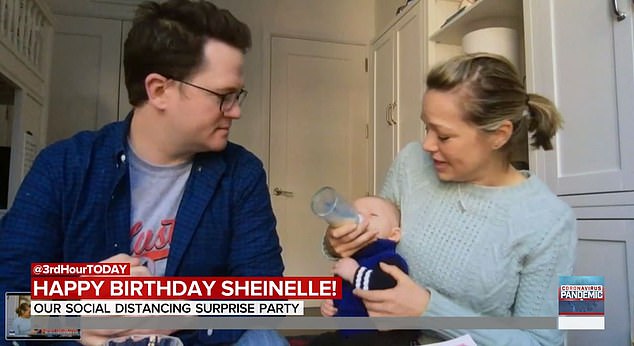 Stress: ‘The scary part was that we’re stuck in a New York apartment. We’ve got a newborn and Calvin, and we’re trying to keep everybody safe,’ Dylan recalled

‘It’s a bittersweet way to rejoin my @3rdhourtoday family but I’m really looking forward to being with everyone again!’

Dylan told People that Brian will probably take their sons for a walk when she’s broadcasting the show live from their home from 9 a.m. to 9:30 p.m.

‘I think that’ll help a lot,’ she said, adding: ‘Calvin’s got his mask, and he’s always wearing it every time he goes outside. If we open the door without the masks, Calvin’s the one yelling at us like, “Mask mommy, you need your mask!”‘

The couple was with their nearly four-month-old son Oliver when they appeared on the third hour of the morning show with Dylan’s co-hosts Craig Melvin, Al Roker, and Sheinelle Jones.

‘I’m much better. I am well over a week without symptoms, but it was hairy,’ Brian said of his recovery. ‘It was really scary. It’s serious.’ 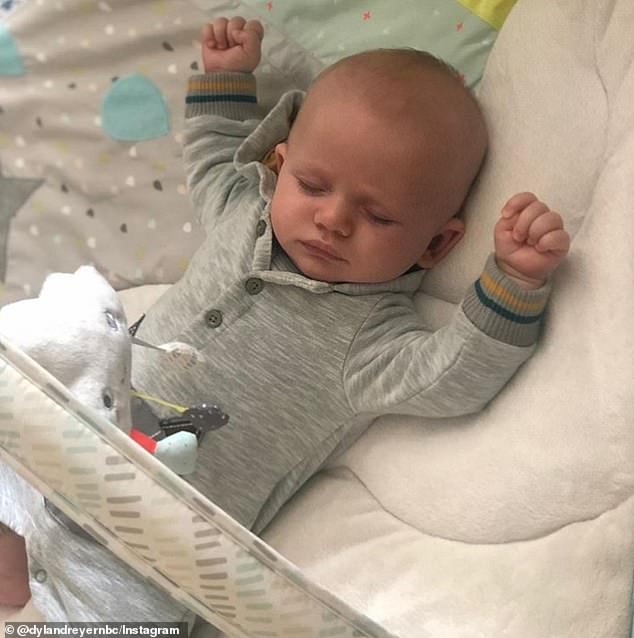 Work from home: Dylan went on maternity leave in January and will be returning to the Today show on May 14, but like the majority of her costars, she will be filming from home 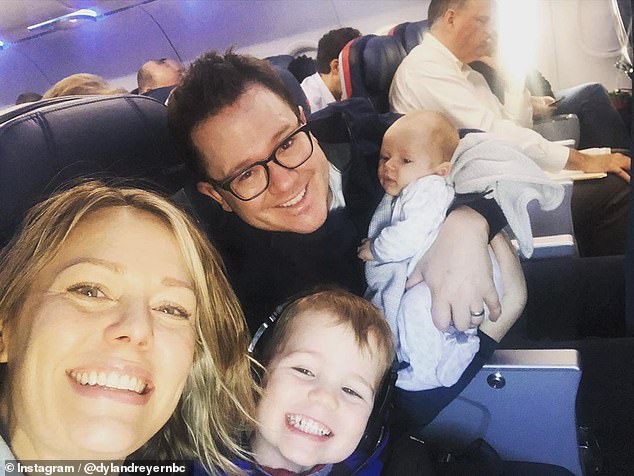 Also sick? After Brian’s diagnosis, Dylan lost her sense of taste and smell, a common COVID-19 symptom, but she was never able to get tested. Oliver also ran a fever for three weeks

Dylan said one of the hardest things was keeping Brian away from the rest of their family for days on end.

‘The scary part was that we’re stuck in a New York apartment. We’ve got a newborn and Calvin, and we’re trying to keep everybody safe,’ she recalled, explaining they were calling in from her eldest son’s bedroom.

‘Brian quarantined himself in this room because it’s really the only place he could go,’ she said. ‘There’s no basement. There’s no spare bedrooms’

‘You dealt with it on your own because I was with the kids,’ she told Brian, who joked: Our neighbors saw a grown man getting out of a bunk bed every day.’

The dad revealed in a candid Instagram post on April 15 that he had tested positive for coronavirus while describing the symptoms that had him crying in self-isolation.

He wrote that he has been symptom-free for a week after officially being diagnosed with COVID-19 earlier this month.

‘The headaches were debilitating. No amount of Tylenol could put a dent in my headaches or temperature,’ he wrote. ‘There was also an emotional component to this disease. I cried. A LOT. I never cry (unless homeward bound or Forrest Gump is on TV).

‘After six days it was deemed necessary by the hotline I called that I take a test…it was positive. I had it.’