E-cigarettes ARE a gateway to teenage tobacco smoking

Teenagers who use electronic cigarettes are nearly twice as likely to go on to become regular tobacco smokers, researchers have found.

The study of 44,000 schoolchildren will fuel growing concerns that ‘vaping’ may act as a ‘gateway’ to smoking.

The researchers warned e-cigarettes may help to ‘re-normalise’ smoking after years of a growing taboo about the habit – and warned it would be ‘foolhardy’ to dismiss the theory that early exposure to nicotine increases smoking uptake.

Health experts in Britain view e-cigarettes as a crucial tool in the fight against tobacco – and last month Public Health England controversially endorsed the devices in its Stoptober campaign.

But others are concerned about unresolved safety concerns and are particularly worried about their use among young people.

Schoolchildren in England are now more likely to have tried e-cigarettes than traditional cigarettes, with more than one in three 15-year-olds having used the devices, despite the fact it has been illegal to sell them to under-18s since October 2015.

The Canadian study of 44,000 schoolchildren in Alberta and Ontario  fuels growing concerns that vaping acts as a ‘gateway’ to smoking after researchers found that teens who vapped were  79 per cent more likely to become daily tobacco smokers

Experts have repeatedly claimed this is only experimentation – and insist there is no evidence young people regularly use the gadgets.

The new study, however, casts doubt on that claim.

more likely than non e-cigarette users to have smoked at least one whole tobacco cigarette a year later.

Crucially, however, they were also 79 per cent more likely to become daily tobacco smokers in the intervening year.

The researchers, from the University of Waterloo, writing in the Canadian Medical Association Journal, said: ‘E-cigarette use was strongly associated with cigarette smoking behaviour, including smoking initiation at follow-up.’

They admitted they were not entirely sure that e-cigarettes had caused the tobacco take-up – stressing the ‘association is unclear’.

But he admitted: ‘However, the association between e-cigarettes and smoking may simply reflect common factors rather than a causal effect: the same individual and social risk factors that increase e-cigarette use may also increase the likelihood of youth smoking.’

His team wrote: ‘The findings from our study provide support for both sides of the debate. It is highly plausible that ‘common factors’ account for a substantial proportion of increased cigarette-smoking initiation among e-cigarette users.

‘At the same time, it would be foolhardy to dismiss the likelihood that early exposure to nicotine via e-cigarettes increases smoking uptake.’

E-cigarettes contain a liquid form of nicotine that is heated into vapour to be inhaled, avoiding the harm caused by tobacco smoke. 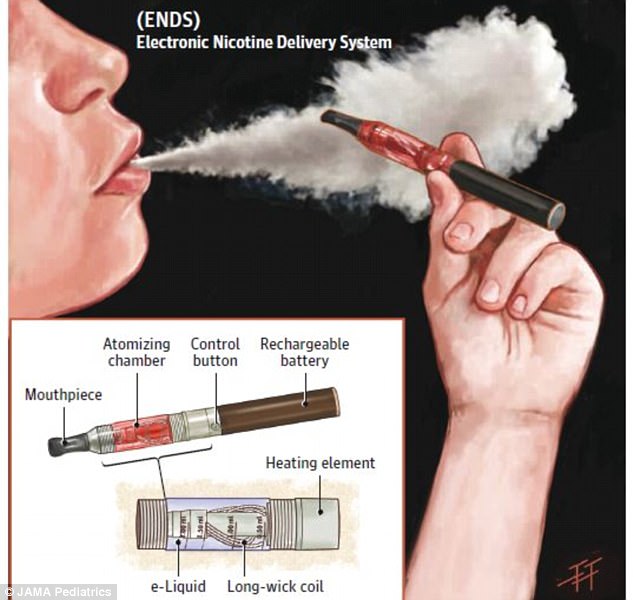 Vaping has boomed as a business but research into the new form of nicotine consumption is still in its infancy. This diagram shows the components to an electronic cigarette

Around three million adults in Britain have used e-cigarettes in the decade or so that they have been on the market.

Health experts agree that the devices are much safer than smoking tobacco – and the gadgets are thought to have helped 22,000 people quit smoking each year.

But the Commons Science and Technology committee last week launched an inquiry into their use, warning of ‘significant gaps’ in knowledge over the impact that they have on health.

One of the fiercely contested aspects of these gaps is use of the gadgets among youg people.

Europe’s highest legal expert, Dr Juliane Kokott, the advocate general to the European Court of Justice, in 2015 warned that e-cigarettes ‘possibly cause risks to human health’ and that they may provide a ‘gateway’ for teenagers to start smoking tobacco.

But Public Health England says the devices are ‘95 per cent safe’ – and ‘must be clearly positioned as products that help adult smokers to quit’.

According to the NHS Digital report Statistics on Smoking, published in June 2017, 35 per cent of 15 year olds reported having ever used an e-cigarette.

Of pupils of all ages at secondary school, 22 per cent reported having tried e-cigarettes at least once – compared to just 18 per cent of traditional cigarettes.

A spokesman for the UK Vaping Industry Association said: ‘We welcome all research into e-cigarettes and vaping products, however this study merely shows that those who try e-cigarettes are also likely to have also tried tobacco. This is by no means a secret.

‘There is no research to suggest that vaping is a gateway to smoking tobacco and this study does nothing to change that fact.

‘The use of vaping products by young people remains very low.

‘Whilst the industry has a responsibility to market their products responsibly, vaping has an important role to play in smoking cessation and represents a huge public health opportunity for this country.’