E-scooter rider in Brisbane, Queensland, loses his licence for speeding

A Queensland man has been handed the country’s toughest ever e-scooter penalty after speeding past a frightened cyclist at 94km/h while helmet-free.

Brisbane cyclist Scott Lewis was riding on a bikeway beside the Western Freeway on September 12 when his bike camera caught the moment daredevil e-scooter rider Owen Bagi, 36, flew past him.

When questioned by Mr Lewis, Bagi said he’d been travelling 94km/h because he was ‘trying to get to work’.

Bagi has worked at a CBD e-scooter store for more than three years. He even starred in one of its commercials, saying ‘people just want to go fast now’.

It is understood at the time of the incident he was on his way to a second job, which he has since lost.

Bagi was riding a Dragon Warrior X11 which is advertised as an ‘off road’ vehicle that is more motorbike than scooter and can reach speeds of 100km/h.

Keen to see the rogue scooter rider brought to justice, Mr Lewis submitted his footage to A Current Affair in October which lead to police submissions and the eventual identification of Bagi.

Bagi later attended court and told the magistrate he had been doing 48km/h when he passed Mr Lewis but went over 90km/h on a straight with no other riders around.

He was handed the minimum penalty for a dangerous driving offence, the six-month disqualification of his drivers licence. 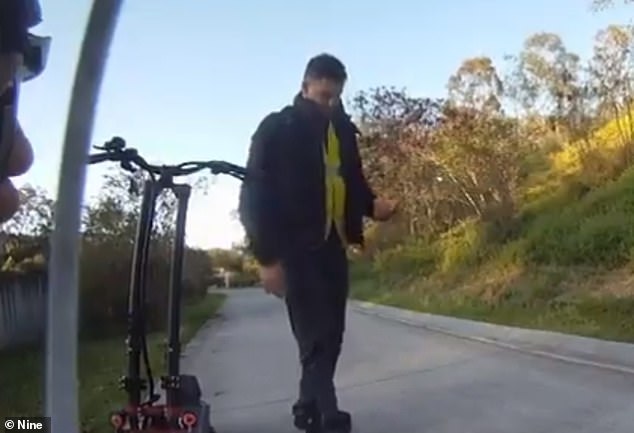 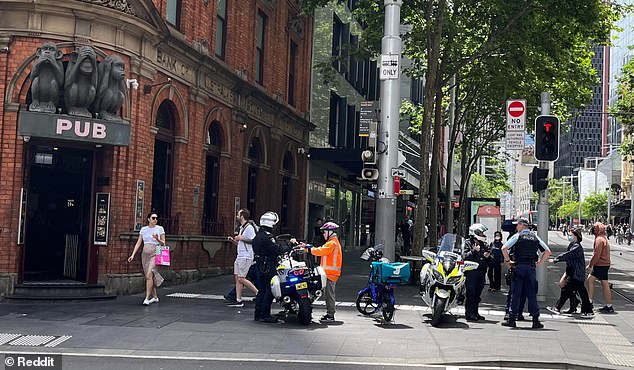 Police have also been spotted cracking down on e-scooter riders in other major cities, including Sydney

‘I put myself at risk and I could have hurt myself seriously but at the end of the day I’m just a guy that was scared, trying to get his job done,’ Bagi told A Current Affair.

‘At the end of the day, you’re only putting yourself at risk.

‘I risked way too much and I made a really big loss today.’

Police have also been spotted cracking down on e-scooter riders in other major cities, including Sydney.

A photo of three policemen fining a CBD delivery e-bike rider was shared to Reddit on Wednesday with the poster sarcastically writing ‘some more really high value targets being taken off the streets today’.

Several commenters under the post said police often target cyclists riding on footpaths but added its too unsafe to ride on the road in the city’s CBD.

‘Yes, cycling on the footpath is illegal and dangerous but cycling in Sydney sucks 99 per cent of the time,’ one person wrote.

‘I’d rather cop the fine than risk my life trying to ride on most the roads in Sydney,’ another said.