Eager sun seekers camp out overnight on the sand at Bournemouth

Eager sunseekers camped out on the sand at Bournemouth beach last night as they clambered to be first in line for another scorching day with temperatures expected to rise to 91F (33C).

Tents were seen dotted along the sea front this morning after the warm weather yesterday brought lockdown-weary revelers out in vast swathes – with many ignoring social distancing rules.

Others cast aside tents all together, instead opting to sleep under the stars, lying on the sand or on deck chairs.

But sunbathers should soak up the rays while they can as torrential rain and ‘severe’ thunderstorms set to batter the country from Tuesday – with floods and hailstones posing a risk to homes and businesses, the Met Office warned.

Yellow weather warnings have been issued, warning residents to ‘be alert’ to the risk of flooded buildings and disruption to public transport.

Dan Harris, Met Office deputy chief meteorologist, said thunderstorms are on the way, with some places likely to be hit with up to 80mm of rain in just a few hours. 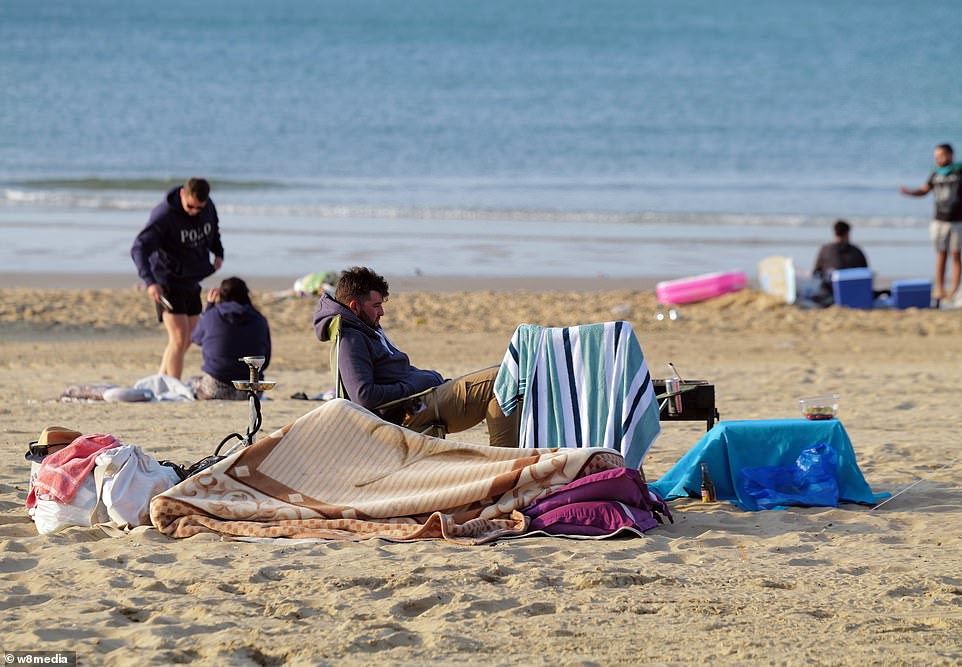 Others in Bournemouth cast aside tents all together, instead opting to sleep under the stars, lying on the sand or on deck chairs 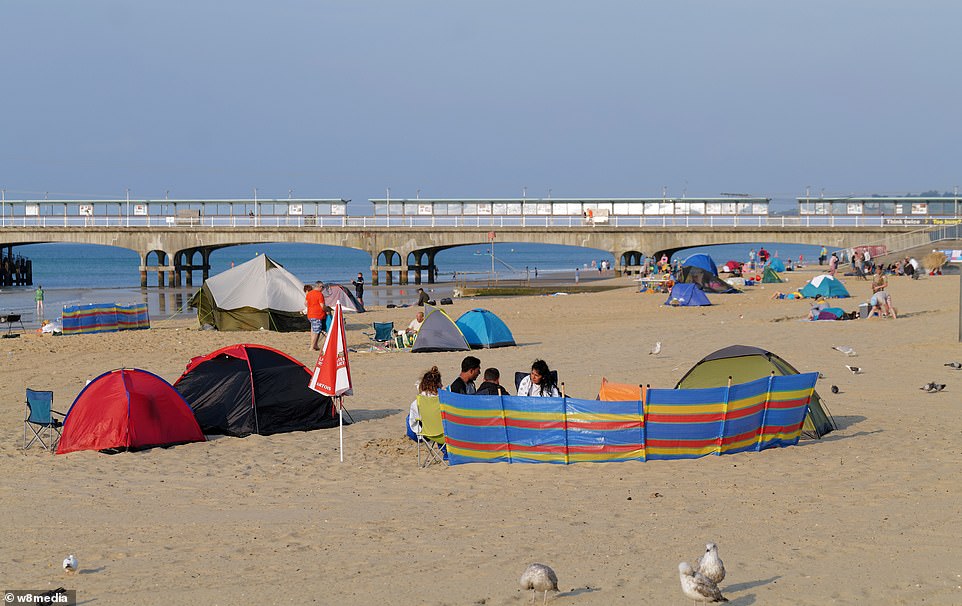 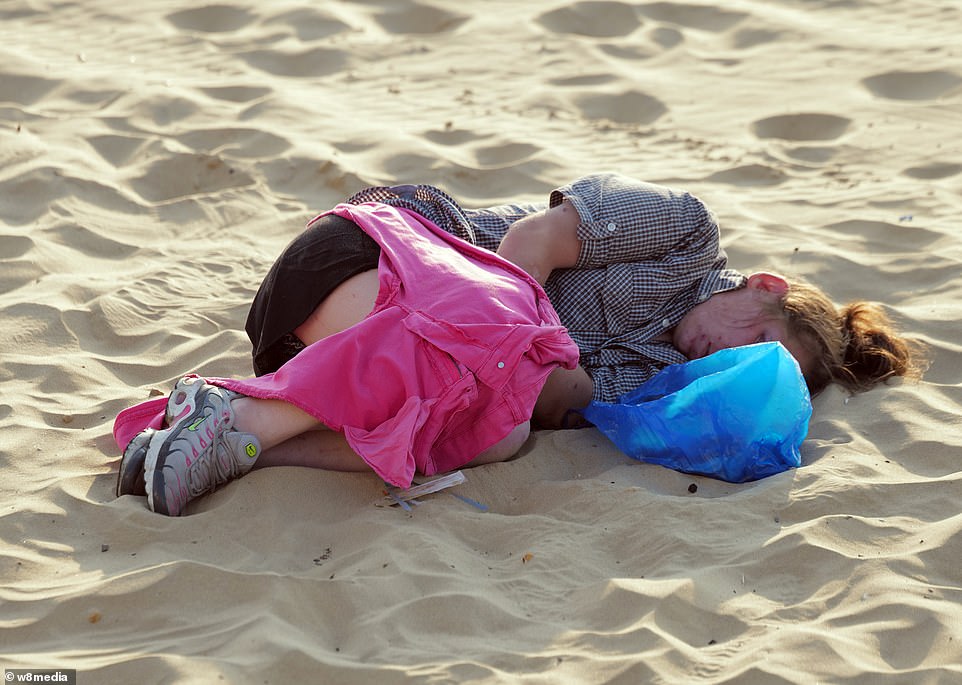 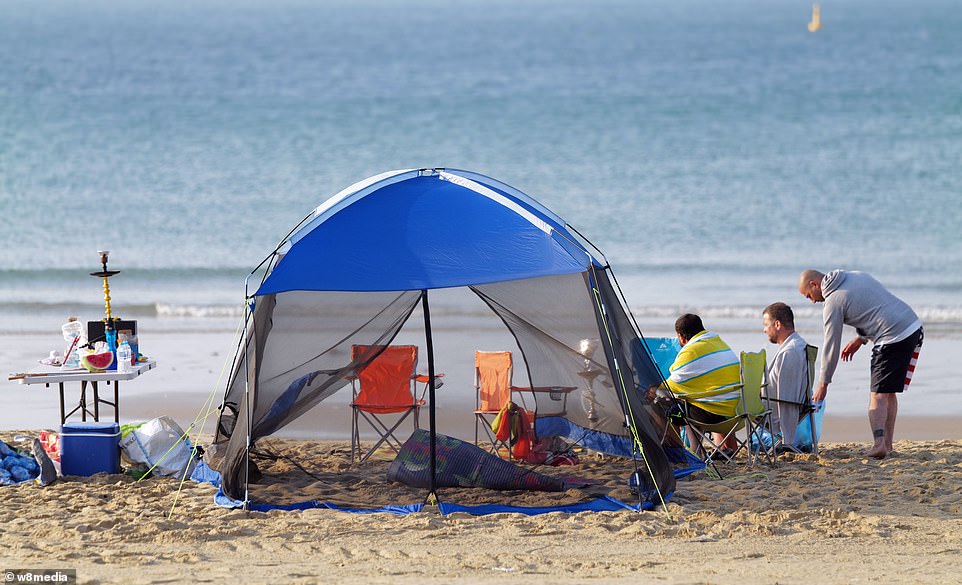 Various tents were scattered along the coast. This one had a table with food and drinks on it. The tent’s residents appear to have slept on mats 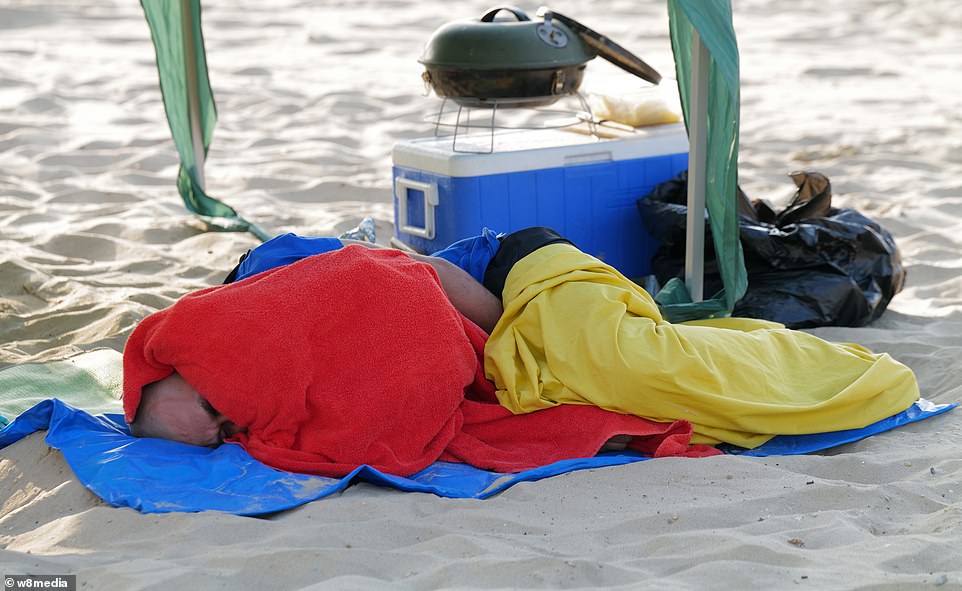 This man opted to sleep under the stars, lying on a mat with what appears to be a towel draped over his face to shield his eyes from the sun 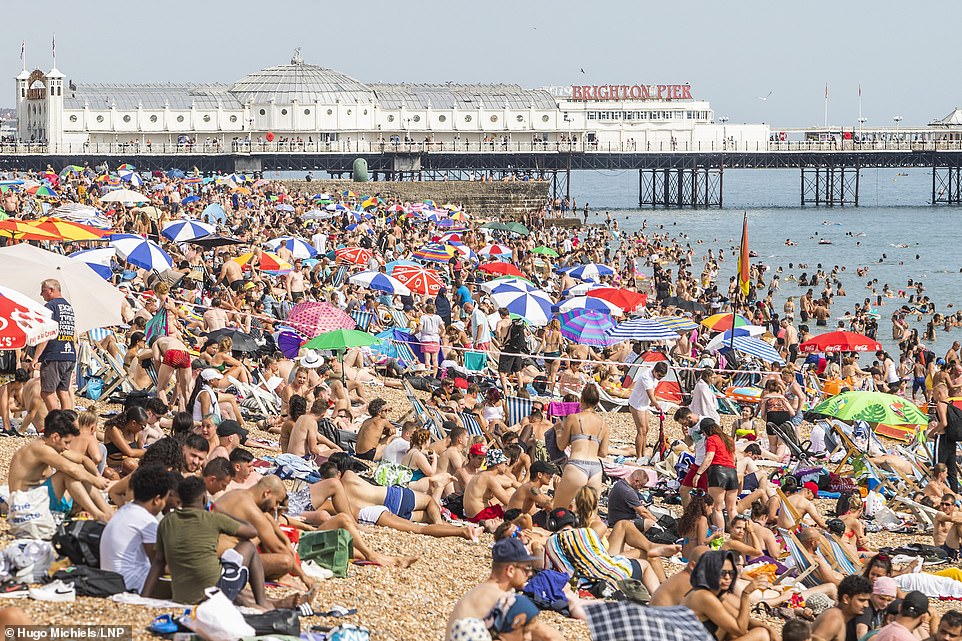 ‘We’ve issued a broad thunderstorm warning for Monday and Tuesday for all parts of the UK, since although the ingredients are there, it’s just too early to pinpoint the details of exactly where and when thunderstorms will occur,’ he said.

‘As such, we will be monitoring the developing signals closely and I urge people to keep a close eye on Met Office warnings and forecasts over the coming days.’

Saturday’s top temperature was 94F (34.5C) at Frittenden in Kent, Wiggonholt in West Sussex, and Herstmonceux in East Sussex, the Met Office said.

The heat brought with it a number of water-related tragedies yesterday as a man in his 20s drowned in a quarry, a six-year-old boy almost died after his inflatable swan was swept out to sea and men were pictured jumping into the water at Durdle Door – an activity that critically injured two men in May.

In North Wales, described as being a scene of ‘bedlam’ on Friday, a councillor’s plea for visitors to avoid towns was ignored as the local police force reported a ‘considerable build up’ of traffic in Abersoch while drivers made their way to the beach. 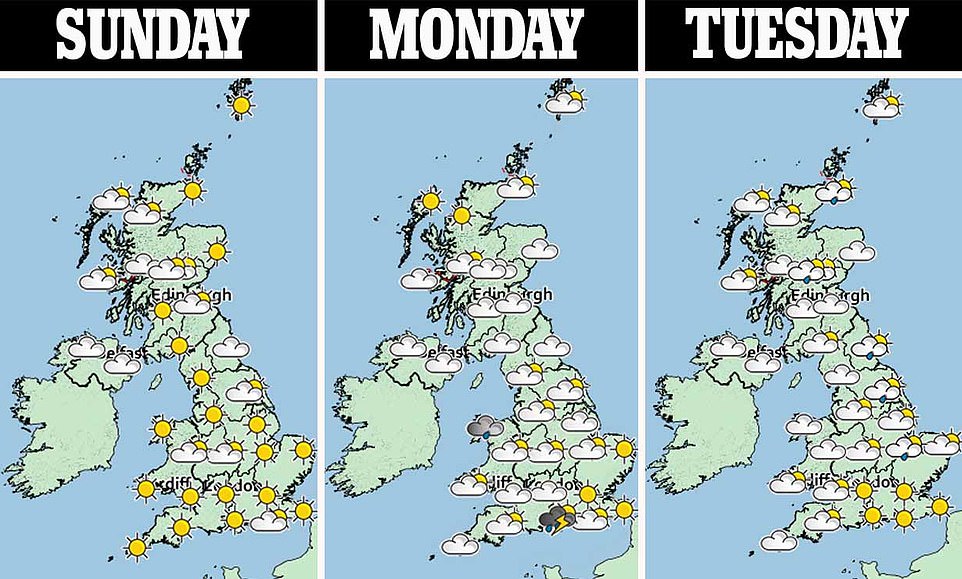 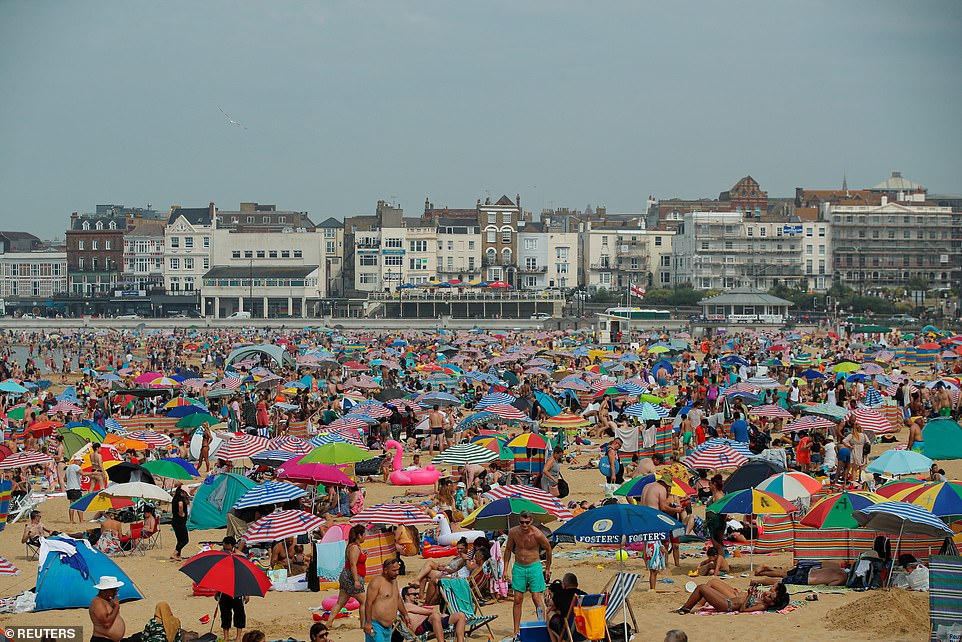 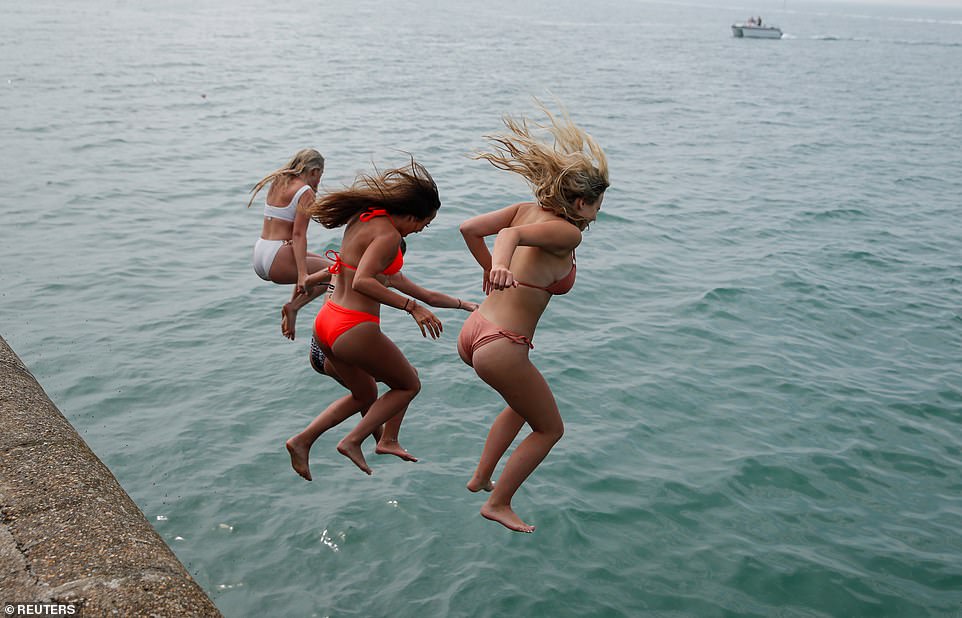 A group of girls jump into the sea as they enjoy the hot weather in Margate, Britain, on one of the hottest days of the year yesterday 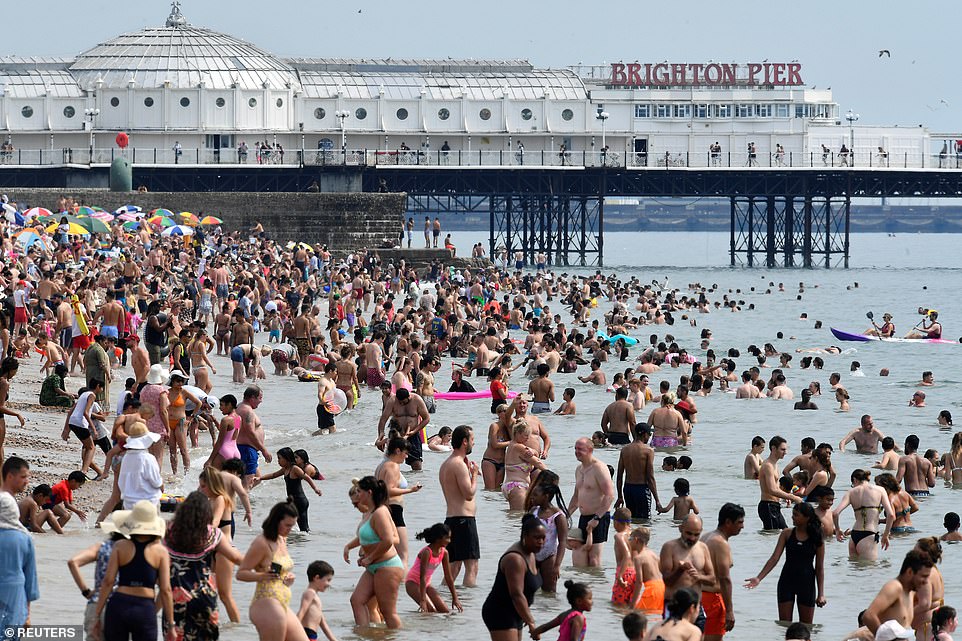 On Saturday a man in his 20s drowned in a water-filled quarry at Bawsey Pits near King’s Lynn, Norfolk, after ‘getting into trouble in the water’.

A swimmer has died after getting ‘into difficulty’ in a water-filled quarry as temperatures soared.

The man’s body was pulled from the water at Bawsey Pits near King’s Lynn in Norfolk on Saturday, police confirmed.

Emergency services were called to the scene at about 11.30am after the man was reported missing. 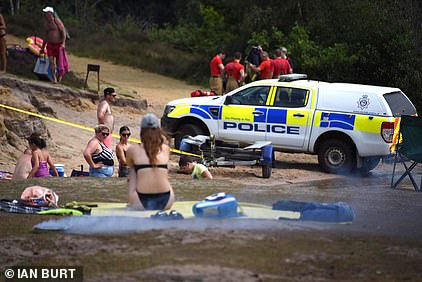 ‘The body of the man was recovered from the water and he was sadly pronounced dead at the scene. Our heartfelt condolences go out to his family at this time.’

Four crews of firefighters used two rigid inflatable boats and a drone to search for any sign of the swimmer after he got into difficulty in the water.

Norfolk Police confirmed they were called to ‘reports of a missing male who got into difficulty in the water.’

There have been frequent warnings about the dangers of swimming in the former quarry pits at Bawsey Country Park in recent years. 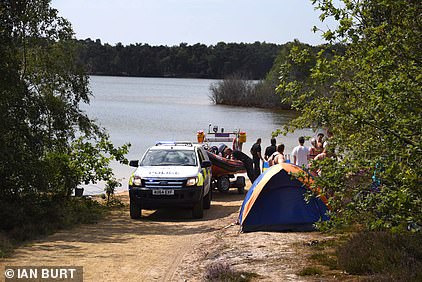 Emergency services were called to the scene at about 11.30am

Signs are in place warning swimming is banned.

A 16-year-old boy from east London drowned at the pits in July 2013. A local man Ryan Pettegell, 41, also drowned on the same day after he he swam out to look for the missing boy.

A Norfolk Police police spokesperson said today; ‘Colleagues from Norfolk Fire and Rescue Service have been assisting officers in the search and the incident is ongoing. 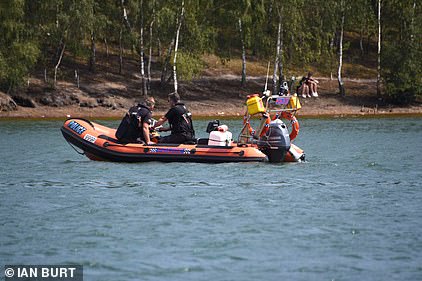 Emergency services were forced to search for the swimmer

‘No further details will be released at this stage and an update will be issued in due course.’

It comes as temperatures reached 95F at Frittenden in Kent early this afternoon.

Emergency services were called to the scene at about 11.30am when the man was reported missing.

Elsewhere, a hero builder rushed to save the life of a six-year-old boy who was found face down and unconscious in the water after he was swept out to sea on an inflatable swan at Black Rock Sands in North Wales.

The grandfather, who was on the beach with his family when he heard the child’s mother shout for help, patted the boy on the back before he threw up and started breathing again.

In Dorset, cliff divers leapt head-first into the sea from Durdle Door – where three men had to be rushed to hospital in May for jumping from a height into the water.

Record numbers packed the seafront on Friday, despite Government warnings, and with little signs of social distancing, on what was the UK’s hottest August day since 2003.

There were similar scenes again yesterday as staycationers in Bournemouth were seen emerging from tents they’d set up overnight to try and secure the best spots, while Sussex Police turned away cars from a full Camber Sands beach as early as 10am.

Similarly, drivers reported 40-minute queues for car parks in Sandbanks, which filled up throughout the day.

Thanet District Council in Kent warned that high tides at its beaches in Broadstairs and Margate make social distancing ‘difficult’, and asked visitors to ‘consider all the places you could visit’ along its 19 miles of coastline, ‘or come back when it’s quieter’.

Much like Friday, crowds appeared unbothered by fears of coronavirus as groups mixed without masks – despite rising cases in the UK driving fears of a second wave.

The chaos comes amid a plea for ‘bold’ young people to continue following social distancing rules as fears grow that they are catching the virus without knowing and passing it on to other members of their household.

Meanwhile, the Local Government Association is calling for councils to be given more powers to shut down rule-breaking pubs nationwide, with revellers expected to pack into venues up and down the country once again later today.

Dylan Bullard, a councillor from Pwllheli, North Wales, told the Telegraph the town was a scene of ‘bedlam’.

He added: ‘If you’re thinking of coming into town, please consider leaving it to later. The car parks are full and cars are parked illegally. Social distancing is impossible at the moment, and people are queuing to get into shops.’

London and the South East have endured sweltering heat over the past few days, with no let-up expected until the middle of next week.

The current record maximum temperature for the UK is 101.6F, reached in Cambridge Botanic Garden on July 25 last year.

By the afternoon, Bournemouth, Christchurch and Poole Council’s beach check app showed 19 of its 24 beaches under red alert, warning people to avoid the areas because safe social distancing was not possible.

The Met Office issued a level three heat-health warning for the South and South East, meaning the public should look out for others, particularly the elderly, children and people in poor health.

Ishani Kar-Purkayastha, consultant in public health at Public Health England, said: ‘This summer, many of us are spending more time at home due to Covid-19.

‘A lot of homes can overheat, so it’s important we continue to check on older people and those with underlying health conditions, particularly if they’re living alone and may be socially isolated.’

It came after Preston’s director of public health warned mixing in pubs was to blame for the area being put back into lockdown, with almost half of the area’s new cases reported were among people aged 30 and younger.

The city council’s chief executive Adrian Phillips pleaded with young people to continue following the guidance and not risk infecting others.

He told BBC Radio 4’s Today programme: ‘I know our director of public health has said ‘don’t kill granny’ to young people to try and focus the message.

‘Young people are inevitably among the brave and the bold, they want to be adventurous and out and about but we know that they have the virus, are more likely to at the moment, they often have less symptoms but they do take it back to their household and the community spread we are seeing we believe in many cases are young people taking it home and catching the virus.

‘We’re going to have to repeat it and whether Radio 4 is the correct channel for that I’m not quite sure but we’re using multiple channels and we’re working with community groups who are doing peer to peer comms around.