An eagle-eyed shopper has spotted a limited-edition Mars Bar in a corner shop in Victoria.

The woman noticed a rare ‘Mars Raspberry Smash’ flavour earlier this week in 7-Eleven Geelong North, and posted a photo of her discovery to Instagram food blog, Food Finds Geelong.

In the caption of the photo, she said the $2 bar contains a soft raspberry nougat sandwiched between caramel and classic Mars chocolate.

The woman rated the bar eight out of 10, but said the raspberry filling would taste better with white chocolate.

‘Finally a Mars limited-edition flavour that isn’t centered around another caramel or chocolate flavour!’ she wrote.

‘The color is great and the raspberry flavor is definitely there without dominating the caramel or chocolate.

‘But I tend to not love artificial raspberry flavour as it reminds me of medicine and I think it would have worked better with white chocolate, but really enjoyed this and I think other people will too. 8/10.’

The post, which has racked up more than 800 ‘likes’ since it was uploaded online on Wednesday, quickly drew delighted responses. 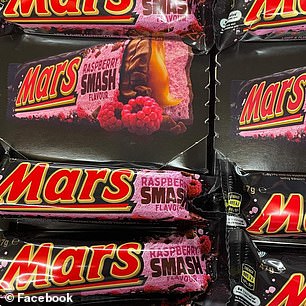 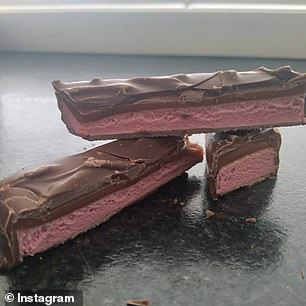 ‘So keen to try this,’ one woman replied.

‘YAAAS!’ said a second, while a third added: ‘OMG yum, going to find one of these tomorrow.’

Others begged the woman behind the food blog to stop sharing photos of new bars to try because they are derailing their diets.

‘Why oh why must you tempt me this way,’ said one.

Mars Raspberry Smash are available in Australia from leading supermarkets including Coles and Woolworths, select 7-Eleven stores and online from novelty confectionery website, The Grocery Geek.