Coronavirus has left no corner of the U.S. untouched, but counties with large minority populations are up to 150% more likely to have been hard-hit by infections compared to mostly white regions of the country, new data shows.

The virus spread like wildfire in communities of color, taking off fastest first in areas with large Asian or black communities, according to a Centers for Disease Control and Prevention (CDC).

Then cases spiked where there were large black and Hispanic populations, before become widespread in nearly every county in the US in December.

It’s become a painfully familiar story in the pandemic: the same racial disparities that underpin higher rates of other conditions like heart disease and diabetes have led to much higher infection and death rates in communities of color.

And CDC officials urge that states take the microscopic view their latest study has – looking at racial demographics in counties – to try to spot early warning signs that an outbreak is about to take off, especially in high-risk communities. 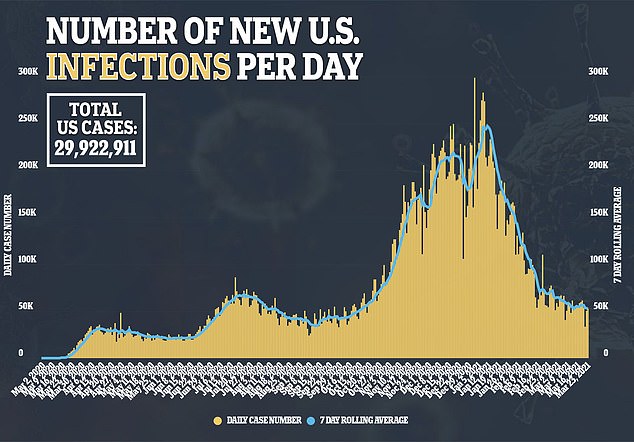 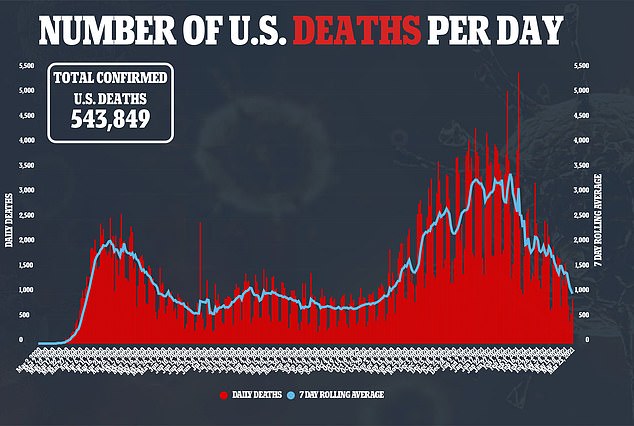 After nearly 30 million infections – and rising – more than 543,000 deaths and a year unlike any other, vaccines are finally beginning to quell the pandemic in the U.S.

But the toll has been enormous, especially for minority Americans.

Native American, black and Hispanic people are all more likely to catch coronavirus.

They are all about three times more likely to need hospitalization for the infection and about twice as likely to die of COVID-19 compared to their white peers.

And although daily cases have fallen precipitously from the January peak of more than 250,000 a day, the U.S. is still hovering around 50,000 infections every 24 hours.

And hotspots are still emerging and re-emerging, with cases rising in more than half of states, and particularly alarming spikes cropping up in places like Florida and Michigan, where restrictions to slow the spread of coronavirus have been relaxed. 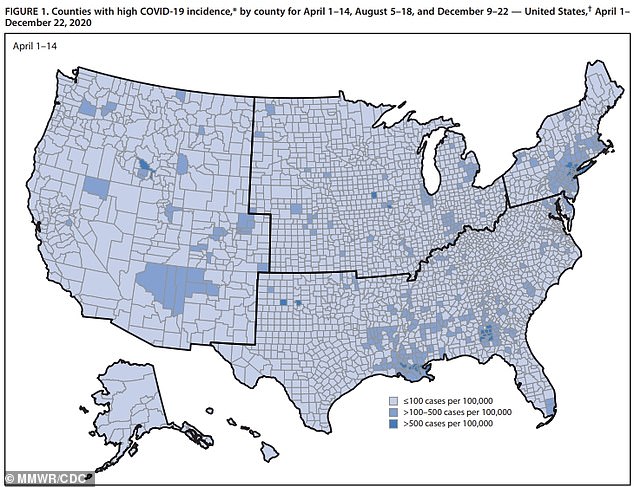 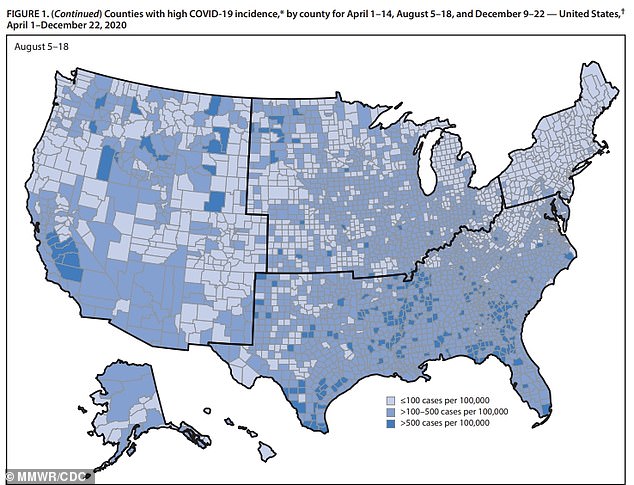 By August 5-18, the dynamic had shifted and case rates were high in about two-thirds of the country

Unfettered spread of coronavirus poses a particular threat to people of color, especially with high rates of poor access to vaccines and vaccine hesitancy among black and Hispanic Americans.

The impact of coronavirus has been uneven along racial lines from the first wave of infections in the U.S.

In other words, more than one in 10 counties had more than 100 new cases for every 100,000 residents in each two-week period the CDC examined.

During that same period, however, nearly 29 percent of counties with large Asian populations had already reached high levels of Covid cases.

The situation was equally dire in about 28 percent of black communities.

Rates of infection were highest in the tri-state area (where New York City had become the pandemic’s global epicenter), Louisiana, Arizona and New Mexico, Florida and Washington (where the first case in the nation was identified).

By August 5-18, the dynamic had shifted.

Case rates were high in about two-thirds of the country. 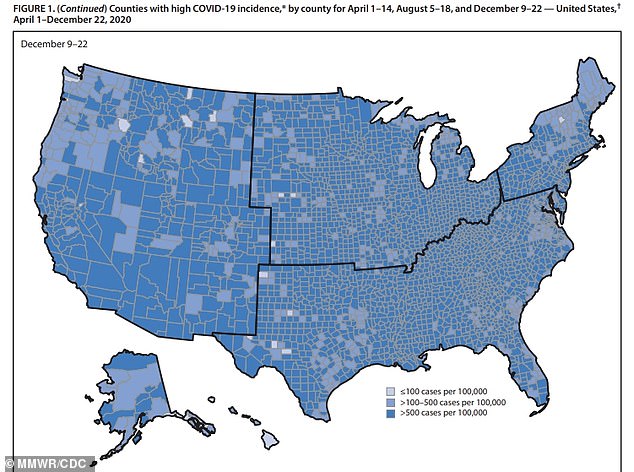 By December, disparities based on demographic composition of counties had more or less disappeared by the CDC study’s metrics – but only because coronavirus was so widespread in nearly every U.S. county (more than 99%)

But 92.4 percent of places with above average black populations were seeing numbers of weekly infections, as were 74.5 percent of counties with large Hispanic populations.

It’s worth noting that, by August, much of the office workforce was working from home, but many businesses were open.

Black and Hispanic Americans make up an outsized share of the ‘essential’ workforce and a large share of service economy obs, who by then were commuting to and from their workplaces and coming into contact with potentially infected people outside their households. 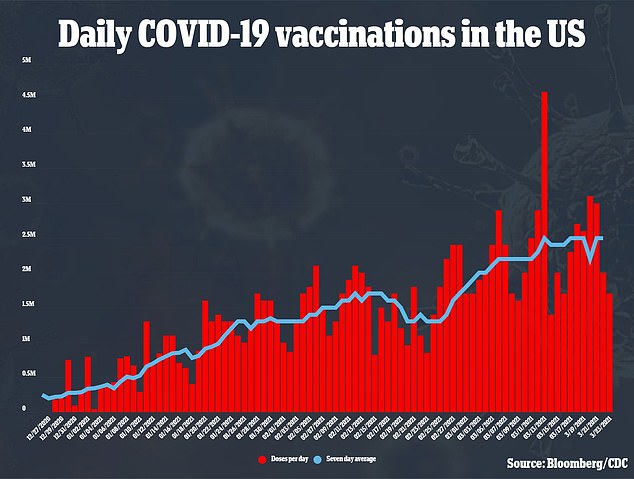 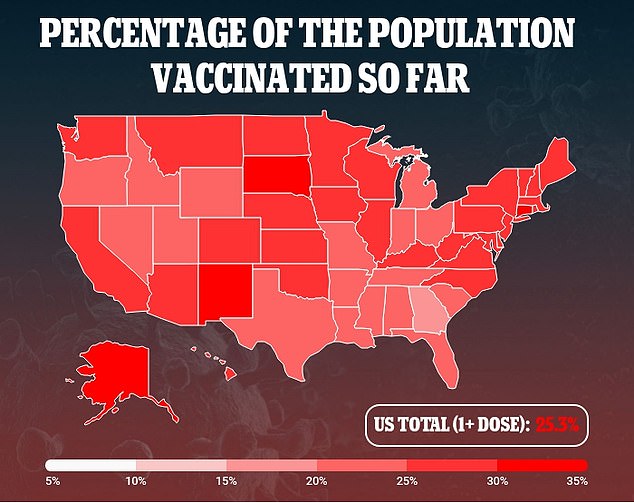 And of course, by December, the virus was spreading rapidly in more than 99 percent of U.S. counties, no matter what their demographic makeup.

Nonetheless, the ability of the virus to take hold quickly in communities of color earlier on in the pandemic undoubtedly fueled higher rates of infections, hospitalizations and deaths in these areas.

‘As SARS-CoV-2 has spread throughout the United States, racial and ethnic minority populations have been profoundly affected,’ the CDC authors wrote.

‘…Racial and ethnic minority groups were disproportionately represented among COVID-19 cases in counties with high or rapidly increasing incidence, and that these groups experienced higher COVID-19–associated hospitalization and death rates.

‘Inequities in social, economic, and environmental conditions among racial and ethnic minority groups lead to disparities in health risks and outcomes including those related to COVID-19.’

For Americans, the accelerating rollout of vaccines has flicked on a light at the end of the tunnel, but disparities remain.

And so long as there are still unvaccinated people, coronavirus will continue to spread – and the CDC authors warn that states might look to the counties where more vulnerable minorities live for signs of an oncoming surge.