Soon-to-be retired Dale Earnhardt Jr. finished in 34th place on Sunday in New Hampshire, but still made news by responding to president Donald Trump on Twitter

Dale Earnhardt Jr. broke with NASCAR’s ranks on Monday morning, Tweeting his support for peaceful demonstration after president Donald Trump spent the better part of the weekend condemning NFL players for protesting injustice in America by kneeling during the national anthem.

‘All Americans R granted rights 2 peaceful protests,’ read a Tweet by Earnhardt, who followed with a quote from the late President John F. Kennedy. ‘Those who make peaceful revolution impossible will make violent revolution inevitable-JFK.’

About 30 minutes earlier, Trump Tweeted his support for NASCAR, whose drivers did not protest by kneeling during the national anthem prior to the Sprint Cup race in New Hampshire on Sunday. ‘So proud of NASCAR and its supporters and fans,’ wrote Trump. ‘They won’t put up with disrespecting our Country or our Flag – they said it loud and clear!’

Trump added: ‘Many people booed the players who kneeled yesterday (which was a small percentage of total). These are fans who demand respect for our Flag!’

Earnhardt, now in his final season, represents the third generation of one of the sport’s most decorated families. His father, the late Dale Sr., won NASCAR’s top circuit seven times before dying in a crash in 2001 at Daytona. Earnhardt Jr., known as ‘Little ‘E,” has never won a points title but does have 26 career wins and remains among the sport’s biggest stars.

However, Earnhardt’s opinion seemed to be a rare one among stock car royalty.

Legendary NASCAR driver Richard Petty, who now serves as the majority owner of Richard Petty Motorsports, told reporters on Sunday that he wouldn’t tolerate any protests on his team.

‘Anybody that don’t stand up for the anthem oughta be out of the country. Period,’ Petty said, according to ESPN. ‘What got ’em where they’re at? The United States.’

Anybody that don’t stand up for the anthem oughta be out of the country. Period – Richard Petty

Petty went so far as to say he would fire anyone who protested, but Richard Petty Motorsports co-owner Andy Murstein told ESPN that he would not fire anyone on such grounds.

Petty wasn’t alone in this belief.

‘Get you a ride on a Greyhound bus when the national anthem is over,’ team owner Richard Childress said when asked by reporters on Sunday how he’d respond to any member of his team taking a knee, according to USA Today. ‘I told them anyone who works for me should respect the country we live in. So many people have gave their lives for it. This is America.’ 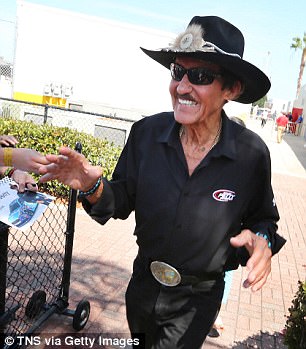 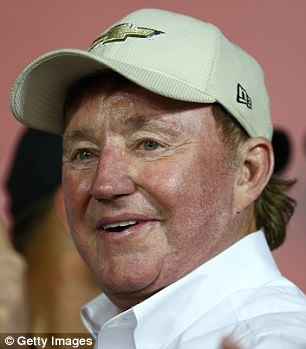 NFL players began kneeling during the national anthem during the 2016 preseason, when then-San Francisco 49ers quarterback Colin Kaepernick started the trend to protest against police violence against minorities.

Trump told an Alabama crowd Friday night; ‘Wouldn’t you love to see one of these N.F.L. owners, when somebody disrespects our flag, to say, “Get that son of a bitch off the field right now, out, he’s fired!”‘

HOW EACH NFL TEAM PROTESTED AGAINST TRUMP:

Pittsburgh Steelers: Stayed in their locker room until after the anthem.

New Orleans Saints: More than a dozen players sat during the anthem.

Denver Broncos: More than half the team knelt during the anthem

Buffalo Bills: A handful of players either sat or knelt.

Minnesota Vikings: The team locked arms during the anthem. While no Vikings were spotted taking a knee during the anthem, at least a dozen players sprinted into one end zone and took a knee with head bowed, before the crowd was asked to stand.

Green Bay Backers: Players linked arms as a team. Aaron Rodgers also posted a photo to Instagram of himself and three teammates taking a knee.

Chicago Bears: The Bears did not kneel but many did link arms.

Houston Texans: Players linked arms alongside each other.

Buffalo Bills: Several players knelt for the anthem, while others stood behind them with their hands on their shoulders.

Detroit Lions: Eight players took a knee in protest. The anthem singer took a knee after singing and raised his fist.

New York Giants: They linked arms but for the first time had players kneel during the anthem.

Seattle Seahawks: Whole team hose to stay in the locker room while the anthem was being performed

NFL owners such as John Mara of the New York Giants have said publicly that the issue has been divisive for NFL fans, players have continued protesting this season even with Kaepernick, a free agent, currently out of the league. 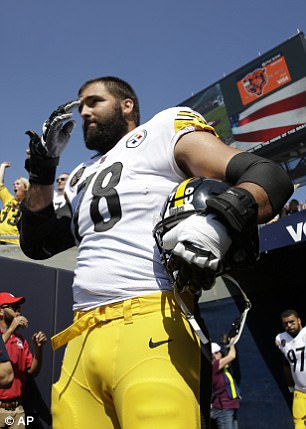 Offensive tackle Alejandro Villanueva, who served three tours in Afghanistan, was the only Steelers’ player to stand outside the tunnel for the national anthem on Sunday

In the wake of Trump’s speech, more than 200 players protested in some way on Sunday, with many kneeling, linking arms, giving black power salutes and some not even leaving the locker room for the anthem.

Players from both the Baltimore Ravens and Jacksonville Jaguars were the first to protest by taking a knee ahead of their game at Wembley Stadium in London on Sunday morning. No players were kneeling during the playing of God Save The Queen – the British national anthem.

At least 20 Patriots players were spotted kneeling as Tom Brady linked arms with his teammates, although some fans at Gillette Stadium could be heard yelling for players to ‘stand up.’