Earthquakes could be triggered by the cumulative mass of protons from the sun, according to study

Earthquakes could be triggered by streams of positively charged ions ejected by explosions on the surface of the sun, according to a new study

Earthquakes are notoriously hard to predict, but a new study suggests they could be tied to explosions on the surface of the sun.

A team of researchers at the National Institute of Geophysics and Volcanology in Rome investigated the connection between coronal mass ejections – large release of plasma and other particles that often follow solar flares – and the frequency of earthquakes.

They found that within 24 hours of major explosions on the surface of the sun, there was a substantial increase in the number of earthquakes around the world that measured at least 5.6 on the Richter scale.

Researchers in Rome found a strong correlation between solar eruptions and new waves of earthquakes of at least a magnitude 5.6 on Earth

For the study, the team analyzed data from the Solar and Heliospheric Observatory (SOHO) satellite, a joint project from NASA and the European Space Agency, which orbits the sun and records data about coronal mass ejections, including the time and magnitude of each.

The team compared the SOHO data against 20 years of earthquake data from Earth and found that whenever positively charged ion streams from the sun were at peak strength, there would be a substantial increase in the number of earthquakes starting around 24 hours later.

To explain the connection, the team pointed to the piezoelectric effect, the well-documented phenomenon of quartz releasing electrical pulses when some external force causes it to compress. 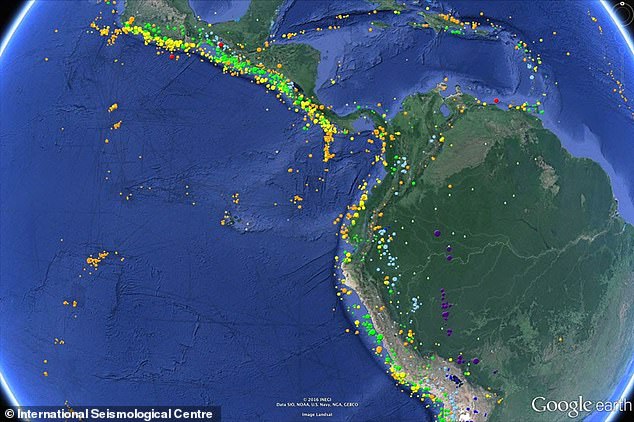 Quartz makes up around 20% of the Earth’s crust and the team suggested that the large streams of positively charged ions from the sun creates electromagnetic disturbances when they enter Earth’s atmosphere, which in turn causes quarts in the Earth’s crust to compress.

The quarts then begins releasing electrical pulses that may agitate certain tectonic plates and faults, which causes new earthquakes.

This could also explain the well-documented phenomenon of radio wave disruptions and earthquake lighting – strange flashes of light in the sky that coincide with quakes even with no other storm activity.

Past research suggested these electromagnetic events might be triggered by the earthquakes themselves, but the latest findings suggest they may actually be part of the same broader phenomenon that first sets the earthquake in motion.

The team admits their findings so far have only established a correlation between solar eruptions and earthquakes and further study is required to firmly establish causality.