Earth’s outer atmosphere stretches beyond the MOON, according to study on decades-old observations

Earth’s atmosphere stretches beyond the MOON: Study on observations made in the 1990s reveals outer limits extend farther than expected, in breakthrough that could help us find watery exoplanets

A distant cloud of hydrogen atoms that makes up the outermost part of Earth’s atmosphere extends far enough to envelope the moon, too.

This is according to a new study on observations made more than 20 years ago by the ESA/NASA Solar and Heliospheric Observatory, which found that this region known as the geocorona stretches up to 391,464 miles (630,000 kilometers) away.

Scientists say the new understanding could help guide our search for watery planets outside of our solar system.

Astronauts first captured an image of the geocorona in 1972 during the Apollo 16 mission. It’s pictured above, as seen from the moon. Scientists now say this region stretches up to 391,464 miles (630,000 kilometers) away

The geocorona is the outermost part of Earth’s atmosphere.

It consists of hydrogen atoms that extend to the point at which our atmosphere merges with outer space, according to ESA.

New calculations have revealed that the geocorona stretches up to 391,464 miles (630,000 kilometers) away.

This means it extends far enough for the moon to pass through it, too; in fact, scientists now estimate it stretches to nearly double the distance to the moon.

‘We were not aware of it until we dusted off observations made over two decades ago by the SOHO spacecraft.’

The observations were made by the SWAN instrument on the SOHO craft, which traced hydrogen signatures throughout the geocorona.

And, this revealed it extends nearly double the distance to the moon.

As the presence of hydrogen in a planet’s outer atmosphere is often a sign of water vapor down near the surface, the researchers say the new insight could help in the search for potentially habitable exoplanets.

‘This is especially interesting when looking for planets with potential reservoirs of water beyond our solar system,’ said Jean-Loup Bertaux, co-author and former principal investigator of SWAN.

Astronauts first captured an image of the geocorona in 1972 during the Apollo 16 mission.

‘At that time, the astronauts on the lunar surface did not know that they were actually embedded in the outskirts of the geocorona,’ Bertaux said.

According to the new study, the hydrogen atoms in the geocorona differ in density on Earth’s dayside and night side as a result of sunlight. 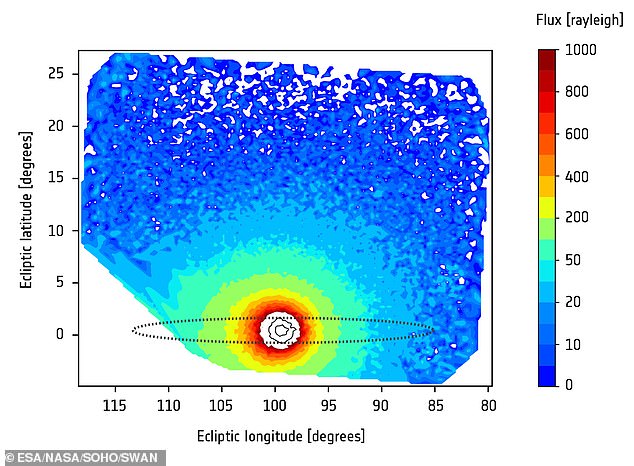 The observations were made by the SWAN instrument on the SOHO craft, which traced hydrogen signatures throughout the geocorona. SOHO’s observation is shown above 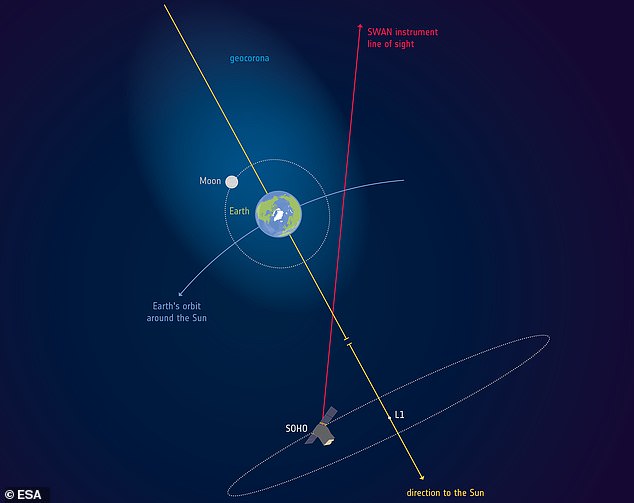 The observations revealed Earth’s geocorona extends nearly double the distance to the moon, as illustrated in the graphic above

On the dayside, the atoms are compressed to about 70 atoms per cubic centimeter, at 60,000 km above the surface.

As far out as the moon, this drops to just .2 atoms.

‘On Earth we would call it a vacuum, so this extra source of hydrogen is not significant enough to facilitate space exploration,’ Baliukin said. 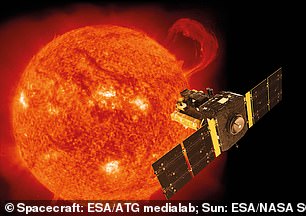 ‘There is also ultraviolet radiation associated to the geocorona, as the hydrogen atoms scatter sunlight in all directions, but the impact on astronauts in lunar orbit would be negligible compared to the main source of radiation – the sun,’ said Bertaux.

But, the team notes, this could pose challenges for future space observations.

According to Baliukin, ‘Space telescopes observing the sky in ultraviolet wavelengths to study the chemical composition of stars and galaxies would need to take this into account.’