East Africa struggles with heavy rains, with more to come

By Ryan Fahey For Mailonline and Associated Press

Thousands are now at risk of water-borne diseases after two years worth of rain fell in a single day in the the small but strategic East African nation of Djibouti.

Several regional countries including Kenya are struggling after such downpours, with more to come.

Rainfall from October to mid-November has been up to 300 per cent above average in the greater Horn of Africa region, according to the Famine Early Warning Systems Network.

Passengers from stranded vehicles stand next to the debris from floodwaters, on the road from Kapenguria, in West Pokot county, in western Kenya on Saturday

On Thursday, a joint Djibouti-U.N. statement said up to a quarter of a million people have been affected in recent days in the country on the Red Sea that´s home to military bases for the United States, China and others. With heavy rains forecast through the end of the month that number could grow.

Djibouti has been called one of the world’s most vulnerable non-island nations in the face of climate change as sea levels rise. Neighboring Somalia has been hit hard by recent flooding as well.

In Kenya, East Africa’s economic hub, the government said 120 people have been killed in flooding and mudslides during an unusually severe rainy season. More than 60 died over the weekend in West Pokot county.

More than 18,000 people across Kenya are displaced, according to the Kenya Red Cross Society. Infrastructure has been damaged, making aid delivery more difficult.

Doctors are worried that diseases, especially waterborne ones, might spread.

‘We have health issues, and is it wounds, is it children who are coming up with pneumonia, is it diarrheal illnesses,’ said Dr Taabu Simiu at the West Pokot County Referral Hospital.

Some survivors are struggling.

‘Life here is terrible because we don´t have money, because if someone had their money in the house it was all swept away by the floods,’ one survivor, Cherish Limansin, said. 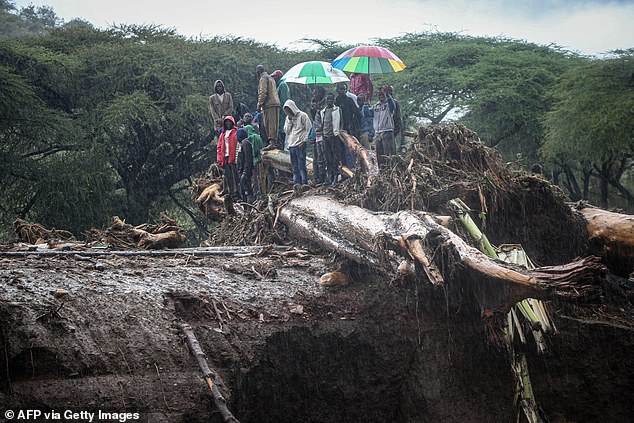 People stand on debris blocking a highway on a bridge after River Muruny burst its bank following heavy rains in Parua village, about 50 miles northeast of Kitale, in West Pokot county, western Kenya on Sunday

‘It’s only poverty staring at us here. We wake up with nothing. If it wasn’t for the little help we get we would have nothing and so far today we have eaten nothing.’

One local official expressed frustration over relief efforts, asserting that the national government’s response to the disaster has been slow and insufficient. The official spoke on condition of anonymity as he was not authorized to speak to the media.

Two villages with almost 5,000 residents in all remain cut off from the rest of the world several days after the flooding, said West Pokot county disaster management official Monicah Kalinyong´ar.

Governor John Lonyang’apuo said people lacked food because of the slow pace of assistance, saying a helicopter should be operating full time for the duration of the relief efforts.