The actress, 48, has been secretly dating the soap star after they grew close while working on the 2019 stage adaptation of The Girl On The Train.

It comes after Samantha revealed she had secretly split from her husband Mark in 2018 after nine years of marriage, and it’s reported her estranged spouse has given her new relationship his seal of approval.

A source told The Sun: ‘They couldn’t be happier and have loved dating away from the public eye.

‘They’ve met each other’s families and it all feels very natural. They’re totally smitten with each other.

‘Plus her ex Mark is happy for her too. It’s all very grown-up and modern.’

MailOnline has contacted representatives for Samantha Womack and Oliver Farnworth for comment. 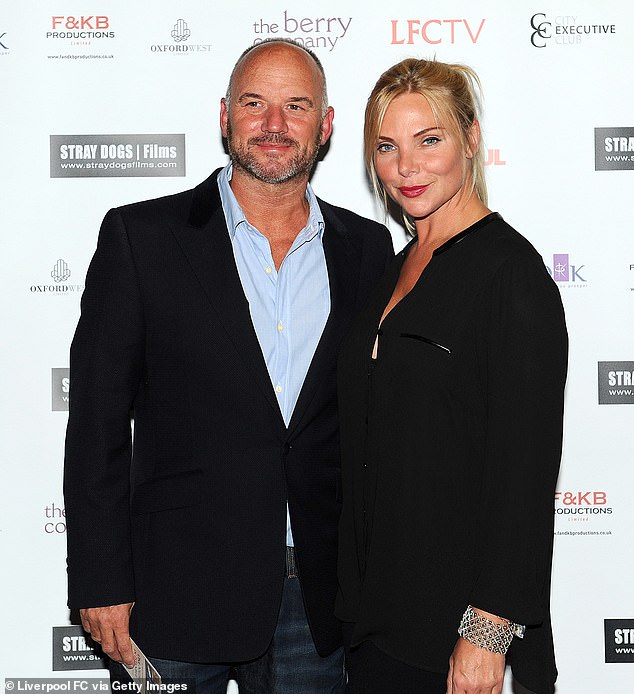 Break up: It comes after Samantha revealed she had secretly split from her husband Mark in 2018 after nine years of marriag (pictured in 2014)

It comes after Samantha revealed she secretly split from her husband Mark in 2018 after nine years of marriage.

The Soap star confirmed the couple have been separated for a while but are cohabiting ‘happily’ with their children Benjamin, 19, and Lili Rose, 15, at their Bedfordshire farmhouse.

The thespian, who is also stepmum to Mark’s son Michael, 25, from a previous relationship, insisted they’re amicable and are in ‘no rush’ to change their unconventional living situation.

‘But now feels like the right time to be honest and admit we’re no longer together. It would be naive to say that moving on has been easy for us both. It’s not an easy route but we’ve always been honest with each other about everything.’

The TV star, who met the Emmerdale actor, 59, on the set of Liverpool 1 back in 1998 and tied the knot in May 2009, admitted she wants to be ‘best friends’ with her ex’s future partners as they’ve started to see other people since their break-up and even give each other dating advice. 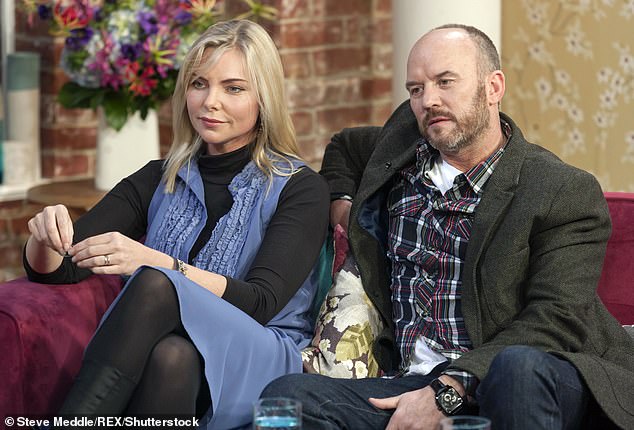 Close: The soap star, 47, confirmed the couple have been separated for a while but are ‘cohabiting happily’ with their children at their Bedfordshire farmhouse (pictured in 2013)

Samantha and Mark started their romance soon after their respective marriages ended.

The blonde called it quits from Junfan Mantovani in 1998 after just one year of marriage, while the Liverpool native was married to Mary Therese McGoldrick from 1995 until 1997. 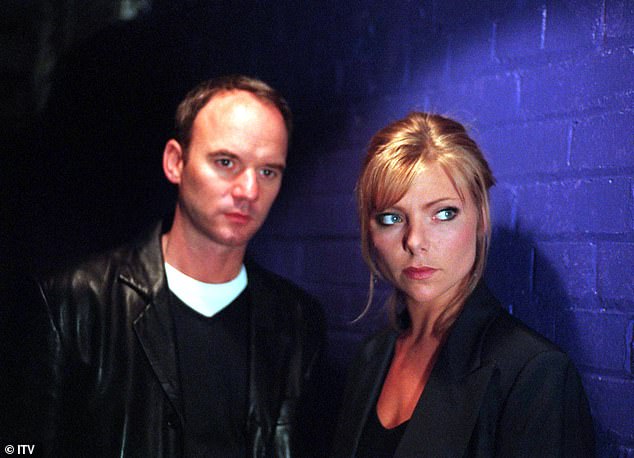 Samantha revealed talks of a split started ‘about four years ago’ as her husband wanted to lead a ‘quiet life’ while she is ‘more out there’.

Despite being separated for quite some time, the theatre star insisted they’ve had ‘some of their best times together’ as a family during the coronavirus lockdown.

The mother-of-two candidly confessed she feared she and Mark ‘failed’ as a couple, but is content their son and daughter are ‘happy that we’re happy’ as they’re ‘soulmates’ and ‘still love each other’.

Earlier this year, Murphy’s Law star Mark appeared on Lorraine Kelly to discuss his new stint on Emmerdale, but kept mum on his split from Samantha. 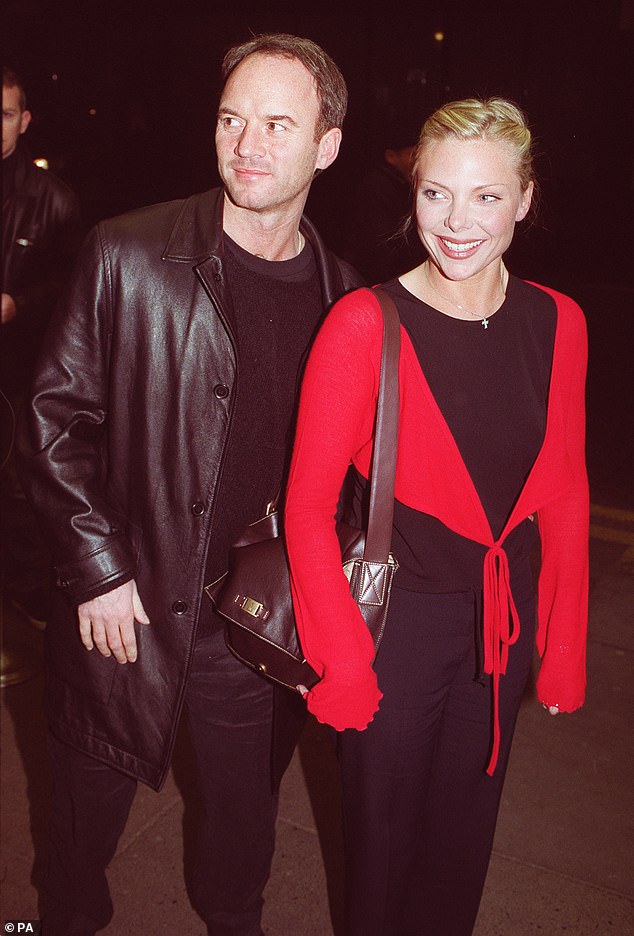 ‘We’re soulmates’: Samantha and Mark have taken things slow when it comes to divorcing legally, and are even considering getting a house abroad (pictured in 2000) 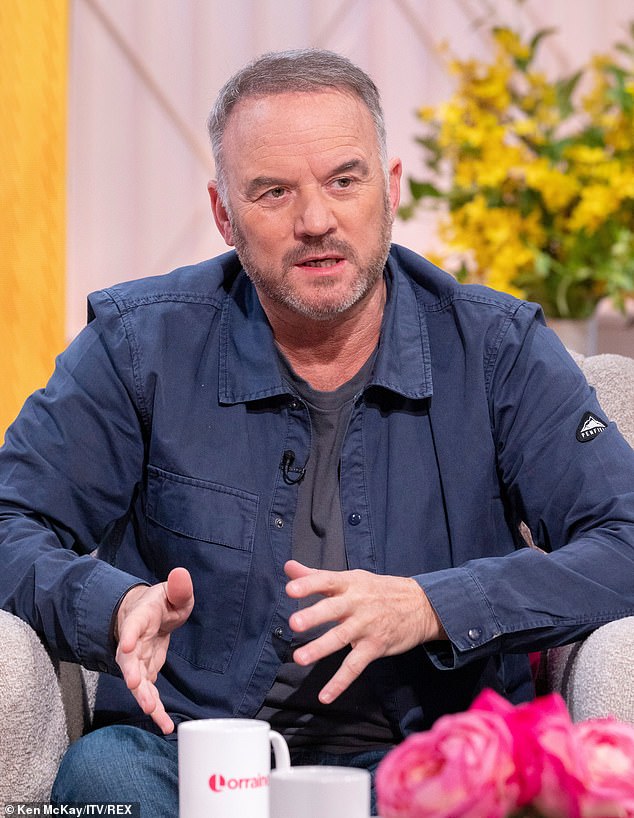 ‘We wanted to find the right time’: In March, the Murphy’s Law star appeared on Lorraine to discuss his new stint on Emmerdale, but kept mum on his split from Samantha (pictured) 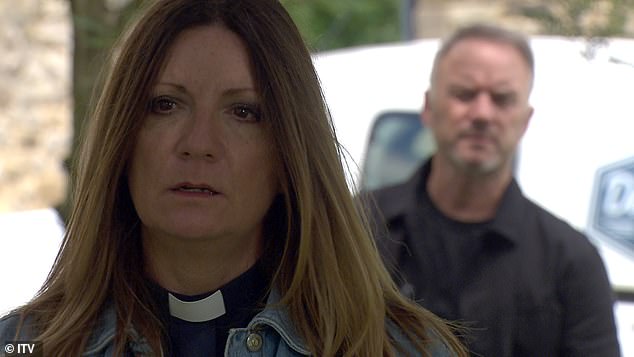 The Brighton-born star said that they had sat down with their kids to decide when was the right time to announce the news publicly, with friends and family already being aware of the breakdown of their marriage.

Samantha and Mark have taken things slow when it comes to divorcing legally, and are even considering getting a house abroad and having two places to live.

The couple, who haven’t been living together for two years, have decided to officially divorce, the Daily Star reports. 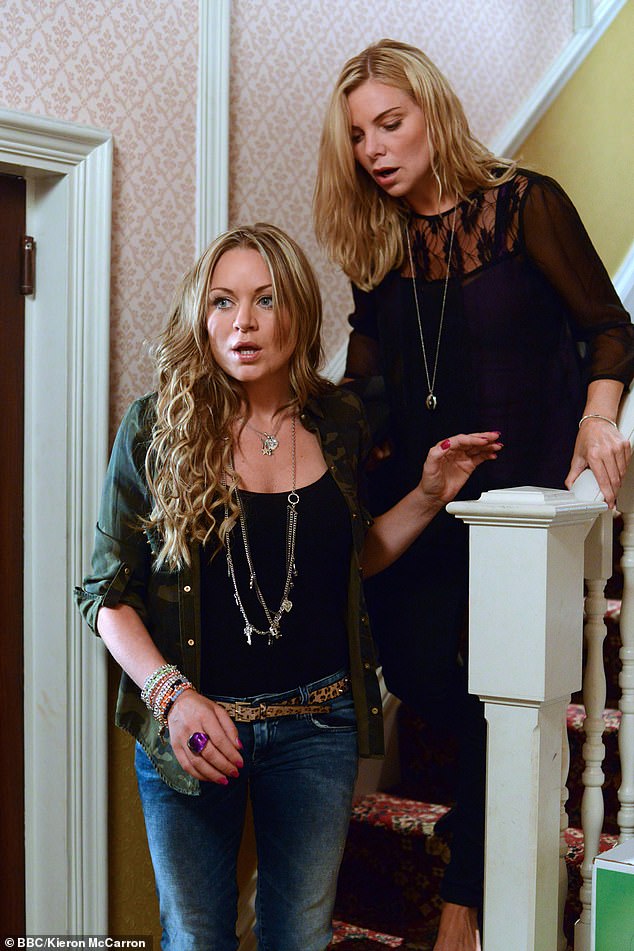 Helping hand: The blonde said her former on-screen sister Rita Simons has been supporting the couple (they played Ronnie and Roxy Mitchell on EastEnders, pictured in 2013) 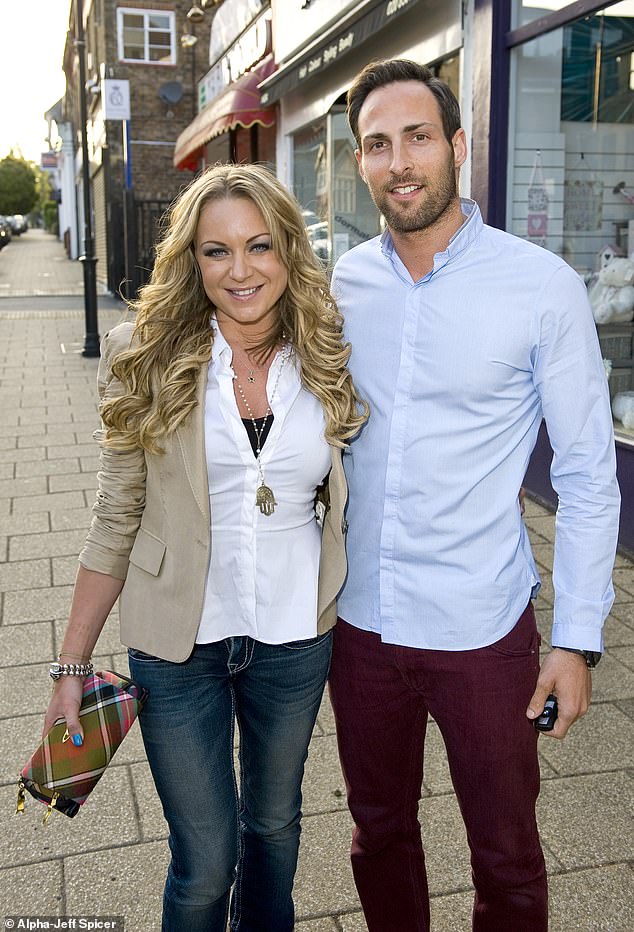 The 43-year-old’s representative confirmed the divorce proceedings to the publication on Friday and suggested that she is doing well, despite the unfortunate news.

They said: ‘Rita and Theo have been separated for almost two years and Theo moved out of the family home some time ago.

The insider added: ‘The split has been a big change for Rita, but she knows it’s the right decision. 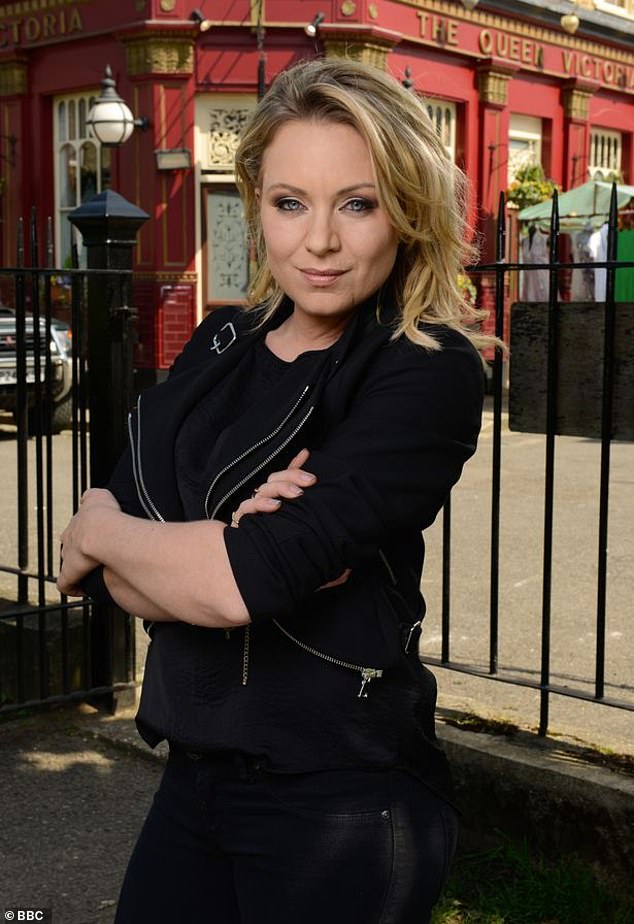 It’s over: The agent of the 43-year-old confirmed the couple have separated after they began ‘growing apart’ and they actually haven’t lived together for two years

Rita shares twin daughters, Jamiee and Maiya, 14, with her hairdresser husband who she tied the knot with in 2006 after apparently meeting through a mutual friend when they were just 19.

Theo runs the award-winning, Kink hair salon in London, and he reportedly moved out of their family home in Elstree, Hertfordshire in 2018.

Another source claimed that the I’m A Celeb star is sure she has made the right decision and intends on putting their family home up for sale. 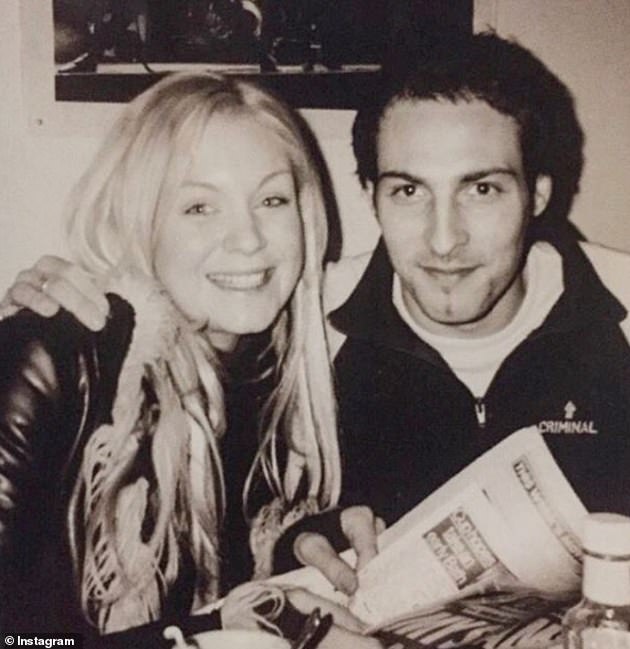 Moving on: The couple allegedly met through a mutual friend at the age of 19 and despite the split they remain amicable and plan to co-parent their twin daughters, Jamiee and Maiya, 14,

According to the source, she is looking forward to a fresh start and a future full of new possibilities.

In May, Rita cryptically implied she had been in a bad place as she wrote on Instagram: ‘I’ve been to dark places in the last few years.’

She divulged that she was battling problems in her personal life and admitted that she has finally found ‘healing’ and ‘peace’. 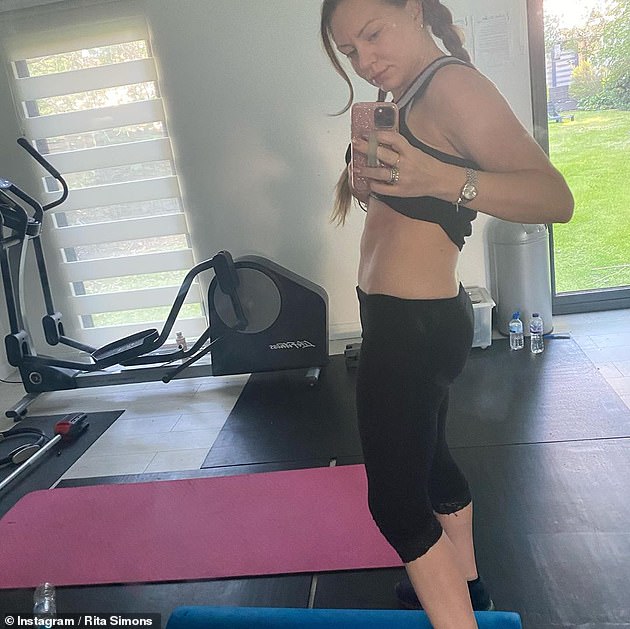 Dedication: Back in May, the I’m A Celeb star showed off her jaw-dropping physique as she credited working out during lockdown with helping her ‘heal’ from personal problems

Rita credited working out during lockdown with helping her ‘heal’ from personal problems.

She wrote: ‘I haven’t been too vocal on social media during lockdown..not about my own life anyway But I wanted to share this with you…before lockdown I was 100% a workaholic and 1000% stressed out.

‘I was trying to deal with work and personal problems at the same time. I’ve been to some pretty dark places in the last few years both mentally and physically but I don’t tend to shout about it. (Apart from the insomnia!) 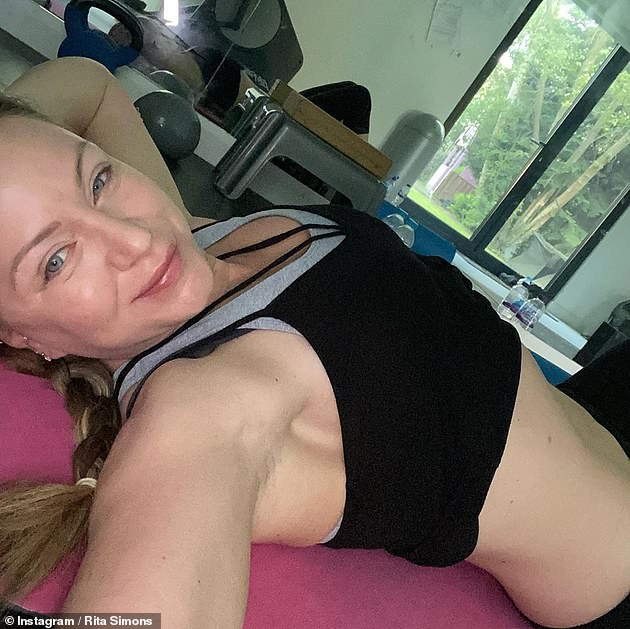 Sensational: Rita displayed her washboard abs in a vest top and leggings as she hailed the benefits of exercise for lifting her out of a ‘dark’ mental space 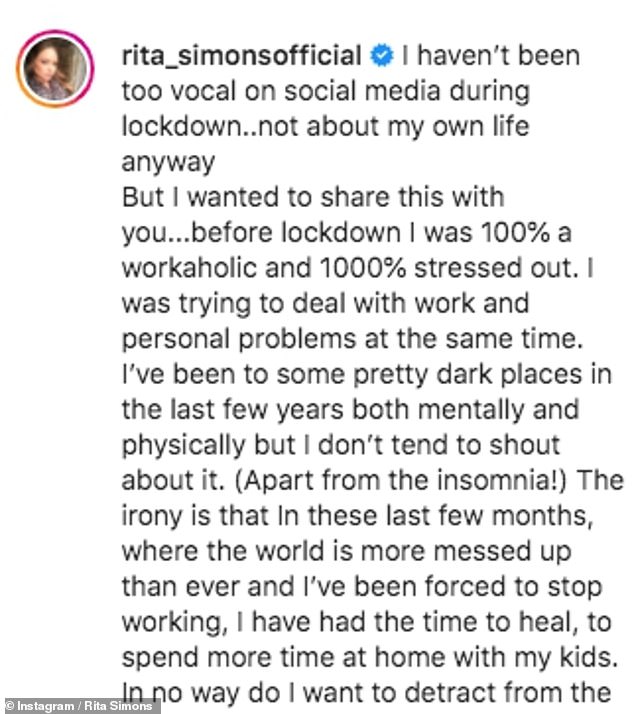 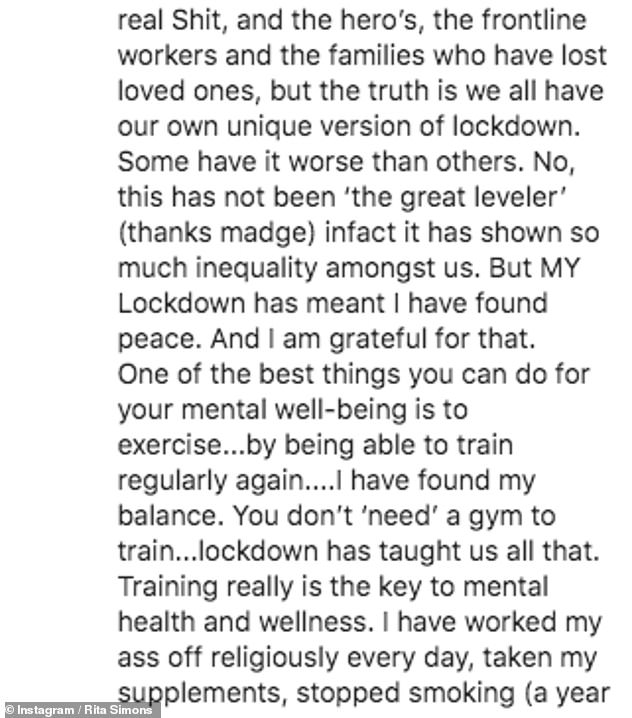 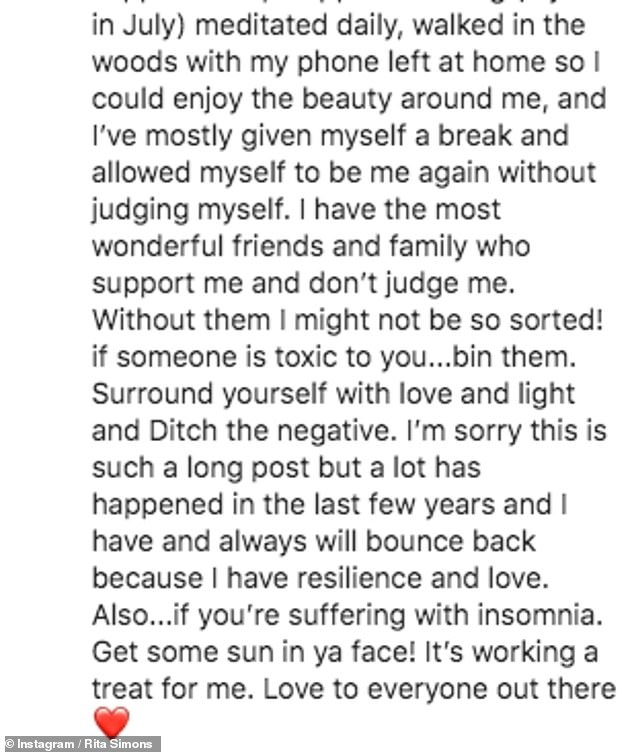 Honest: The lengthy Instagram caption detailed her struggles with her mental health during lockdown and previously

‘Irony is that in these last few months, where the world is more messed up than ever and I’ve been forced to stop working, I have had the time to heal, to spend more time at home with my kids.

‘In no way do I want to detract from the real s**t, and the hero’s, the frontline workers and the families who have lost loved ones, but the truth is we all have our own unique version of lockdown.

‘Some have it worse than others. No, this has not been ‘the great leveler’ (thanks madge) infact it has shown so much inequality amongst us. But MY Lockdown has meant I have found peace. And I am grateful for that.’