In a week when DIY SOS presenter Nick Knowles came out as a guitar-troubling troubadour, Shane Richie – ‘TV’s Alfie Moon!’ – has gone one better and made a decent fist of a modern country album.

And, in the grand ole cowboy-booted tradition, the collection of covers and self-written compositions contains the obligatory heartbroken, boozy ballad.

‘I lost my first wife through my drinking,’ he confesses, referring to his nine-year marriage to Nolan sister and Loose Women fixture Coleen, with whom he had two children. ‘A bottle of Jack [Daniel’s] and I was off.’

The TV entertainer and EastEnders star Shane Richie looks back on his Jack-fuelled, womanising days with a mixture of guilt and bewilderment

Richie, 53, has addressed his demons in The Bottle’s Not Your Friend, which looks down the road where boozing ‘shifts from temporary solution to problem’.

‘It was tough to write,’ he frowns. ‘It’s pretty personal. “It won’t keep you warm and it won’t have your back in a fight.” That’s what it is about.’

The TV entertainer and EastEnders star looks back on his Jack-fuelled, womanising days with a mixture of guilt and bewilderment. He runs a hand through his freshly dyed hair as he reluctantly recalls his wilder times.

‘By 1996 my ego had taken over,’ he admits. ‘I was getting a police escort to nightclubs. I’d be thinking, I’m 30, I’ve got bad skin but all these girls are screaming for me outside. It went to my head and I was a bit out of control. I’d just had a Daz ad where they paid me a load of money and I thought I was sorted for life, that it was going to last for ever. I believed the hype and I do regret that now.

‘I was lying to myself about the drinking and the women, thinking I was pulling the wool over the public’s eyes. I’d be on TV advocating monogamy [couples competed to tie the knot live on his Love Me Do in the late Nineties] while I was having an affair, for God’s sake.’

Richie has five children – Shane Jr, 28, Jake, 24, Mackenzie Blue, 11, Lolita Bell, nine, and Romany-Skye Angel Shelley, six. ‘There’s a big old gap there,’ he notes. Since 2007, he has been married to Christie Goddard, 15 years his junior. A casual comment to her slightly insecure, and occasionally wayward husband, inspired a lyric on A Country Soul. 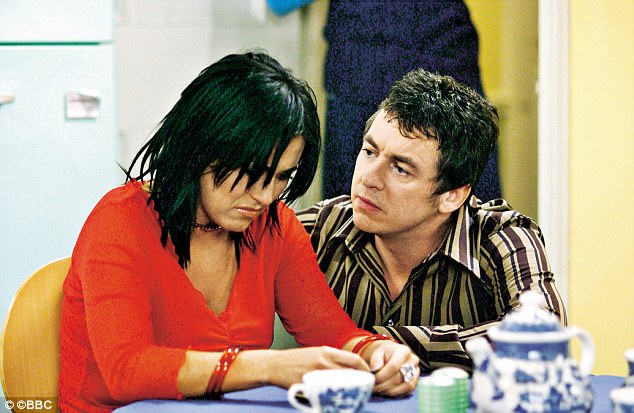 Richie as Alfie with Kat (Jessie Wallace) in EastEnders

‘I’d put on a bit of weight, eating late at night when I was filming Benidorm,’ Richie acknowledges. ‘She mentioned it and I got a bit sensitive and said, “What? Don’t you fancy me any more?”

Richie completed the composition, Shut Up (‘Cause All I Want Is You), with the help of his musician son Jake Roche, whose band Rixton share a manager, Scooter Braun, with Justin Bieber.

Jake’s facility with superstardom comes from his father’s ease in celebrity company. ‘I’ve met them all,’ Richie croons. ‘And they’re all just human beings.’

Richie was raised in a women’s refuge in north-west London, but recently revisited his family’s homeland for the filming of Kat & Alfie: Redwater, the noir-ish drama centred around EastEnders’ star-crossed couple.

This reacquaintance with his roots partially inspired Richie to retool Nik Kershaw’s I Won’t Let The Sun Go Down On Me as a hoe-down stomper. ‘It’s got a real Pogues feel to it,’ he enthuses. 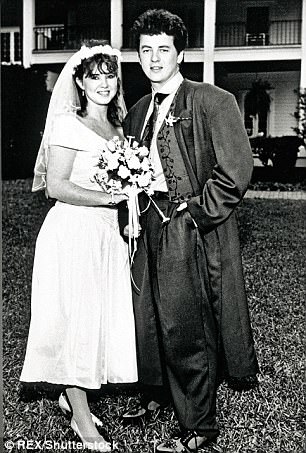 Richie with Coleen Nolan at their wedding in Orlando, 1990

The voice on A Country Soul has gravel and gravitas and the song choice is sound, cannily cherry-picking the best of the current crop of country artists, from Rascal Flatts to Darius Rucker.

Despite leaning towards Americana these days, Richie remains a fan of British music and TV, although some shows give him the willies.

‘Have you seen Naked Attraction?’ he splutters. ‘It’s Blind Date with your ***k out. What Cilla would’ve made of it, I don’t know but that’s what you’re up against now, so to speak.’

Richie recognises that presenting his new project to the public may prove problematic.

‘I know people will say “What’s a soap star doing singing country songs?” And so they should. I know I would.’

He also has few illusions about being ‘cool’.

‘I don’t know if I’ve ever been cool,’ he shrugs. ‘Although my kids thought I was really cool when I first became Alfie Moon and that was good enough for me.’ He grins, remembering another great country song. ‘Good enough for me and Bobby McGee.’

‘A Country Soul’ is out on November 10 on East West