EastEnders star Katie Jarvis has been ‘glassed by a drunken Irish man’ on a night out in London.

The star, who plays Hayley Slater on the hit soap had been treated by medical staff after the attack last Friday night in east London.

It is said that she had been out in Romford when she was set about on. She tweeted her thanks to the police service for ‘looking after’ her.

She said: ‘Big thank you to the Met police tonight and ambulance service for looking after me after I was glassed by a drunken Irish man for f*** all.’ However, she later deleted the tweet after fans spotted it and enquired after her wellbeing.

Katie Jarvis in character on Eastenders

She later posted: ‘Thanks lovely lot I’m good as gold.’ She then thanked fans and sent out a tweet to ‘put minds at rest’.

She said: ‘Ok to put people’s minds, and questions to rest. I am absolutely fine thank you so much for all your concern and checking in on me but i’m a soldier and been through a hell of alot worse.

‘Now you can start focusing your concerns on some real news.

‘Love you all xx’

According to The Mirror her agent refused to discuss the incident.

She said: ‘I have no comment to make to any newspaper onany subject to do with anything. Whatever it is I don’t want to hear.’

The 27-year-old joined the Eastenders cast in 2018 as the cousin of Kat Moon.

One of the story lines she had been involved in was a fling that her and Alfie Moon had while they lived in Spain with Kat and their children. 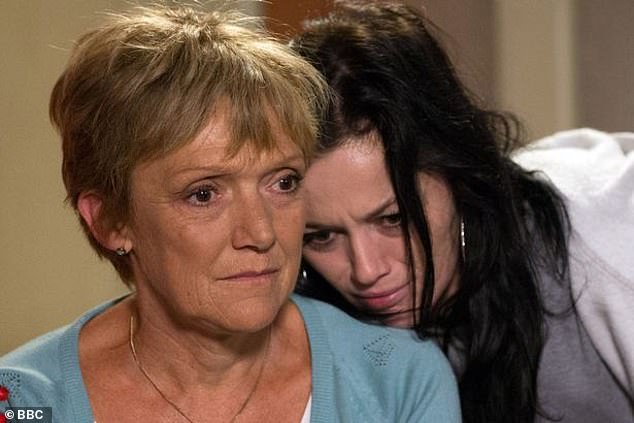 Dramatic scenes aired over Christmas revealed the extent of Hayley and Alfie’s betrayal, leading to a shocking showdown between them and Kat.

She was last on screen last month in scenes which showed her receiving ongoing mental health treatment.

The troubled young mum had discharged herself and taken off, however, BBC bosses are said to be keeping the door open for her return.

Katie found fame in Hollywood before winning a part in the BBC soap.

Her breakthrough film had been 2009’s Fish Tank.