‘I was begging for my life!’ EastEnders star Molly Conlin ‘held at KNIFEPOINT in terrifying home raid as four men break in while she’s alone in the house’

EastEnders star Molly Conlin has revealed she was ‘held at KNIFEPOINT’ in a terrifying home raid.

The actress, 19, who played Dotty Cotton in the soap between 2008 to 2010, took to Twitter on Saturday evening, where she detailed the harrowing ordeal which had taken place that afternoon, in a thread of tweets.

Molly explained how she’d been alone in the house in Witham, Essex during the ordeal, during which she claims four men broke in and eventually got away with a car, phone and watch.

SHOCKING! EastEnders star Molly Conlin, 19, has revealed she was ‘held at KNIFEPOINT’ in a terrifying home raid on Saturday

She wrote: ‘So I didn’t know whether to write a post or not but my mum’s saying it’s the best thing to do as you never know if it’s going to happen to you.

‘At 3 o’clock today I was in my house when I got a knock on the door, I opened it thinking it was the delivery man.’

‘2 tall black men barged in, pushed me to the ground, dragged me upstairs and held me at knife point while raiding my house.

‘I was literally praying as I thought I was going to die. 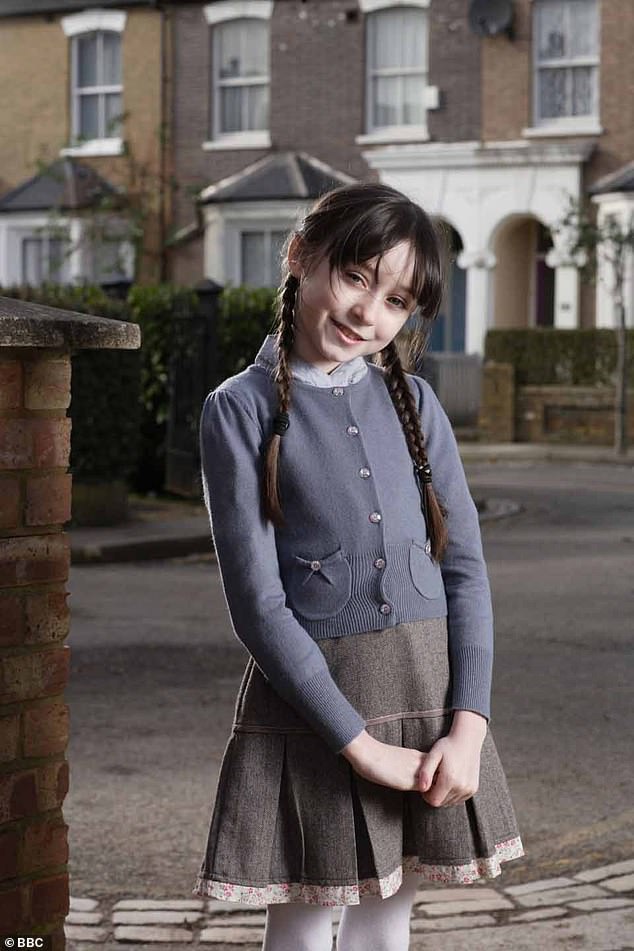 What happened? Molly took to Twitter on Saturday, where she detailed her harrowing ordeal in a thread of tweets 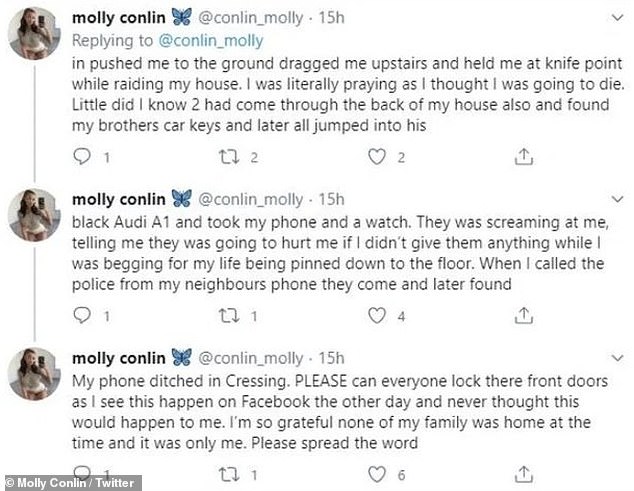 Detailed: Molly explained how she’d been alone in the house in Witham, Essex and claimed that four men broke in and eventually got away with a car, phone and watch

‘Little did I know 2 had come through the back of my house also and found my brothers car keys and later all jumped into his black Audi A1 and took my phone and a watch.

‘They were screaming at me, telling me they was going to hurt me if I didn’t give them anything while I was begging for my life being pinned down to the floor.

‘PLEASE can everyone lock their front doors as I see this happen on Facebook the other day and never thought this would happen to me.

‘I’m so grateful none of my family was home at the time and it was only me. Please spread the word.’

Molly was just 7 when she landed a part in BBC1’s EastEnders, and told Gazette News at the time: ‘I’m really excited about it because I have always wanted to be in East Enders.

‘All the other actors and actresses were really friendly and kind to me.’

She starred alongside June Brown, who played her grandmother Dot Branning, and John Altman, who played the notorious ‘Nasty Nick’.

Molly originally auditioned for the part of Bianca Jackson’s daughter – Tiffany – in the soap, but was eventually cast as Dotty.

Prior her two-year stint in EastEnders, Molly had already made several television appearances.

The child star first appeared on screens at the age of four in an advert for Ragu pasta sauce. She was also in adverts for Heinz baked beans and Bold 2-in-1.