The father of three young children killed in a horror crash at Oatlands earlier this year has returned to the place he last prayed with his son, just hours before he died.

Danny Abdallah and his wife Leila lost their son Antony, 13, and daughters Angelina, 12, and Sienna, 8, on February 1 when they were allegedly run down and killed by Samuel William Davidson.

Mr and Mrs Abdallah, and their cousin Bridget Sakr – whose daughter Veronique, 11, was also killed – were among a handful of special attendees at the Easter Sunday service at St Mary’s Cathedral.

Outside church Mr Abdallah told how the service held extra significance for him, as it was the last place he prayed with his son Antony on the morning of the tragedy.

Danny and Leila Abdallah (pictured) attended a special Easter Sunday service inside St Mary’s Cathedral, just over two months on from the tragic deaths of three of their children 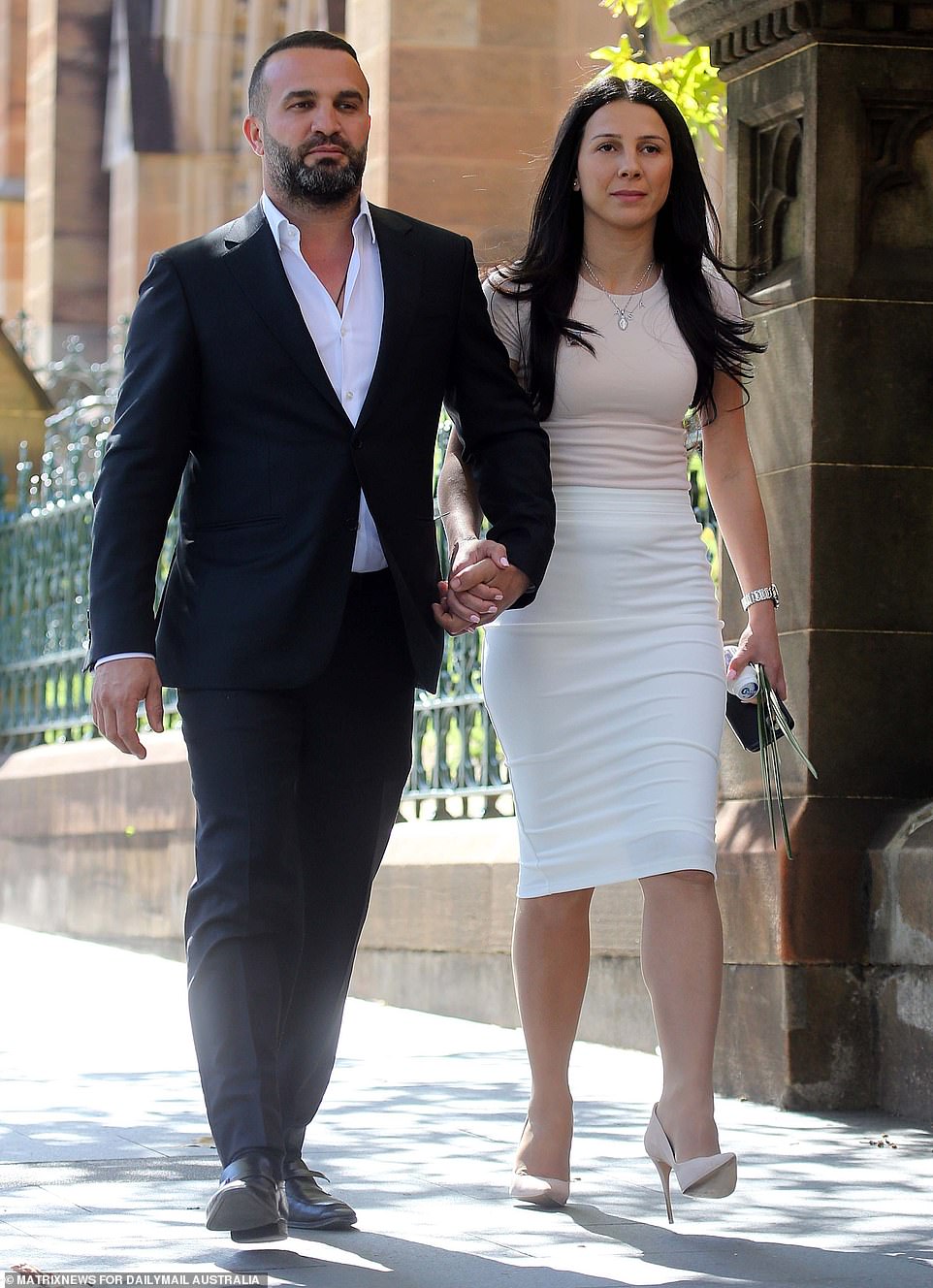 Outside the church Mr Abdallah told how the service at St Mary’s held extra significance for him, as it was the last place he had prayed with his son Antony on the morning of the tragedy

Mr Abdallah recalled how on the way to a basketball game he and Antony stopped at St Mary’s Cathedral for what would eventually be their last prayer together.

He told how they discussed how the cathedral had been built ‘to honour God’, before his son had pledged to play the upcoming basketball game in honour of NBA legend Kobe Bryant, who had died just days earlier.

‘On the morning of February 1, I was taking my son to basketball and we went to Sydney Grammar but we came about half-an-hour early,’ Mr Abdallah said.

‘We said a prayer together and that was when he said to me: “You know what dad, I’m going to play this game for Kobe Bryant”.

‘We haven’t been back since, so that’s why it was a special moment for us here today as well.’

Their last prayer together was mentioned by Bishop Anthony Fisher during his sermon to the congregation.

He also praised the bravery of Mr and Mrs Abdallah, and Bridget and Bob Sakr, for their strength in the face of such a horrible tragedy.

‘We extend to all of them our continued love and condolences for the deaths of their children,’

‘We all shared in their grief, but we marvelled at Leila’s strength and dignity, as they forgave the alleged drink driver whose ute caused the deaths of the children.’ 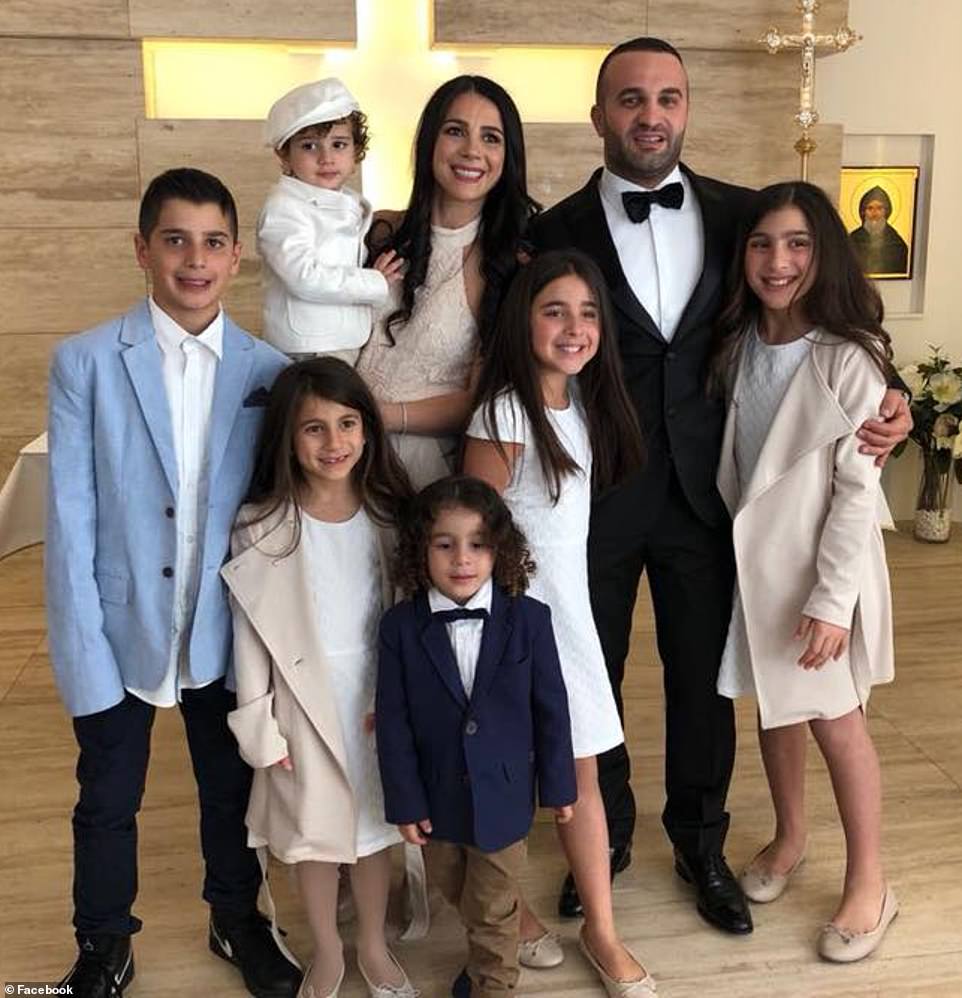 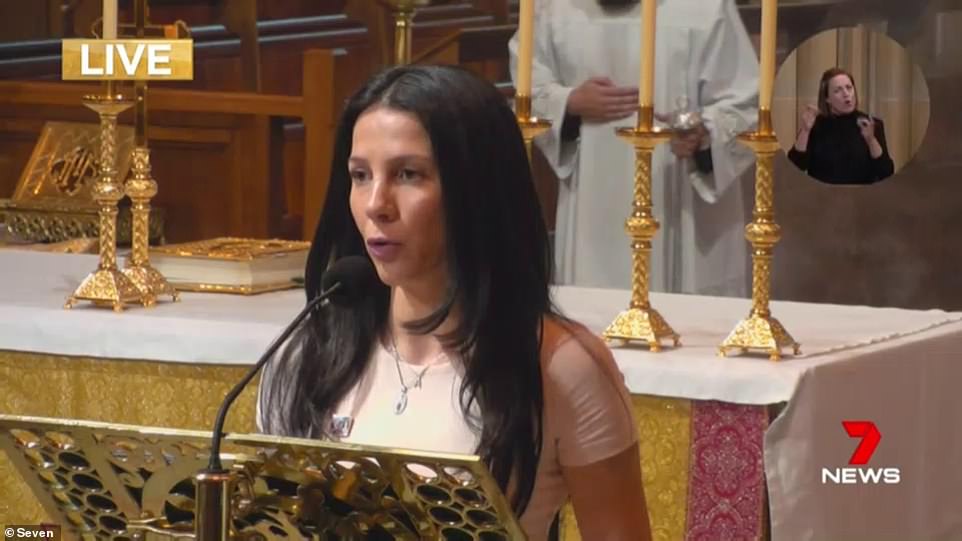 Mrs Abdallah read out a bible passage as part of the service, which was televised across NSW due to coronavirus measures forcing it to be closed to the public 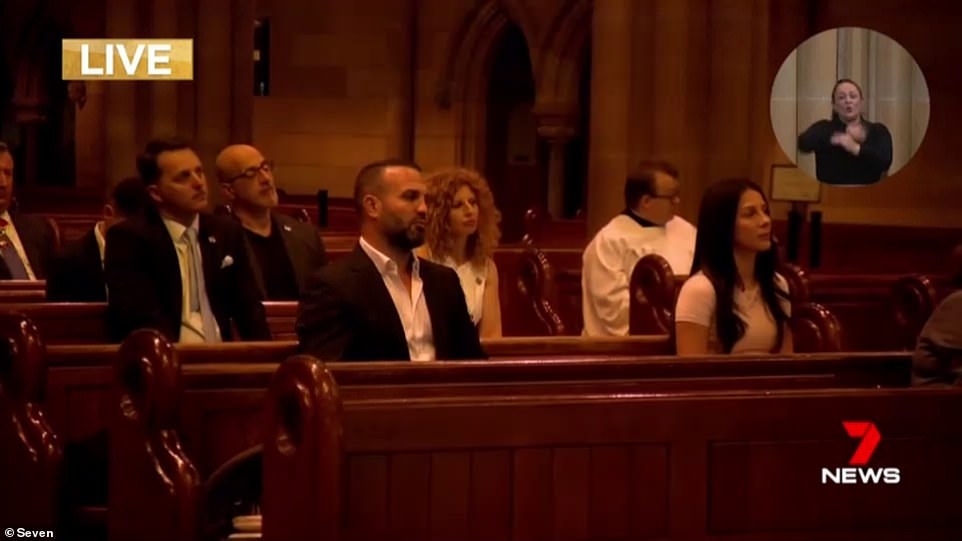 Mr and Mrs Abdallah, Bob Sakr, Michael and Bridget Sakr, and her partner Craig Mackenzie were all in attendance 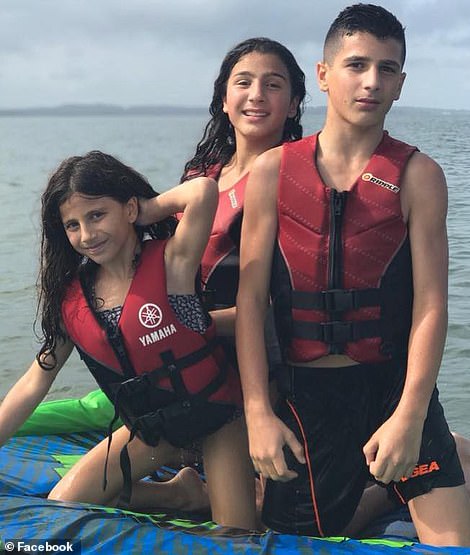 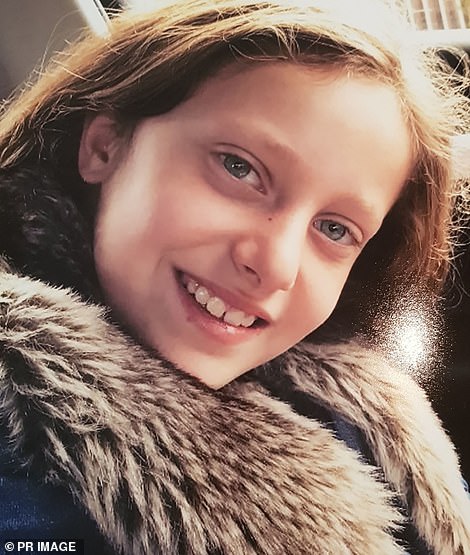 Antony, 13, Angelina, 12, and Sienna Abdallah, 9, (all left) and their cousin Veronique Sakr, 11, (right) were allegedly mowed down by drunk driver Samuel William Davidson as they walked to get ice cream

Both the Abdallah and Sakr families played special roles during the unusually sparse Easter Sunday mass, which only about 20 guests due to strict coronavirus measures.

Bridget Sakr and her son Michael assisted in the offertory procession, while a bible passage was read out by Mrs Abdallah.

‘Today we feel so honoured to be here and to be able to participate in mass.’

Mr Abdallah shocked Australia when he bravely fronted the media the morning after the tragedy that claimed the lives of his three children. 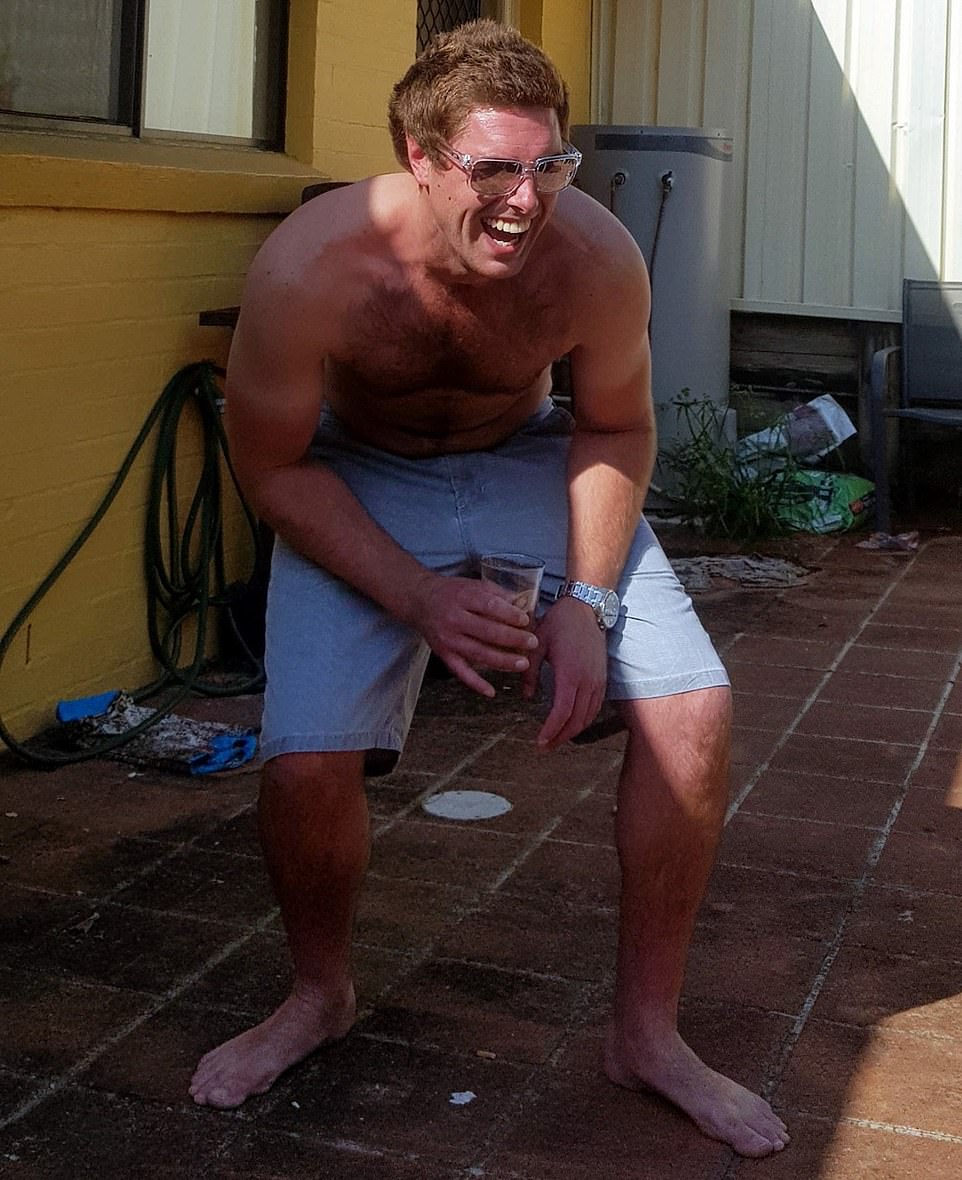 Samuel William Davidson (pictured), 29, was allegedly high on a cocktail of MDMA, cocaine and alcohol when he hit and killed four kids at Oatlands, in Sydney’s north, on February 1 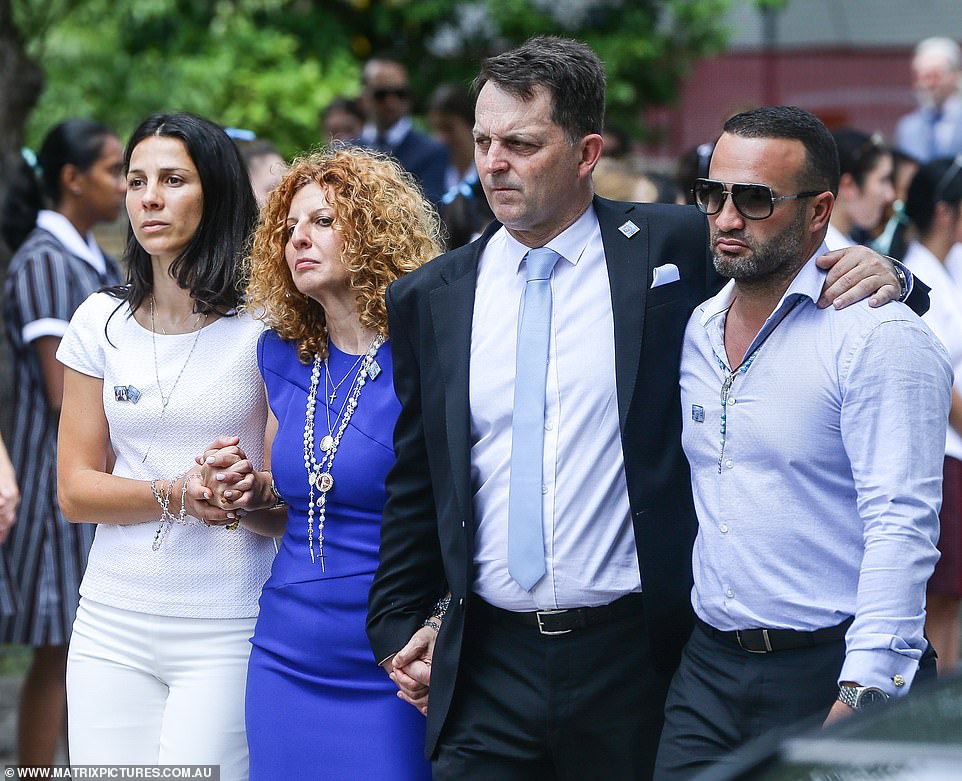 Bridget Sakr (in blue dress) is supported by her partner Craig MacKenzie, and Danny and Leila Abdallah (end left and right) whose children were killed in the same accident at Oatlands 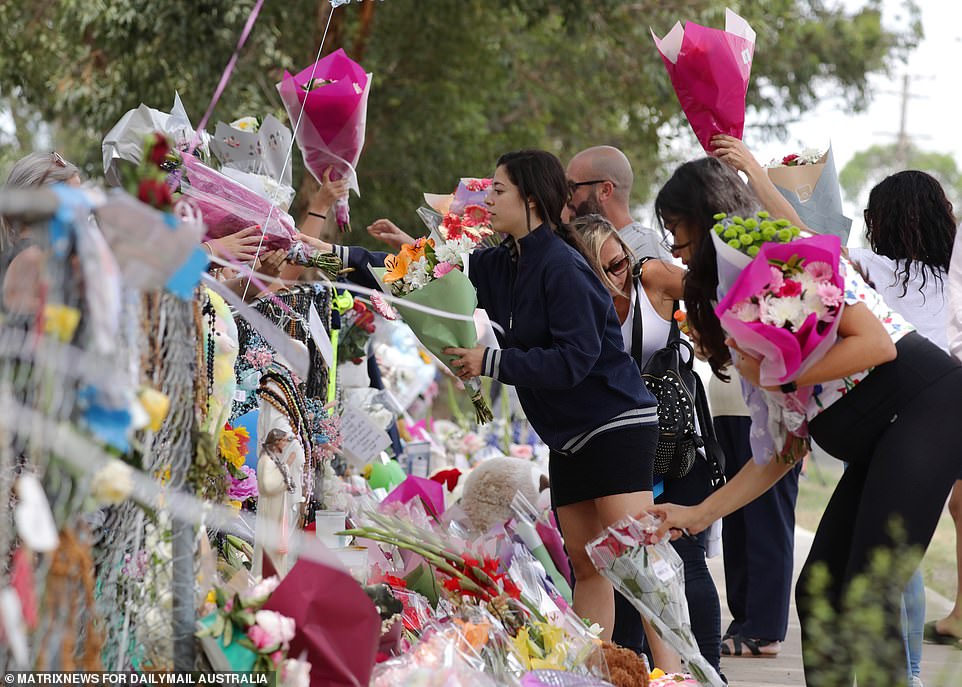 In the days and weeks that followed the accident, thousands of floral tributes were left at the scene on Bettington Road

Over the days and weeks that followed he and his wife Leila would continue to share stories of their children and regularly returned to the scene of the crash to pray.

They also vowed to forgive the driver Samuel William Davidson, despite the fact that he was allegedly drunk and on drugs at the time of the crash.

However they chose not to attend his court hearing earlier this month.

Davidson is facing a total of 34 charges, including four counts of manslaughter and also driving under the influence of cocaine, MDMA and alcohol.