EasyJet will CHARGE passengers to use overhead lockers

EasyJet customers have been left fuming after the airline announced it will start charging customers to store their luggage in overhead lockers.

The budget airline today revealed it will be halving baggage allowances from February 10.

Customers will only be allowed to bring on a small bag which must fit underneath the seat in front, or else they will have to pay up to £24 extra each way.

Those who pay the extra fees to choose their seats or have paid for extra leg room will be able to bring a ‘large cabin bag’ aboard flights to fit in the overhead lockers.

It comes despite easyJet bookings soaring for December after it was announced national lockdown restrictions will be eased over Christmas.

Meanwhile the company revealed last month the coronavirus crisis has seen it crash to an annual loss of £1.27billion – the first in its 25-year history. 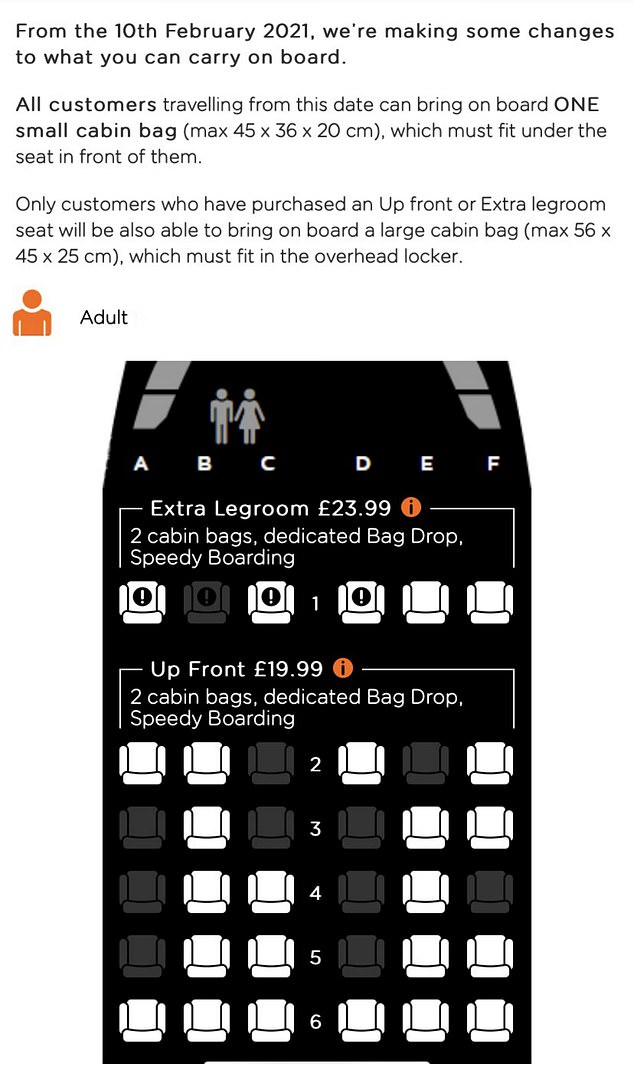 In an email to customers, easyJet claimed the changes were to ‘help improve punctuality’

EasyJet’s email read: ‘We’d like to let you know about some changes we’re making to our cabin bag policy to help improve punctuality and give certainty to customers on what they are allowed to bring on board.

‘From 10th February 2021, the seat you have booked will determine what bags you are able to bring on board.

‘Customers who have booked an Up front or Extra legroom seat can also bring on board a large cabin bag (max. 56 x 45 x 25 cm), which must fit in the overhead locker.

‘These seats can be selected at the time of booking, or at any time before you check-in.’

The airline added ‘large’ bags brought to the departure gate without proper seat selection will be placed in the hold. 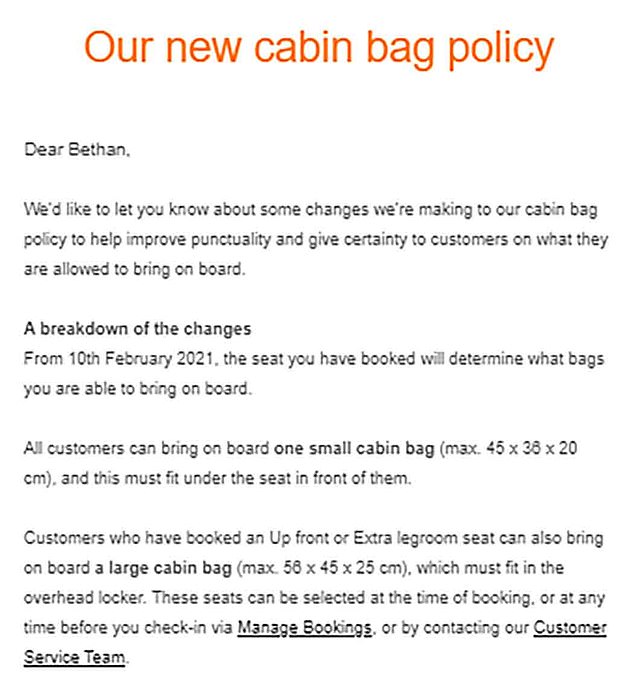 Customers will only be allowed to bring on a small bag which must fit underneath the seat in front, or else they will have to pay up to £24 each way extra 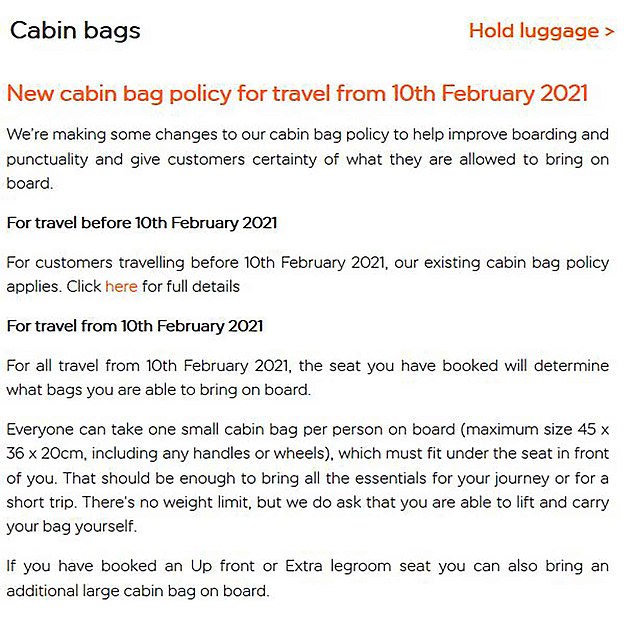 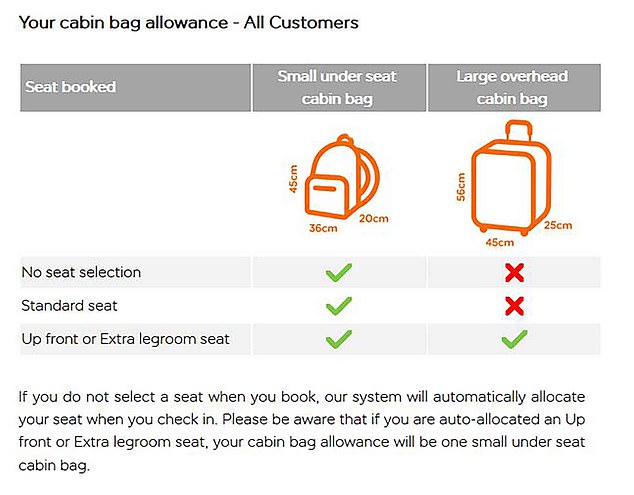 Previously, easyJet passengers were allowed to bring a large bag for the overhead locker, although some were placed in the hold when the lockers became full

But easyJet has been slammed by customers on social media, with many branding it ‘bad timing’.

One person wrote: ‘The one main selling point you had over your rivals was the generous hand luggage. Always my first airline of choice for frequent city breaks.

‘Now just set your stall to the same standard as Ryanair and Wizz. May as well just book with them in future. Nonsensical decision.’

What are the different restrictions on luggage with UK airlines?

Europe’s biggest budget airline encourages customers to use hang luggage this year amid the coronavirus pandemic.

It says checked-in luggage ‘significantly increase the risk’ of transmission between people, with hand luggage not exchanging hands.

But the promotion of hand luggage flies in the face of aviation industry advice.

Ryanair passengers can only have hand luggage bags up to 40x20x25cm for the cabin, so they fit under the seat.

Meanwhile checked-in luggage for flights with the budget airline costs at least £25 but can weigh up to 20kg.

BA has not changed its baggage policy during the virus. The British flag flyer allows one small item – for example a rucksack or handbag – up to 23kg or 40x30x15cm.

Yet customers are allowed another cabin bag each, which can be up to 24kg or 56x45x25cm.

Checked-in luggage with BA has to be under 90x75x43cm, which includes the handles and wheels. People can take one or two of these depending on their journey.

A price calculator on the airline’s website is used to decide extra charges for overweight items.

TUI flyers can take one item of hand luggage with them, but there are regulations.

It can be up to 10kg and has to be within 55x40x20cm, with items such as laptops and handbags fitting ‘within the one piece of hand luggage’.

But different to other airlines, the price of checked-in luggage changes depending on if it is just a flight or part of a package holiday.

The latter allows passengers to have 20kg luggage.

Jet2 passengers are allowed one item of hand luggage in the cabin for free. It can be up to 10kg or 56cmx45cmx25cm, including its wheels and handles.

Flyers can also take another small item with them, such as a handbag or laptop bag, if it fits under their seat.

Checked-in luggage with the airline can be up to 22kg, depending on the journey.

Another said online: ‘Poor timing when they should be doing all they can to encourage us back.’

They added: ‘Punishment for daring to have belongings. Do they even want our business now?’

A woman put: ‘Just another way to make money to stop people bringing on their small cabin size suitcases which now you won’t be able to do and will therefore have to pay for more checked luggage.’

‘Yes we understand your industry is struggling, but this might be one step too far for customers, especially if all the other sheep airline follow suit. Shame on you, seriously!’

And one man added: ‘Pretty poor that they are changing the rules after taking bookings.’

The current luggage policy will remain in place until the new rules come into effect next year.

Previously, easyJet passengers were allowed to bring a large bag for the overhead locker, although some were placed in the hold when the lockers became full.

EasyJet said last week bookings for domestic flights in December had soared after it emerged UK-wide restrictions would be eased over Christmas.

The most popular routes included London and Bristol to Belfast and London to Edinburgh.

Easyjet saw the jump in searches and bookings between Monday and Wednesday last week.

Ministers confirmed last Tuesday three households could bubble for five days over Christmas – which had been widely reported since the weekend before.

The budget carrier, whose shares have risen, added bookings for next spring and summer were rising after promising news on vaccines.

But in more grim news for the firm, CEO Johan Lundgren told investors last month the pandemic means 80 per cent of its flights will be grounded from January to March.

In the past 12 months passenger numbers have halved to 41.8million as demand for flights fell off a cliff as Covid-19 gripped Europe.

But in better news, sales jumped by 50 per cent last month following good news about the efficacy of two vaccines, Mr Lundgren said.

EasyJet called off most of its UK flights last month because of the Government’s latest lockdown.

To survive the pandemic so far, the airline has raised over £1billion from sale and leaseback deals for its aircraft, taken a £600million loan from the government, cut 4,500 jobs, and asked shareholders for £419million.

In October British Airways’ parent company IAG said it suffered a £5.1billion loss in the first nine months of 2020 after profits plunged due to coronavirus.

Ryanair revealed heavy losses for the past six months of £176million with boss Michael O’Leary saying customers will not be refunded for flights in November despite Boris Johnson banning all but essential travel.

It is feared most airlines will be forced to ground their fleets and lay off staff because of the current crisis.

Industry leaders say problems have been worsened by the Government’s 14-day quarantine rule and a lack of progress on an air passenger testing regime.

EasyJet group’s pre-tax loss for the year to September 30 comes after passenger numbers halved to 48.1 million as the pandemic crippled the aviation industry. 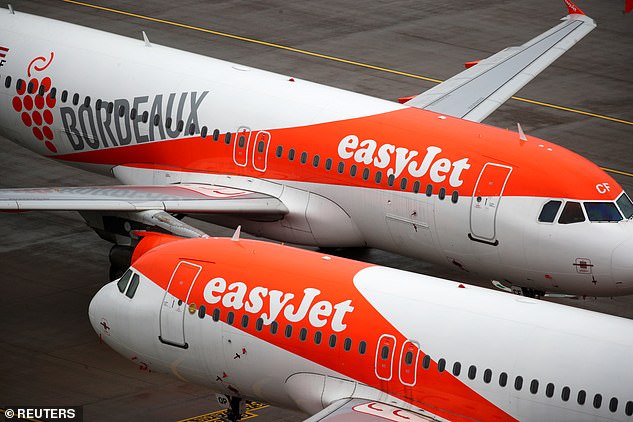 EasyJet has made its first loss for 25-years, losing £1.27billion because of the coronavirus pandemic (file photo) 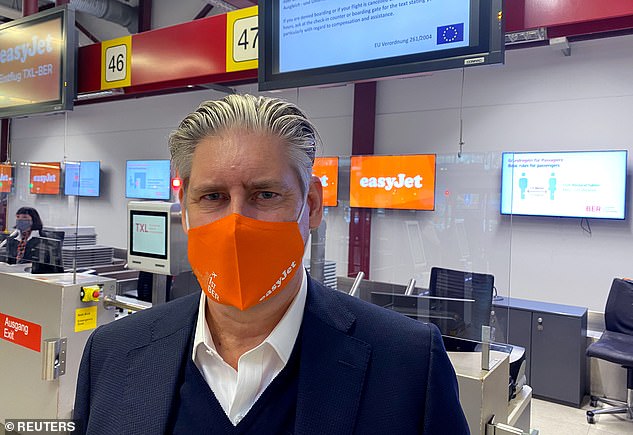 It warned it expects to fly no more than around 20 per cent of planned services in the first quarter of its year to next September as a relentless second wave of the pandemic batters demand.

EasyJet’s losses compare with profits of £430 million the previous year.

On an underlying basis, easyJet reported pre-tax losses of £835 million against profits of £427 million the previous year, which was in line with expectations.

Mr Lundgren said the group had responded ‘robustly and decisively’ to the crisis and cheered ‘welcome news’ on a possible Covid-19 vaccine.

He said: ‘While we expect to fly no more than 20 per cent of planned capacity for the first quarter of 2021, maintaining our disciplined approach to cash generative flying over the winter, we retain the flexibility to rapidly ramp up when demand returns.

‘We know our customers want to fly with us and underlying demand is strong.’ He added the group expected to ‘bounce back strongly’.

William Ryder, Equity Analyst at Hargreaves Lansdown: ‘EasyJet shareholders will be hoping that the worst is now behind them.

Although capacity is still expected to be down dramatically in the first quarter of easyJet’s 2021 financial year, positive vaccine news has promised light at the end of the tunnel.

‘EasyJet will be a different company than the one that went into this crisis. The budget airline has dramatically reduced the size of its workforce, cut costs and the balance sheet is badly scarred.

‘Investors should remember that a severe recession is still possible, and there may still be turbulence on the journey to a recovery.’