Mums-to-be who eat plenty of green vegetables could protect their children against asthma, a study shows.

Babies born to women who regularly have broccoli, spinach, cabbage, sprouts or kale were half as likely to suffer wheezing by the age of two.

But the diet only works if expectant mums include healthy vegetables in their diet during the first few months of their pregnancy.

It affects people of all ages and often starts in childhood, although it can also develop for the first time in adults.

There’s currently no cure, but there are simple treatments that can help keep the symptoms under control so it doesn’t have a big impact on your life.

The main symptoms of asthma are: wheezing (a whistling sound when breathing), breathlessness, a tight chest, coughing.

The symptoms can sometimes get temporarily worse. This is known as an asthma attack.

See your GP if you think you or your child may have asthma.

In the latest study, by a team at the National Research Institute for Child Health and Development in Tokyo, 310 babies were tracked after being born to mums who had completed periodic food questionnaires during pregnancy.

When each child reached the age of two they were checked for signs of asthma.

The results, in the European Journal of Clinical Nutrition, showed kids whose mums ate the largest amounts of green, leafy vegetables were 52 per cent less likely to have signs of wheezing – a common asthma symptom – than those who mums ate the least.

But the benefits only seemed to materialise in those consuming lots of vegetables during the early stage of pregnancy, when babies are in a crucial developmental stage.

In a report on the findings, scientists said: ‘Maternal vegetable intake during early pregnancy may have a protective effect against asthma in offspring at two years of age.’

More than one million children in the UK suffer with asthma and rates of the disease are among the highest in Europe.

Every day, an average of three people in Britain die from the condition.

Emerging evidence suggests mothers’ diets could be a key factor in children’s risk of developing the illness.

Last year, scientists at Queen Mary University in London found babies were twice as likely to get asthma if mums ate large amounts of sugar in pregnancy.

Rates of allergic asthma – triggered by dust, cats and pollen – soared by 101 per cent in seven-year-olds when mums who ate the most sugar while expecting were compared to those who ate the least.

Sugar is thought to send immature immune systems into overdrive – triggering inflammation in the lungs at a time when they are still developing. 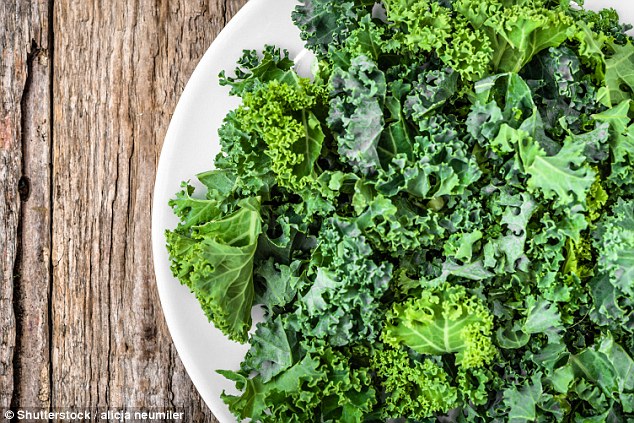 Babies born to women who regularly have greens like kale were half as likely to suffer wheezing by age two, according to the National Research Institute for Child Health, Tokyo