An eating disorder charity extended its helpline hours during Lose a Stone in 21 Days with Michael Mosley on Channel 4 and was swamped with calls.

While the programme was airing there was a 50 per cent increase in people contacting Beat.

Presenter Dr Mosley says the program, that restricts participants to 800 calories a day,  is to ‘get our health back on track’ after lockdown. 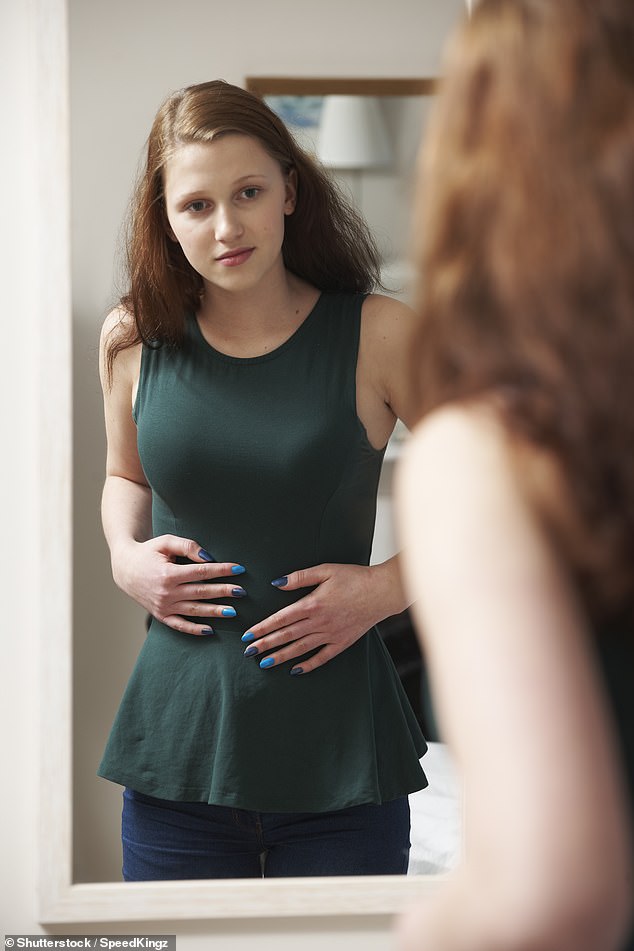 The eating disorder charity, Beat, had a 50 per cent increase in contact while the show was airing. Pictured: Stock photo of a teenage girl looking in the mirror

Beat had previously written to Channel 4 asking them to be careful with what they broadcast about weight-loss.

They had also provided guidance on how to report on weight-loss in a ‘responsible and non-triggering way’.

The charity’s director of services Caroline Price said: ‘It is incredibly worrying to see a national programme yet again promoting extreme weight loss and crash dieting.

‘The promise inherent in the title is likely to attract people suffering from or vulnerable to eating disorders and risks encouraging those affected to attempt the methods shown despite the damage this could cause.

‘Research has shown that dietary restraint, including the restriction of calories, has been found to be a risk factor in the development of an eating disorder.

‘The programme did not appear to look after the participants’ mental health in any way, such as consultations with a psychiatrist.

‘However, it did have an alarming focus on the participants’ weight, BMI and measurements, as well as encouraging them to carry out activities that we know those affected by eating disorders may engage in, such as destroying food to avoid eating it or fixating on eating a restricted number of calories.’

‘It is very disappointing that once again, their needs have been ignored by broadcasters.’

Michael Mosley and his diets

Four years ago Michael Mosley used the 5:2 diet to lose 20lbs (9kgs) and reverse his diabetes.

He now promotes the diet where you eat normally for five days and then cut your calories to about 600 for the other two days.

More recently Mr Mosley and other nutritionists have created the Fast 800 diet which helps people to lose weight quickly.

The diet includes fasting which helps people to maintain keeping the excess weight off.

The show focuses on the increased threat coronavirus poses to people with overweight or obese BMIs.

Obese people are 37 per cent more likely to die from coronavirus, a study from  Liverpool University and Imperial College London found.

Participants in the show use Dr Mosley’s Fast 800 diet, which aims for people to eat fewer than 800 calories a day.

The former BBC star Dr Mosley also came up with the famous 5:2 diet, where on two days of the week dieters only eat around 500 calories.

Over half of the UK’s population, 66 per cent of men and 57 per cent of women, are overweight or obese.

A Channel 4 spokesperson said: ‘The series examines the evidenced link between Covid-19 and the very real threat it poses to those who have a BMI in the obese or overweight categories, as highlighted by a recent study led by Liverpool University and involving Imperial College London that found obese people are around 37 per cent more likely to die if they catch Covid-19.

‘All episodes clearly state that a short-term 800-1,000 calorie diet is only suitable for people whose BMI puts them in the overweight or obese categories and that it should be done with proper medical supervision.

‘The health and welfare of each contributor is of paramount importance to both Channel 4 and the production.

‘A number of health checks were undertaken on contributors before they embarked on the regime and support is ongoing.’