Eating meals alone biggest cause of unhappiness after mental illness

Eating meals alone is the biggest cause of unhappiness after mental illness, a study has found.

A quarter of adults eat alone all or most of the time, often because of hectic lifestyles or social isolation.

And this makes us more unhappy than financial problems or physical disabilities, the research found.

One quarter of all adults eat alone all or most of the time, often due to their lifestyle 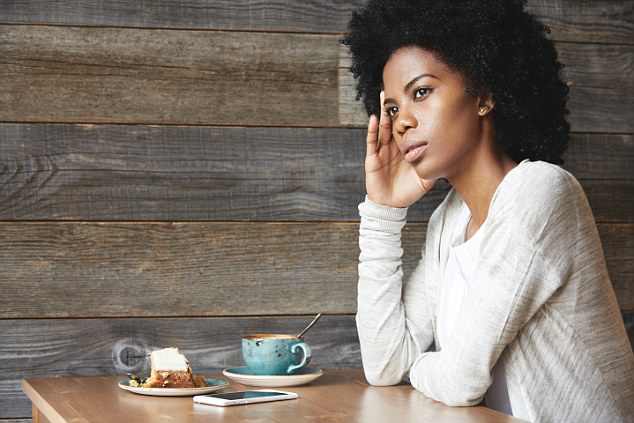 For the study, more than 8,000 people were asked questions that measured happiness, satisfaction, self worth and anxiety on a ‘wellbeing’ scale from zero to 100, called the Living Well Index. Those who always ate alone scored almost eight points lower on average than those who never did.

Nearly a fifth of those who live by themselves said they eat alone all of the time, particularly those who are single or overworked.

Most retired people, however, said they never or only occasionally eat alone. An unsatisfactory sex life, sleep deprivation or feeling time-pressured were also significant causes of unhappiness.

Chris Sherwood, head of relationship counselling service Relate, said: ‘We know that good quality relationships with friends and family are essential to our wellbeing so it’s good to see the power of face-to-face interaction coming through so strongly on the Living Well Index.

‘Eating together more often is a simple way of enhancing your connection with others so why not give it a try?’

The study, published by Sainsbury’s and carried out by Oxford Economics and the Centre for Social Research, states: ‘While this analysis suggests that eating alone may be detrimental to people’s wellbeing, the barriers to sitting down to eat in groups more regularly are many and complex.

‘For some, a failure to do so may be driven largely by social isolation and a lack of personal connections. For others, the key barrier could be bending time in their otherwise hectic lifestyles.’

The study found six in ten single people eat alone, compared to only around one in eight of those in a relationship. With more people living by themselves, or divorcing later in life, there are concerns that traditional cooked family meals are in decline.

Some 30 per cent of people who work more than 60 hours a week ate alone all or most of the time, compared to 22 per cent of the general working population. The wellbeing index found childless people in ‘generation X’, aged 35 to 54, are the least socially connected, while young families are the most well connected.

Baby boomers, meanwhile, were found to benefit from close relationships with neighbours.

The average figure for wellbeing came in at 60.7 out of 100, with almost half of that deficit of happiness attributed to four factors.

Those were eating alone, having a poor sex life, lack of sleep and time pressure. Eating alone lowered a person’s score on average by 7.9 points below the 60.7 figure, with a mental health condition lowering it by 8.5 points.

It comes after Professor Helen Stokes-Lampard, chairman of the Royal College of GPs, called for GPs to be able to refer patients to social activities to combat loneliness, and for a national publicity campaign to tackle the problem.

Councillor Izzi Seccombe, of the Local Government Association’s community wellbeing board, said: ‘There needs to be greater public awareness of loneliness as a serious illness. We all need to be on the lookout for each other.’