Time to ditch the sausages? Eating meat or poultry just three times a week can increase your risk of heart disease, pneumonia and diabetes, study warns

Regular meat-eaters are more likely to suffer from chronic health conditions than those who shun or ration animal products, a study has found.

The research from the University of Oxford found a meat-lover who eats 70 grams of meat  — processed or unprocessed — more than a peer is at 15 per cent higher risk of heart disease, 30 per cent more likely to get diabetes and almost a third (31 per cent) more likely to develop pneumonia in the future.

But the risks of a diet packed with meat also apply to poultry, with a 30 gram daily increase in dietary fowl resulting in a 14 per cent greater risk of diabetes.

Data from almost half a million Britons who took part in the decade-long study also reveals people who eat meat three or more times a week are more likely to smoke, drink alcohol, be obese and eat an inadequate amount of fruit and vegetables.

However, the study authors say most of the health-related issues are reduced when accounting for BMI.

This suggests some of the correlation between meat and health problems is caused by overweight or obese people — who are at increased risk of health conditions due to their weight — that eat a standard amount of meat.

As a result, it is hard to say how much eating lots of meat directly causes health concerns or if it is a case of people who eat meat are more likely to be fat and therefore more at risk of these same health concerns.

However, comparison of data from 475,000 people published in the journal BMC Medicine does show a significant link between eating meat and health complaints. 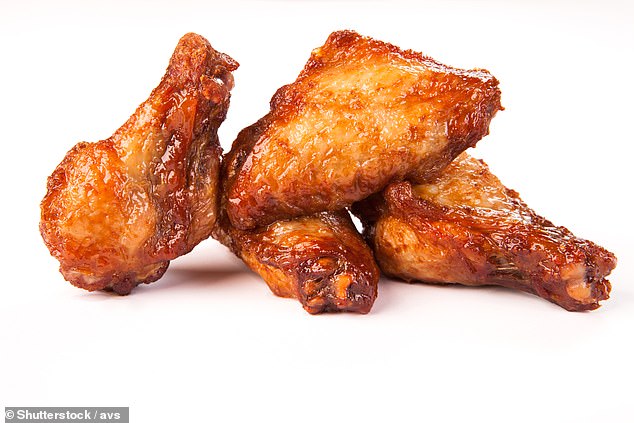 The risks of a diet packed with meat also apply to poultry, with a 30 gram increase in dietary fowl resulting in a 14 per cent greater risk of diabetes. One chicken wing contains about 30 grams worth of meat 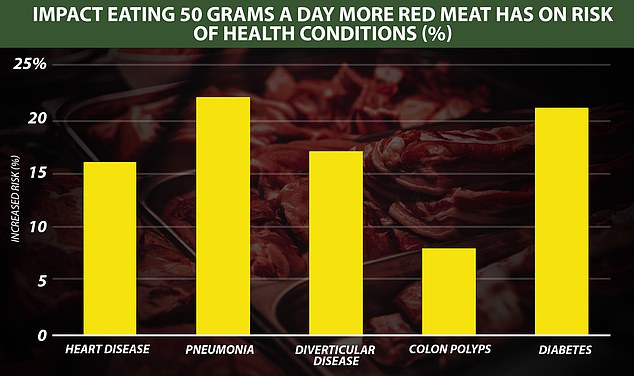 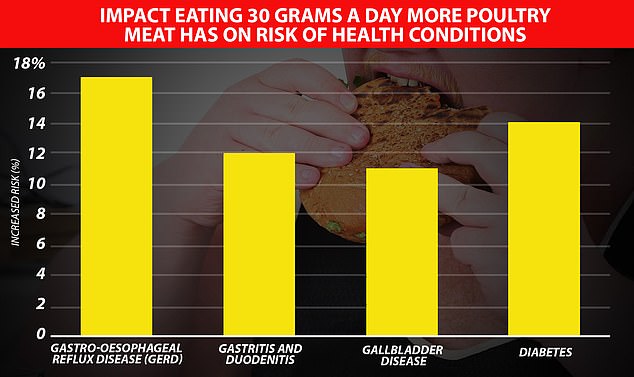 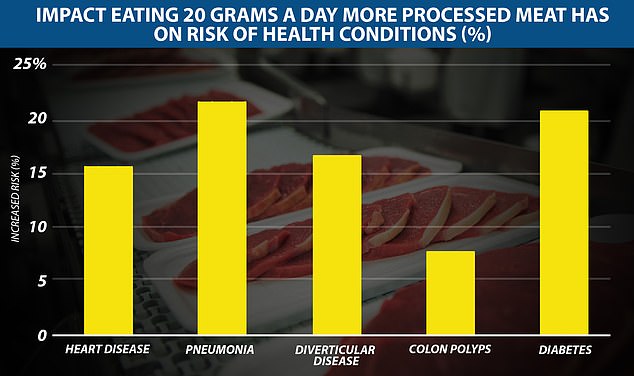 Boiled, fried, scrambled or in an omelette, whole eggs pose a threat to health and eating more of them increases your risk of death, a study claims.

Researchers found eating just half a whole egg — which includes the yolk and the white — increases the likelihood of premature death by seven per cent.

Risk of early death increases by a further seven per cent for every half an egg on top of this, so a person eating one egg a day has at 14 per cent greater chance of death than someone who avoids the food.

Chinese researchers who led the study believe high fat and cholesterol levels in eggs are to blame.

They warned that people should use only the whites or switch to healthier egg substitutes, which lower the risk of dying.

Substituting an equivalent amount of nuts or legumes for half a whole egg reduced death rates by up to a third. Poultry, dish or dairy products had a similar effect.

For example, every 70 gram increase in daily intake of unprocessed meat and red meat results in a 31 per cent heightened risk of pneumonia. The figures for diverticular disease and colon polyps are 19 and 10 per cent, respectively.

Researchers suggest that unprocessed red meat and processed meat may increase the risk of heart disease because they are major sources of saturated fatty acids.

Lead author Dr Keren Papier, from the University of Oxford, said: ‘We have long known that unprocessed red meat and processed meat consumption is likely to be carcinogenic and this research is the first to assess the risk of 25 non-cancerous health conditions in relation to meat intake in one study.

‘Additional research is needed to evaluate whether the differences in risk we observed in relation to meat intake reflect causal relationships, and if so the extent to which these diseases could be prevented by decreasing meat consumption.

‘The result that meat consumption is associated with a lower risk of iron-deficiency anaemia, however, indicates that people who do not eat meat need to be careful that they obtain enough iron, through dietary sources or supplements.’

The World Cancer Research Fund recommends that people should limit red meat consumption to no more than three portions per week (around 350–500g cooked weight in total), and processed meat should be eaten rarely, if at all.