Eating one freshwater fish a YEAR is equal to drinking water with PFAS for a month, study warns

Eating just one freshwater fish a year is the equivalent to drinking water containing ‘forever chemicals’ for a month, a study has found.

Perfluoroalkyl and polyfluoroalkyl substances – or PFAS – have many uses in society, but have also been linked to cancer and other health conditions.

Researchers from the Environmental Working Group (EWG) analysed 500 samples of locally caught fish fillets from bodies of water across the USA.

They calculated that eating the contaminated fish equates to drinking a month’s water with a PFAS concentration of 48 parts per trillion – a level that may be harmful.

Eating just one freshwater fish a year is the equivalent to drinking PFAS-containing water for a month, a study has found (stock image) 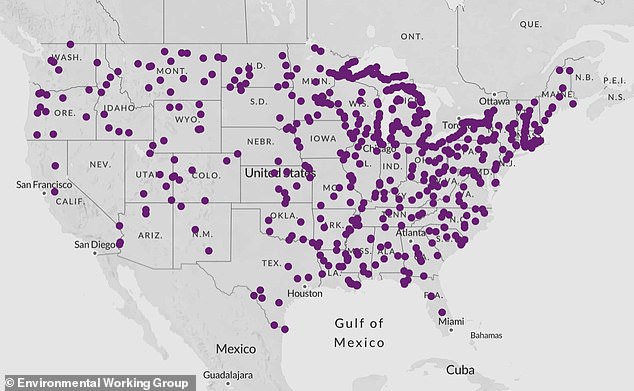 Map showing where all fish samples were taken. Each sample point represents a fish fillet composite of one to 10 aggregate samples of the same species from the same location

PFAS are manmade chemicals used as oil and water repellents and coatings for common products including cookware, carpets, and textiles.

These endocrine-disrupting chemicals do not break down when they are released into the environment, and they continue to accumulate over time.

PFAS chemicals can contaminate drinking water supplies near facilities where the chemicals are used.

PFAS contamination has been detected in water near manufacturing facilities as well as military bases and firefighting training facilities where foam containing PFAS is used.

They also enter the food supply through food packaging materials and contaminated soil.

This is 280 times greater than the amount recorded in commercially caught and sold fish.

One would have to buy and eat fish from the supermarket for a whole year to ingest the equivalent level of PFAS from just one meal of freshwater fish.

Senior EWG scientist and the study’s lead author Dr David Andrews said: ‘People who consume freshwater fish, especially those who catch and eat fish regularly, are at risk of alarming levels of PFAS in their bodies.

‘Growing up, I went fishing every week and ate those fish. But now when I see fish, all I think about is PFAS contamination.’

There are about 12,000 PFAS in existence which have many uses, including in firefighting foams, the non-stick coatings on frying pans and textiles.

They were first developed in the 1940s, but since then many scientific tests have linked the synthetic chemicals to health problems.

Despite many manufacturers phasing them out of their products, they are still routinely detected all around us.

Their longevity is thanks to a bond they all contain between carbon and fluorine atoms that nothing in nature can break.

Despite many manufacturers phasing them out of their products, PFAS are still routinely detected all around us. Their longevity is thanks to a bond they all contain between carbon and fluorine atoms that nothing in nature can break 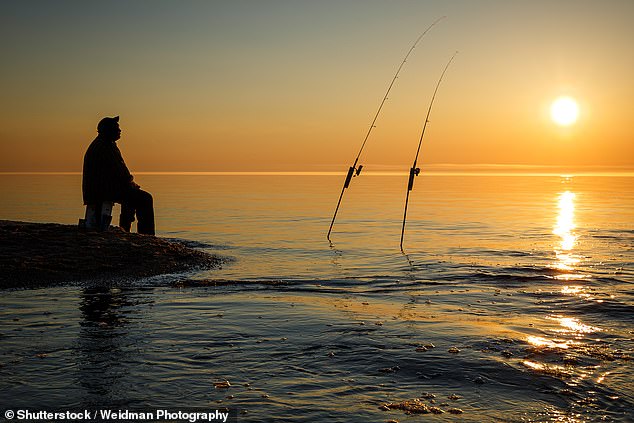 PFAS are thought to get into the environment through industrial emissions, transfer from packaging, wastewater and evaporation from the foams.

The extra-strong carbon-fluorine bond means they can pass through most water treatment systems completely unharmed, as well as into the bloodstream.

PFAS are found in the bloodstream of virtually everyone, including newborn babies.

They have been linked to infertility, behavioural problems, birth defects, high cholesterol levels and even various cancers, including kidney, testicular and ovarian. 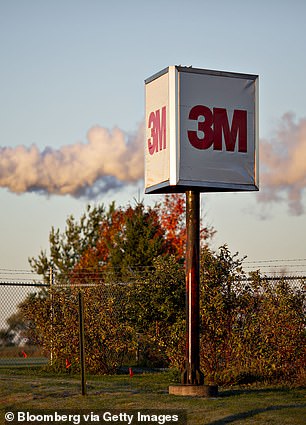 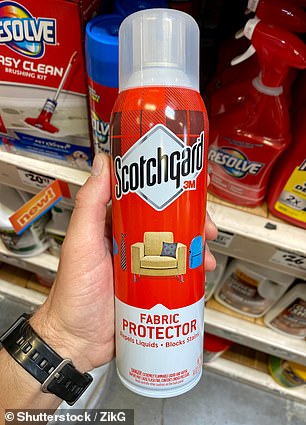 The most common PFAS detected was perfluorooctanesulfonic acid, or ‘PFOS’ – a substance formerly used by 3M to make the Scotchgard fabric protector (right)

PFAS ARE STILL BEING SOLD IN COSMETICS IN THE UK

Popular make-up brands including Urban Decay and Revolution are selling ‘dozens of products’ in the UK containing PFAS.

They are often used for their oil resistance and water resistance, as well as film-forming properties.

They’re used to condition and smooth the skin, making it appear shiny, or to improve product consistency and texture.

Make-up brands identified as containing PFAS in an investigation by the BBC include L’Oréal’s Urban Decay, Revolution and Inglot.

The study, published today in Environmental Research, used PFAS levels in fish tissue collected between 2013 and 2015 for national monitoring programmes.

Nearly all fish in US rivers and streams are contaminated with PFAS to a level of parts per billion, according to data from the Environmental Protection Agency (EPA).

The most common PFAS detected was perfluorooctanesulfonic acid, or ‘PFOS’ – a substance formerly used by 3M to make the Scotchgard fabric protector.

This was found in about 75 per cent of PFAS-containing fish samples.

Dr Tasha Stoiber, EWG senior scientist and co-author, said: ‘PFAS contaminate fish across the US, with higher levels in the Great Lakes and fish caught in urban areas.

‘PFAS do not disappear when products are thrown or flushed away.

‘Our research shows that the most common disposal methods may end up leading to further environmental pollution.’

Despite widespread knowledge of their harm, the EWG estimates over 40,000 industrial polluters in the US are still discharging the toxic chemicals into surface water.

These include manufacturing facilities, landfill sites, airports, water treatment plants and areas where firefighters have used PFAS-containing foam to put out a blaze.

This contamination has resulted in them spreading into the drinking water of an estimated 200 million Americans, as well as soil, crops and wildlife, including fish.

Many communities rely on catching their own freshwater fish as a source of protein, and cannot afford to purchase it from shops to reduce their PFAS exposure.

They are therefore disproportionately affected by the issue, and researchers hope their results will lead to stricter regulations.

‘The EPA needs to move swiftly to set regulations for the industries most likely to be dumping PFAS into the environment.’

Student researcher at Duke University Nadia Barbo added: ‘There should be a single health protective fish consumption advisory for freshwater fish across the country.’

Rainwater everywhere on Earth has been found to contain dangerous levels of man-made ‘forever chemicals’ linked to cancer and other illnesses, a study has found.

Perfluoroalkyl and polyfluoroalkyl substances (PFAS) have many uses, including in firefighting foams, the non-stick coatings on frying pans, and textiles.

They are thought to get into the environment through industrial emissions, transfer from packaging, wastewater and evaporation from the foams.

Researchers from Stockholm University and ETH Zurich have conducted laboratory and field work on the presence and transport of PFAS for the past decade.

They claim they can be found in rainwater and snow in even the most remote locations on Earth, like Antarctica and Tibet.

The fluorinated chemicals have been linked to a wide range of human health concerns, including cancer, immune system disorders, obesity and fertility issues.