Steak and cheese should be back on the menu, new research suggests.

When eaten alongside fruit, vegetables and fish, unprocessed animal products significantly lower a person’s risk of suffering a stroke, heart attack or premature death, according to a study review of more than 218,000 people.

The researchers claim previous studies linking the fat-rich diets of the US and western Europe to heart disease were flawed, with more recent findings suggesting saturated fats may not be as harmful as once thought.

Speaking of the results, published in The Lancet, study author Professor Salim Yusuf, from McMaster University in Hamilton, Canada, said: ‘Thinking on what constitutes a high quality diet for a global population needs to be reconsidered.

‘For example, our results show that dairy products and meat are beneficial for heart health and longevity. This differs from current dietary advice.’

Steak and cheese should be back on the menu, new research suggests (stock)

DO SATURATED FATS IN DAIRY INCREASE THE RISK OF HEART DISEASE?

Saturated fats found in yoghurt, cheese, butter and milk do not increase the risk of heart disease, research suggested in July 2018.

Lead author Dr Marcia Otto, from the University of Texas, Houston, said: ‘Our findings not only support, but also significantly strengthen, the growing body of evidence which suggests that dairy fat, contrary to popular belief, does not increase risk of heart disease or overall mortality in older adults.

‘In addition to not contributing to death, the results suggest that one fatty acid present in dairy may lower risk of death from cardiovascular disease, particularly from stroke.’

Dietary guidelines in the US and UK recommend people people opt for low or no-fat dairy, however, the researchers warn such options are often high in sugar, which can drive heart disease.

Milk, yoghurt and cheese contain nutrients such as calcium, which lowers blood pressure, as well as anti-inflammatory fatty acids.

Dr Otto said: ‘Consistent with previous findings, our results highlight the need to revisit current dietary guidance on whole-fat dairy foods, which are rich sources of nutrients such as calcium and potassium.

‘These are essential for health not only during childhood but throughout life, particularly also in later years when undernourishment and conditions like osteoporosis are more common

‘Consumers have been exposed to so much different and conflicting information about diet, particularly in relation to fats.

‘It’s therefore important to have robust studies, so people can make more balanced and informed choices based on scientific fact rather than hearsay.’

The researchers analysed five studies with a total of more than 218,000 participants from over 50 countries across five continents.

Co-author Dr Mahshid Dehghan said: ‘Our results appeared to apply to people from different parts of the world and so the findings are globally applicable.’

The scientists divided all of the studies’ participants into five groups according to the quality of their diets. This was based on the amount of fruit, vegetables, legumes, fish, meat and dairy they ate.

Over a period of up to 25 years, the participants were followed to determine if they suffered a heart attack or stroke, as well as if they died.

‘Unprocessed meat is associated with a benefit’

Results suggest people with the highest quality diets, which include both unprocessed animal and plant products, are less at risk of a heart attack, stroke or heart failure.

Such eating plans also reduce a person’s risk of dying prematurely, from a heart-related event or otherwise.

‘Regarding meat, we found that unprocessed meat is associated with [a] benefit.’

The findings of one of the studies, which was made up of 135,335 people, found that those who rely on carbohydrates for 60 percent of their energy, with little saturated fat, are more likely to die early.

Another study suggested a person’s carbohydrate intake should make up around half of their daily calorie consumption. This allows other nutrients, such as protein and fat, to also be included in their diets. 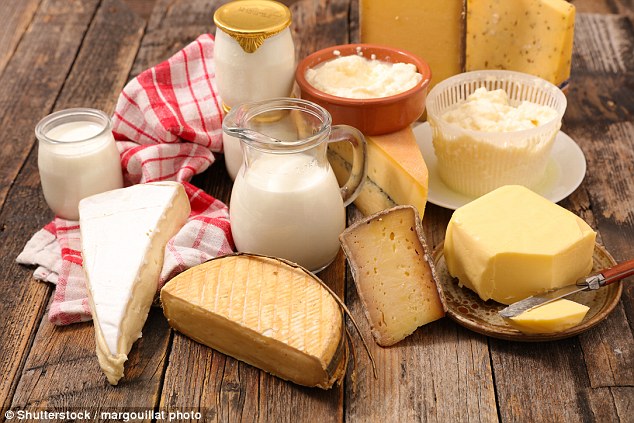 In the 1950s, nutritional research turned away from deficiencies, such as scurvy, to so-called diet-heart hypotheses.

Scientists questioned why people living in the US, Northern Europe and the UK were more prone to heart disease, while those in the Mediterranean and Japan had a lower risk.

Studies blamed fats, particularly saturated varieties found in lard and butter, which, according to the current study review’s researchers, ‘were enormously influential while undergoing limited scrutiny as to the rigor of their methods’.

Since the studies’ publications, the NHS and Centers for Disease Control and Prevention issued guidance on how people should limit their meat and dairy intake, and opt for lean, low-fat options.

Yet, the review’s scientists add the results of previous studies have not been replicated when carrying out more accurate statistical analyses or when collecting data more carefully.