Ebola fears are ramping up in Uganda, with the killer virus having now reached the African country’s bustling capital.

More than 100 people have so far been infected with the virus. Thirty-one patients have died.

Districts at the heart of the ever-growing outbreak have already brought in Covid-style lockdowns in order to contain the virus.

Calls have been made for similar measures in Kampala — Uganda’s capital — where 17 cases have been detected.

Health chiefs today insisted the situation is not ‘getting out of hand’, despite fears that the virus is spreading in the community.

The Princess Royal, sister of King Charles, arrived in the country on Tuesday.

Princess Anne has previously been said to be comfortable visiting places where she is could catch an illnesses and the risk does not put her off.

The Princess Royal, who arrived in the east African country on Tuesday, has met dozens of people, including Ebola hotspot and capital city Kampala. Picutred: Princess Anne on the second day of her visit at Opportunity International bank in the Nakivale Refugee Settlement UNHCR Base Camp in Kyegegwa 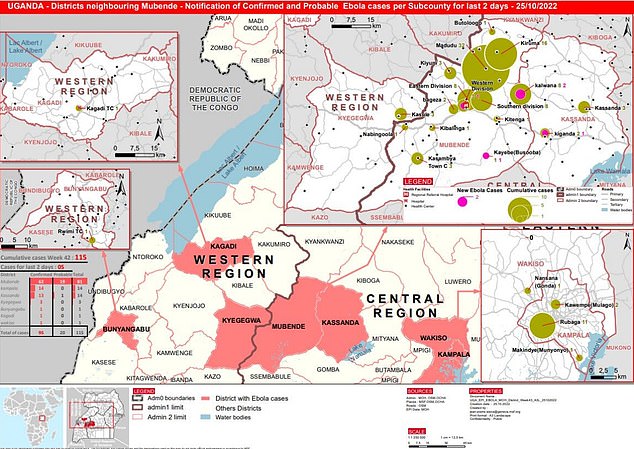 The map shows the parts of Uganda with confirmed cases (pink) and how big the outbreak is in each city (green dots). The majority of cases detected so far have been in Mubende (62), followed by Kassanda (24) and Kampala (17). The cases in the capital have caused alarm as they are spread out across the city — raising fears the virus is spreading undetected

Uganda’s Ebola outbreak began in mid-September and 109 cases have since been confirmed.

Fourteen of the cases were confirmed yesterday alone.

Dozens more are thought to be infected but have gone under the radar due to a lack of testing.

Health chiefs confirmed it is the Sudan strain of the virus that is spreading — which Uganda hasn’t detected since 2012.

There are no licensed vaccines or medicines that work against the strain.

The majority of cases detected so far have been in Mubende (62), located 90 miles (145km) west of Kampala.

The cases in the capital have caused alarm as they are spread out across the city — raising fears the virus is spreading undetected.

On top of these confirmed cases, virus teams are monitoring more than 1,500 close contacts in nine parts of the country.

The first fatality in the current outbreak was a 24-year-old man in Mubende. Among the more recent deaths are a mother and unborn baby over the weekend.

Ahmed Ogwell Ouma, acting director of the Africa Centres for Disease Control and Prevention, told an online briefing today that the outbreak is ‘not getting out of hand’ and ‘is still under control’.

But he admitted it was not possible to share modelling on how the virus is expected to spread.

However, Dr Samuel Oledo, president of the Uganda Medical Association, this week said the ‘earlier we lockdown Kampala the better’, local media claimed.

He reportedly said: ‘Ugandans are still taking it as something so minor. It is catastrophic that, right now, people are not even reporting cases.’

But the Government today said it has ‘no intention at the moment’ of imposing any lockdown in the capital.

The statement echoed comments from President Yoweri Museveni who earlier this month committed to no restrictions and said there was ‘no need for anxiety’.

Princess Anne, who is touring the country with husband Sir Tim Laurence, arrived on Tuesday.

On the first day of her trip, she visited a research unit run by the Medical Research Council, the Uganda Virus Research Institute and the London School of Hygiene and Tropical Medicine.

Princess Anne, who is chancellor of LSHTM, toured the facilities and learnt about the unit’s work to control infections and non-communicable diseases.

The centre is just 27 miles (44km) south of the capital Kampala, where 17 cases have been confirmed.

She then had a dinner with Uganda’s President Yoweri Museveni at the British High Commissioner’s residence in Kampala. 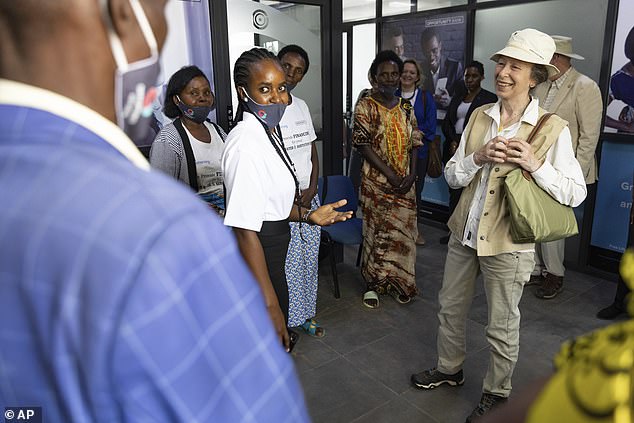 Princess Anne greeting clients of the Opportunity Bank branch that she officially opened in Nakivale refugee settlement, in southwestern Uganda on Wednesday 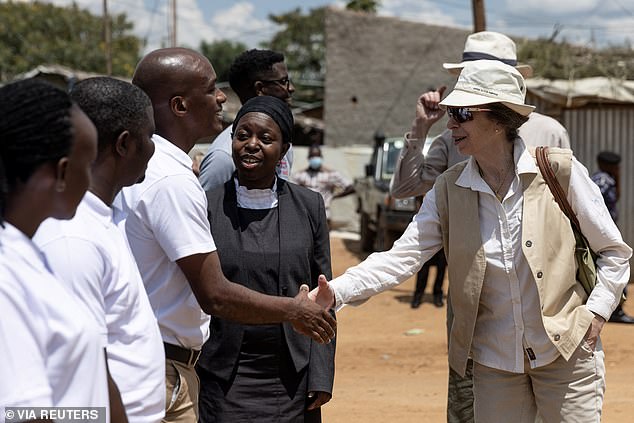 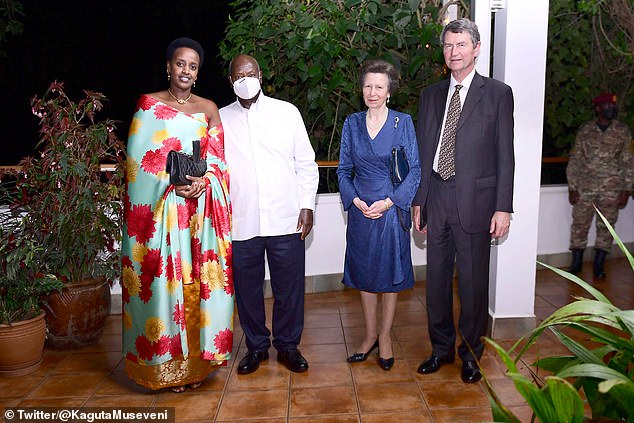 On the second day of her visit, she opened an Opportunity International bank in the Nakivale Refugee Settlement UNHCR Base Camp in the Isingiro District, 124 miles (200km) south of Kyegegwa, which has logged three cases.

It is one of the oldest refugee bases in the country and one of the largest in the world, being home to 120,000 people.

She also unveiled a plaque to mark Opportunity International’s first bank in a refugee settlement and met people who had benefitted from the charity, which offers loans, training and saving help to get people out of poverty.

Princess Anne also visited a youth employment project at the camp to meet refugee entrepreneurs who benefitted from the loans.

Today, she is set to visit the Kyangwali Refugee settlement UNHCR Base Camp before having dinner with charities working in Uganda in Kampala.

Tomorrow, she was scheduled to visit the Salaama School for the Blind to meet students.

But a fire at the school on Tuesday morning killed 11 children, with Princess Anne today expressing shock at the ‘tragic loss of life’.

She will now meet representatives from the charity that supports the school and the families of those who attended it in Kampala.

Ebola is an often-fatal viral haemorrhagic fever named after a river in Democratic Republic of Congo (DRC), where it was discovered in 1976.

The virus is mainly transmitted through exposure to bodily fluids, with the main symptoms being fever, vomiting, bleeding and diarrhoea.

It naturally resides in fruit bats, monkeys and porcupines living in the rainforest, and can also be transmitted through eating uncooked ‘bushmeat’.

Ebola outbreaks are difficult to contain, especially in urban environments.

People who are infected do not become contagious until symptoms appear, which is after an incubation period of between two and 21 days.

Despite concerns over Princess Anne’s visits to Ebola-struck countries, a courtier previously told the Daily Mail that there is ‘no question’ of her cancelling.

And, in 2014, one of her friends said: ‘Anne sees her charity work as vital and will not be put off by something like this.

‘She is used to running the risk of catching illnesses when visiting hospitals and sick children in Africa.’

It comes as football fans attending Qatar for the World Cup, which kicks off next week, have been advised against interacting with camels over fear they will catch a killer virus.

Camel flu, officially known as Middle East respiratory syndrome coronavirus, is a rare but severe respiratory illness that starts with a fever and cough.

But it can develop into pneumonia and breathing difficulties, leading the NHS and experts to advise avoiding camels, which are thought to be the main source of the virus in the Middle East.