The Ebola outbreak that has killed 75 people in the Democratic Republic of Congo since it began four weeks ago has the ‘potential to be the worst ever seen’.

An agency that responds to humanitarian crises fears it will trump the pandemic of 2014, which killed 11,000 and decimated West Africa.

The International Rescue Committee said: ‘Without a swift, concerted and efficient response, this outbreak has the potential to be the worst ever seen.’

Aid workers are battling round-the-clock to contain the outbreak, feared to have struck 111 people in the east of the DRC, on the border with Uganda.

Experimental drugs have been shipped into the area to control the virus, considered to be one of the most lethal pathogens in existence.

A World Health Organization map shows the spread of Ebola across the Democratic Republic of Congo, with dark orange cases highlighting those that have been confirmed and light orange representing ones still being tested

Virologists have repeatedly warned the situation is ‘hard to control’ because cases are in a conflict zone, roamed by armed militias.

And yesterday, Dr Tedros Adhanom, chief of the World Health Organization ramped up the warnings over its potential rapid spread.

Several areas close to the outbreak’s epicentre in the town of Mangina are off-limits to health workers for security reasons.

Dr Tedros Adhanom told news agency Reuters: ‘If one case is hidden in the red zone or an inaccessible area, it’s dangerous. It can just spark a fire, just one case.’

He admitted there has been a steady decline in new cases but warned it was too soon to say the outbreak is stabilising.

No new cases have been diagnosed since Sunday and two infected patients have recovered after being given an experimental drug.

Health authorities are trialling five anti-Ebola medications to try and stop the highly contagious virus in its tracks.

Ebola virus disease, caused by the virus with its namesake, kills around 50 per cent of people it strikes – but there is no proven treatment available. 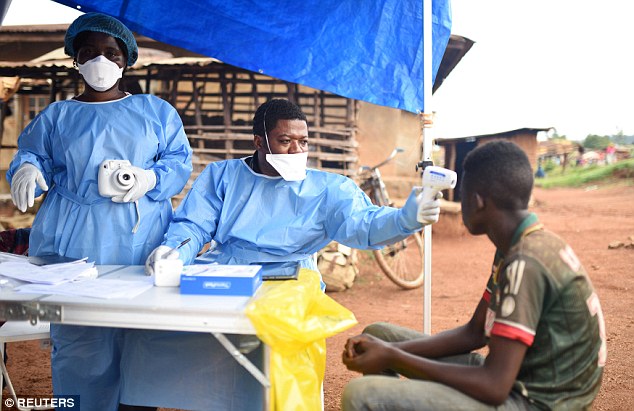 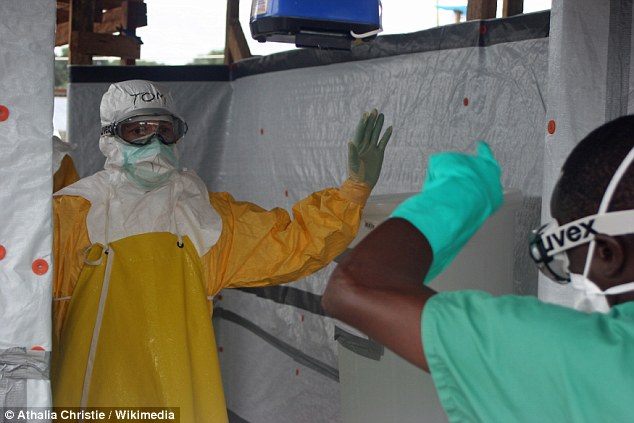 Dr Tom Frieden, director of the US Centers for Disease Control and Prevention is decontaminated by Médecins Sans Frontières/Doctors Without Borders staff after visiting their Ebola treatment unit in North Kivu province

WHO figures released earlier this week show there has been 111 suspected cases of Ebola in the DRC region, of which 83 have been confirmed.

Only 47 deaths have been confirmed, so far, but the remaining fatalities are being investigated in a laboratory, to see if Ebola was to blame.

A total of 15 healthcare workers have been struck down by the outbreak in North Kivu province, of which 14 are confirmed and one has died.

Most of the confirmed cases have been recorded in Mabalako, 18 miles (30km) west of the trading hub of Beni, where 230,000 people live.

But it has since spread to Oicha, an area almost entirely surrounded by militants.

Michelle Gayer, of the IRC, said: ‘With more than fifty armed groups operating in North Kivu, many areas are inaccessible to aid groups due to insecurity.

‘Beni itself was the deadliest territory of the Kivus this month with 33 violent deaths of civilians recorded.

‘If someone contracts Ebola in one of these areas, there is almost no way of knowing and, therefore, no way of cutting the chain of transmission. 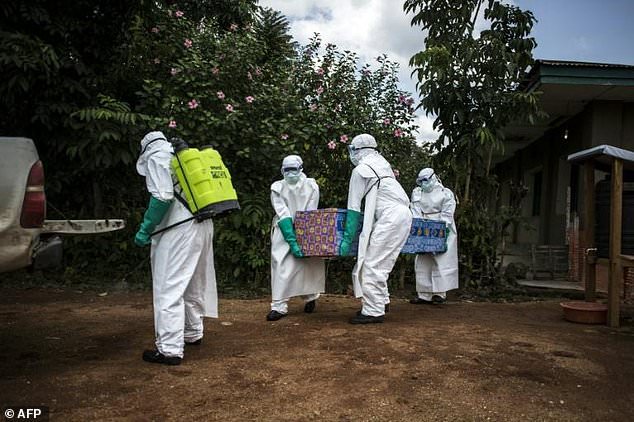 Health workers carry the body of a suspected victim last Wednesday, August 22, in Mangina, a town near Beni

‘The news of two confirmed cases in Oicha is extremely distressing, because the area is almost entirely surrounded by armed militants.’

In a desperate attempt to stem cases, Dr Adhanom last week called for an end to the brutal fighting in the DRC.

The unsafe burial of a 65-year-old Ebola sufferer triggered the latest outbreak in the DRC, according to the World Health Organization (WHO).

After she was buried members of her family began to display symptoms of the virus ‘and seven of them died’.

Genetic analysis has confirmed the virus strain in this latest outbreak is the Zaire strain, the same as the one earlier this summer.

However, Peter Salama, WHO deputy director for emergency preparedness and response, earlier this month revealed it is genetically different.

Vaccinations began two weeks ago, following the success of the jabs in Equateur province.

Some 33 people were feared to have died in the earlier outbreak this summer, which started in the poorly-connected region of Ikoko-Impenge and Bikoro.

It travelled 80 miles (130km) north to Mbandaka, a port city on the river Congo – an essential waterway – with around 1.2 million inhabitants.

There was a concern it would spread to Kinshasa – 364 miles (586km) south, which has an international airport and 12 million people residents.

Dr Derek Gatherer, a virologist from Lancaster University, warned the outbreak earlier this summer was ‘reminiscent’ of the 2014 Ebola pandemic.

All neighbouring countries were alerted about the outbreak of Ebola before it was declared over amid fears it could spread easily.

Officials hailed the use of an experimental vaccine, called rVSV-ZEBOV, in stemming the Ebola outbreak in north west DRC in July.

Barthe Ndjoloko, who oversees the health ministry’s Ebola response, said officials are working to identify those who may be infected.

He revealed the vaccination campaign would focus on healthcare workers and those who have come into contact with confirmed cases.