This week’s solar eclipse, the first to happen in the U.S. in 38 years, excited Americans from all over the country, who, not able to find eclipse glasses, took matters into their own hands and made their own eclipse-watching gear before showing off their crafty skills on social media.

There was just as much talk about the uniqueness of a solar eclipse as there was about the horrifying consequences of looking at it without any protection, with the internet covered with warnings of what the powerful light of the sun can do to the human eye, including blinding.

But not everyone was lucky enough to get their hands on the official eclipse glasses, which have special-purpose solar filters as lenses. New Yorkers braved lines that stretched across entire blocks over the weekend, but, still, the extreme demand left many unable to buy the coveted glasses.

A crafty group: Susan Tibbles and her family viewed the total solar eclipse in Washington state through homemade glasses made of paper plates and welder’s glass 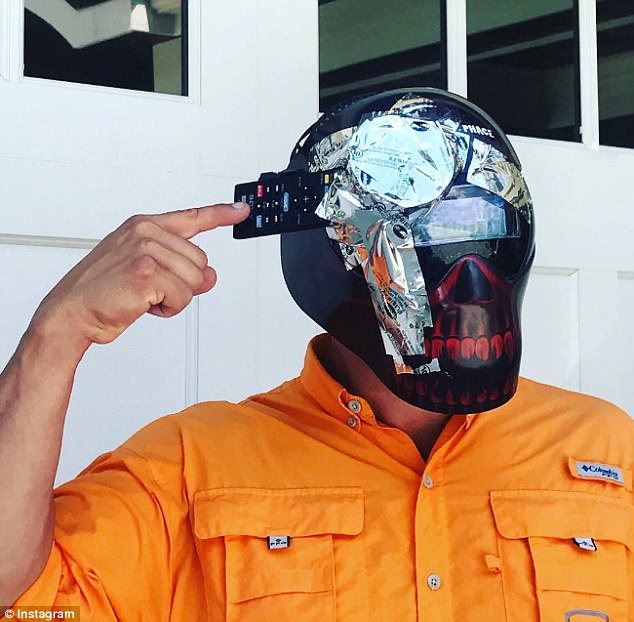 Are you sure that’s safe? This Instagram posted an image of her husband’s improvised eclipse-watching device with the caption: ‘I don’t think those are NASA approved’ 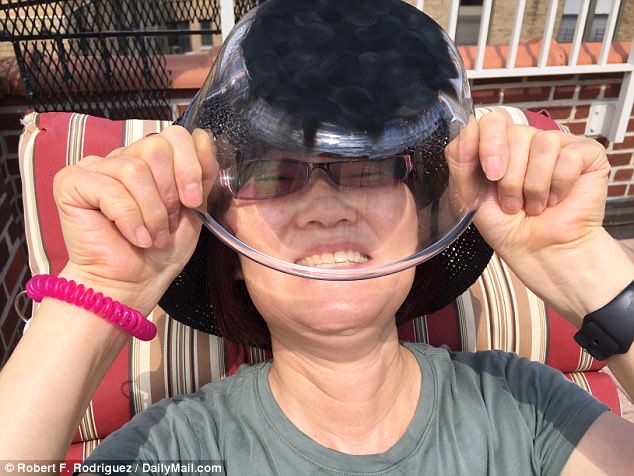 That’s one way of looking at it! Mitsuko Komori, from New York, saw the eclipse through the bottom of a glass bowl that she covered with several layers of matte black paint

Perhaps the most popular was using a cereal box to make a pinhole projector, which anyone with a access to aluminum foil, scissors, tape, a white piece of paper and a pen, could make.

Instagram user _miragia_  took the idea of a projector and went a little further, telling DailyMail.com that she used her memories from childhood to make the crafty device.

‘I remembered a projector I made in middle school,’ she said. ‘I just used a bigger box so my whole family could see the eclipse at the same time’.

She posted an image of her homemade pinhole projector, which had the yesterday’s day marked on the outside, along with the words ‘eclipse’ and an drawing of the moon covering the sun. 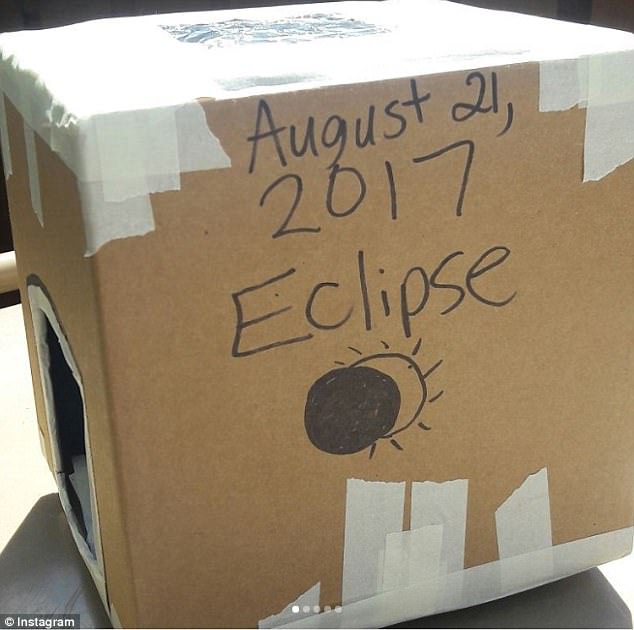 This is why you should pay attention in school: Instagram user _miragia_ built a pinhole projector using her memories from making one in middle school 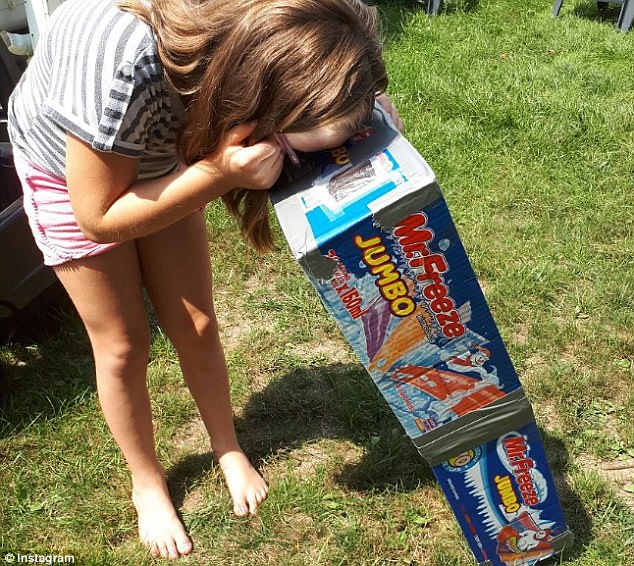 They didn’t need much: The most common homemade eclipse viewers were built with boxes, aluminum foil, scissors, tape, a white piece of paper and a pen 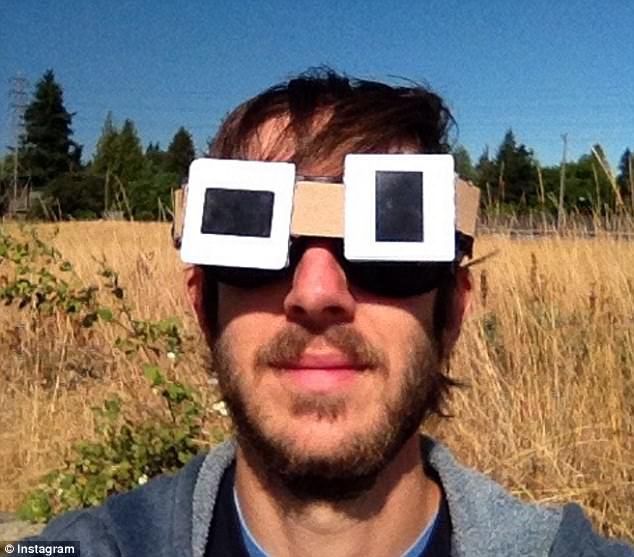 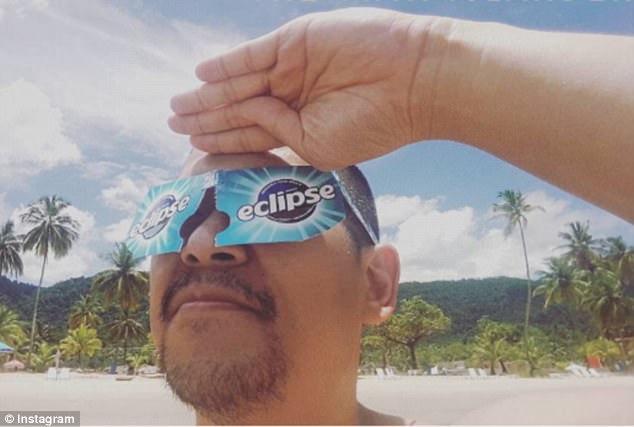 Not THAT eclipse! Many social media users posted images poking fun at the anticipated event with glasses they built with Eclipse gum packs 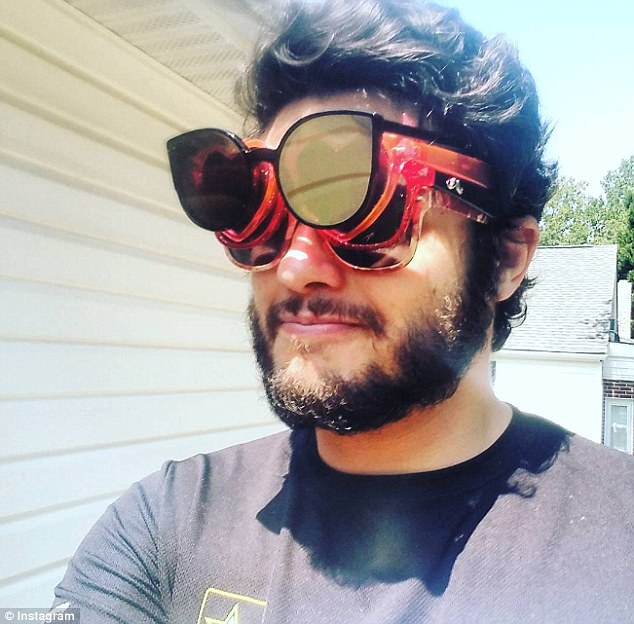 Let’s hope he was joking! This Instagram user just put four different sunglasses over his eyes to make what he said were his homemade eclipse glasses

Mitsuko Komori, on her part, had a whole new way of watching the eclipse: she painted the bottom of a glass bowl with several layers of matte black paint to see the show from the roof of her New York City apartment.

Many simply used welding glasses or a welding helmet to view the spectacular moment. Hopefully they followed NASA’s instructions, which say that only welding glass of shade 12 or higher, which is much darker than the filters used for most welding, is safe to use to look at the sun.

One Instagram user, apactusdio, used old film slides. When a friend commented reminding him that NASA said film isn’t enough to protect the eye from the sun, he said he had put together three film slides together to make his eclipse glasses.

Many showed off glasses they made out of packs of Eclipse gum, and others simply placed a bunch of glasses over their eyes.