Comedian Ed Byrne saved a fan’s life when he jumped offstage mid-performance and performed the Heimlich manoeuvre after spotting her choking on an M&M.

Morgan Wilson, 29, was enjoying the Irish stand-up’s Spoiler Alert gig at the Alhambra Theatre, in Bradford, when she began ‘laughing too much’ while tucking into the nutty snack.

One of the treats became lodged in her throat and panicking, she made a dash for the toilets, only for Byrne to spot her.

Morgan Wilson (pictured, right, at the gig with her friend Alex) said Ed Byrne saved her life when he  jumped offstage mid-performance and performed the Heimlich manoeuvre after spotting her choking on an M&M

He stopped halfway through a joke and leapt to her aid, a move that sales assistant Miss Wilson believes saved her life.

Recalling the terrifying incident, the comedy fan, from Bradford, said: ‘I was laughing too much while I was eating m&ms, during his hysterical act, and looking back it wasn’t the best idea for a comedy gig as I started choking.

‘I was sat in the third row and got up from my seat in a panic. I was planning to make a dash for the ladies room and I’m assuming Ed could see me clearly from the stage. 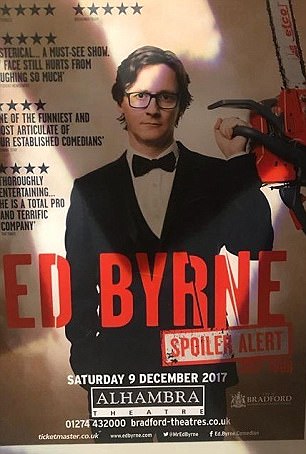 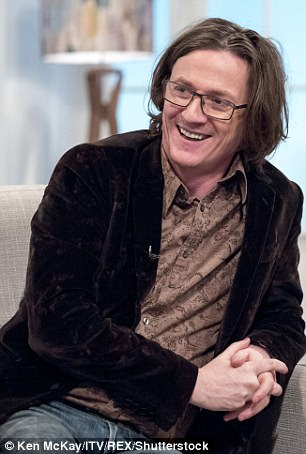 Byrne (pictured, and left a poster for the gig at the Alhambra Theatre) leapt from the stage to come to Miss Morgan’s aid

‘Amidst the chaos in my mind and through the blur of everything I heard Ed stop mid-joke and ask in to the mic “that lady there, is she okay?”

‘My friend told me later on that Ed then jumped down from the stage, abandoning his act.’

Miss Morgan, who was the gig with her flatmate Alex, said that she was within seconds of passing out when Byrne came to her rescue.

Miss Wilson (left, and right with her friend Alex) said that she ‘owes her life’ to Byrne after his heroics

She added: ‘By this point I was seeing spots in my vision and his arms wrapped around me, he saved my life by giving me the Heimlich manoeuvre.

‘I didn’t get to truly thank him due to passing out and being escorted backstage and checked over by St. John’s ambulance but if it weren’t for Ed I believe I would’ve choked to death.

‘I owe my life to him, I’m still in disbelief that he saved me.’