Superstar Ed Sheeran has been using his £40million fortune to build his own property empire by snapping up houses in the Suffolk village where he lives.

The hitmaker, who announced his engagement to sweetheart Cherry Seaborn last weekend, has bought four homes next door to each other to create his own country estate.

MailOnline revealed exclusively yesterday how Sheeran, 26, is building an underground ‘man cave’ featuring a music room and cinema beneath the grounds of his main farmhouse.

Is he buying the whole road? Newly-engaged Ed Sheeran has purchased two more houses next to his country mansion for £1.5m as locals dub the properties ‘Sheeranville’… (to go with his man cave, pub and giant treehouse)

But Land Registry records disclosed on Tuesday that the singer and songwriter has also bought three other neighbouring properties.

Sheeran already has a giant treehouse, a trendy pod and a hot tub installed in his main garden, along with a covered swimming pool and a barn converted into his own pub complete with urinals and a choice of beer.

Locals have now dubbed the area where he lives as ‘Sheeran-ville’ because he owns so much property there.

One villager, who asked not to be named, said: ‘Ed is a super guy and really friendly. He is just a down to earth Suffolk boy at heart – so who can blame him for wanting to settle down here? It is a lovely part of the world.

‘He has bought all the properties next door. I guess it means that there is nobody to complain if he plays his music too loudly.’

Sheeran has a team of builders who have been busy renovating his houses and outbuildings which overlook open fields and rambling countryside.

His clutch of homes are all on the outskirts of a village in Suffolk, where he grew up with his family. 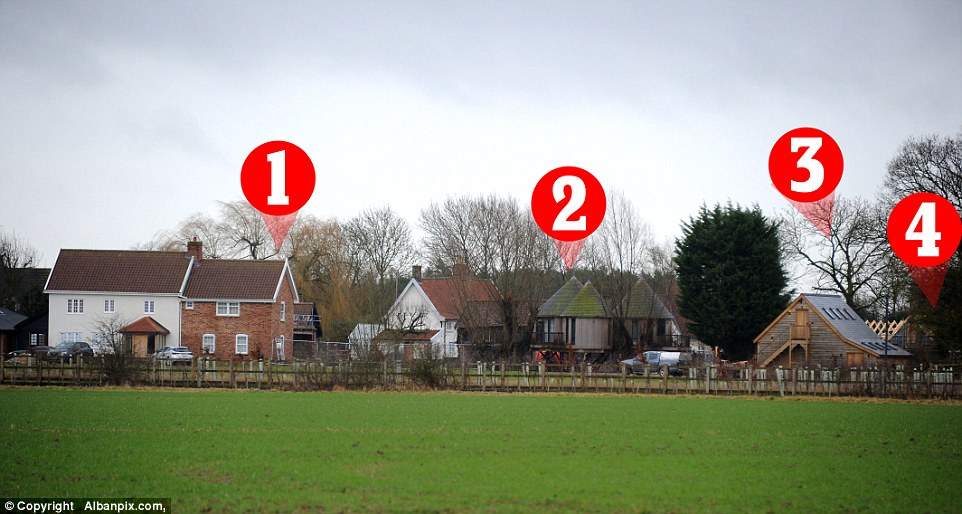 Sheeran first met Cherry, 25, at school there and he has often spoken of his love for Suffolk and his desire to put down roots in the rural county.

Land Registry records disclose that he first bought his large modern detached farmhouse and surrounding land for £895,000 in June 2012 (tab 1)

Sheeran then started his programme of extensive improvement at his house. His most striking addition was his tree house complex, (also tab 2) made up of three interconnected timber huts with conical roofs on a raised platform.

He also added the 26ft by 26ft ‘pod’ in his garden which has been described by locals as ‘a Hobbit Hole’.

The singer seemed to make himself at home so much that he bought the four bedroom detached house in front of his farmhouse in September 2016. (tabs 3 and 4)

The former owner of the house who is now living in London refused to comment when contacted by MailOnline on Tuesday. She would only say: ‘I don’t want to say anything.’

The title deeds for the house name Sheeran as the current owner and give his address as being that of his specialist music and entertainment accountants Hardwick & Morris in Great Portland Street, London, and care of his lawyers in Shrewsbury, Shropshire.

Sheeran splashed out again on his fourth purchase as recently as last October when he bought the bungalow on the other side of his driveway for £525,000. 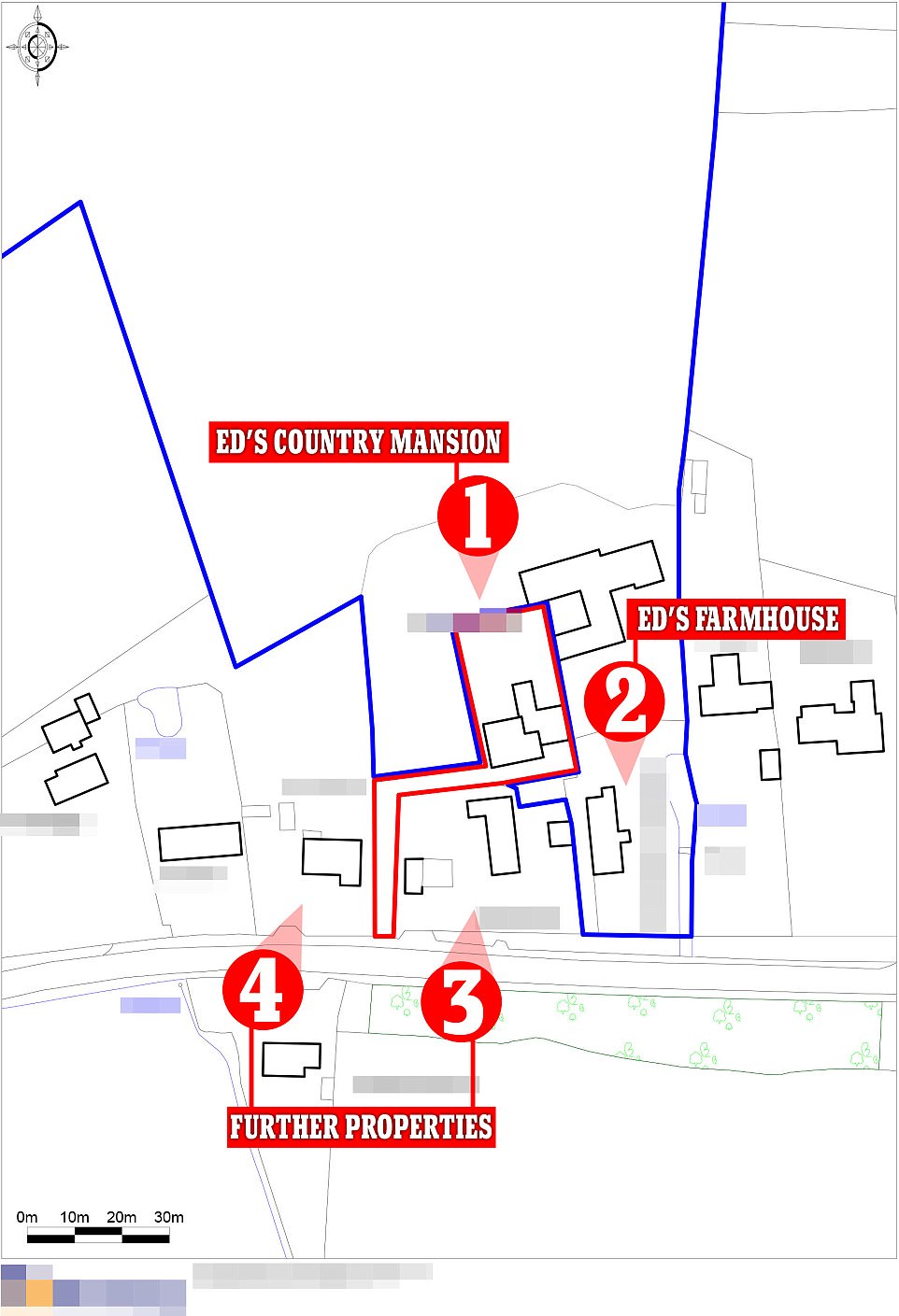 Pictured from above: It comes as no surprise then that locals have dubbed Ed’s collection of properties ‘Sheeran-ville’ as he appears to be buying up the whole road

Teams of builders appeared to be hard at work on his properties this week and a digger was visible in the grounds of his main farmhouse, although most of his land is hidden by high fencing and gates.

Planning documents reveal how Sheeran’s latest project is to have two underground entertainment rooms – a cinema and music room – directly connected to his main house by a six foot wide tunnel.

Another set of stairs will link the underground zone to the barn which he has converted into his own private pub. Plans show that his cinema will measure around 35ft by 20ft and his music room will be 25ft by 18ft.

The eight foot high rooms and an adjoining toilet will partly extend under the singer’s existing barn and are accessed by a tunnel entrance from a new orangery extension on his farmhouse. 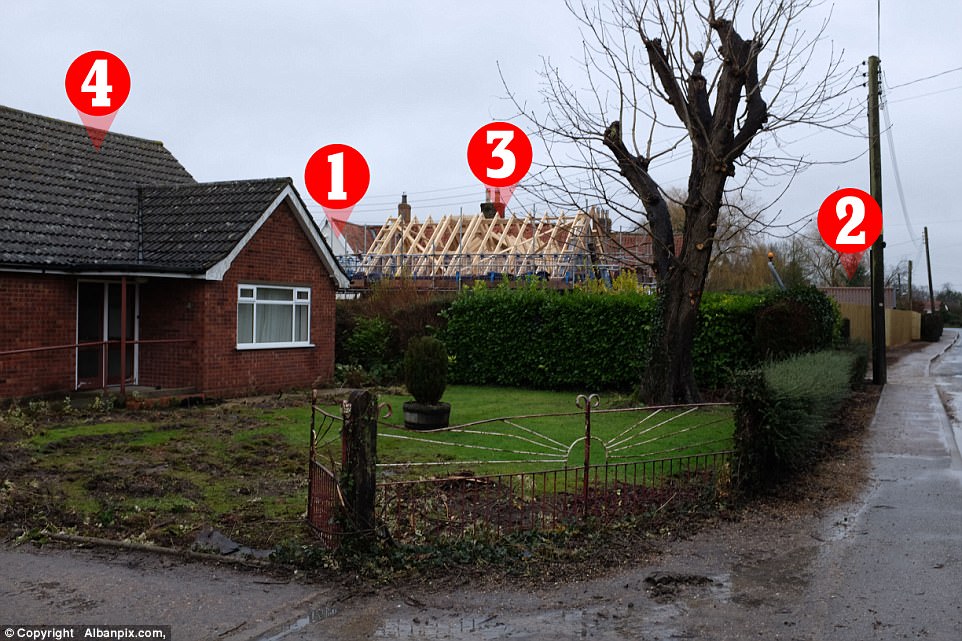 Hard at work: Teams of builders appeared to be hard at work on his properties this week and a digger was visible in the grounds of his main farmhouse, although most of his land (around the back) is hidden by high fencing and gates (Pictured (1)  Ed’s £895,000 country mansion (2) His grade II listed farmhouse (3) (4) two further properties) 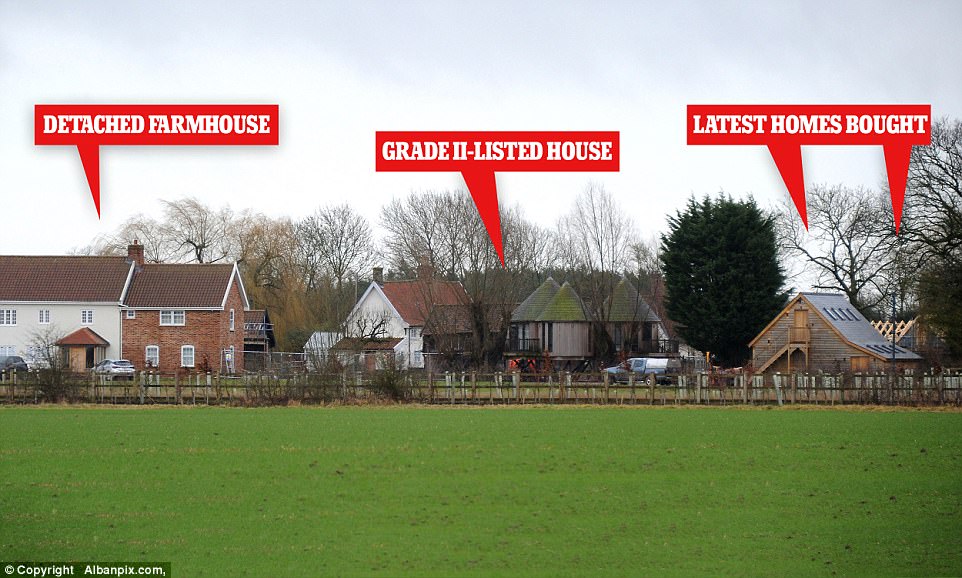 Plans for the barn show it has a bar area with a mezzanine floor and even a pair of mens’ urinals, a normal WC and two hand basins.

Lego House hitmaker Sheeran was granted listed building consent by Suffolk Coastal District Council for the plans last September. Before he got consent, he had to commission an ‘ecological enhancement’ report to ensure that his building plans would not affect bats living in the area.

The specialist report recommended that he plant more native species hedgerows for bats to forage in, build boxes for them to nest in and erect a trellis with plants to encourage more insects as a food source for them.

Changes to exterior lighting to avoid dazzling bats was also recommended in the report. Sheeran also won a planning battle last year to build a new cartlodge garage with space for four vehicles and a storeroom upstairs.

Council officials had originally refused him permission for the outbuilding after ruling that it would be ‘an incongruous feature’ in a ‘peaceful rural setting’.

They also claimed that the grey slate roofed cartlodge would cause ‘considerable harm’ and ‘present a creeping domestication’ to the surrounding area.

But Sheeran appealed to the Government’s Planning Inspectorate and got the ruling overturned.

The singer first revealed that he had his own pub at his country home last January in an interview with Zane Lowe for Beats 1 / Apple Music Radio.

When asked about his home, he said: ‘Yeah it’s getting there I’ve built a pub. Like I had a bar before, a bar where you could pour beers but now this has like a selection of beers which is cool.

‘So basically there’s an underground tunnel to get there that you can close off. So if I have a party everyone goes in the pub and no one can get in the house so you get no one, raiding the cupboards or smashing anything. You have to go underground to get to the pub.’ 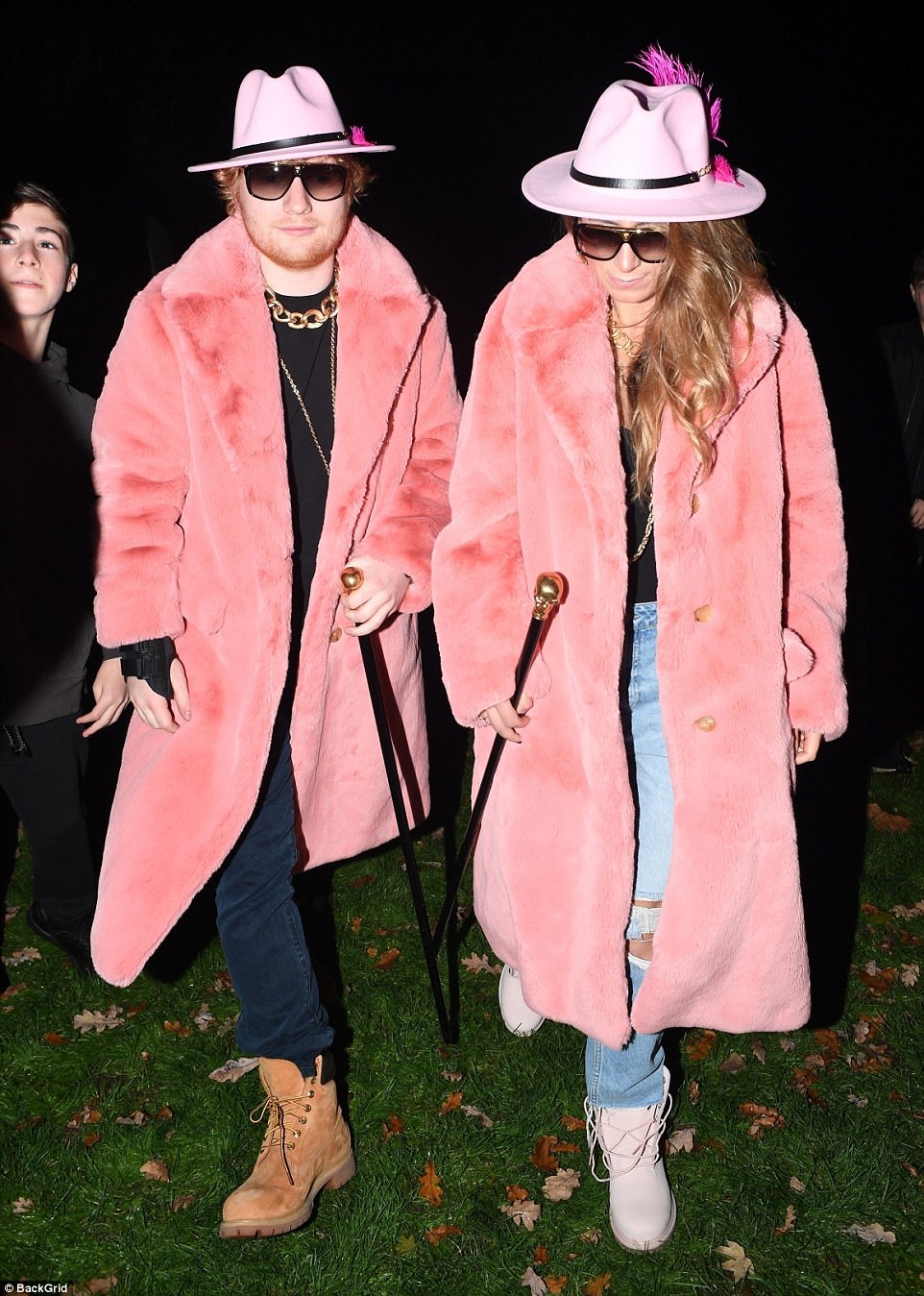 Love: Ed and Cherry are believed to have first met in school but they have been dating as adults since 2015