This is the season to be jolly — of goodwill and glad tidings. But that’s clearly not the case for one eminent member of the aristocracy.

For him, an Earl, it’s evidently just another opportunity to behave in a manner beneath contempt, as he demonstrated in an astonishing and repulsive display.

The incident occurred at a private society party, held in London, earlier this month.

The hosts, a married couple, looked after their guests with what, I’m assured, is characteristic generosity, but no one — the Earl included — took too much advantage of their hospitality, still less appeared the worse for wear.

An earl spat in the face of a young staff member in a row over coats, Richard Eden (pictured) reveals

However, as guests were leaving at the end of the evening — ‘It wasn’t very late,’ I’m told, ‘midnight, maybe a bit earlier’ — the Earl’s mood changed.

His hosts had ensured that paid helpers were ready to find and return coats, hats and scarves to guests.

‘All the coats were on a rack,’ I’m told. ‘There were two girls — one a sweet South American — helping to find them and give them back.’

As chance would have it, she was the one who responded to the Earl’s request for his coat, but had trouble finding it. His lordship was unamused. He began raising his voice. ‘He said: ‘Why haven’t the coats got names on them?’ Just got more and more wound up, in front of this poor girl, who was saying: ‘I’m so sorry, I’m just trying to find your coat.’ ‘

But her apologies failed to placate the peer, who, instead, responded in abhorrent fashion.

‘He spat in her face — in front of a whole load of people. The most revolting thing,’ says my source.

It left the young helper distressed and disgusted.

Friends hoped that she would report the matter to the police. ‘What he did is assault,’ one of them points out.

But justice appears unlikely to be done. ‘She works for the family who gave the party and fears she’ll lose her job.’

Time, self-evidently, that the family spat the Earl out for good.

Just over a year since I reported that England rugby union star Sam Underhill had got engaged to girlfriend Josie Jennings: they’ve now made things official.

The 26-year-old Bath flanker married the Bath University graduate in a low-key ceremony in Somerset attended by close friends and family.

The happy couple met at uni.

Last year Josie described Sam’s proposal, complete with diamond ring, as the ‘Best weekend ever, could not be happier’.

However, she might have to make do with a very whistlestop honeymoon. Bath are back in action this afternoon with a game away at Exeter.

There is no mystery over who Dame Vivienne Westwood’s granddaughter Cora Corre will be kissing under the mistletoe this Christmas.

For I hear the model, 25, has found love with former model Riccardo Ambrosio, who is now a manager at Soho House in London.

Cora shared this loved-up picture of her and Ambrosio cosying up to one another at a festive do, in which she captioned ‘Mr & Mrs Scrooge’. Hopefully, Riccardo and Cora’s relationship will have met the approval of her parents, Agent Provocateur co-founders Serena Rees and Joe Corre, as well as queen of punk Dame Viv. The 81-year-old fashion designer once voiced disappointment that her granddaughter had chosen to go skiing rather than model for her. 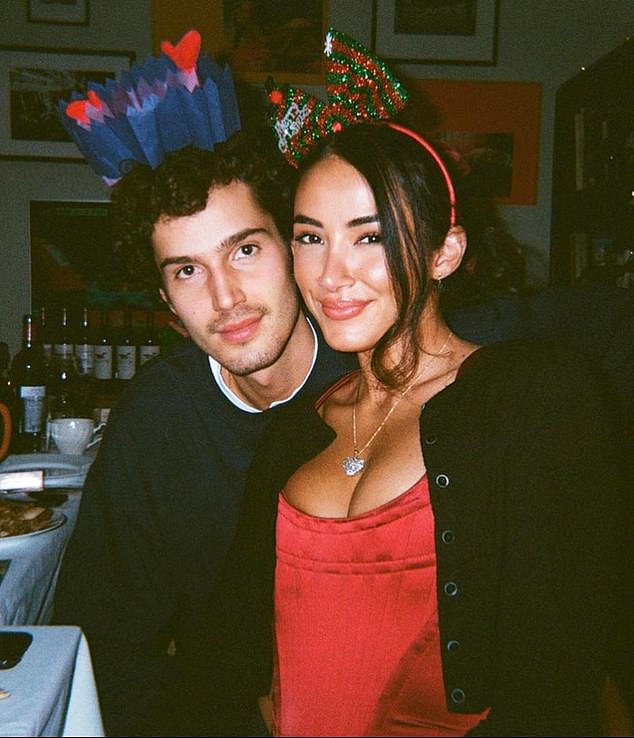 She’s never been one to be shy of making a bold fashion statement, but dare I say that heiress Ivy Getty’s latest ensemble reminds me of a glamorous version of Dr. Seuss’s fictional character The Grinch.

However, in reality the model was a far cry from the Christmas-loathing creature, and full of the festive spirit while celebrating her 28th birthday in New York.

The great-granddaughter of Jean Paul Getty, the oil tycoon who was once the world’s richest man, donned a lime green fur hat, which she paired with a crop top and sequinned shorts.

The heiress is married to tech whizz Toby Engel, 29, son of former Coronation Street actress Cheryl Prime, but Ivy tells me she’s never even watched an episode of the ITV soap.

‘I haven’t seen it yet, which is very embarrassing,’ she says. ‘I should watch it. I only watch MasterChef and the news, which is so depressing.’

The great-granddaughter of Jean Paul Getty, the oil tycoon who was once the world’s richest man, donned a lime green fur hat, which she paired with a crop top and sequinned shorts 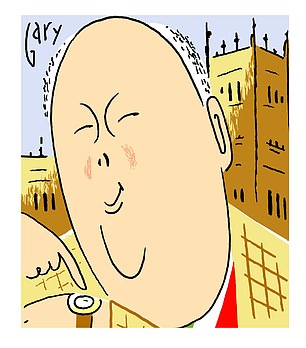 Downton Abbey creator Julian Fellowes might have to reconsider his grand plan for the show.

Having previously stated that so long as people still want to see new episodes he’ll ‘give it to them’, he’s now hinted it might not last much longer. ‘I live in the present as far as my career is concerned,’ Lord Fellowes, 73, tells me of the period drama’s future.

‘But whatever I say now, I’ll probably be saying something that ends up being completely wrong in five years. When the time comes that people don’t want it then I’ll move on to something else.’

A world without Downton? What would the Earl of Grantham say?

There’s no slouching in Swaledale — certainly not where the nine-strong brood of Yorkshire Shepherdess Amanda Owen are concerned. Though Amanda, now estranged from husband Clive, is currently off our screens, her second son Reuben is not only starring with his dad in Channel 5’s spin-off Beyond The Yorkshire Farm but has established his own business, Reuben Owen Limited, specialising in ‘environmental and drainage work’. There’s no question of who’s boss either; Reuben is sole director and owns at least 75 per cent of the company’s shares.

He only turned 19 last month. So it’s not just the sheep that grow up fast in the Dales.

I got you babe: Cher to get the Mamma Mia! treatment

She turned Mamma Mia! the Musical into a global supertrouper that has grossed billions from the films and stage shows alike.

Now producer Judy Craymer, 65, is set to lay all her love on iconic songstress Cher, as she is working on a new biopic about the singer’s life. But Judy’s keeping mum on who will play the star: ‘There are all kinds of thoughts on who will play Cher, but she has approval. I think she’s really looking forward to it, but she is daunted about seeing her life on screen. I think she would very much like a biopic and I just think it will be a gift to an audience — her life, her story and performances and her funny ways. She has great zest.’ 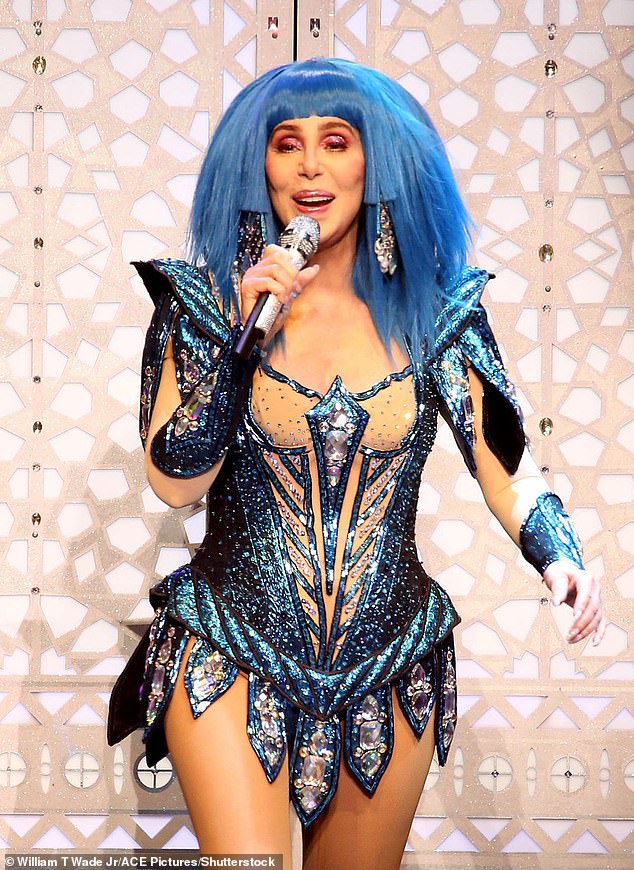 Now producer Judy Craymer, 65, is set to lay all her love on iconic songstress Cher, as she is working on a new biopic about the singer’s life

Who says that monarchy is an outdated concept and that the Royal Family should be swept away? Not Labour councillor Hamza Taouzzale, 23, the youngest-ever Lord Mayor of Westminster who came to office when the Conservatives lost control of the borough in local elections last May. ‘I’ve appeared in the Prince and Princess of Wales’ video for the #TogetherAtChristmas carol service,’ says Taouzzale, who is also Westminster’s first Muslim Lord Mayor. ‘It is just the icing on the cake. It all feels like a dream.’

As sons of the late Sir Terry Wogan, they were hoping for a slice of the culinary big time when they opened a branch of their pizza restaurant franchise at the site of the old BBC studios, where their late father was once king of the airwaves.

But now mystery surrounds the future of Homeslice Pizza, launched by brothers Mark, 52, and Alan Wogan, 55, in 2013.

With its White City location having shut its doors, the branch has now also been removed from the Homeslice website.

This means the company, which started off with six London-based branches, now has just three left. The White City branch opened in 2018 at the site of the old BBC studios, which had been the spiritual home of Sir Terry, who was one of the BBC’s best loved broadcasters, before he died aged 77 in 2016.

Is Noel Gallagher looking back on his past shenanigans with singer brother Liam with a little less anger?

The Oasis songwriter believes he and his obstreperous sibling should have taken a break at the height of their fame, which would have likely prolonged their career as a band.

‘If I could go back, I would have taken five years out at that point and just let the whole thing land and then start again,’ he says. ‘But you’ve got to be cool to think like that and we weren’t cool, we were just guys from a council estate.’ 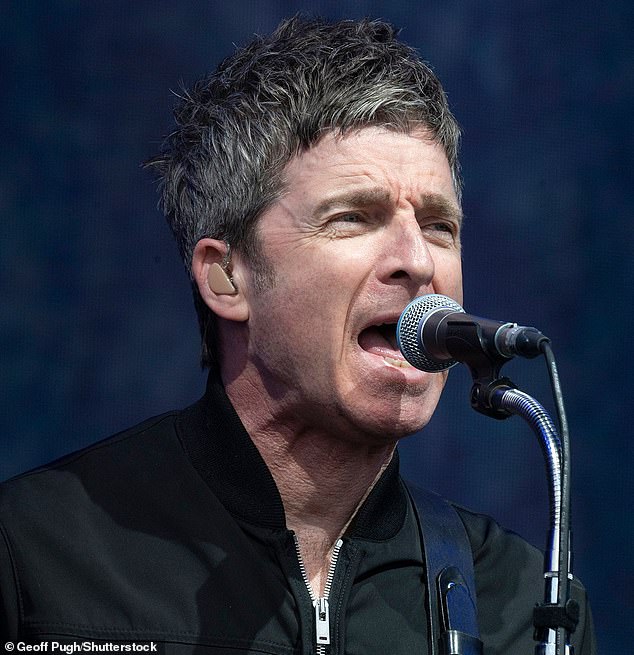 Noel Gallagher believes he and his obstreperous sibling should have taken a break at the height of their fame, which would have likely prolonged their career as a band

Given that ‘recollections may vary’, as the Queen memorably reflected, the King might have been minded to ensure every sip and smile were recorded at his Sandringham Christmas party on Thursday. If so, it was a temptation he resisted. ‘It was gently but definitely pointed out that no photographs were to be taken,’ I’m told. ‘Telephones were left in cars.’

Rachel Johnson has taken a potshot at Meghan Markle by introducing a new preface to her weekly Difficult Women podcast.

At the start of each episode, Boris’s 57-year-old younger sister now informs listeners: ‘Warning, this is not a Meghan Markle-type podcast. Not here, not now. We take difficult as a compliment not an insult, and [this is] where women are the heroines of their own lives and not the victims.’ Miaow.