When it was disclosed last week that the Queen was having ‘sleepless nights’ over Prince William flying his wife and their children around in a helicopter, there was bemusement as to why she had become so worried.

Now, however, a source close to the monarch has revealed the secret reason for her fear: she’s still haunted by a helicopter accident that killed the Captain of the Queen’s Flight and three others.

‘It put her off completely,’ the source tells me. ‘That’s why she’s so worried about William and his family.’

The source says the Queen, who is at Windsor Castle, will be ‘having words’ with the Duke of Cambridge when he returns from Norfolk, where he’s spending Christmas with Catherine and their three children. 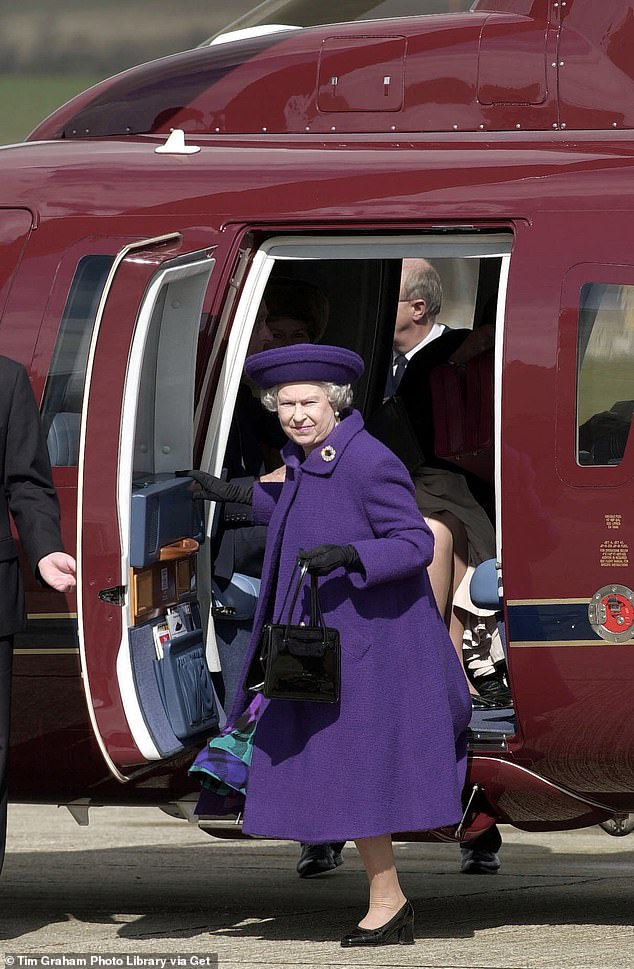 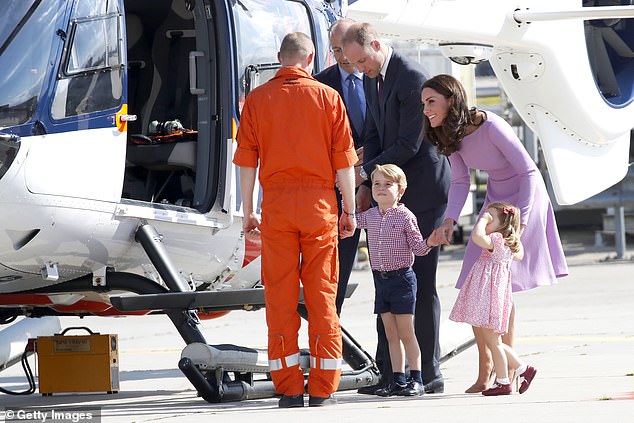 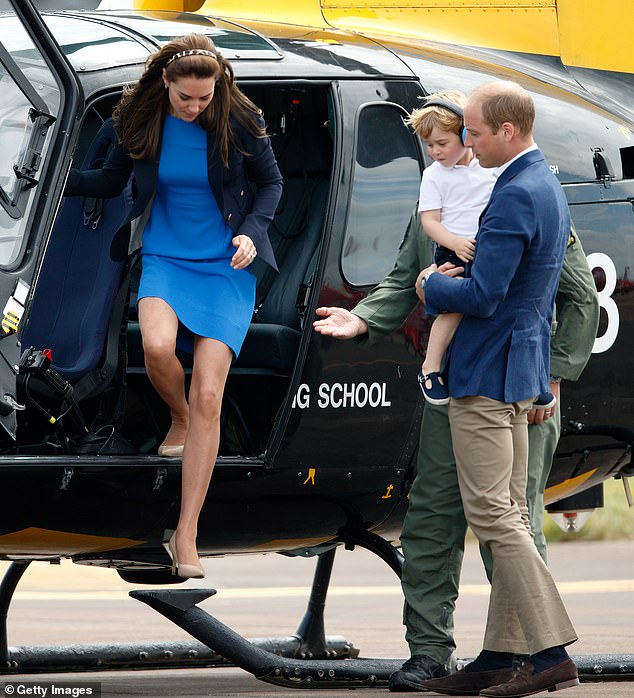 Prince William, Duke of Cambridge & Prince George of Cambridge look on as Catherine, Duchess of Cambridge disembarks a Squirrel helicopter as they visit the Royal International Air Tattoo at RAF Fairford

It was in December 1967 that the Captain of the Queen’s Flight, Air Commodore John Blount, was killed when he was flying in a Westland Whirlwind that crashed near Newbury, Berkshire. Three other members of the Flight were killed.

An inquest blamed metal fatigue in the gearbox. No royal was on board but Prince Philip had recently been flying the same aircraft. The Queen was so upset that she refused to contemplate rotary air travel altogether.

As a result, she did not set foot in a helicopter until, finally, she had no choice.

During her 1977 Silver Jubilee, as my colleague Robert Hardman revealed in his book Our Queen, she was determined to visit all parts of her kingdom.

Her ministers told her that if she wanted to visit Northern Ireland, the only safe way was in a chopper. She obliged, but with a heavy heart.

And to this day, she dislikes them, especially in winter, and will not board one after dark.

Blount was from a distinguished RAF family. But by the time his relation, James, was choosing a career, he opted for the Army, prior to a career in pop music — when he dropped the ‘o’ from the family name.

Kate a singing star? Wouldn’t it be loverly!

The Duchess of Cambridge’s impressive piano playing alongside rock singer Tom Walker at Westminster Abbey last week has left royal watchers wondering if we might soon hear her sing as well.

They’ve been sharing a video of the future Queen singing Wouldn’t It Be Loverly? during her prep school’s production of the musical My Fair Lady. 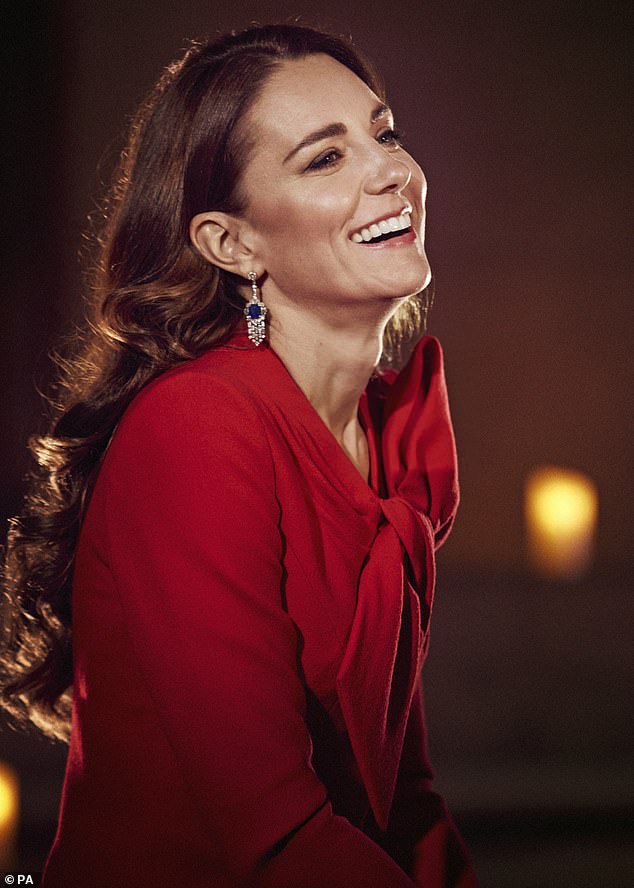 Aged 11 and wearing a shawl on stage at St Andrew’s School in Pangbourne, Berkshire, she can be heard putting on a Cockney accent as the flower girl Eliza Doolittle who dreams of a better life and sings about someone ‘warm and tender as he can be, who takes good care of me’.

Her leading man Andrew Alexander, who went on to play Downton Abbey’s Sir John Bullock, once recalled: ‘Kate played the role with passion and a steely conviction.

‘I always like to think that, although I’ll never be king, I was at least her first prince.’

A sparkling surprise for Sienna’s sis

The divorced fashion designer, who turns 43 today, was presented with a sparkler and a proposal by boyfriend James Whewell, 40-year-old heir to the 800-acre Wyresdale Park Estate in Lancashire.

‘I didn’t think this Christmas could get any more special,’ she says.

‘Yet, in classic magic Jim fashion, I received the best gift I could ever have wished for: the promise of a life filled with love and joy and this man.’

She started going out with Whewell last summer following the collapse of her 15-year marriage to Nick Skinner, a bushcraft teacher from Devon, with whom she has three children.

The Duke of Wellington is mourning his niece, who died in the run-up to Christmas, the day before her 15th birthday.

Skye Wellesley was diagnosed aged one with the genetic disorder, Rett Syndrome. Her sister, Eleanor, 25, says: ‘Our lives simply won’t be the same. I will treasure all of our memories and keep them forever safe. We miss you dearly.’

Zara Tindall had talked about how ‘excited’ she was to take her her nine-month-old son, Lucas, to Australia for the first time.

But I hear the Queen’s granddaughter has now cancelled their trip to the Magic Millions equestrian event on the Gold Coast next month, because of the uncertainty surrounding the pandemic.

‘Zara and I have made the difficult decision to postpone our trip until January 2023,’ confirms her husband, the former England rugby captain Mike Tindall. 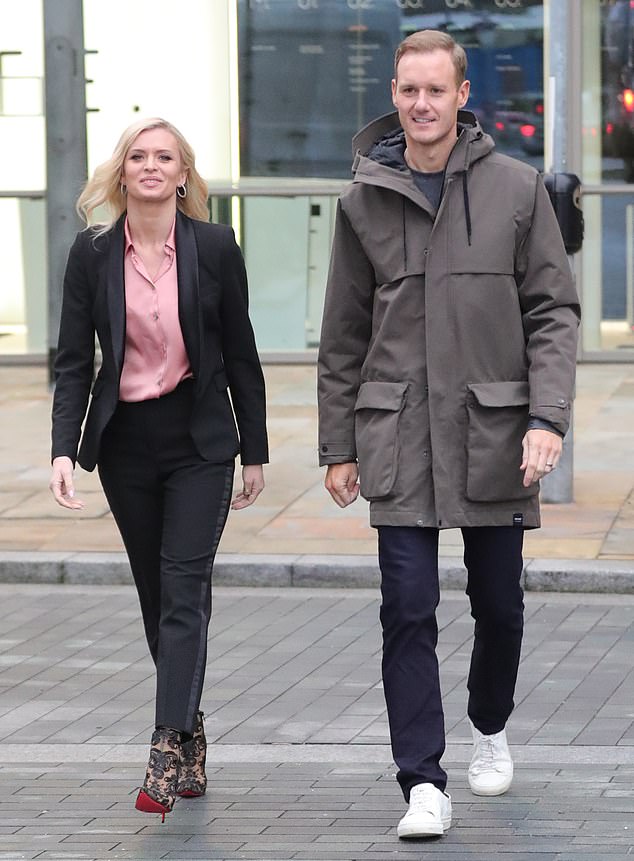 Although he’s no longer cha-cha-cha’-ing on the Strictly dance floor, BBC star Dan Walker remains eager to show his gratitude to his professional partner, Nadiya Bychkova.

‘Lots of people have asked me if I got Nadiya a present for the end of Strictly and/or Christmas,’ says the married father-of-three. ‘The answer is “yes”.’

The broadcaster, 44, shared this photo of a beaming Nadiya, 33, with the personalised painting he commissioned from Sheffield artist Alan Pennington. Let’s hope he bought wife Sarah something equally thoughtful.