She spent five years bringing up four children single-handed while simultaneously fighting to free her husband from hell-hole African prisons.

But now the vivacious Amanda Mann faces a battle on the home front.

Not against her husband, Old Etonian former SAS officer Simon Mann, leader of the failed ‘Wonga Coup’ against President Obiang of Equatorial Guinea — but her stepmother, Sheila Freedman.

I can disclose that Mrs Freedman — who married Amanda’s father, Maurice, in 1977 and remained with him until his death in 2017 — has launched a High Court claim contesting his will.

Amanda and her sister, Juliette, are the key beneficiaries.

Despite an income of £4,000 a month from a pension fund, Sheila, 86, seeks ‘further provision’ to ‘meet her needs’, stating that she had an ‘extremely comfortable lifestyle’ during her marriage and, now in poor health, requires live-in care. 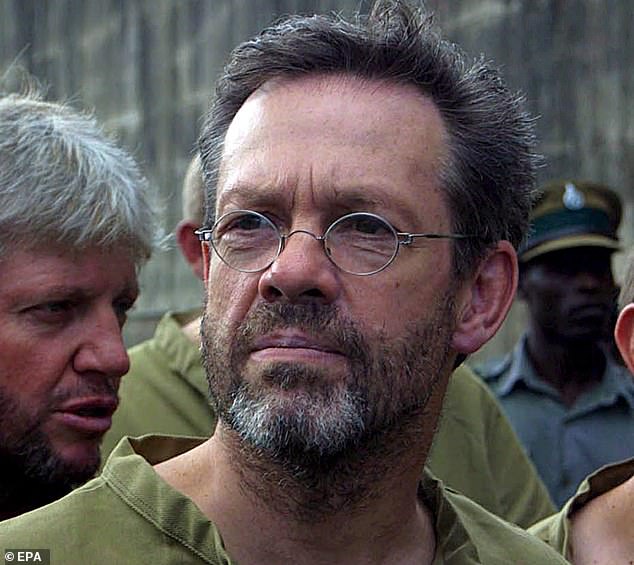 The Old Etonian is the former SAS officer Simon Mann, leader of the failed ‘Wonga Coup’ against President Obiang of Equatorial Guinea

Her claim says that Maurice’s assets totalled more than £2million in 2005, yet the net value declared in his will was only £258,505.

‘Serious questions arise,’ say court documents, ‘about what happened’ to Maurice’s fortune in the intervening years.

As a captain in the Welsh Guards, Mark Dyer survived a number of tours of duty in Northern Ireland during the Troubles.

He has, however, been left seriously wounded after attempting a spot of gardening.

Prince Harry’s ‘mentor’ is recovering after breaking eight ribs, shattering his shoulder, and puncturing a lung and his diaphragm. 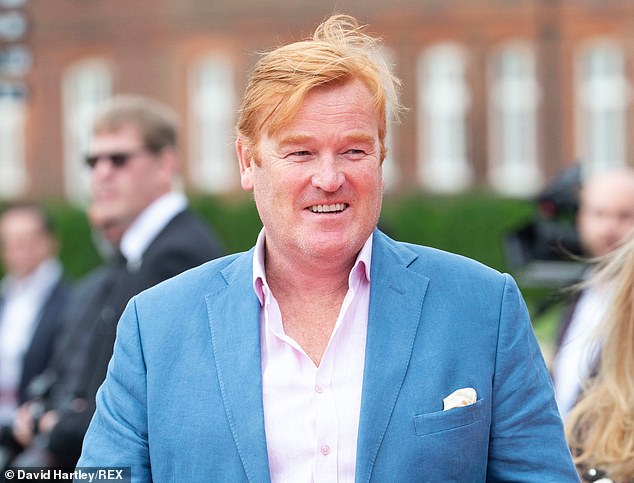 Prince Harry’s ‘mentor’ Mark Dyer is recovering after breaking eight ribs, shattering his shoulder, and puncturing a lung and his diaphragm

‘This was all from falling off a ladder while cutting a branch,’ reveals his friend, the television presenter Natalie Pinkham.

Dyer, 53, is a former equerry to Prince Charles. His son, Jasper, is Harry’s godson and was a pageboy at his wedding.

Dyer was allowed out of hospital last weekend to enjoy some sun on his cheeks and time with his wife, Amanda.

Natalie adds: ‘Mark has served on the frontline and yet has never been this sore. No more ladders — he learnt the hard way.’

Reaching a milestone birthday is a chance to rejoice, but party-loving interior designer Nicky Haslam refuses to thow a party himself for his 80th next Friday.

‘I think it is common to celebrate one’s birthday,’ the style arbiter tells me at the launch of Douglas Murray’s book, The Madness Of Crowds. ‘Maybe when you are 18 — not when you are 80.’

It’s a shame — Haslam has enjoyed some memorable birthday bashes in the past.

His 40th was attended by celebrated socialite Lady Diana Cooper and also introduced a young Rupert Everett, dressed as a Masai warrior and wearing nothing but a thong.

Recalling the actor’s garb, Haslam remarks: ‘That was a wonderful outfit.’

Instead, Haslam’s colourful life will be celebrated at Bonhams in November when he puts the contents of his Jacobean-revival Hampshire home under the hammer.

Treasures going up for auction include his Cecil Beaton ink portrait of Coco Chanel (£6,000) and his Regency Gothic Revival garden seats (£1,800 for the pair).