When the Queen banned Prince Harry and Meghan from using the term ‘royal’ after they quit official duties, the couple posted an extraordinary statement on their website insisting they still had the right to the word.

Now, however, Buckingham Palace has made clear that it means business. I can disclose that courtiers are taking highly unusual action to stop a long-serving butler using the epithet ‘royal’.

A former butler of Prince Charles, Grant Harrold (pictured), has been ordered not to use the word ‘royal’ by Buckingham Palace as he tries to set up a ‘Royal School of Etiquette’

However, the Palace has now formally objected to his use of the term. ‘It’s a real David and Goliath battle,’ one of Harrold’s friends tells me.

However, a royal source tells me that action was necessary. ‘It’s important the Royal Household protects its brand,’ he says. ‘We could hardly tell the Duke of Sussex he couldn’t use the term ‘royal’ but allow a former staff member to do so. 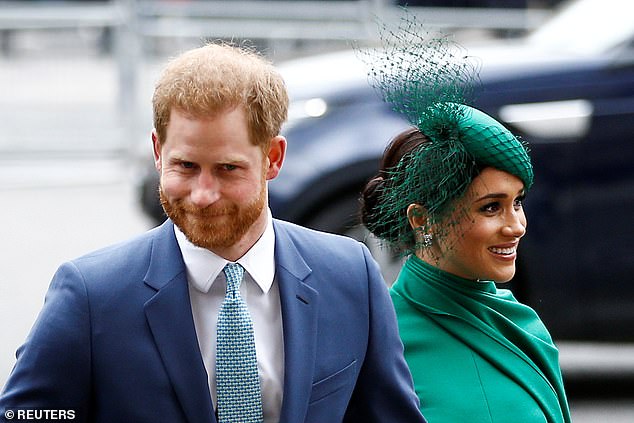 ‘The Household was prepared to let him style himself “the royal butler”, but what happened is he tried to trademark the term. That was a step too far.’

The Lord Chamberlain’s office at Buckingham Palace formally lodged an objection at the Intellectual Property Office, using the Queen’s lawyers, Farrer & Co. A video hearing is due to be held this month.

Harrold tells me has been advised not to comment. He has become a regular on television advising on questions of etiquette since leaving the Royal Household in 2011 after seven years. As well as working for Prince Charles, he served members of the Royal Family from the Queen to the Duchess of Cambridge.

So convincing as earl’s daughter Lady Edith in Downton Abbey, Laura Carmichael is fed up with fans assuming she’s an aristocrat. 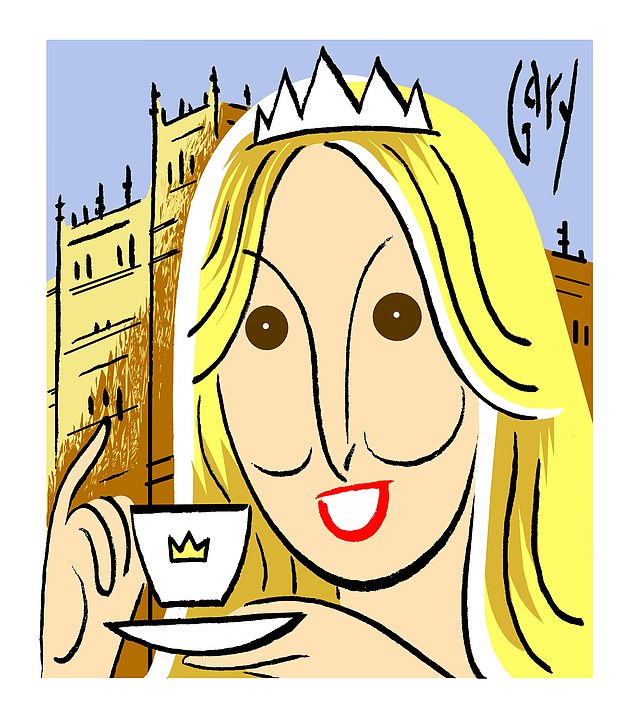 Downton Abbey star Laura Carmichael is fed up with fans assuming she’s an aristocrat, claiming she is boringly middle-class

The actress, who describes herself as a ‘boringly middle-class girl from Southampton’, reveals: ‘Everyone thinks that I’m very posh and somehow related to the Royal Family.’

She’s been in Australia filming hit new BBC1 thriller The Secrets She Keeps and was even recognised at the gym. ‘It was quite surreal,’ she says.

Field Marshal Montgomery’s insistence on a full English breakfast wherever he went is said to have inspired ‘the full Monty’ expression.

But his granddaughter Arabella Montgomery could be left feeling short-changed by the will of her father.

I can reveal that the 2nd Viscount Montgomery of Alamein, who died in January aged 91, stipulated that his son, Henry, should receive twice the amount inherited by Arabella.

That’s an awfully big difference as his estate totalled more than £6.3 million.

Alice, 30, has accepted a proposal from fellow actor James Musgrave, 30, who’s appeared in hit dramas such as Death In Paradise, Silk and comedy Fresh Meat. 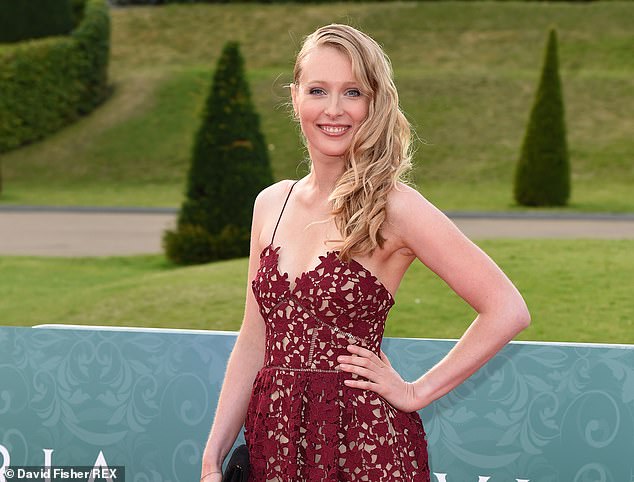 ‘Alice and I are absolutely thrilled to be engaged,’ James tells me.

An alumna of £38,000-per-year Heathfield School in Ascot, Alice is the granddaughter of Tory minister Lord Orr-Ewing, who was part of a team of three which built the first production television set while an apprentice at EMI.

The pandemic appears to have brought the pair together. ‘Having spent lockdown with my future in-laws, there will be no surprises,’ James jokes. ‘With all that has happened this year, it’s really exciting to have something to look forward to next year.’

Should you come to someone’s aid in this time of social-distancing?

Dame Helen Mirren cast health guidelines aside after wine was spilled on the jacket of a fellow guest at an awards ceremony in Italy this week.

The actress, who won an Oscar for her leading role in The Queen, immediately mopped up the stain, using mineral water and a napkin, on the outfit of comedian Aldo Baglio at the Flaiano Awards Gala evening in Pescara, Eastern Italy.

He declared: ‘She saved my life!’

This could be lively: the Marquess of Headfort, who memorably pushed his friend Lord Brocket into a swimming pool at the ex-jailbird’s South of France wedding, is tying the knot again himself.

Christo Headfort has got engaged to Chelsea lady Victoria Chapman. Jeremy Clarkson may be invited to the celebrations later this summer — Headfort is joint owner of the petrolhead’s Oxfordshire estate.

The Irish peer has never eclipsed his late father’s reputation for ebullient behaviour. The latter once hung a wine waiter in the Cavalry Club upside down by his ankles because his G&T was late.

He agreed to put the man back on his feet only when told that ‘staff are extremely hard to find at the moment’.

Cheers! Ellie and Eugenie first in line to hit the town

Chancellor Rishi Sunak would be proud… Princess Eugenie has been doing her bit to get London social life back on track.

She and her tequila salesman husband, Jack Brooksbank, joined their pal Ellie Goulding and the pop star’s other half, Caspar Jopling, for dinner at a restaurant this week. 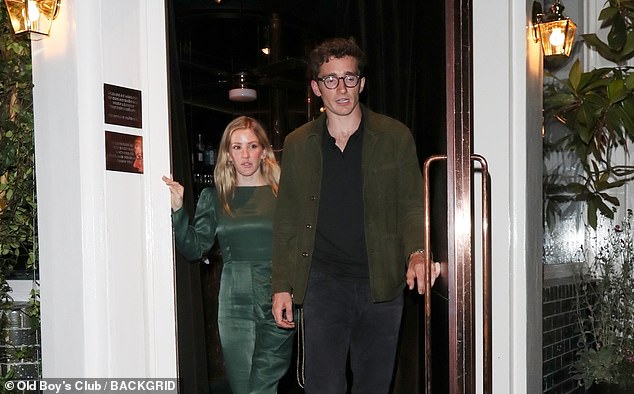 The Queen’s granddaughter and her friends dined at Notting Hill’s trendy Casa Cruz.

My man with the maitre’d’s ear says it’s not clear if they imbibed the eaterie’s £1,200 Tuscan wine or tucked into steak at £46.

Eugenie and Jack were among the guests when Ellie and Caspar were married at York Minster.

They are two British icons, but Dame Joan Collins and Marks & Spencer have gone their separate ways. 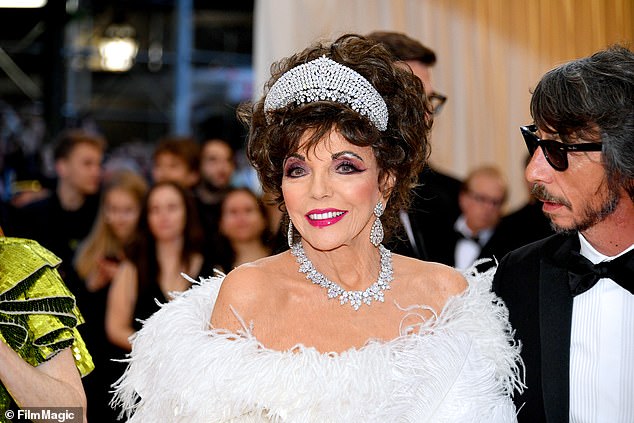 ‘The umbrella company that produced the line, Richards & Appleby, has had financial difficulties due in part to years of Brexit insecurity. As a result, it has been winding up many of its associations, which included us. Joan hopes a buyer will come along that has the ability to realise its full potential.’

However, Richards & Appleby denies Brexit was to blame. A spokesman says it has merged with another company, Prestige, which will continue to produce the collection and sell it online.

Children are priceless, but Keira Knightley’s maternity leave must have been Britain’s most costly.

I can reveal the actress’s fortune slipped by almost £1.6 million after she had her second child. 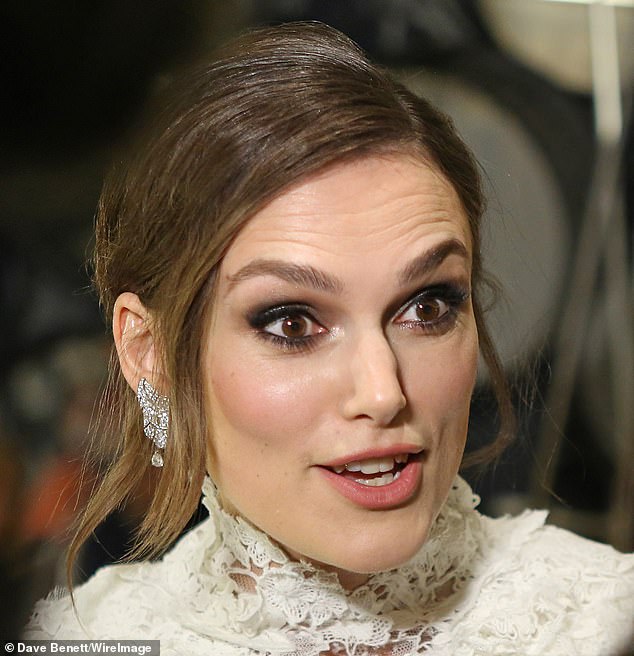 The Pirates Of The Caribbean star, 35, saw cash in her company KCK Boo drop to just over £8.4 million.

The period of the accounts covers her pregnancy and the birth of daughter Delilah.

As Peter Foster, the ex-conman behind the secret Blair property deal that shamed No.10, writes his bombshell memoirs, he’s already being brought to book.

I can reveal that a furious mother from Merseyside is planning to travel to Foster’s native Australia to confront him about two secrets from his past. Michelle Deakin, 50, first fell under his spell in the late Eighties when he picked her to help front a new weight-loss product he’d designed.

Then 19, she was collected in a Rolls-Royce and transported into Foster’s glitzy world.

But, unbeknown to her, Michelle had just become a part of his latest scam. Two years later, she was in the crown court dock receiving a six-month suspended jail term. Foster had long since vanished.

But Michelle wasn’t alone as she listened to the judge’s ruling. She was pregnant with what she now claims are Foster’s twin daughters. Now, she’s planning to confront him.

‘We’ve kept him out of their lives,’ Michelle says. I never wanted them to be involved in that lifestyle. They are happy, smart and have good careers.’ Foster denies being the girls’ dad.