BBC star Emily Maitlis once said she never felt sexier than when emerging from the icy waters of the lake in London’s Hyde Park.

But dog walkers in the Royal Park apparently don’t feel quite the same way about members of the Serpentine Swimming Club.

I can reveal that Maitlis and others, who get up at the crack of dawn to plunge into the murky lake, have been issued a stern rebuke over public nudity from the club president, Alan Mitchell. 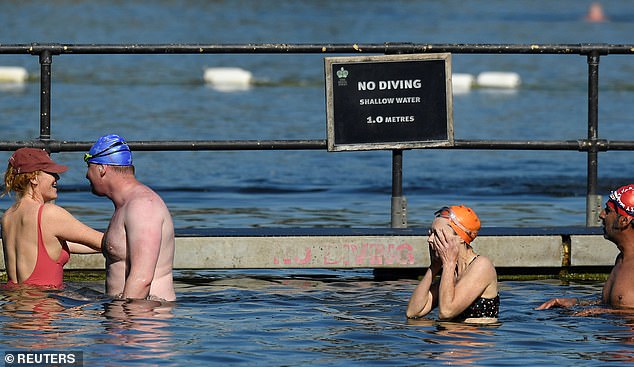 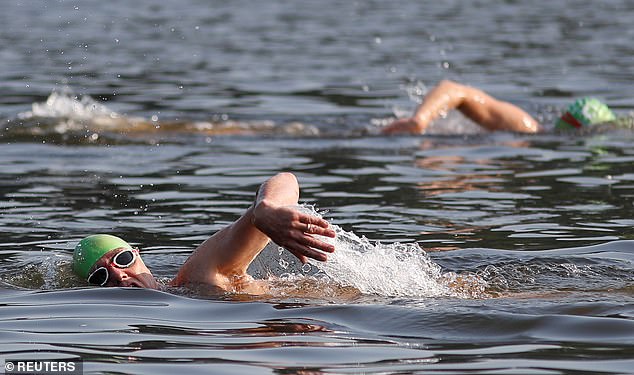 ‘Maitlis and others, who get up at the crack of dawn to plunge into the murky lake, have been issued a stern rebuke over public nudity from the club president, Alan Mitchell,’ writes RICHARD EDEN

The letter reads: ‘We pride ourselves on being a family-friendly swimming club and observe the rules and regulations of Swim England as far as safeguarding, health and safety. As such, we would like to remind all our members to dress appropriately while at the Serpentine during club hours.

‘Unfortunately, we have received complaints about intentional public nudity around the showers and on the beach, which is not acceptable and might show our club in a negative light . . . It also makes other members uncomfortable, which is not conducive of a pleasant swimming experience.’

This may alarm Maitlis, 51, who recently said of her chilly routine: ‘I feel at my sexiest when I look my worst — after a run and a swim in the Serpentine. The older I get, the more I prioritise fitness over beauty.’

Many members are likely to complain that it is difficult not to commit public nudity after a swim at the moment.

‘They’ve shut the changing rooms due to Covid,’ my man in the Speedos tells me. ‘There has been nowhere to change except in public since the pandemic started.’

Indeed, those who take to the cold lake have to change outside on the bank, as members of the public stroll past. My mole says those who want to change in privacy, particularly certain BBC stars, invest in costly £160 ‘dryrobes’ — large poncho-style towels — to change under.

Let’s hope the Duke and Duchess of Cambridge, who are known to walk their spaniel around the Serpentine, don’t have to reach for the smelling salts.

Natasha’s books are over the rainbow

Fashion designer Lady Natasha Rufus Isaacs is happily married to the Duchess of Cambridge’s ex-boyfriend Rupert Finch — but occasionally he brings her to book.

The Marquess of Reading’s daughter, 38, admits Finch strongly disapproved of her decision to display their books by the colour of their sleeves. 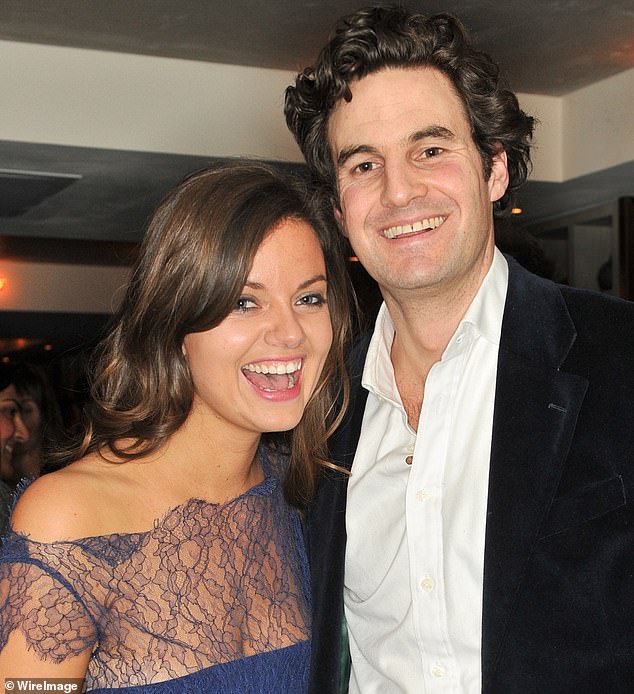 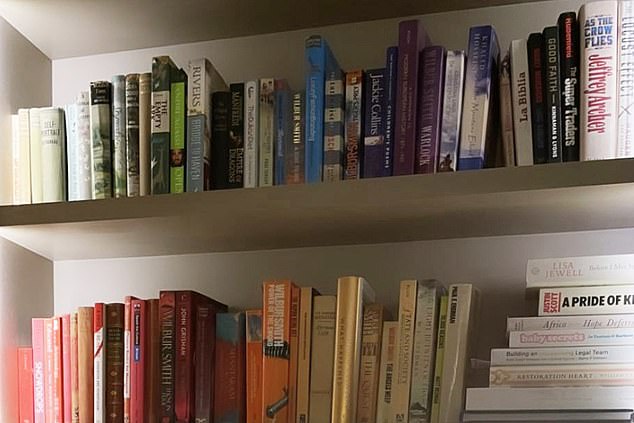 He asked her: ‘Why on earth are you turning our bookshelves into a rainbow? It looks really naff.’ She replied: ‘Because it’s pretty.’

Finch, 39, is a lawyer, so perhaps we need a judge to intervene?

Forget all the speculation about Idris Elba becoming the next 007.

What he really wants is to turn his character from the BBC crime drama Luther into a big-screen icon.

‘James Bond is a great character,’ says the 49-year-old star, who is shooting the first cinema version of Luther.

‘I’m trying to make my John Luther character fit into that space.’

Why Elle is walking on eggshells

Some say surviving in Hollywood is like walking on eggshells, but Elle Fanning has clearly cracked it. 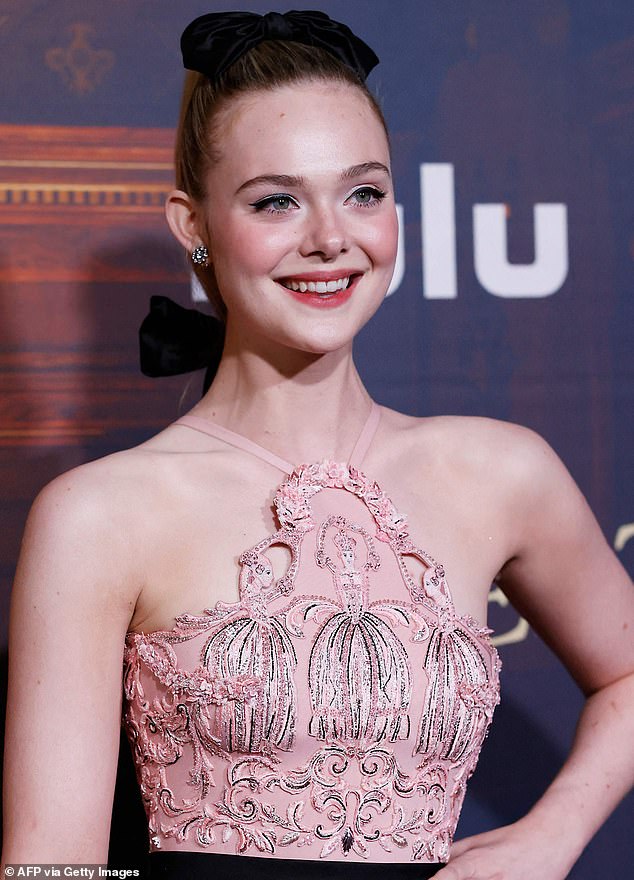 US actress Elle Fanning, 23, (pictured) has shown off a pair of unusual heels on her social media The 23-year-old star, who made her name as a child actress, showed off these outrageous stiletto heels, which have been crafted in the shape of a broken egg with a runny yolk, by the Spanish label Loewe.

Fanning, who is currently starring opposite British actor Nicholas Hoult in the second series of historical TV drama The Great, about Catherine the Great, describes her eccentric footwear as being part of ‘an egg-cellent outfit’.

‘I had a relapse,’ he tells me. ‘I thought I’d got better, but last weekend I took a complete dive. I felt really ill, and it was immediately identified as this horrible poisoning.’

Oddie, 80, disclosed last year that he was suffering from ‘lithium toxicity’ — an excess of the medication commonly used to treat bipolar and depression, both of which he has.

Speaking at a friend’s book launch party in Hampstead, he adds: ‘I’m just working on staying alive. I’m amazed I’ve turned up tonight and that I can talk.’

Celebrated West End haunt Langan’s attracted famous names including Sir Rod Stewart to its relaunch party, but rival chef Pierre Koffmann warns: ‘The prices may give you indigestion.’ Langan’s is selling sausages for almost £40 a time.

‘I’d be interested to meet the accountant who thought that £37 for bangers and mash was a bright idea,’ Koffmann remarks.

However, Langan’s insists: ‘The sausages are made with rare-breed pork, stuffed with a slice of fresh Foie Gras and wrapped in Caul fat.’

It’s certainly the wurst price for sausages I’ve ever seen.

Perry goes a bit loco at the station

WHAT do you wear to travel? A comfy tracksuit or your favourite jeans, perhaps.

The Turner Prize-winning artist turned up at Paddington Station, London, in this garish pink outfit. He suggests he did so as a retort to a passer-by who had previously told him that great painters concentrated on their work rather than their outfits.

Perry, 61, recalls: ‘Man comes up to me and says, “Caravaggio didn’t have to dress like that because he was a great painter”. That’s told me!’