Eden Project to go ahead with £17m geothermal ‘energy revolution’

By Sam Blanchard For Mailonline

The Eden Project has got the full £16.8million it needs to fund its geothermal energy ‘revolution’.

The attraction in Cornwall announced that it now has enough money to go ahead with plans to drill into the Earth’s core to extract power.

It will build a machine to send water almost three miles underground, where it will be ‘superheated’ by the Earth’s molten core and come back boiling hot.

This hot water will then be used to heat the famous ‘biome’ greenhouses and to generate electricity to power the other buildings and eventually homes in the local community.

Co-founder of the Eden Project (pictured), Sir Tim Smit, said: ‘Since we began, Eden has had a dream that the world should be powered by renewable energy’

‘Since we began, Eden has had a dream that the world should be powered by renewable energy,’ said the co-founder of the revolutionary site, Sir Tim Smit.

‘The sun can provide massive solar power and the wind has been harnessed by humankind for thousands of years but because both are intermittent and battery technology cannot yet store all we need there is a gap.

‘We believe the answer lies beneath our feet in the heat underground that can be accessed by drilling technology that pumps water towards the centre of the earth and brings it back up superheated to provide us with heat and electricity.

‘Now we have the green light and the funding to start drilling we are determined to make this technology work.’ 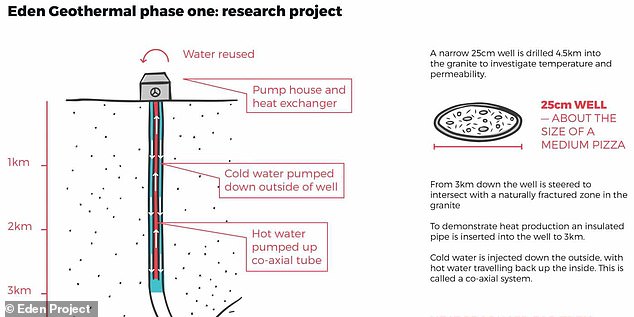 The geothermal energy project will work by pumping cold water into the ground so the warmth of the Earth’s core ‘superheats’ it, and then it can be brought back to the surface and that heat used to generate electricity 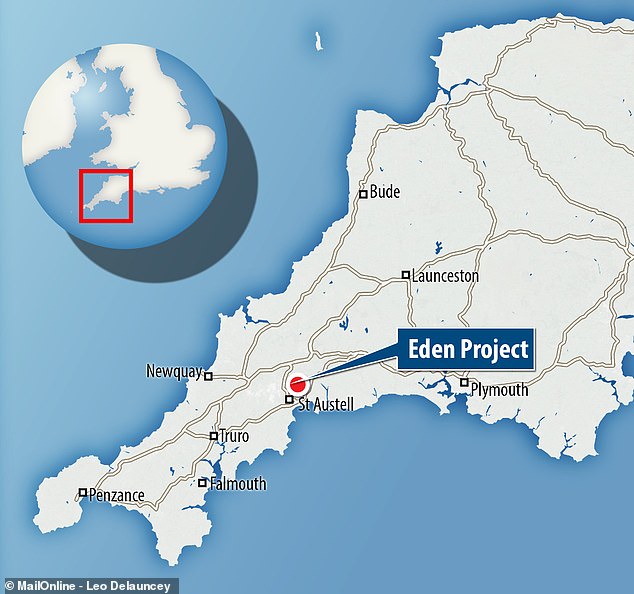 The Eden Project’s money has come from sources including the Government, the European Union, Cornwall Council and private investors

The money has come from sources including the Government, the European Union, Cornwall Council and private investors.

It will pay to dig a well 2.7miles (4.5km) deep and uncover the true extent of the resources beneath the site, which is near St Austell.

The well will only be about 10 inches (25cm) across – the size of a medium pizza – and cold water will be injected down it then pumped back up after becoming hot.

This hot water will then go into a heat exchanger, which can take the thermal energy and convert it into electricity to be distributed elsewhere.

It will be controlled by a new company, Eden Geothermal Limited (EGL), which has been set up especially.

Director of EGL, Augusta Grand, said: ‘It is great that we’re now getting going on this project.

‘Geothermal has huge potential to provide baseload heat and power on a very small surface footprint.

‘We look forward to being able to demonstrate the advantages of the technology to Eden’s one million visitors a year and encourage greater investment.’

Experts believe there is enough untapped energy in the granite below Cornwall alone to provide 10 per cent of Britain’s electricity.

Geothermal energy is produced by harnessing the heat from the Earth’s core, which is composed of solid and liquid parts and thought to be around 5,430°C (9,806°F).

To produce power from this heat, people must dig extremely deep wells (in excess of a mile underground) and pump water down them.

This water is then ‘superheated’ by the scorching heat inside the Earth and pumped back up, carrying the heat with it and producing steam capable of powering electricity-generating turbines.

There are three types of geothermal power plants: dry steam, flash and binary.

Dry steam is the oldest form of geothermal technology and takes steam out of the ground and uses it to directly drive a turbine.

And binary plants pass hot water through a secondary liquid with a lower boiling point, which turns to vapour to drive the turbine.