This is the dramatic moment a Deliveroo cyclist was thrown on to the roof of a car after a sickening head-on collision.

Daniel Smith, a physics student, suffered a cracked spine and head injuries in the crash, which happened on Saturday evening in Edinburgh.

The driver of the car, which was a Nissan Note, turned right and ploughed straight into Mr Smith, apparently not spotting the cyclist in the rain.

The shocking footage was recorded by the dashcam of another vehicle that was waiting at a set of traffic lights.

In the clip, Mr Smith crashes into the front of the car at speed and is hurled on to the roof, ending up on his back.

He can be seen flailing on the roof of the vehicle before he slides, head-first with his legs in the air, down onto the road.

As the cyclist picks himself up and doubles over in pain at the side of the road, the driver and her passenger get out of the car to check if he is okay.

The footage, obtained by Scotland’s Worst Drivers, sees Mr Smith with his hands on his knees as the driver speaks to him.

A passerby comes over to help Mr Smith take the bike off the road as the driver and her passenger return to their car. 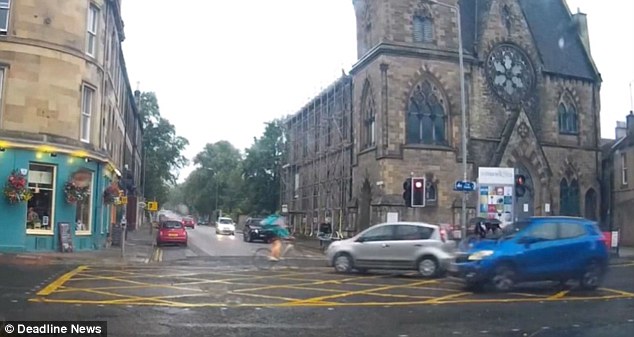 The cyclist later went to hospital on Sunday where he was diagnosed with a cracked coccyx bone and a minor head injury.

He said: ‘I was actually on my way to pick up another delivery after just finishing my last delivery down the road.

‘Sitting down hurts a lot and there is nothing they can do about it when I’m doing my resit exams, so I’m in the process of looking at special circumstances for my exams as I’m so shaken by the accident and my head is everywhere.’

In a Facebook post, Mr Smith urged drivers to always to be on the lookout for cyclists. 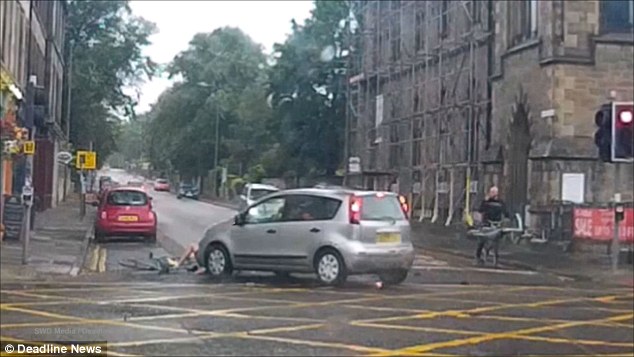 After flailing on top of the car, Mr Smith slid down head-first before painfully landing on the road

He said: ‘A reminder for me how vulnerable cyclists are cycling in a city. And if there is anything anyone can take from this is, just please look for cyclists when you are driving.

‘Luckily I’m ok and heading to hospital now, but it could have been much worse for me!

‘Obviously I’m not going to be able to work for a while now so for me the impact is much greater than just a bump and a scare.’

The cyclist, who is also a physics student, suffered a cracked spine and minor head injuries in the collision

People shared their sympathy for Daniel on social media.

Matt Thompson commented: ‘Hope your ok Dan, can see you were able to get up after. Cyclists so vulnerable on the road, felt it myself when I rode to work and back. Get better soon.’

Suzy Goodall wrote: ‘This is why I don’t like cycling – too many f***ies on the road.’