The first time Victorian painter Edward Burne-Jones had a major retrospective at the Tate, in 1933, the exhibition was opened by the leader of the Conservative Party, Stanley Baldwin. Now Burne-Jones, last of the Pre-Raphaelites, is back, though Theresa May is possibly too busy to take in an occasionally overwhelming show by the painter whose faux medieval fantasies had a profound effect on Rudyard Kipling and J R R Tolkien.

Over seven rooms there are scores of cartoons, sketches, paintings, tapestries and decorative pieces. These include part of the piano Burne-Jones decorated for his new wife Georgiana with the scythe-carrying figure of Death and, for the first time in public, the Perseus and Briar Rose cycles.

Violence is seldom far away and there is so much armour in this show it clanks. Only the men at arms in Briar Rose – his intoxicating, highly stylised retelling of Sleeping Beauty – are silent, lost in a drowsy world of creeping thorns and tendrils. 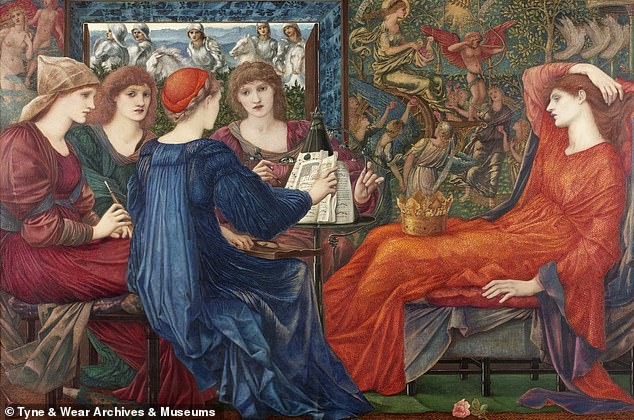 In Laus Veneris, 1873-75 (above), Venus is literally a scarlet woman, dressed in vivid red and emitting a languid sexual energy. It was inspired by an Algernon Swinburne poem

The figures show Burne-Jones’s debt to his hero Michelangelo (he once spent a day on his back looking up at the ceiling of the Sistine Chapel through opera glasses) and, in the pale, slightly sinister Sleeping Beauty in the series’ final painting, his abiding belief that women are inherently dangerous creatures.

Just how dangerous becomes apparent in the room of big, bravura exhibition works from 1877 onwards that made Burne-Jones’s reputation, electrifying London and then Europe.

In Laus Veneris, Venus is literally a scarlet woman, dressed in vivid red and emitting a languid sexual energy that will overpower the knights gathered at her window. Nearby, The Beguiling Of Merlin, where the wizard finds himself trapped and powerless before Nimue, the spell-weaving Lady of the Lake, has all Burne-Jones’s decorative appeal but is also a work of real psychological depth.

Burne-Jones was closely involved with the revival of stained-glass art, and his work can be seen in churches around England.

Burne-Jones created this world of classical mythology and Arthurian legend to escape the world he was already in. Born in 1833, he was a Birmingham boy who came of age just as the Industrial Revolution was blotting out what was left of the city’s greenery.

He fled to theology and Oxford, where he met the like-minded William Morris, and then abandoned religion for art when he apprenticed himself to Dante Gabriel Rossetti, founder of the Pre-Raphaelite Brotherhood.

Rossetti declared young Burne-Jones’s intricate ink drawings, like the dizzyingly busy Buondelmonte’s Wedding, on display with early drawings, ‘unequalled by anything unless perhaps Albrecht Dürer’s finest works’. That’s laying it on thick, but Burne-Jones, the anti-capitalist visionary who became a baronet, always attracted hyperbole. English conservatives were appalled by his eroticism, the French thought he was a genius.

The irony is, it’s the contemporary portraits that Burne-Jones painted privately for family, friends and his great love Frances Graham that emerge from the briars and quietly bewitch.

Restrained and intensely personal, this is genuinely moving art but, 120 years after his death, I sense it’s Burne-Jones’s knightly vision that has the strongest pull.

Hopefully the Tate shop has stocked up on Merlin tote bags – this one is going to be big.