Dark matter could be forging strange cold stars in deep space – and they may be responsible for a recent spate of ‘alien’ signals picked up on Earth.

The elusive material – which makes up 80 per cent of our universe but has never been observed – could be clumping together into ‘cold stars’, a study suggests.

These stars may be behind the mysterious ‘fast radio bursts’ detected by radio astronomers across the globe.

Currently, these strange signals have no known source, and some had suggested they were messages sent by extraterrestrials.

The research comes from a team of scientists at the Institute for Nuclear Research of the Russian Academy of Sciences in Moscow.

Their computer models simulated how dark matter may interact around the edges of dwarf galaxies – the smallest galaxies in the known universe.

The simulations showed that dark matter may clump together into cold, unseen ‘Bose stars’ within a galaxy’s halo – the ring of gas and dust around its outer edge.

It is thought the material can clump together into something called a Bose-Einstein condensate. 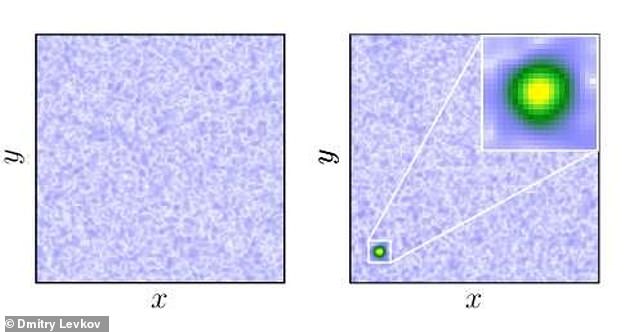 Scientists suggest gas particles around dwarf galaxies mix to produce invisible ‘cold stars’. Pictured left is a simulation of the initial moment of this process, when the gas is mixed. Right shows the moment shortly after the formation of a Bose star. The colour indicates density: White-blue-green-yellow, from sparse to dense

Astronomers know it to be out there because of its gravitational effects on known matter.

Dark matter is a hypothetical substance said to make up roughly 27 per cent of the universe. It is thought to be the gravitational ‘glue’ that holds the galaxies together (artist’s impression)

The material is thought to be the gravitational ‘glue’ that holds the galaxies together.

Calculations show that many galaxies would be torn apart instead of rotating if they weren’t held together by a large amount of dark matter.

Just five per cent the observable universe consists of known matter such as atoms and subatomic particles.

When temperatures sit just above absolute zero, quantum particles lose the energy to mix and wobble, leaving behind a uniform dark ‘slush’.

Individual quantum particles become uniform and clouds of them are drawn together by gravity to form superfluids.

The new study suggests Bose-Einstein condensate forms in the halos of dark galaxies, and they could form in a timespan shorter than the lifetime of the universe.

If they exist, Bose stars may be responsible for mysterious signals known as Fast Radio Bursts that have baffled scientists for decades.

WHAT ARE FAST RADIO BURSTS AND WHY DO WE STUDY THEM?

According to the scientists, dark mark can interact with electromagnetic fields and decay into radiophotons.

These then travel billions of miles where they are picked up by sensitive equipment on Earth.

‘This effect is vanishingly small, but inside the Bose star, it may be resonantly amplified, as in a laser, and could lead to giant radio bursts,’ they said.

For now, the team is looking for a way to detect and quantify these invisible stars.

‘The next obvious step is to predict the number of the Bose stars in the Universe and calculate their mass in models with light dark matter,’ Dr Levkov said.