They, alongside a stack of red Solo cups, several cereal bowls with spoons still in them and an empty microwaveable popcorn bag, are items that could be on a kitchen table in student housing anywhere in the country.

But these articles – shown in exclusive DailyMail.com pictures – represent the minutiae of the lives of five girls who until just 18 days ago were enjoying life sharing a home close to their University of Idaho campus.

Now three of them and one of their boyfriends are gone, leaving behind the objects of their everyday existence that now are on view through the windows of 1122 King Road, Moscow.

And as cops prepare to turn over the house where Kaylee Goncalves, Maddie Mogen, Xana Kernodle and Ethan Chapin lost their lives back to its landlord, the home is frozen in time – albeit it from less than three weeks ago.

DailyMail.com pictures show the inside of the home in Moscow, Idaho, where four students were murdered. A neon sign that reads ‘Good Vibes’ can be seen through the window 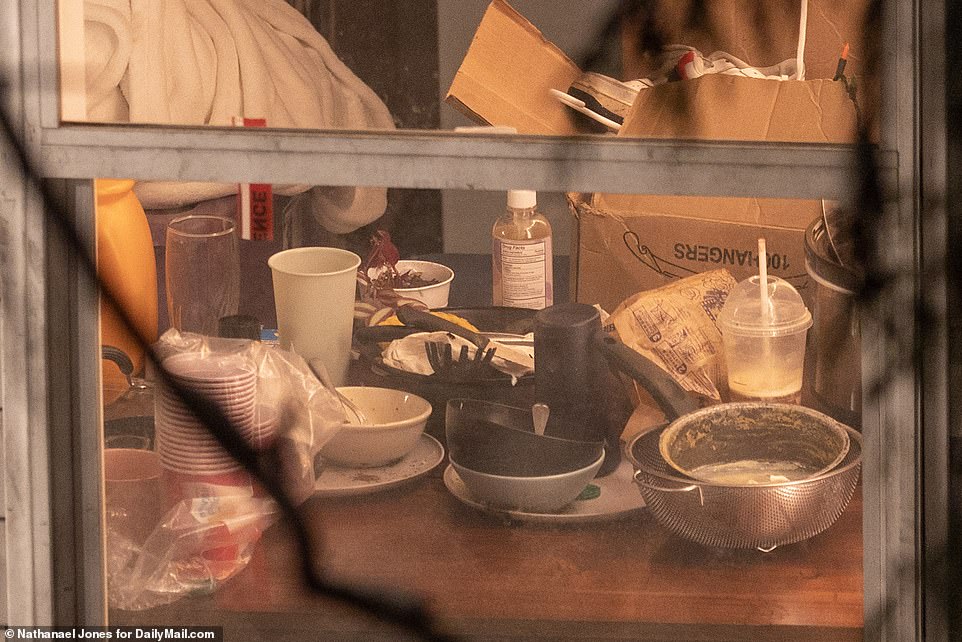 A stack of red Solo cups, several cereal bowls with spoons still in them and an empty microwaveable popcorn bag are pictured still in the house 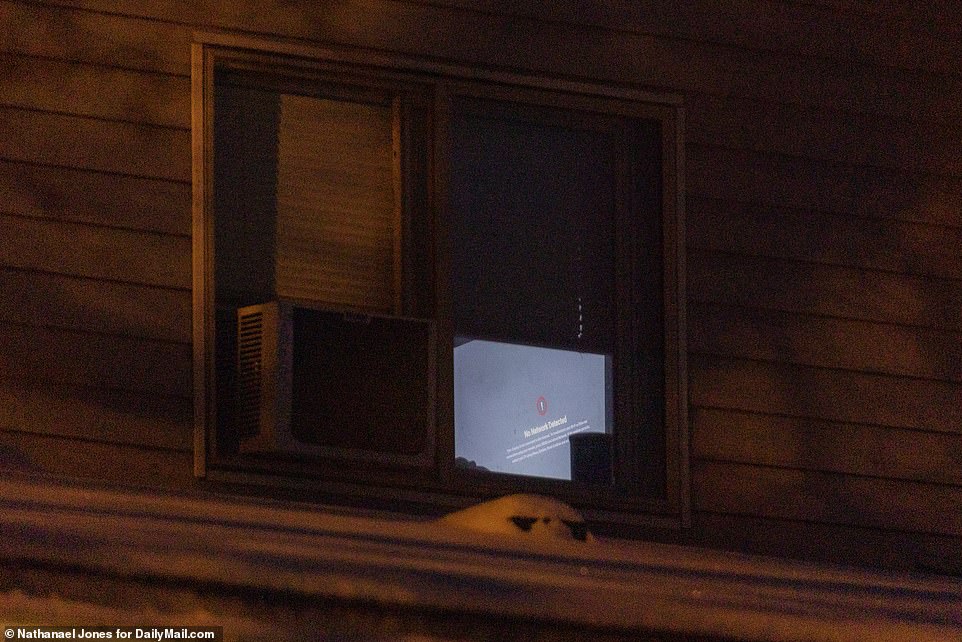 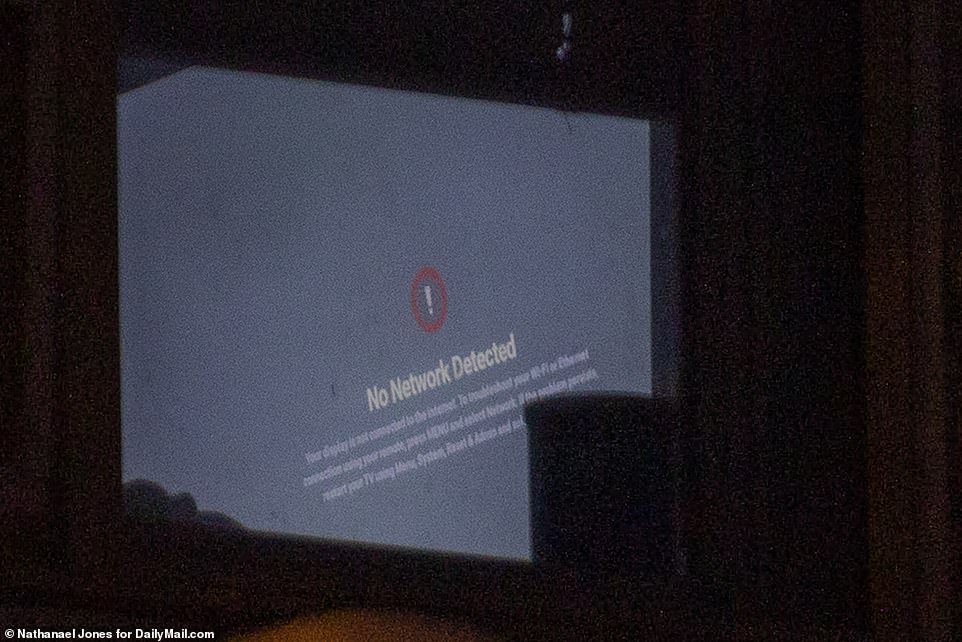 While dozens of investigators have traipsed through the three-story home in the past days, no one has switched off the monitor 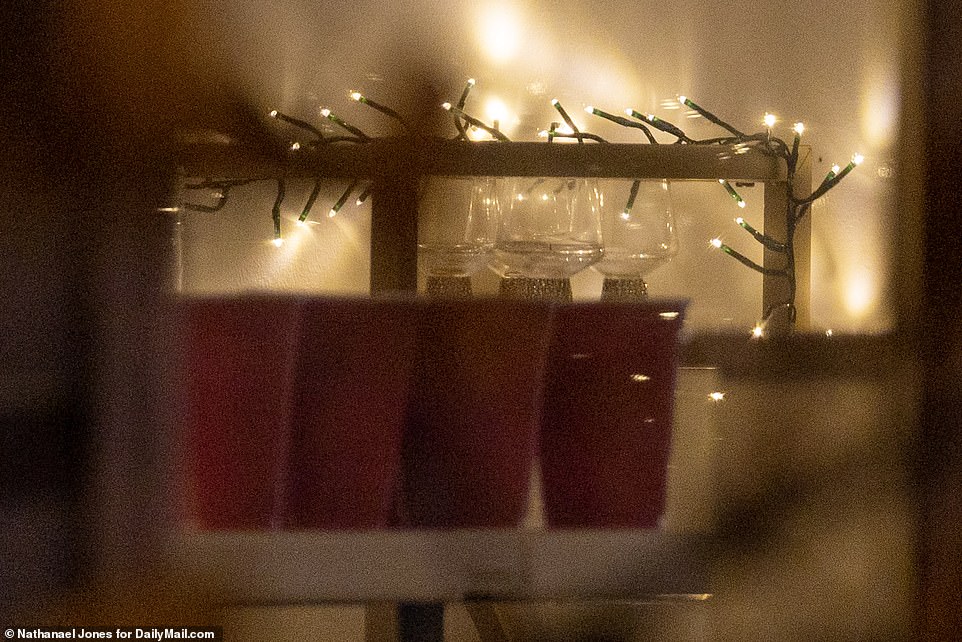 At night the house is lit by an eerie glow coming through the top floor where Kaylee, 21, lived and died.

It emanates from a computer monitor in her bedroom, that, despite the dozens of investigators who have traipsed through the three-story home in the past days, no one has switched off. 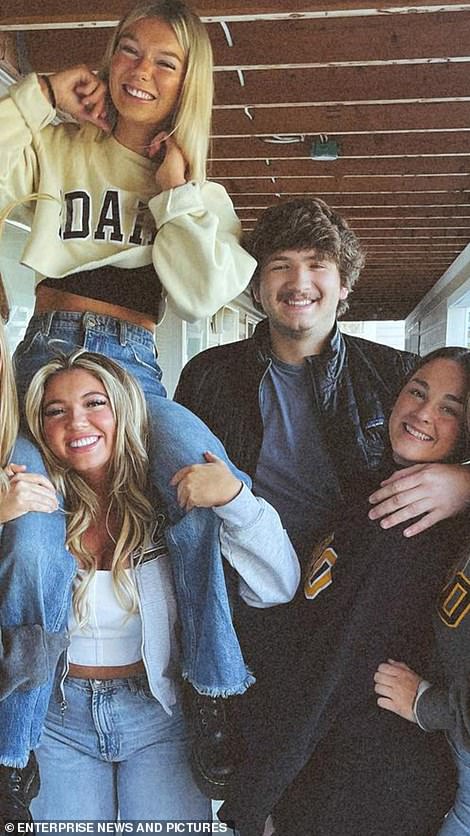 On the screen, visible through the window, are the words ‘No Network Detected’. The computer to which it was attached is in the Moscow Police Department custody as investigators hope it will help them find the depraved killer.

Kaylee, Maddie, 21, and Xana, 20, lived in the home with 19-year-olds Bethany Funke and Dylan Mortensen, who were spared during the attack. Ethan, 20, was visiting his girlfriend Xana when the killer struck.

The house where they died was known locally as a party house. Hints of that can be seen through the window to the main living area.

A row of red Solo cups is lined up on a white plastic table – a sure sign of beer pong parties.

Also on the table is an empty Bud Light lime beer bottle, a potato chip bag and a blue serving bowl.

On the back wall hangs a garland of artificial greenery complete with a ‘Good Vibes’ neon sign that remains illuminated.

A pink pastel abstract painting – clearly a girls’ touch – hangs on another wall.

Underneath the painting stands a console table with holiday lights wrapped around it showing the students had their minds already on Christmas, even though the murders occurred 11 days before Thanksgiving.

The house is still cordoned off by yellow police tape. But the search inside has largely ended.

The house has given up whatever secrets it has as cops are no longer trudging through it, although they stand guard outside night and day.

Police have announced no suspects and have not found the murder weapon despite an intensive search.

Five snow-covered vehicles that had stood outside the house were towed to ‘a more secure long-term storage location on Tuesday. There, officers will ‘continue processing evidence’ Moscow cops said.

Police continue to insist the four students were the victims of a ‘targeted’ killing, but cannot – or will not – say which one was the intended victim.

According to investigators, Maddie and Kaylee had been out at a bar and a food truck before returning home at about 1:56 am that Sunday.

Xana and Ethan had been at a fraternity house and returned home about the same time. Their other housemates, got back about 45 minutes earlier. 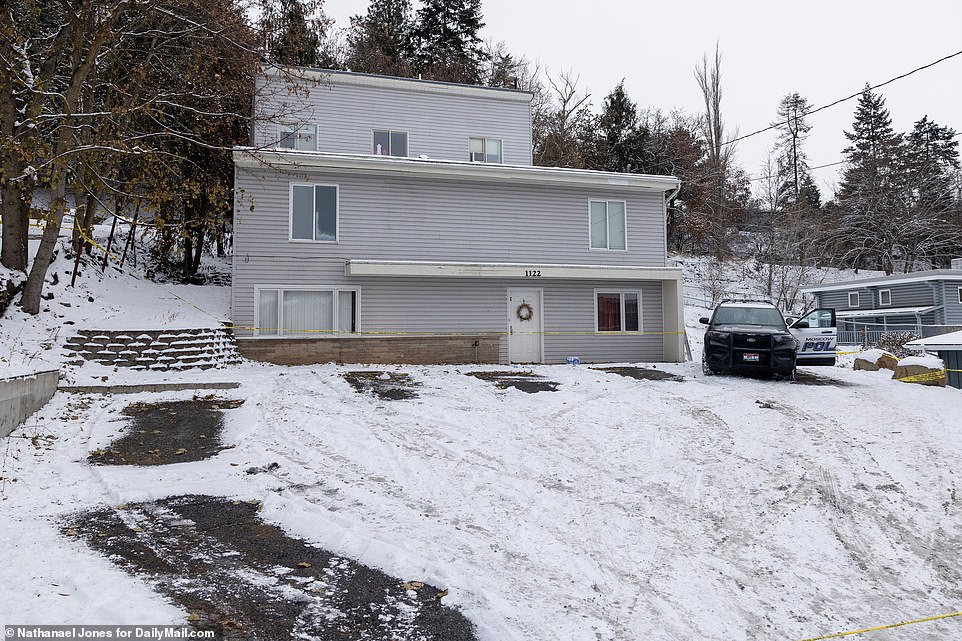 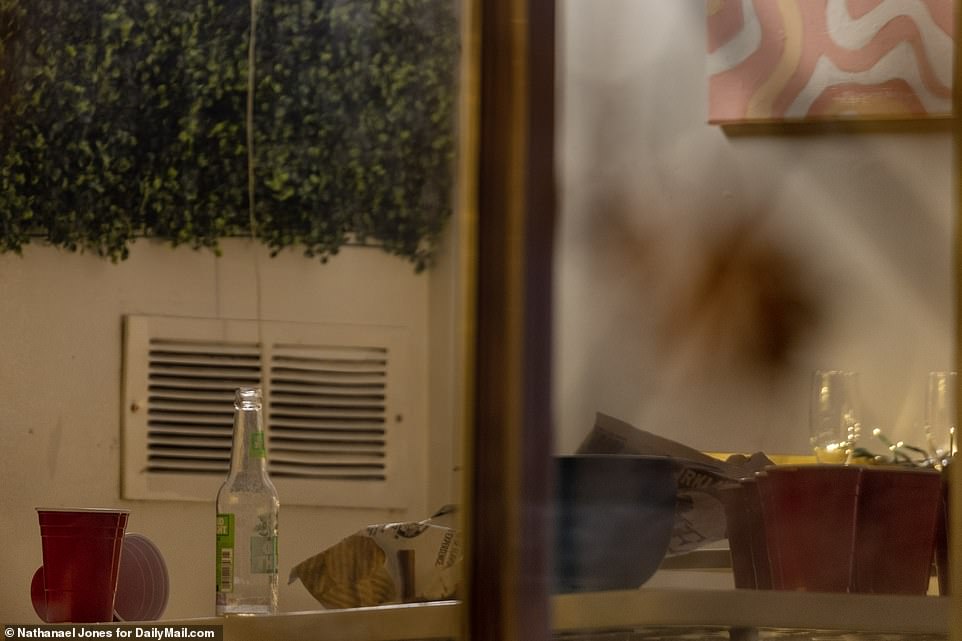 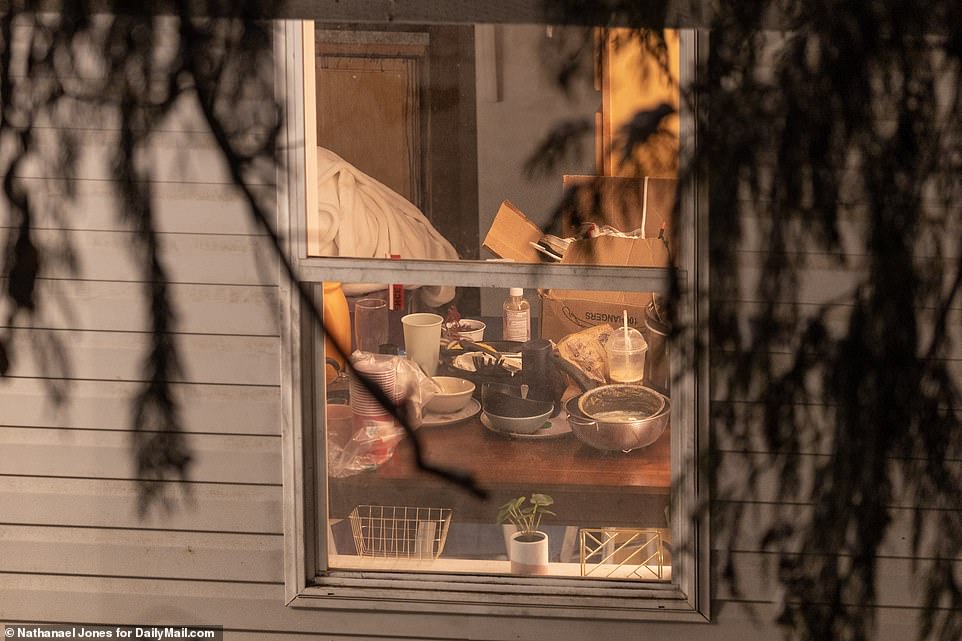 As cops prepare to turn over the house back to its landlord, the home is frozen in time with remnants of those who lived there

Just before noon, a 911 call from the house reported an unconscious person; it had been placed from the phone of one of the housemates. Officers found the four students dead, two on the second story and two on the third.

The call apparently came when Kaylee and Maddie’s friends were not able to reach them after incessantly calling and texting their numbers.

The two girls were found in their beds on the top floor of the house, with cops maintaining they were still asleep when the unknown assailant stabbed them with a knife. At a vigil on Wednesday night, Kaylee’s father Steve Goncalves revealed his daughter and Maddie died in the same bed.

Goncalves has spoken out about his frustration with the slow investigation and revealed why he didn’t give his daughter a funeral.

‘My wife’s biggest fear, part of the reason we didn’t have a funeral, is because she couldn’t be guaranteed that that monster was going to not be there,’ he told Good Morning America.

Goncalves said he had learned that his daughter did not suffer in her final moments, but did have ‘large punctures’ from a ‘brutal weapon’ that police say the killer was ‘proud of.’

‘The detective said this weapon is probably something [the killer] paid money for and something that they’re proud of,’ he said. 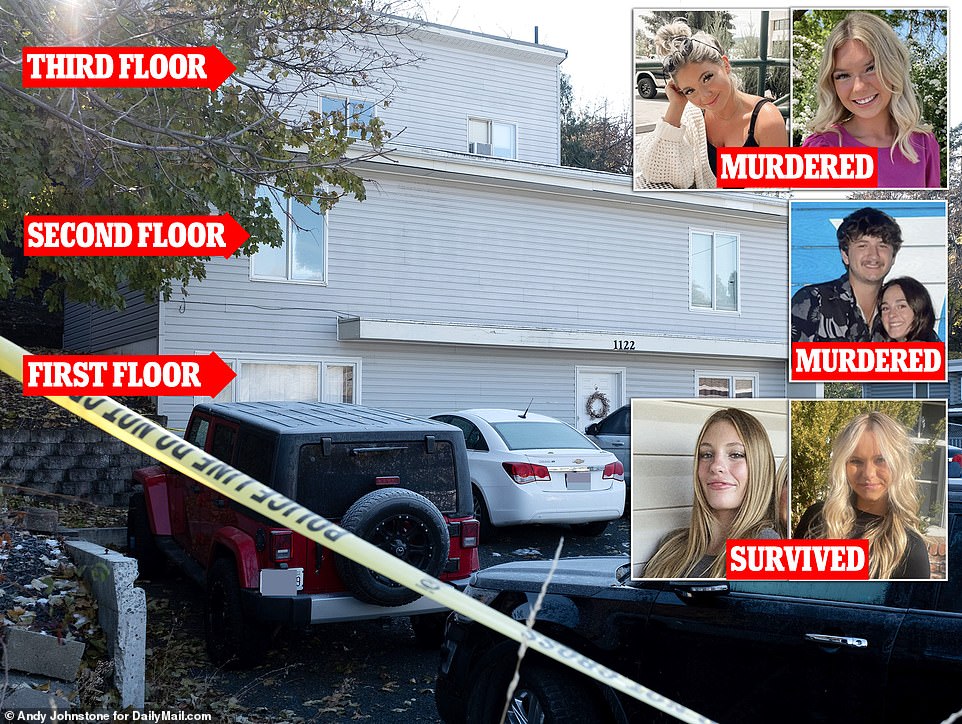 Kaylee and Maddie were found on the top floor of the Moscow, Idaho home. College lovers Ethan Chapin and Xana Kernodle were found in a second-floor bedroom while survivors Dylan Mortensen and Bethany Funke were sleeping on the first floor 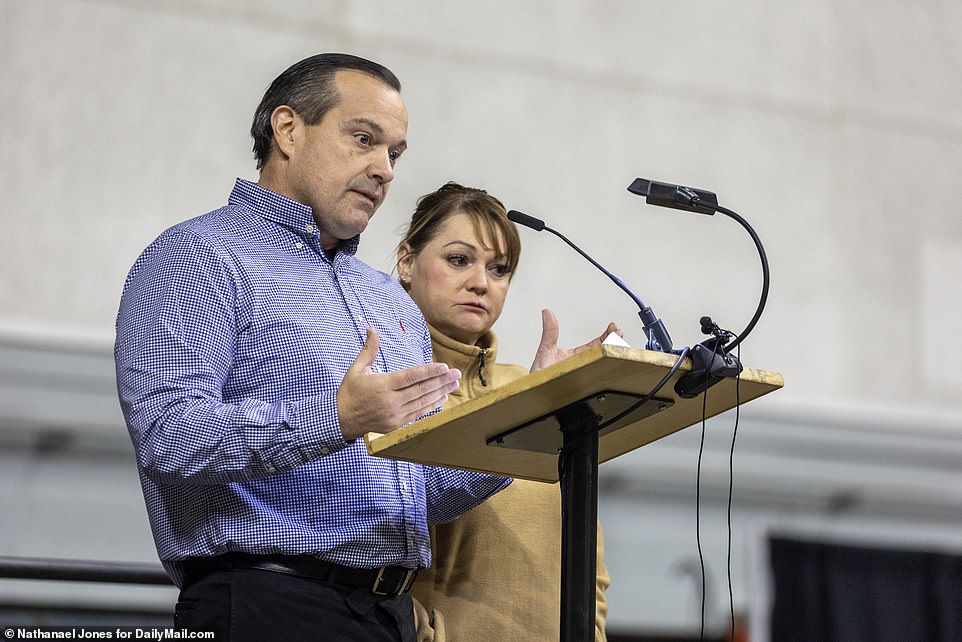 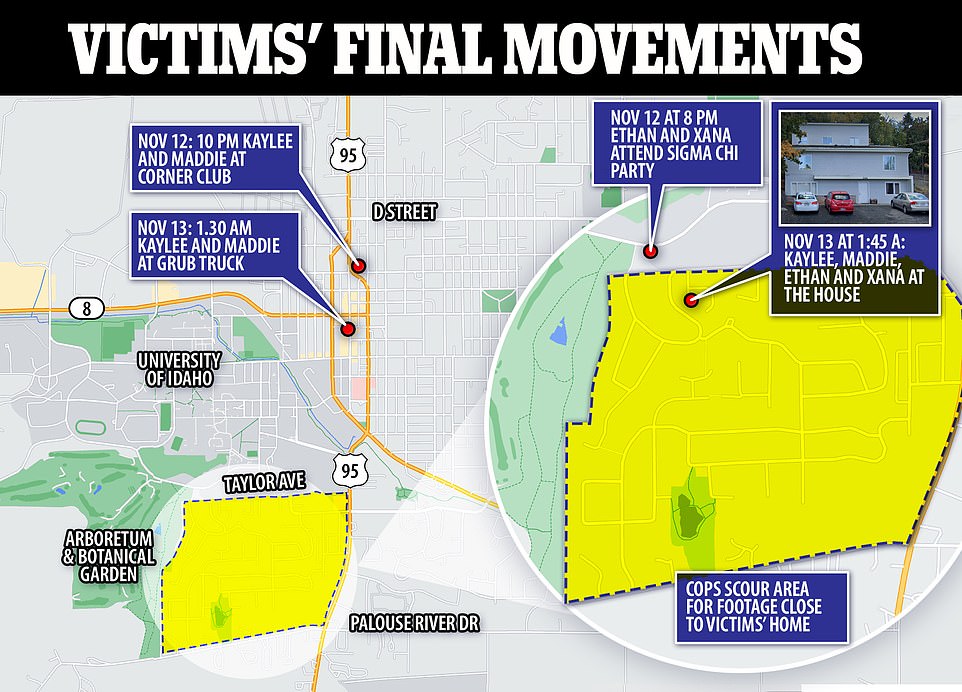 Goncalves previously told FOX News’s Lawrence Jones how he had not heard anything from law enforcement since Wednesday at 5pm — the same night local authorities gave a disastrous press conference in which they admitted they have no suspects in her and her friends’ murders and have not yet recovered a murder weapon.

‘They’re kind of just telling me that they can’t tell me much, which is frustrating to me because I’ve been very trustworthy,’ Goncalves said of the investigators, revealing: ‘I do know things, I haven’t shared things.’

Goncalves said he does not want to talk badly about law enforcement because they are ‘hardworking individuals,’ claiming he would be ‘doomed’ without them.

Police say that they are not releasing a profile of the suspect because it could lead to more fear and suspicion in the college town, which is already on edge following the gruesome murders, with some students refusing to return to classes.

‘It will potentially put more fear, more suspicion on a wide variety of people versus if we use that to really refine where we’re at in our investigation,’ Idaho State Police communications director Aaron Snell told Jones. ‘I think that will be more pertinent.’

‘And so if we just provide information to the public, I just don’t think that that’s going to be a wise choice.’

He asked anyone with information about his daughter’s whereabouts the night of November 12 and into November 13 to come forward and speak to law enforcement officials, saying they may provide the missing key to helping unravel the mystery.

Kaylee and Maddie had spent much her last night at the Corner Club — a Moscow dive bar popular with students. 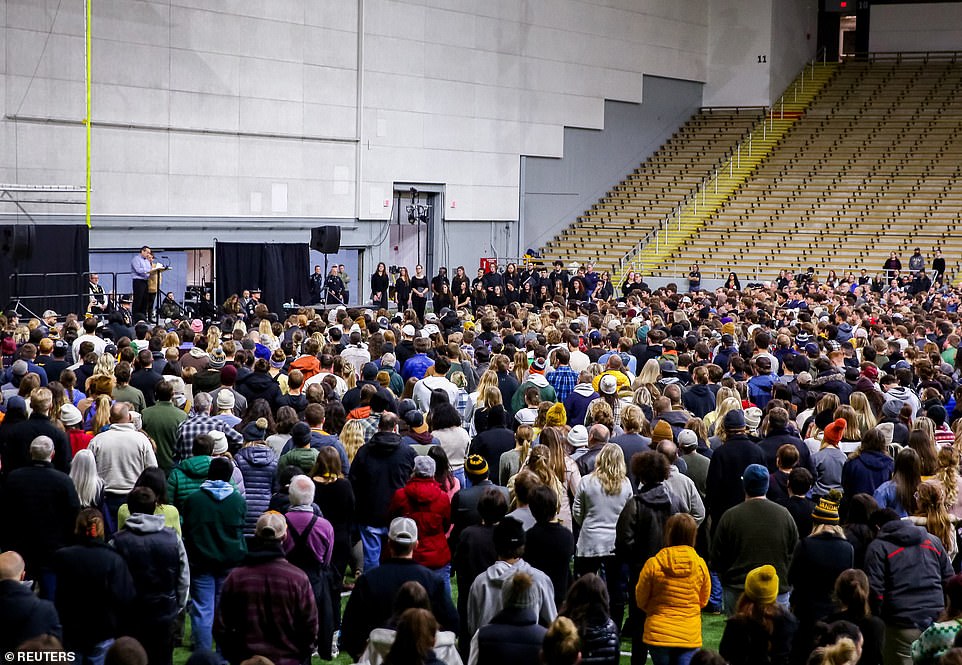 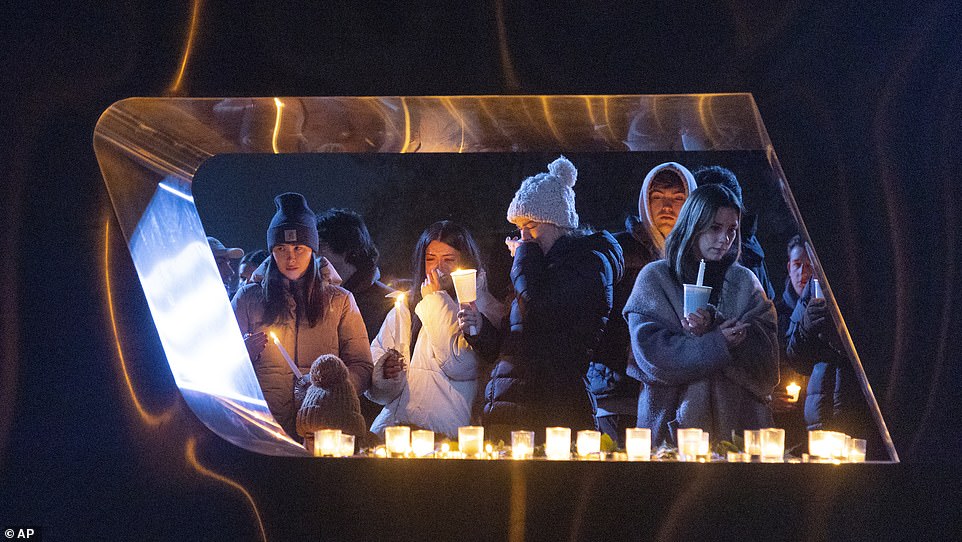 Around 1.30am, the pair were caught on camera purchasing a portion of carbonara pasta from Grub Wandering Kitchen – a food truck that offers late-night eats on weekends.

Parked up close to the Moscow branch of insurers State Farm and outdoor store Hyperspud Sports, Maddie and Kaylee were last glimpsed walking away towards what police have called ‘a private party driver’ for their final ride home.

The route takes less than five minutes to complete and cuts through the University of Idaho campus and passes the Sigma Chi house on the right where Xana and Ethan were at a party.

According to police, the pair arrived home at 1.45am – at the same time as Ethan and Xana and 45 minutes after Dylan and Bethany, who both survived the attack.

Less than two hours later, Maddie, Kaylee, Xana, and Ethan were dead – butchered as they slept by a knife-wielding villain.

Autopsy results showed all four died from stab wounds to the chest, with police saying the murder weapon was a large military-style knife which still hasn’t been found.

Kaylee’s dog Murphy survived the attack unscathed and didn’t make a sound, while the first Dylan and Bethany knew of their roommates’ fate came after 11am when they woke up and went upstairs from their ground floor bedrooms to find the scene of carnage.